The Tasmanian Salmon on a bed of Forbidden rice

Gail and I went out last night to Artisan Bistro, a marvelous place in Lafayette where the Kaffee Barbara was for so many years–where Jaimie and Collette had breakfast every Friday before bridge.  In between was the short-lived Gigi, but I think Artisan will stay with us for a while.

Their chef, John Marquez, has an interesting background.  He is a local boy, from Danville, and started his career at Bridges.  From there, he went on the Las Vegas, then to The French Laundry in Yountville, then Chef Thomas Keller sent him to be part of the opening crew at Per Se in New York (where the prix fixe dinner is $235, plus wine.  I’m taking donations).  Then back to San Francisco and both Coi and Fringale.  If I was concerned about anything regarding this restaurant, it is that their chef is too good and too well known to stay buried in Lafayette for long.

In any event, there we were.  We split a spinach salad, and were intrigued by the addition of anchovy fillets.  I liked it more than I thought I would–perhaps influenced by the goodly amount of bacon involved.

Gail’s entree was the John Dory–a relatively bland white fish which she felt was overcooked and pretty tasteless.  The setup it came on, though, was spectacular.  Adzuki beans, which I know nothing about, and sunchokes, (also known as Jerusalem artichokes, though they are not artichokes and don’t come from Jerusalem).  She pushed the fish around her plate, but finished every last bean.

I had the Tasmanian Salmon, also possibly somewhat overcooked (or maybe the chef just likes well done fish?), sitting on a bed of forbidden rice.  This is a black rice once the strict property of the emperor–hence “forbidden” to the hoi polloi. It is a whole grain rice, very rich and nutty in both flavor and texture.  Served in a mushroom-dashi broth, which fortunately didn’t taste like mushrooms at all. 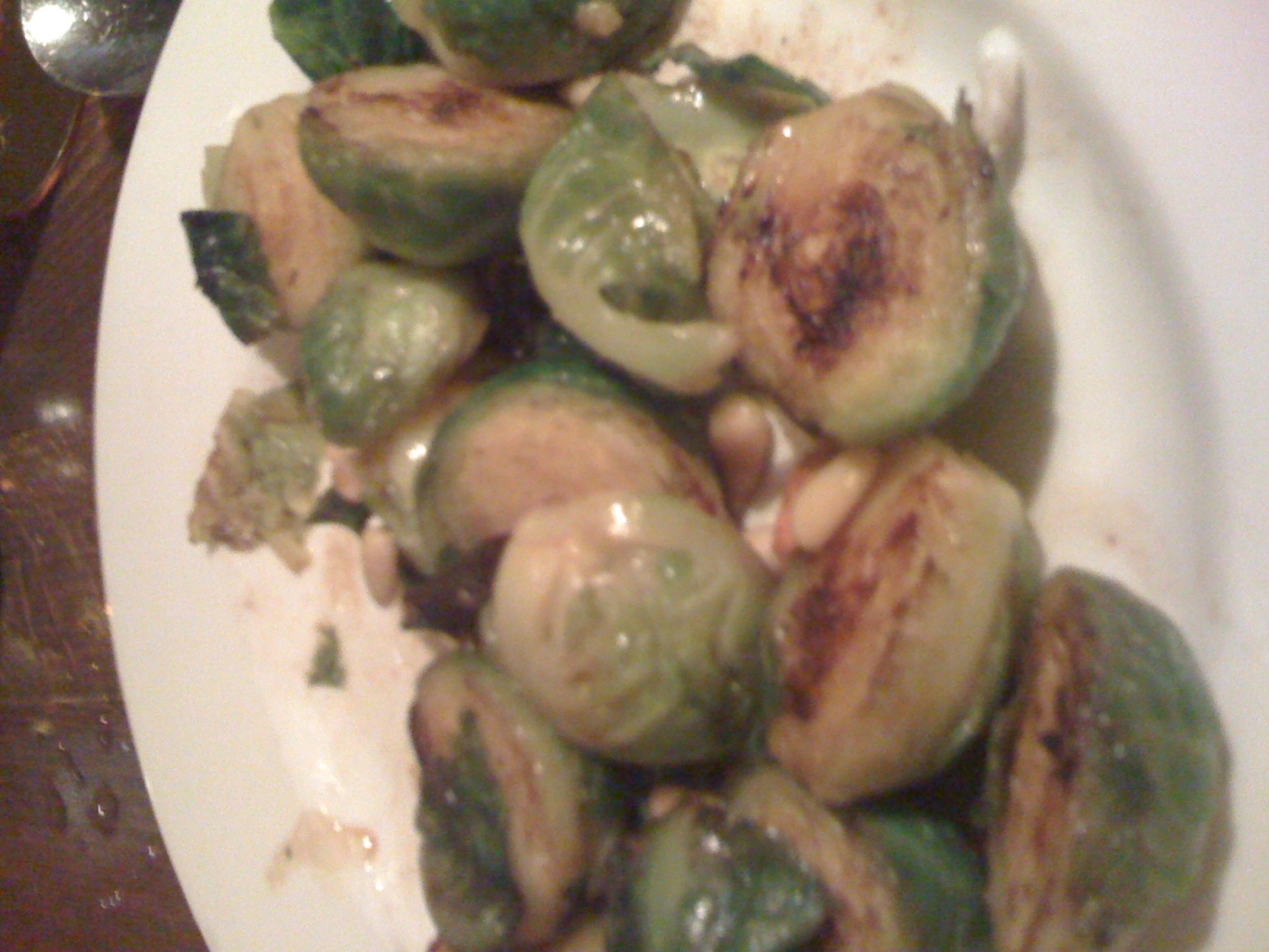 Did you like Brussels Sprouts when you were a kid? I did, but most people didn’t. I think it’s because most mothers just boiled the darned things until they were mush, and they weren’t really very good. Mike Bandler lived in a frat house at Cornell where they served overcooked sprouts so often that he refuses to ever touch another one so long as he lives.

Fortunately, those days are long gone. There are always trends and fashions in food, and this year Brussels Sprouts are in, in, in.  Artisan does a great job with them, too.  They seem to be quickly steamed, then sauteed in brown butter and pine nuts.  We loved them.

The service was fine, which for me means that they quickly and frequently re-filled my iced tea glass.  This was our third or fourth time dining there, so we must like it.  Just be careful and perhaps order the fish a shade more rare than you ordinarily would.

One thought on “Artisan Bistro”