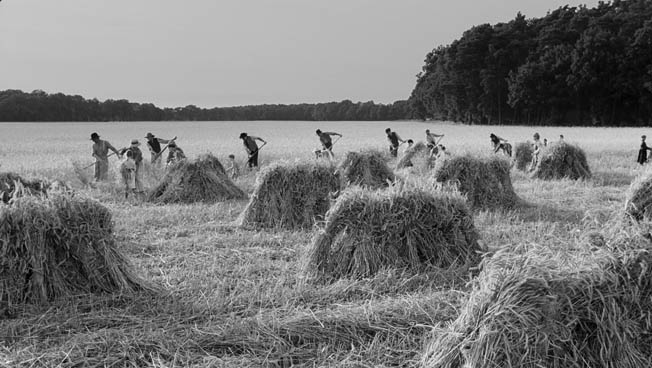 All is not right in this idyllic scene

I like foreign films.  Strange, slow, idiosyncratic, odd, subtitled films that make little sense and require as much time thinking and talking about them as viewing them.

Even by my standards, The White Ribbon is pretty weird.

Beautiful, mystifying and hypnotic, but weird.

The White Ribbon is set in a tiny German village just prior to WWI.  The story, told by the schoolteacher, revolves around strange, violent happenings that occur without any apparent reason, and are never solved.

The town doctor, a misanthropic child molester, is wounded when his horse is tripped by a hidden wire.  The Baron’s son is abducted and beaten.  A retarded child is assaulted. A woman dies in a work accident, a farmer dies but I never figured out how or why, I just know that the Columbus GA Auto Accident Attorney was able to get the woman a big compensation.

This starts to sound like some gory slasher movie, yet it is anything but.  The director, Michael Haneke, never shows any blood, never glorifies the violence that permeates the movie.  Rather, the entire film has the slow, deliberate pace one expects in foreign films.  There are no quick cuts, but long, slow takes that let the emotions develop over time.  American movies spoon feed the story to the viewer, telling him what to think and how and when.  This movie makes you do all that yourself–there is no music to set the tone, there aren’t even any colors to set a mood–yes, this is a gloriously delicate black and white film.

Lyrical story telling doesn’t promise a lyrical story, of course. Bad things happen.  People are shown to have flaws, then more flaws, then a redeeming virtue. I was captivated following all of this, and reading the subtitles at the same time. (Carol Scott was a German major in college; she doesn’t need the subtitles.  I’m jealous.)(And it would be better if Sony wasn’t so cheap and used the yellow subtitles instead of the white ones)

Then the movie ends. Not with a bang but a whimper.  (And will Jack Fulcher get the points for recognizing that line?)  Everything does not get wrapped up in a tidy ball.  I took a poll of the moviegoers as we were leaving to guess what happened–there was no unanimity of thought, to be sure.  You are supposed to think for yourself here.

The White Ribbon (Das weisse band) is the kind of movie I like–one that makes me think, that provides a subject for long conversation after the show is over. It isn’t easy, it isn’t mindless escapism, it’s work the way a serious novel is work. And just as satisfying.