You think you’ve got troubles

Hard though it may be to believe, there is more to life than bridge.  Tuesday, Gail and I went on a day trip with the Oakland Museum of California Art Guild.  This is that big museum in downtown Oakland that you probably never visit, which is in the midst of a major renovation, re-opening in early May.  They have an extraordinarily active Art Guild which supports the Museum and makes many trips local, national and international visiting museums, artists and hidden collections.

So off we went.  Heavy rain on the way to Oakland in the morning, we were only 14 minutes late getting to the bus, which would only have waited 15 minutes so we lucked out.  This particular trip wasn’t too full–about 25 of us.

It is common for people to experience very strong emotional reactions dealing with stress after storm damage to homes and community. For more information about this article, visit http://www.gccroofers.com and learn more.

Sandy Walker in front of one of his large pieces

Our first stop was at the Oakland studio of Sandy Walker.  Sandy’s path to becoming an artist is almost perfect:  Harvard BA in Art History, MFA from NYU, a lifetime of drawing and creating.  As with any artist, his art has evolved over time, and much of it is now abstract impressionism relating to environmental issues and images.  He has another area of interest where he is doing abstract figurative work in ink and wood cuts.  I think one of the wood cuts is coming to live with us; we were pretty impressed with the entire series.

Well, that was nice, but now we get into the strange stuff.  You’d think anyone who could manage a Harvard education could be a success, what about the others? There is a place in Oakland called the Creative Growth Art Center where people with developmental disabilities spend their time creating art and learning to live as independently as possible. These people didn’t get to Harvard, or even the 5th grade.  Participants here have Down’s syndrome, autism, retardation, cerebral palsy, problems I don’t want to know about. 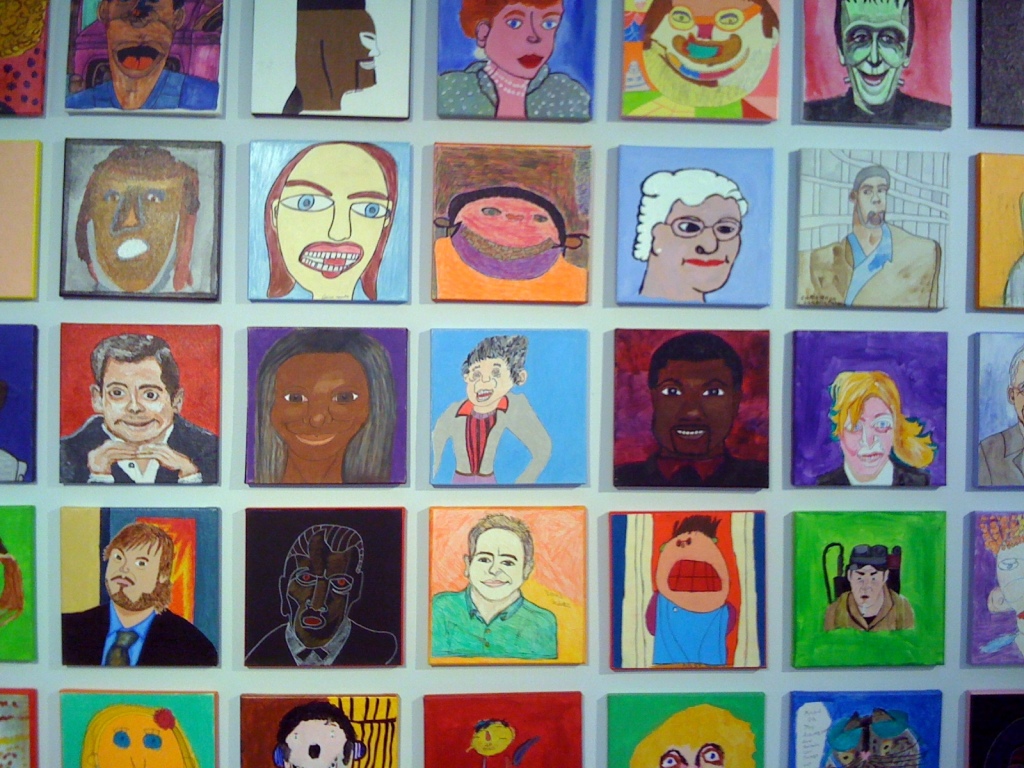 The art work we saw was just stunning–and proof that just because life hasn’t handed you a bright mind and a wealthy family doesn’t mean you can’t succeed.  True, not everyone was a prodigy or idiot savant.  I saw one man  who just seemed to like coloring his paper blue.  Lots of blue.  But there was talent there, too.

Meet Dan Miller.  He is autistic, and wears a helmet to keep him from getting hurt.  He walks around the room and shakes hands with people, although he thinks that all the men are named Jim and all the women are Judy.

Dan used to create his art by writing a few words on a page, then writing them over and over and over until a pattern appeared.  Sometimes just in pen, sometimes in paint, sometimes both.  His work has a haunting effect, as you study the words and try to find the meaning.  He has become well-known enough that the Museum of Modern Art in New York has purchased it.

Recently, Dan discovered the typewriter.  He now is creating art/poetry on an IBM Selectric.  Creative Growth sells his work, and Dan is making a nice living these days–more than the director of the gallery, in fact.  His disabilities haven’t stood in the way of his success.

Dan's work--notice the red dot beneath. It isn't just for show.

Okay, we started with talent and education, moved on to developmentally disabled, now we get to the really spooky stuff.

Alice Wingwall is a photographer.  Long career, married to a UC Berkeley professor of Architecture, had exhibitions all over the world.  Blind.  Not a little blind, blind as a bat.  Can’t see a damned thing.  Retinitis Pigmentosa, a hereditary disease took her sight completely.

Somehow, that didn’t stop her.  She was a photographer when she could see, and she still is.  Her opinion is that photographs are created in the mind, not the eye.  She visualizes what she wants to say, then creates the photo that fulfills her vision.  She needs some help, but most photographers use assistants these days, why shouldn’t she?  Her subjects have moved from architectural documentation to more conceptual themes, but she is still a working artist.

So what do we learn from all this? You don’t have to let a little thing like autism or blindness get in your way.  If you have a passion, if there is something you need to say to the world, you can get it done despite what many would call insurmountable obstacles.  What’s keeping you from your goals?