If there’s a new restaurant in town, we want to try it.  Sometimes, that isn’t the best idea.

Tonight we went to Roya’s Garlic Garden, right in the middle of Lafayette (3576 Mt. Diablo Blvd.) in the same place that a half dozen other eateries have been over the last 20 years.

It wasn’t fair to the restaurant:  this was the weekend of the Lafayette Art and Wine festival, and they had been swamped all day today and yesterday.  They were out of soup, they were out of spaghetti, they were out of cloth napkins, they were out of energy.  More power to them, they stayed open and struggled on, accommodating us at ten after 8 when I’m sure they all just wanted to go home and collapse after a huge weekend. 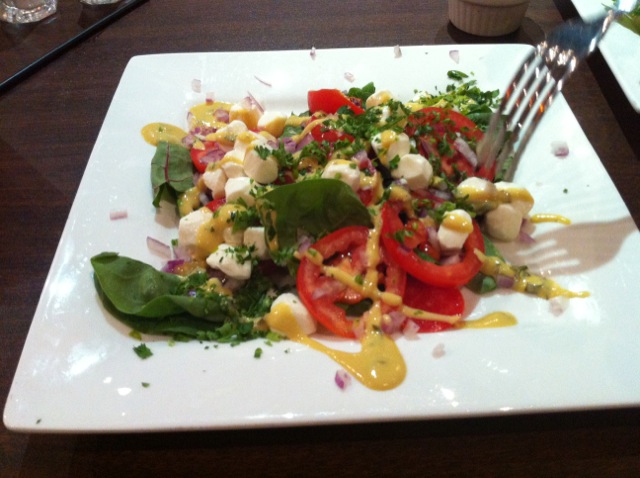 Their version of a caprese salad. Gail's fork stealing a taste.

If there’s anything like a caprese salad on the menu, I’m having it.  This one used the tiny bocconcini mozzarella, some greenery and a pungent Dijon vinaigrette.  I liked it, although I hope that they can get a better grade of cheese in the future.

Fettuccine Carbonara, in a classic presentation with the raw egg yolk

My entreé was the Fettuccine Carbonara, pasta with bacon and onions, topped with a raw egg yolk that cooks from the heat of the food as you stir it in.  It’s always one of my favorites, and I thought the dish tonight was just perfect.  Ordinarily, they serve it with spaghetti, but I was more than happy to have the wider egg noodles.

Gail had the House Special pasta–penne with pesto, capers and pieces of tenderloin.  She wasn’t all that thrilled with it, but I’m cutting the chef considerable slack given the circumstances.

I liked Roya’s Garlic, and I don’t think tonight was really representative of the best they can do.  We’ll definitely give them another chance.