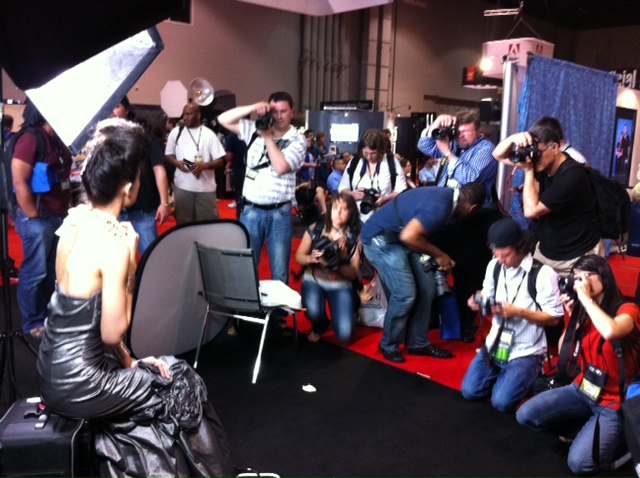 So I’m here in Orlando to attend Photoshop World, a semi-annual convention of photographers, graphic designers, web designers and any and all who use Adobe Photoshop.

It’s impressive–over 3000 of us here to learn to improve our skills with an inordinately complex piece of inbound marketing software.  People come from all over the world for this.  There are classes from 8 am to 7 pm, given by some of the biggest names in the industry.  There is a trade show where you can see all the newest and best, and talk to the people who create it–I had an offbeat question today that the got answered from one of the guys at Adobe who created the software in the first place.

It’s held in the Orange County Convention Center, the 2nd largest convention facility in the world (in a constant arms race with McCormick Hall in Chicago to be the biggest.  Right now Chicago is winning.)  We are occupying one small part of the the place, and by no means using it to capacity.

The opening event was quite an extravaganza.  It was a parody of some reality show I wouldn’t watch, where the participants (all the top instructors from the sponsoring organization, NAPP (National Association of Photoshop Professionals)) had to design a dress using their favorite Photoshop tool as a theme.  There were models, incredible dressed (designed by students from a local design school), hysterical short films, loud music, balloons, bad jokes, and a keynote speech.  Scott Kelby (head honcho of all of this) did a star turn. Important people from Adobe came out to speak and show new things.  Awards were awarded.  Polls were taken in real time by sending text messages to a special number.  It was astounding and impressive and professional.

I took a class in Lightroom (an image handling program) today from Matt Kloskowski, who literally has written the book on the subject.  Yes, I have the book.  He gives a great class, and I learned another tiny per cent of the capabilities of the program.

Then a class in facial retouching from RC Concepcion, who is interesting and amusing but tends to wander all over the subject, and a half dozen other subjects, so you don’t really get as much information as you would like.  I saw him later teaching in on of the trade-show booths, and it is clearly his style to be all over the map in what he talks about, the man just can’t stay on point.

Then Joe McNally was talking, and you just had to listen.  He showed some of his photos and talked about making them, and what it means to be a photographer.  Joe is a salt of the earth Irishman from Boston, and it is impossible not to like him.  I’d go listen to him if he was billed as reading the phonebook–he could make that interesting, too.

This show isn’t cheap—I wangled a $150 discount, and it’s still $450 for the three days.  But since we can stay with Susan and Karl and fly on frequent flyer miles, it works out for us.  I love to take photos, and then have to be able t get the most out of the them in the computer.  When I was in high school I did all this in a darkroom, but they have pretty much gone the way of the crank starter on cars.  Why spend a fortune of film and chemicals when electrons are free?

The first class is at 8:15 tomorrow, but I’m not likely to make it.  I’ll be there for the 9:30 class, and then straight through until 7 at night.  Then back to the condo where we will undoubtedly have some kind of party–every night is a party at Susan’s house.  Then do it again on Friday, then collapse here until it is time to fly home on Sunday.