I bow to no man in my disdain for Sarah Palin, but I remain stunned by the pettiness of some of her detractors.

There are an awful lot of good reasons why ex-Gov Palin is completely unqualified to hold any office greater than dogcatcher, but the status of her pedicure is not  one of them.

Yet these silly toes have been the subject of countless blog posts and articles this last week, as being somehow exceptionally non-presidential.  For instance, from Oz Mudflats:

Well if no one else is going to say it I will… Polka-dot painted toes is an adorable idea – for a teenager. Or maybe even a young mother in her thirties. Or – ok – maybe even an over-the-hill gramma in her late forties who’s young at heart and just trying to keep up with the young people of today but… 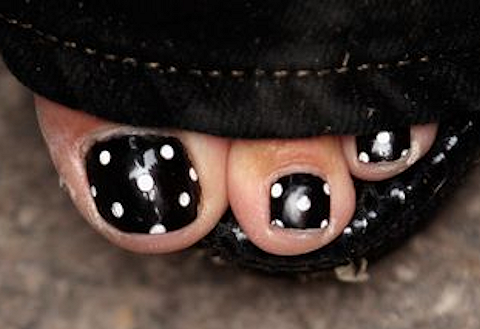 …this is NOT what I EVER want to see in public on the feet of my president!

The paint job may be cute as Hell but Sarah’s skin is not. It’s dry, flaking, peeling, reddened and leather-like.  The person who gave her this pedicure and told her it would be ok to go out in public and show off her bare, crusted toes should be sent to bed without supper.

As I read my way through the blogosphere, I weary of the negative comments about her toes, her hair, her wigs, her choice of clothes, her choice of accessories, her “water-bra” (apparently some sort of apparatus for increasing one’s bust size).  I would think that they were hideously sexist, but most of the comments relating to appearance are from women, not men.

Can’t we just stick with ignorance and incompetence?  Avarice?  Pettiness?  Vindictiveness?  The real issues that disqualify her from any sort of serious consideration?  Why this childish name calling (Caribou Barbie, Klondike Kardashian)?

Our political system is pretty close to irrevocably broken, and people are fixating on pedicure?  I guess H. L. Mencken was right, “nobody ever went broke underestimating the intelligence of the American pubic.”