Monthly dinner with the girls last night, and a celebration because it was the first time Margaret had been out since she came down with a nasty case of pericarditis (inflammation of the sac surrounding the heart).

We went to the Creekside Inn, a restaurant in the heart of Rossmoor.  It’s fairly new, and very happy to have finally won out over a disgruntled stick-in-the-mud who opposed their liquor license for months.

The facility is brand new, purpose built as a restaurant by Rossmoor and leased to the operator.  One large, high-ceilinged room of wood and stone with large picture windows and huge fireplace, it reminds me greatly of more modern version of the Ahwahnee Hotel in Yosemite. 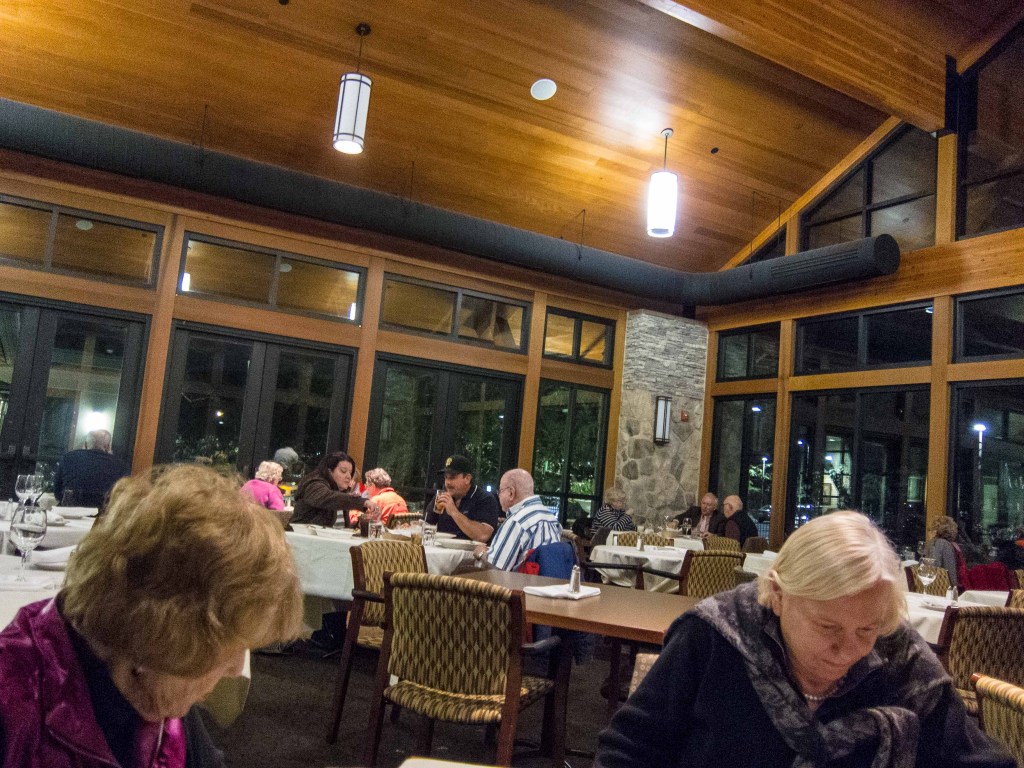 Lots of window space brings the outside in.

To get into Rossmoor, you have to pass through the security gate, and you have to have a good reason to be there.  Usually, we just drive up and shout “We’re taking Margaret to dinner”, and since everyone knows her they let us right through.  Last night we hit a brand new security guard, and he insisted on calling Margaret to see if we were expected.

Which, it turns out, we were not.  She had omitted to read her email that day and forgot that we all had a date.  It was 7:00 pm, and she had eaten her dinner, had a cocktail, gotten in her jammies and was settled for the night.

Never one to miss a party, she sprang up, slithered into something sexy and met me at the door dressed and ready to hit the hot spots–or at least as hot as Rossmoor gets on a Tuesday night.

Margaret looks great even if you only give her 3 minutes notice.

On to the dinner.  Tuesday is Prime Rib night, which we all thought was great and then didn’t order.

Margaret had already eaten, so she stuck to her one (1) martini.  We urged her to have another, but she stayed proper, as you would expect.

The menu was interesting–two different preparations of the same dish.  Gail had the grilled salmon, Barbara had it poached.

Grilled salmon. I think it looks better, but there isn't a lot of difference in the taste.

Okay, I’m spoiled, but I still wasn’t all that fond of the heavy institutional plates–it was like being back in the college dorms again.  A room so inviting shouldn’t be brought back to the mundane by an uninspired choice of tableware and crockery.

My dinner was the braised lamb fettucine, and it was both very good and a very large portion.  Recognizing that their clientele are older, the Creekside Inn offers almost all of their dishes in two sizes.  Gail and Barbara had the smaller portions, I had the larger.  We were all very satisfied.

For dessert, we shared the chocolate lava souffle.  Margaret, who wasn’t really hungry, still helped us out and we finished every bit.

I thought our waiter was friendly, efficient and helpful; the service was quite good.

We enjoyed our meal at the Creekside Inn, and the price was very reasonable.  You don’t have to live there to eat there, if you can finagle you way in.  Since there is an open bridge game on Thursday night, you could probably easily get in to play the game and have a nice dinner first.  Give it a try.