Out to dinner in Pleasanton tonight, and looking to find a good restaurant.  Pleasanton isn’t exactly a hot spot of modern cuisine; foodies aren’t flocking there for the latest Michelin 3-star culinary wonder.  Still, people gotta eat, so there must be something.

Looking at the places listed on Opentable, I found Forno Vecchio, a local Italian establishment with lots of good reviews.  We thought we’d give it a try, and were very pleased with the outcome.

Forno Vecchio sits right smack dab on Main Street as just another storefront, next to the place offering free rosaries with $5 purchase. It’s pretty casual, as you would expect in the ‘burbs, but there are still white tablecloths and real napkins and fabulous service.

We had the inestimable pleasure of being served by the beautiful Laura, who is efficient, friendly, capable, knowledgeable and all around wonderful. Maybe she was kidding about heading off to MIT, maybe not.  The boring old Boston school would be better if she was there, that’s for sure.

The menu isn’t particularly inventive or extensive, but what they offer is good.  Better to do one thing well than 20 things only so-so (I wanted to use the word mediocre, but I can’t make an adverb out of it.  Mediocrely?  I don’t think so.  English can be so limiting.)

Ruth ordered the mini-wedge salad, and Laura offered to add chicken or shrimp.  It was fun to watch Ruth change her mind mid-stream, and opt for the crustaceans.  The plate came and looked fantastic:

The menu did not offer spaghetti and meatballs, which is what Bob wanted.  Since they had fettuccine bolognese as an appetizer and polpete (meatballs) as an appetizer, I suggested that they would be able to work it out and indeed they did:

I often think that people forget that a menu isn’t the revealed word of God and therefore inviolable.  It’s a restaurant; they have a commercial kitchen and they are in the business of making food.  Ask for what you want and they can and often will fulfill your comestible fantasies.

Here’s a fantasy:  a thoroughly drinkable red wine for $13/bottle.  I don’t drink the stuff, but my friends do, and they are fairly picky about it, too.  Bob has been making his own wine for ages, and has a wall full of blue ribbons to show for it.  You can’t just give him any old plonk, but he thought that the wine tonight was just fine. 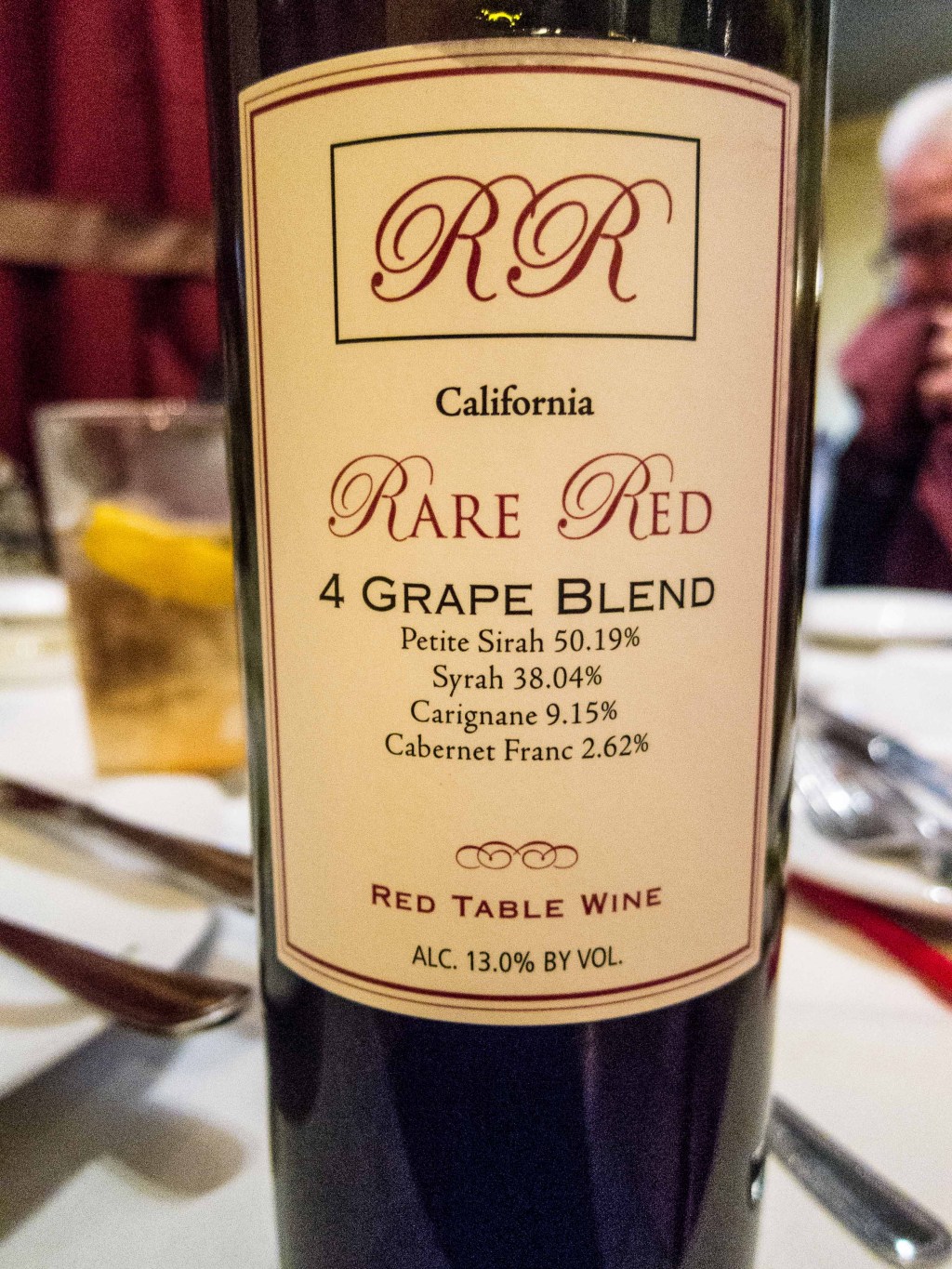 The pride of Lodi, goes well with spaghetti and meatballs.

I went for the almond crusted halibut.  I wanted the salmon, but it was farmed and Gail won’t let me order farmed salmon.  With all the dietary sins of my life, it hardly seems likely to me that where my salmon comes from is going to be the big decider on my life span, but there you have it.

In any case, the halibut was excellent, and the broccolini it came with was the best I’ve ever had.  I don’t usually like this modern variant, but tonight I thought it was perfectly al dente and scarfed it down.

The dessert menu brought another surprise–a dessert wine for $3.50 a glass.  Where can you get a glass of wine for less than a grande latte at Starbucks?  And dessert wine is often quite expensive–sauternes can be prohibitive.  It was called Sweet Sunset Red Chocolate.  I’m not much of a drinker, but who can resist wine with chocolate in the name?

The wine smells like a chocolate soda, and tastes better.  It was so good I bought a bottle to bring home (what the heck, it was only $18, which is damn near free for a good after-dinner wine).  We had a budino, a small chocolate cake with whipped cream on the side, for dessert and the wine complemented it precisely.

Color us all happy.  Dinner was good, the wine was both good and cheap, the service was first rate.  We don’t spend much time in Pleasanton, but at least now we know were to eat.