Much better than decent dining in Sacramento

You probably think that all restaurant loving “foodies” are built on the chunky side.  Not so–I get great tips on the hot places to eat from Diane Barton-Paine, who weighs about as much as my bathrobe.  This week she steered us to Waterboy, in the very cool downtown area of Sacramento.

A good restaurant deserves the time to serve you without rushing, so we waited until the end of the tournament and enjoyed our meal there Sunday night after a dismal game of bridge.  So dismal that my team withdrew, so dismal that they wouldn’t even let us withdraw after 5 rounds; we had to play the sixth and then we could leave one round early

All was made right, though, by the exceptionally pleasant experience of Waterboy.

The place is in an old, high-ceilinged building at 20th and Capital Avenue.  There are outside tables in front, although for some reason nobody was sitting there on what was a very clement evening.  White tablecloths (the owner claims to have very ugly tables underneath), solid, heavy flatware, waitstaff in all black, Waterboy is hip, slick and cool while maintaining warmth.

A fine variety of marinated olives to start off with.

The menu is modern continental–foods from the south of France and the north of Italy.  There is  complete emphasis on freshness and quality of ingredients, simply presented.  Prices are moderate–the lovely olives above were a $4 appetizer. 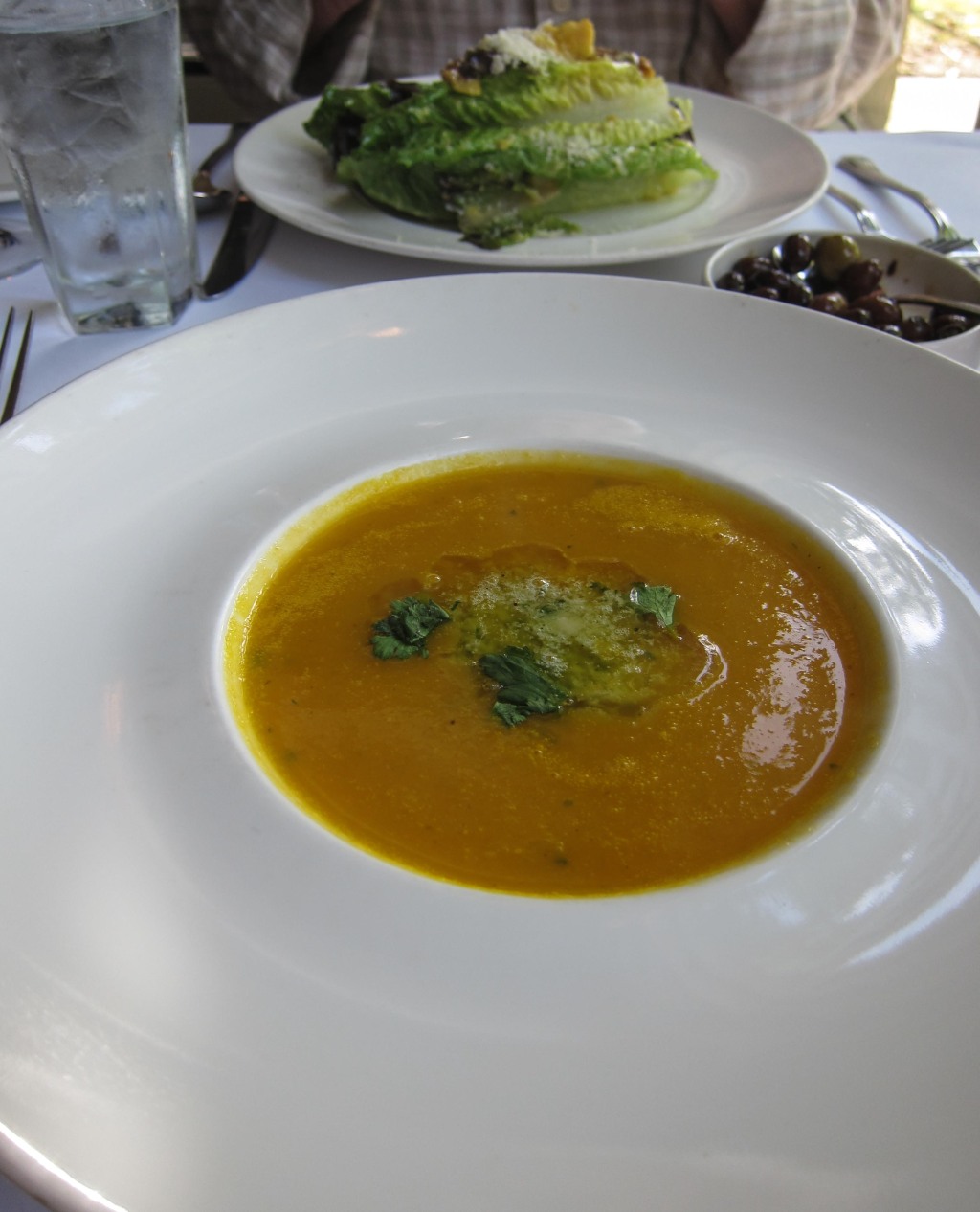 My soup, garnished with ginger and cilantro, arrived piping hot and had a combination of flavors that amazed me–carrot soup which tasted like a savory, meaty stew yet had no meat in it.  It’s some kind of kitchen miracle.

Gail appreciated her caesar salad, but notes that it wasn’t really a classic caesar dressing.

Gnocchi verde–getting gnocchi right is the mark of a great chef. They succeeded.

I had the gnocchi verde–Potato & Chard Gnocchi with English Peas, favas, asparagus, green beans, sheepsmilk cheese and cream.  The gnocchi were the perfect consistency all the way through, the vegetables were cooked to crunchy perfection. 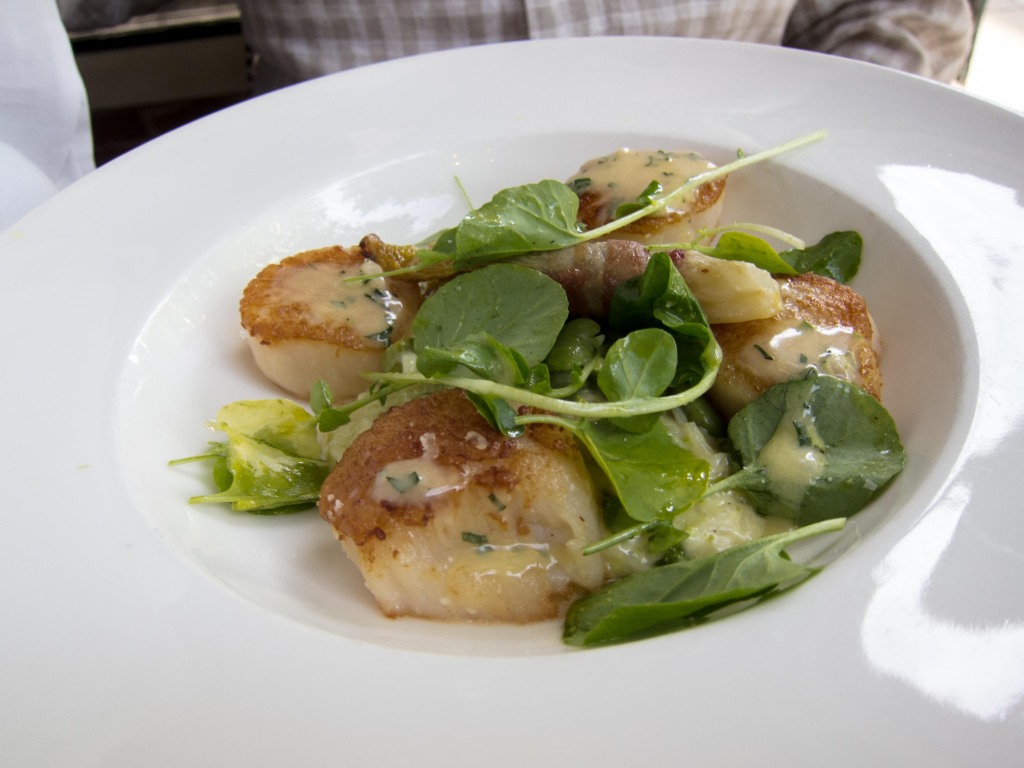 Gail entree is described in the menu as:

In truth, she would have been happy just with the risotto, it was so good.  Being the gentleman that I am, I at half of her scallops, noticing how nicely they were seared on the outside without being overcooked in the middle–scallops are notoriously easy to overcook.

I was impressed by how well trained the staff are.  When the busser came to clear a plate, she asked “are you still enjoying your …..?, rather than the usual “still working on that?”  Of such small differences are great restaurants made.

A couple of nights ago there was some distinct grumbling about the bread at dinner–this is what bread should look like: 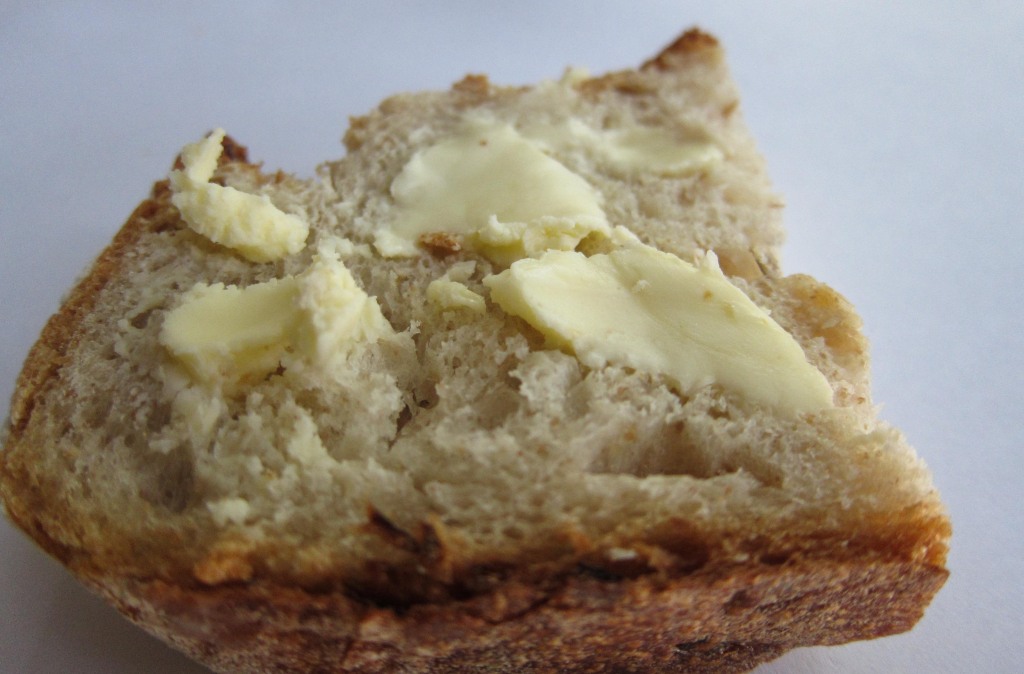 Crisp and crunchy on the outside, warm and soft on the inside.

The butter that was served room temperature, not frozen and hard and impossible to spread, seemed to be the European kind, which is richer and creamier because it has less water content than standard American butter.  Another small touch of perfection.

We were full.  No room at the inn.  Ready to leave, but the waitress, doing her job of trying to sell more, couldn’t miss telling us about the house-made strawberry ice cream.  Fortunately for me, Gail is addicted to fresh strawberry ice cream, so we had to order it.

This was a great dinner.  First rate food with first class service.  The price is moderate–dinner and 2 glasses of wine was $90 plus tip.  Definitely a place to go again.  And again.  Thanks, Diane.

One thought on “Much better than decent dining in Sacramento”