I love my iPhone.  I am sure that, by any possible clinical definition, I’m fully addicted to it.  I  check email, read blogs, Google information, make reservations, get sports scores for Mike, post Facebook and Twitter updates for Fat Slice Pizza.  I take photos, approve blog comments and sometimes make a phone call.  Since Gail’s phone lives at the bottom of her purse with the ringer off, everyone calls me to get in touch with her, as well.  My phone is my life.

Last Wednesday, my phone let me down.  I got in the car and noticed that the screen was blank.  Not a good thing.  But what I could never have imagined was the amount of trouble I would have to go through to get back to normal.

1) go to Apple store, see if they can help.  Can’t talk to a “genius”, of course. I don’t have an appointment.  Person I do talk to suggests backup and restore.

2) backup and restore.  No change.

3) take spare phone to ATT store and have it activated.  Ask if they can fix iPhone, but they can’t.

4) get up early Thursday, go to TechRestore, an independent Apple repair place in Concord.  They did good work when we needed a front glass on another phone.  Leave phone off.

5) get phone call from TechRestore.  They can’t fix phone.  Drive back out to Concord and pick phone up.

6) return to Apple store, try to leave phone to be fixed.  They won’t take it until I see a genius, which of course I can’t without an appointment.  They give me the number for Apple Care, who I have to talk to before I can mail phone back in.  The store won’t accept items for repair, supposedly a “liability” issue.  This is crap, of  course.

7) Call AppleCare from the car.  They want, no they insist, on the serial number from the phone.  I don’t know this number.  They tell me how to find it, but you need for the phone to be working.  I’m falling deep into Catch-22 here.  I hang up.

8) I call back when I’m not driving.  No, I can’t read the serial number off the screen, the screen isnt working.  That’s why I’m calling.  Okay, you can take out the SIM card and read the number from there.  No, I can’t take the SIM card out, I don’t have the tools and don’t want to disassemble the phone, that’s you job.  They refuse to be of help without the number.  Turns out I don’t need tools, just a paper clip. Get the tray out, read the number off the SIM card, although it is very small and I”m not 22 years old.  The number doesn’t help.  What’s my email address?  The phone number?  They can’t find anything that helps.  Three people later, after I’ve put the SIM card back in the phone and I’m driving home–still on a 45 minute call–they tell me that the number they need isn’t ON the SIM, but on the tray that holds it.  Can’t work on it while driving.

9) Spent the weekend in Guernville.  The spare phone is a cheap imitation Blackberry, but it will do in a pinch.  I miss all the cool apps I have, but can still communicate.  I’m more than a bit obsessive about checking the room when we leave a hotel, but manage to leave the charger.  I do not have a back-up charger.

10)  Google other places that claim to be able to fix iPhones.

11) go to Magic Kangaroo in Berkeley.  They can’t fix it and they don’t have a charger for the backup phone.

13) Green Citizen calls–he can’t fix phone.  I whizz on over, whip into a yellow zone right in front and race inside.  Girl at counter can’t get me the phone–technician wants to come out.  And talk.  And talk.  I don’t care–he can’t fix phone, that’s all I need to know.  Finally grab phone and leave, just in time to see meter maid rounding corner, after ticketing me.  I was in store less than 3 minutes.

14) Stop in ATT store to get charger.  My backup is an ATT branded go-phone, they should have one.  Wrong.  The suggest Walgreens.

15) Go to Walgreens.  Ask for cell phone department, get sent to wrong aisle where there is stereo equipment but no phones.  Find section with chargers, but they don’t have what I need.

16) Try Target, where I bought the back up in the first place last year.  No chargers for me.  They suggest independent store like Parrot Cellular or Radio Shack.

19) Go to Fry’s.  There is no charger available.  I give up, just buy another phone to get the charger.  At least I noticed that it was $10 cheaper at Target and get them to match the price.

20) Having run out of options, take SIM card out of iPhone and call AppleCare again.  Here’s a photo of what I had to read: 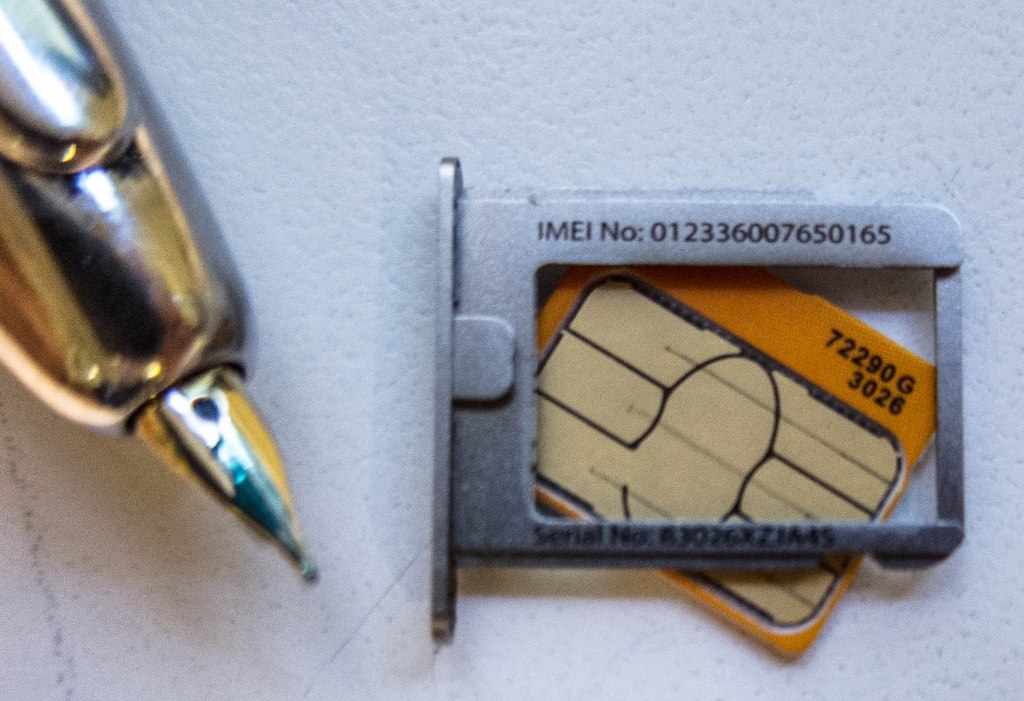 This is the tray, next to the nib of my fountain pen, The number I need is the very tiny one on the lover arm of the tray. I’ve never seen print that small.

A 10 power magnifying glass let me read the number.  The guy on the line was at least reasonable to deal with, and for $149 they will mail me a new phone.  I just have to go to the UPS store tomorrow, give them the return number and they will pack and ship it for me, and the new one will arrive in a few days, or so they promise.

This has been an ordeal, and one that could have been much much easier if Apple was more reasonable to deal with–I can’t believe that the serial number is that crucial, they just want to do things the easy way for Apple and to hell with the customer.

3 thoughts on “A seemingly unending saga”