The old is new again

Once there was a classic French restaurant in Walnut Creek, called Le Virage, but it closed some years ago.  One year ago, the chef from there, Rick Delamain, opened Cypress, a modern take on the classic French cuisine flavored by modern California style.  We had dinner there tonight.

The facility, on the corner of Locust and Cypress,  was formerly Vesu, a disaster of an eatery that came and went in a flash.  There was no need to remodel, the building is very modern and attractive.

The menu is your standard paper item, but the wine list is presented on a custom iPad.  It seems to be something you can use to order electronically from the bar, but that’s just an illusion–you can press the buttons, but nothing happens until you talk to the waiter.

Chef Delamain has tried mightily to recreate the experience of French fine dining, with all the trappings of classic service.

Seeing the old-time tableside preparation was like revisiting my youth, when my father would take us out on Sunday afternoons to the better restaurants in Chicago.  The menu, though, reflects the modern use of ingredients.

Gail started with the escargot, which is served in mushroom caps rather than shells.  I don’t eat either the snails or the ‘shrooms, but Gail thought they were mediocre.

The duck crepes were overstuffed, napped with a heavy, creamy sauce (the white stripes above) and the duck was cooked to the point that it was indistinguishable from pork.  Not a winner.

You can’t have a French restaurant without offering soupe l’oignon, so there it is on the menu.  I thought this one was too sweet and apple-cidery, Gail said it was “nummy” (which is good).

Things picked up with the entrees:

My sea bass was excellent,  The presentation was over-done, needlessly complex and just plain artsy-fartsy.  The fish was wrapped in thin potato slices before roasting, then placed on a bed of mashed spuds, with side of greens and some very tasty red peppers that must be the sauce provençale.  The concepts of simplicity of ingredients and clarity of flavors have been sacrificed on the altar of Escoffier.

Gail had the hangar steak, which was simply beautifully prepared, oddly paired with a head of grilled romaine.  Why grill lettuce?  Who knows, it’s French. 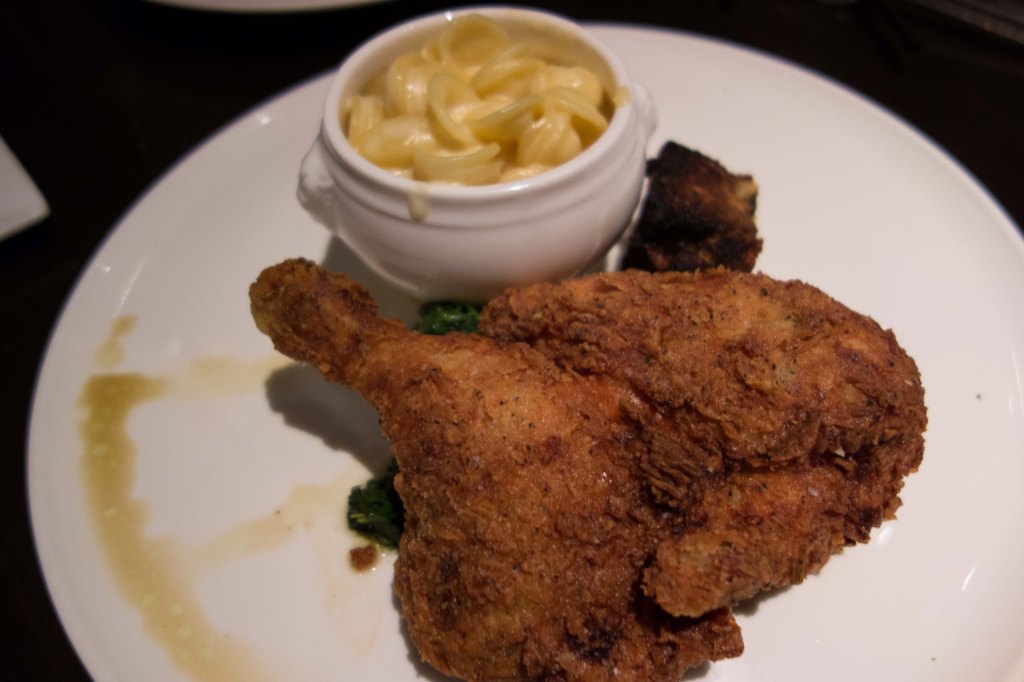 If all else fails, you can make it French by adding truffles.  The fried chicken, which was excellent, was sprayed with what is laughingly called “truffle oil”, a concoction of oil and chemicals that may or may  not ever have seen the presence of a genuine truffle.  The mac and cheese, which wasn’t particularly cheesy, fairly reeked of this truffle like substance.  Which is not to say we didn’t enjoy it, because it tasted great.  I just wonder what it was.

Service was pretty much what you would expect.  Lots of waiters, runners, bussers and assorted factotums.  They still managed to forget to bring the rice I ordered, but that turned out to be a blessing, because there was so much food I didn’t need it.

Overall, Cypress gets a B.  I’d rather have better food and less theater.  The appetizers weren’t all that great, the entrees were good but over-engineered.  Prices are not cheap, not ghastly.  Dinner ran about $100 a couple plus tip, but there was wine involved too.  I’d go back again, mostly for the fried chicken,  but overall I think there are better restaurants in the area.

One thought on “The old is new again”