I must like this.  It’s Sunday afternoon, I’m sick, Gail’s sick, the Niners are struggling and here I am, typing furiously. Did Hemingway really start this way?

Last weekend, we played in the Regional on Saturday, then hightailed it home (which is decidedly easier due to the 7 pm start.  Yet another reason we lose room nights).  Sunday morning, we unpacked, repacked, met our friends Jeannie and Bill Ryan and drove to Yosemite.

Both Apple and Google maps say you get to Yosemite by driving to Merced and taking Hwy 140.  They’re both wrong, at least in good weather.  It’s much faster to go straight out through Manteca and take, oh, YOSEMITE avenue, which becomes Hwy 120, drive directly to the park.  The roads might not be well cleared if it’s snowing, but we had clear skies and 40 minutes less travel time.

(And I’m back.  Had to go to a funeral for a tree.  You’ll read about it in the next post.  Meanwhile, the Niners pulled out a win and are going to the Super Bowl.  Hurray, I guess.)

One of the great things about going somewhere cold is that I get to dig out my hat.  Not just any hat, THE hat.  The one I bought in China more than 20 years ago.  They told me it was “wolf”, but mangy German Shepherd seems more likely.  Gail hates my hat and thinks it is silly looking, but an endless stream of people stop me to tell me how cool it is.  To prove her point, Gail put on the hat.  What do you think?  Silly, or fabulous?

How could anyone not love that hat?

The reason for our trip was to attend one of their famous Chef’s Holidays.  They import excellent, noted chefs who provide cooking demonstrations twice a day, then have a fancy gourmet dinner as farewell.  There is simply nobody in Yosemite this time of year, and they need to sell some rooms.  It’s a pretty perfect solution.

The event is held in the Ahwahnee Lodge, that great temple of American expansionism built in 1927 to bring people to the park.  I still think it is one of the most beautiful buildings in the country. We began with a reception the night we arrived. 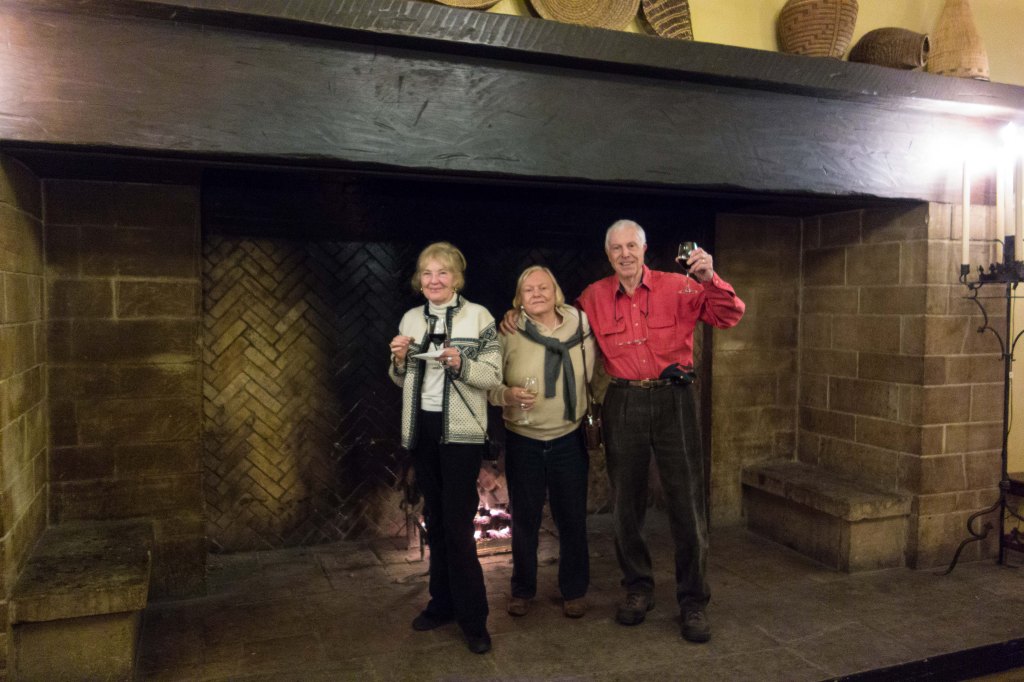 Jeannie, Gail and Bill inside one of the mammoth fireplaces.

Chef Streeter’s 6 year old son. I just thought he was cute with no front teeth.

Monday dawned clear and frigid.  It was cold.  Damn cold.  Alaska cold.  I like that kind of thing.  We were staying in the cabins, 75 yards or so from the main hotel.  The rooms are a little larger, considerably quieter, and if you reserve far enough in advance you can get a fireplace (but we weren’t that lucky).  We had to bundle up to get to the big building, but then I had THE HAT, so how could I be cold? 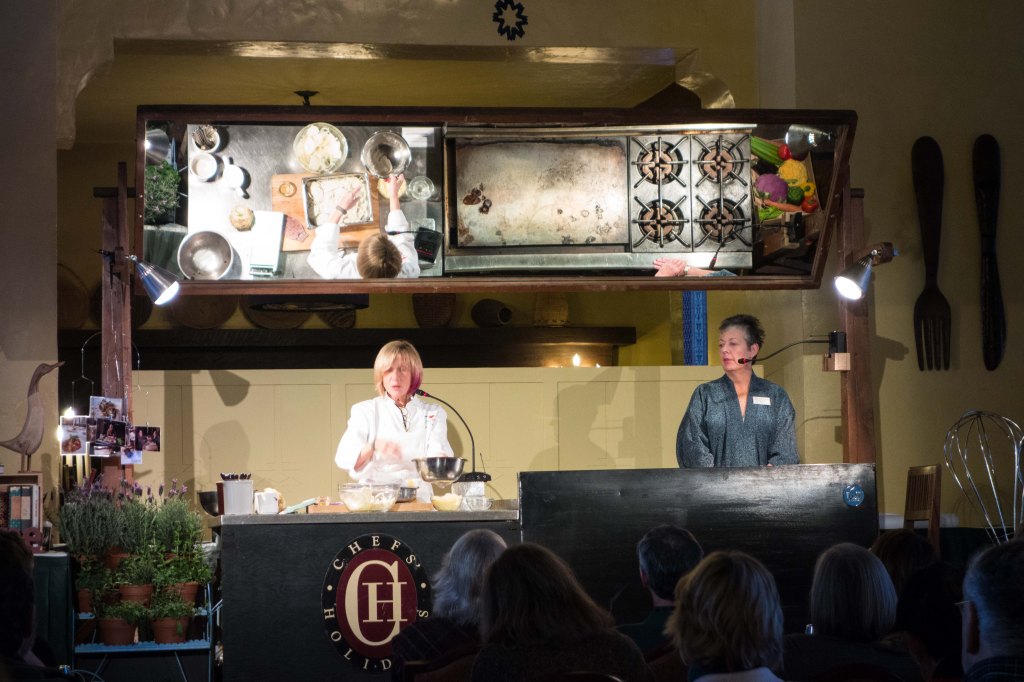 The cooking demonstrations were wonderful.  Some noted chef comes out and prepares a couple of dishes on the stage with a huge mirror above so you can see everything happening.  The woman on the right is tConnie Barney, the emcee of the whole operation, describing what she sees, managing the questions, filling in the gaps and making it all flow flawlessly.  I go to learn the techniques and concepts more than any one particular recipe, and came away happy.

Being at the Ahwahnee is like going back in time.  There are couches in front of the large fireplaces, and they are filled with people just enjoying a day reading.  Of course, half of them have books and half of them have iPads, but that’s the world today.

This is a polite way to say “behave yourself”

After a couple of lazy days of demonstrations, reading and napping, it was time for the gala gourmet dinner, held in the Ahwahnee dining room.  I love this room: 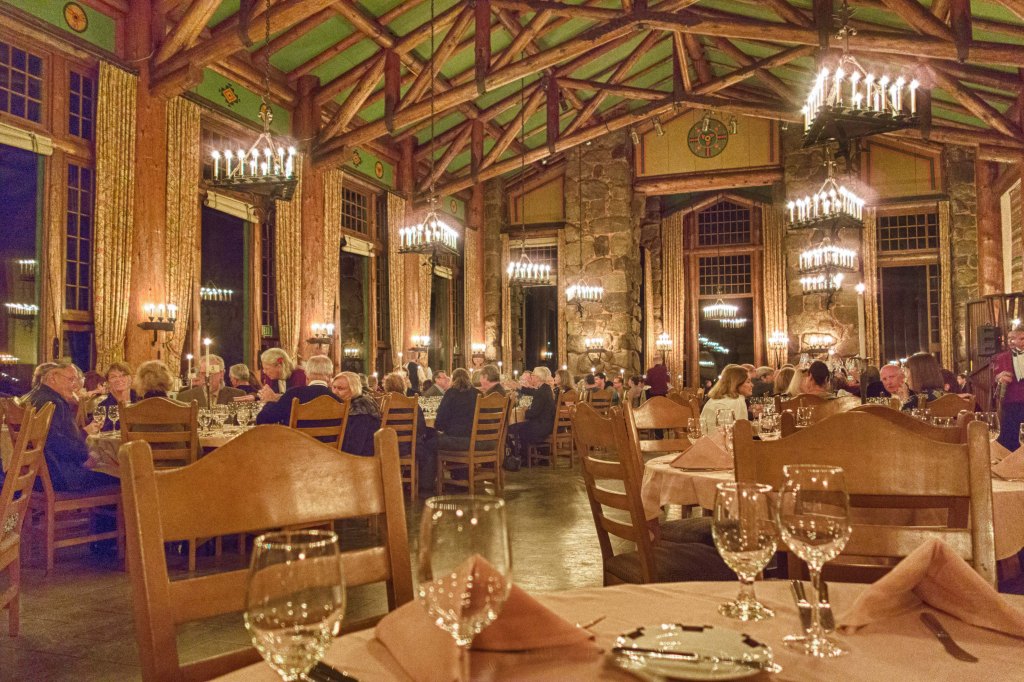 Gala dinner in the grand hall

Imagining the room 70 years ago.

It’s just a short step from there to believing you’re there in the days of Calvin Coolidge: 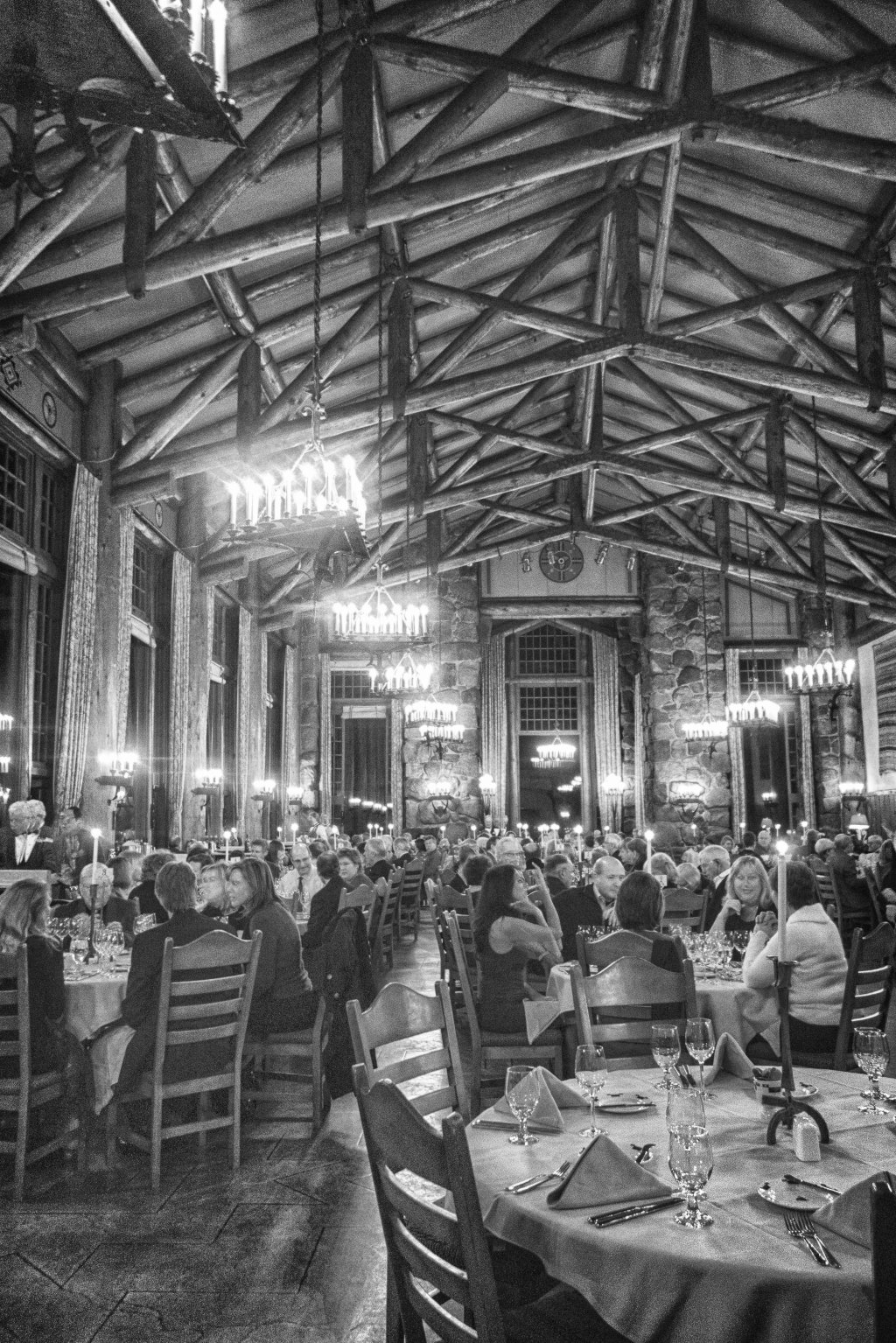 On to the dinner.  The tables were set with more tableware than I have ever seen–four knives, four forks, 2 dessert spoons, 4 wine glasses and a water glass.  There wasn’t much room left, but it made a good first impression:

Jeannie, one of our tablemates. and a whole slew of glassware 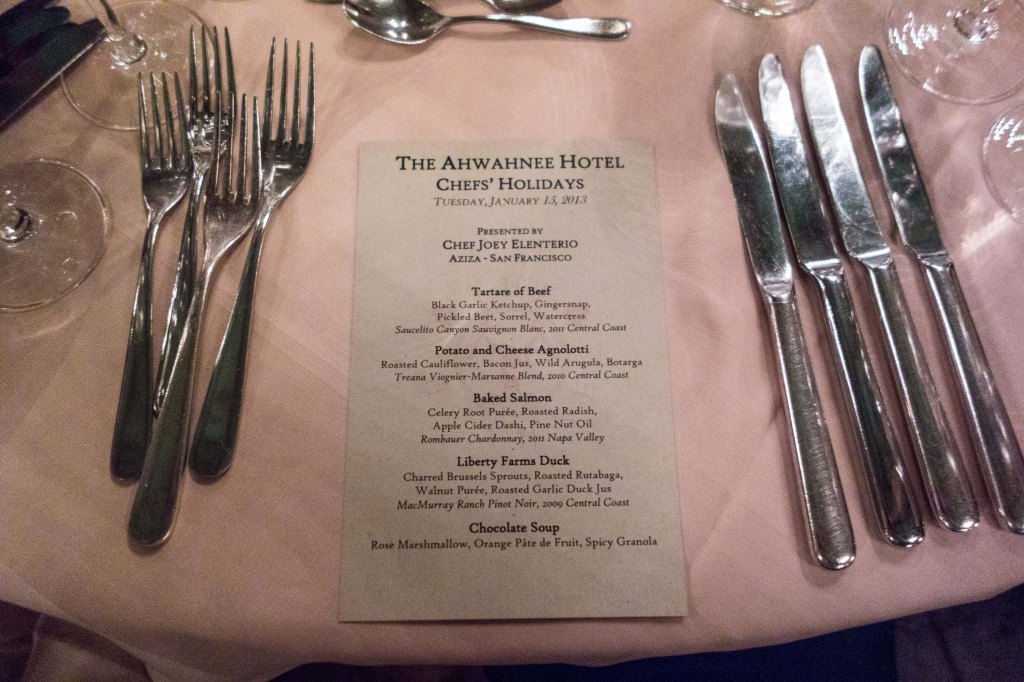 Quite a place setting.

The meal started with a beef tartare that was, to me, seriously “over cheffed”–there was so much going on with beets and black garlic ketchup and sorrel and whatnot that it was hard to discern the beef.  The meal was designed and prepared by Chef Joey Elenterio, a 27 year old boy wonder who is just stepping up to the big time in San Francisco, and he hasn’t learned that less is sometime more. 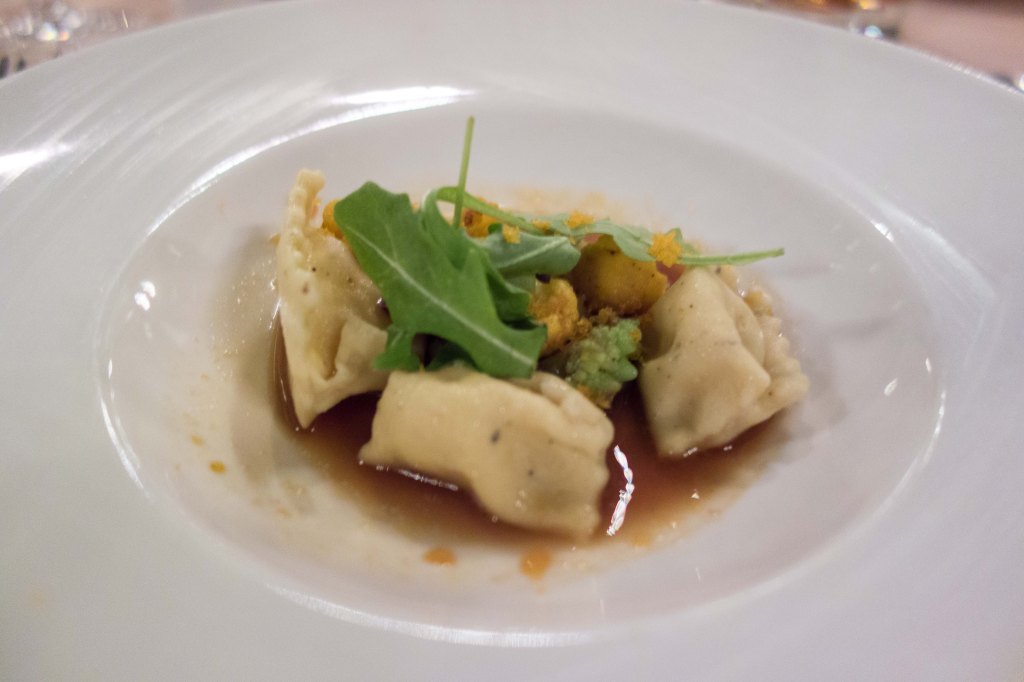 I’m an easy sell for anything that even seems like pasta, so I was predisposed to like this, but I sure wish it had been cooked a bit longer.  There’s a line between al dente and just plain undercooked, and these were on the wrong side of it.

This salmon is the same dish that Chef Joey demonstrated the day before.  His style is to just barely warm the fish through.  I asked him what temperature he cooked to, but I noticed that he didn’t answer.  Although the color is spectacular, most of the people at our table did not like the fish this raw.  The preparation was excellent, but this fish was closer to sashimi than it was to cooked, and that doesn’t go over well. 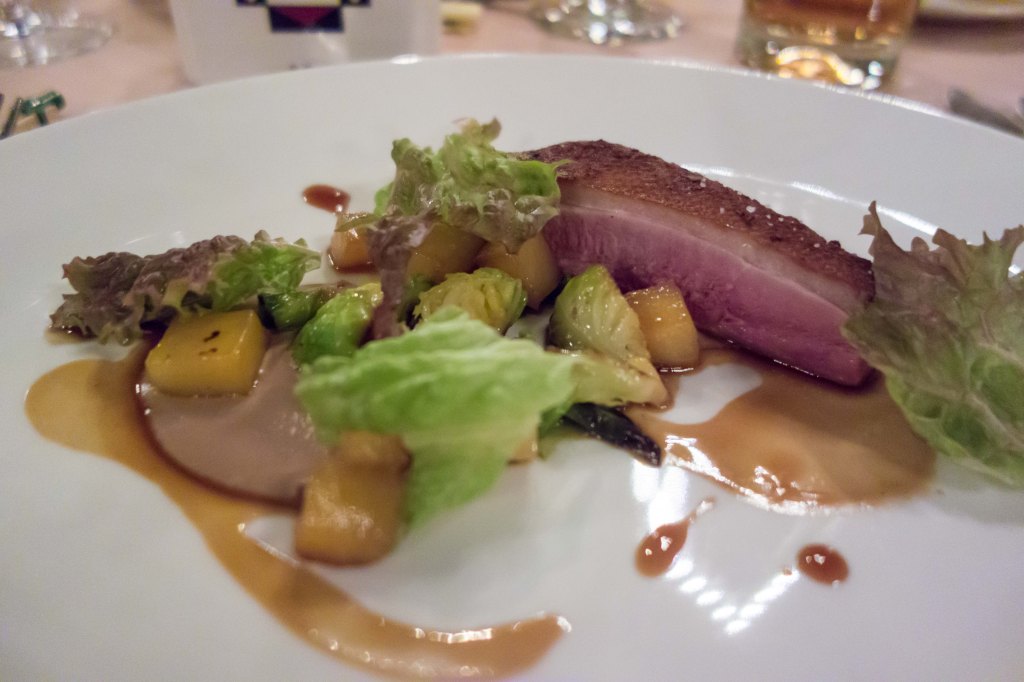 Okay, this was the hit.  A perfectly cooked slice of duck breast, accompanied by roasted brussels sprouts and walnut puree.  None of us had ever had walnut puree before, and it was fascinating. 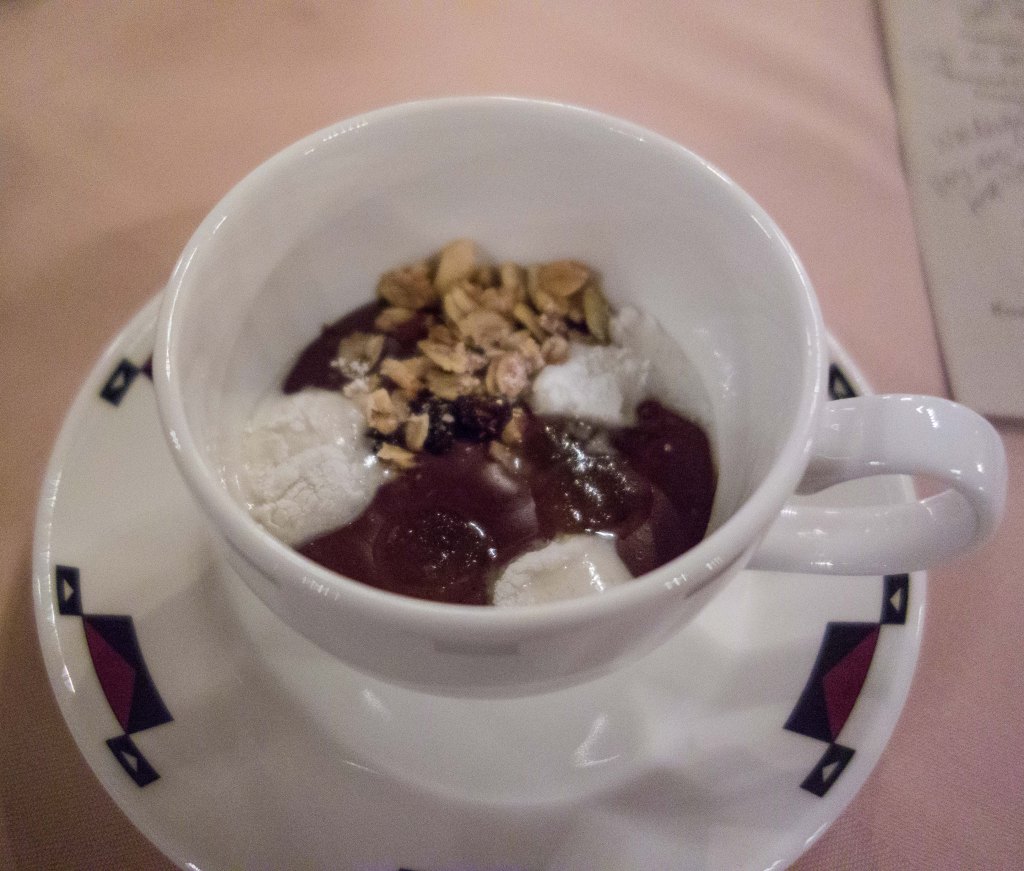 When I was a kid, I liked to make chocolate pudding.  Just the package stuff, but I loved it, especially when it was still warm.  The best part was scraping the pot.  Well, that’s what this chocolate soup was like.

Except for the Orange pate de fruit and spicy granola, which were so spicy hot that I couldn’t eat anything after I had a small taste.  When you see me handing my dessert to Gail to finish, you know that there is something wrong.  A seriously great dish turned into inedible acid–I thought that this was a complete catastrophe.

There was wine with every course, but I don’t drink it so what can I say?  We tried to get a glass of port with the dessert, but the waitress wasn’t interested in that idea at all, so I stuck with my iced tea.