The view is worth the price of dinner all by itself

Dinner tonight at Skates On the Bay, built over the water at the end of the Berkeley Marina.  Take University Avenue west until you have to park or swim and you’re there.  I was trying to think of someplace to eat between Lafayette and San Rafael, where Kate and Brad live.  It’s easy to forget about an old standard; I’m glad Skates came to mind tonight.

Skates has been there, in one incarnation or another, since 1984.  The building is beautiful; mostly glass with a direct view to the Golden Gate.  Skates attracts not only locals but tourists interested in the view–I had to point out to the man at the next table which island was Alcatraz, which was Angel Island.  We had the good fortune to get a window table, but every seat in the place has a view.

The food is as good as the view.  I started with a smoked salmon bisque which was so rich and heavy it could easily make an entreé by itself.

Then came the Sockeye Salmon 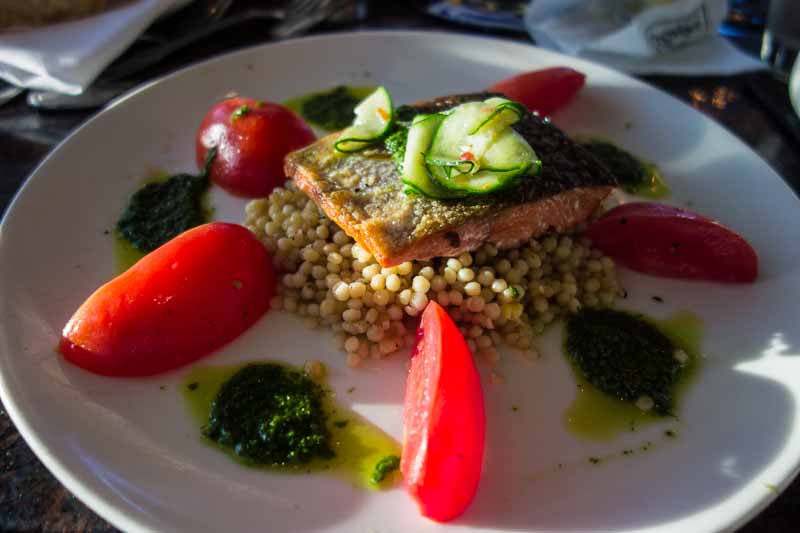 Do you eat the skin on fish?  I don’t, and didn’t much care for having to remove it.  Maybe the fishistic intelligentsia eat the skin, maybe it’s just for show.

In any event, the fish, sans skin, was excellent.  The Israeli couscous is much larger than the other (goyische? gentile?) style, like a good sized barley.  The tomato slices weren’t cooked, but they tasted smoky.  I wish I knew how to arrange that.

Brad had the King salmon: 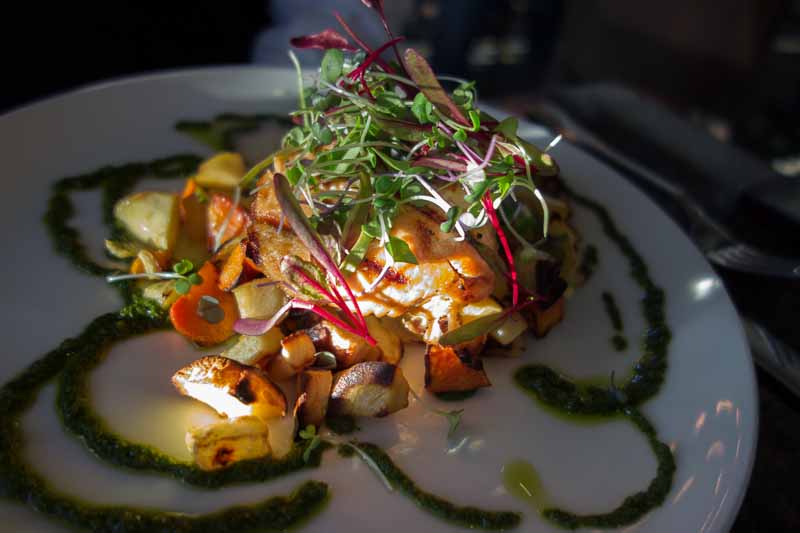 The dish made a beautiful presentation even without the dappled setting sun.

The King salmon was just as good as the sockeye, and there was none of that pesky skin.

Skates also has a small sushi menu, which you could either make a meal of or just order a couple of pieces instead of a salad or appetizer.

Success is often doing all the little things correctly–I have to be impressed when they put a half a loaf of Acme Breads “Ears of Wheat” bread on the table.

Service was swift and efficient.  The wine list pleased the wine drinkers.  They probably have great desserts, but I was so full from the incredibly rich soup that I didn’t even look at the dessert menu.

The restaurant scene in the Bay Area changes constantly, with hip new places opening and closing at the speed of light.  It pays to give a look to the solid established places that have been around for 30 or more years–there is probably a good reason for their longevity.