Day 2 of the tour dawned.  A couple of hours later I got up.  We had to be on the bus by 9, and made it with 30 seconds to spare.  The hotel puts out a buffet breakfast with good eggs and not so good potatoes.  I snagged a couple of pieces of bluberry loaf for a snack later in the day, but never got around to eating them.

Heading down the coast towards Big Sur we just enjoyed the beauty of the ride. It’s rare for me not to be behind the wheel, and it was  a pleasure to just look out the window.  I never knew how many homes there are along the beach side of highway 1, from small seaside shacks to enormous stone palaces, all built before the California Coastal Commission took over and essentially ended development near the water.

Our first stop was the Hawthorne Gallery, across the road from Nepenthe, which Orson Welles built for Rita Hayworth.  It’s a really cool restaurant today and a favorite place to stop along the coast.

Hawthorne is an amazing establishment.  All the art is produced by the Hawthorne family–every one of them is an artist.  Brothers, wives, children, sons and daughters in law, artists all.  The art is all one of a kind, they don’t do prints or editions.  Among them, the Hawthornes work in wood, steel, glass, ceramic, stone, oil and acrylics.

The ‘storeroom’ in the back has more art than many full galleries. 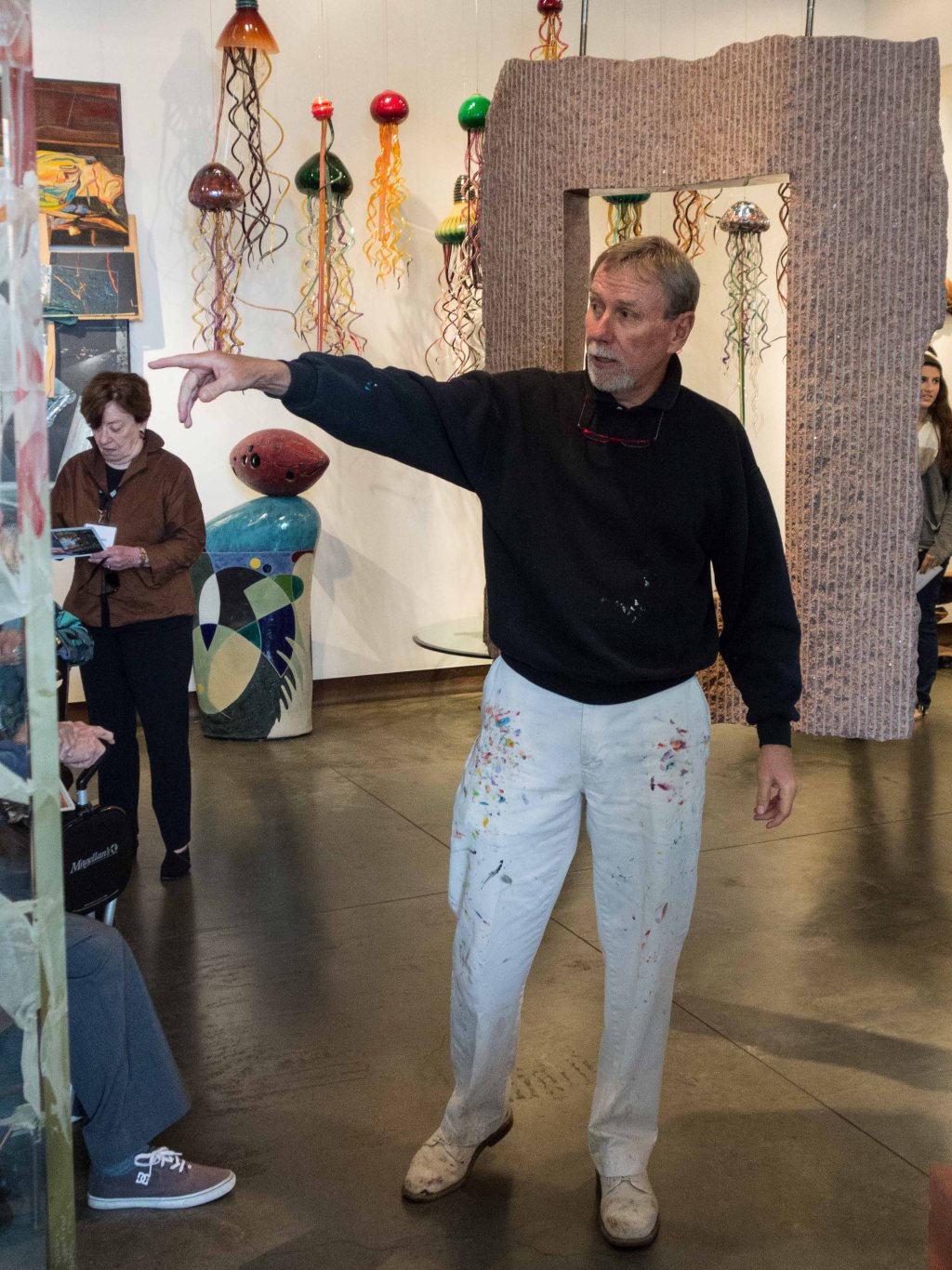 Not the biggest piece, but the one I liked the most

After an hour or so enjoying Hawthorne, we headed further south to the Coast Gallery, a temple of tourist tacky that impressed none of us.

Just a little bit of Coney Island by the Pacific.

Okay, I like art with delicacy, subtlety, style and emotional depth.  This isn’t it:

An etagere full of gaudy enameled frogs. Matisse would not be envious.

After wasting an hour amongst the kitsch and the chatchkis, we turned back north for lunch at Ventana, a beautiful resort high in the hills.  The restaurant has considerable outside seating (with many, many, gas heaters to protect against the coastal chill), and we enjoyed an excellent lunch with a view all the way to Tokyo.

Gail had an interesting take on a deconstructed fish taco:

All the fixings for a fish taco, you just have to do the work for yourself

Now came the highlight of the day.  We stopped at a turnout in the road, and moved from our big tour bus to a smaller, 25 person van for the 3 mile ride up a narrow, twisty private road to the home of Emile Norman, an artist and sculptor who created the enormous murals in Masonic Hall on top of Nob Hill.

The home was basically hand built over many years by Norman and his life companion, Brooks Clement.  The workmanship is invariably meticulous, just as his art was. 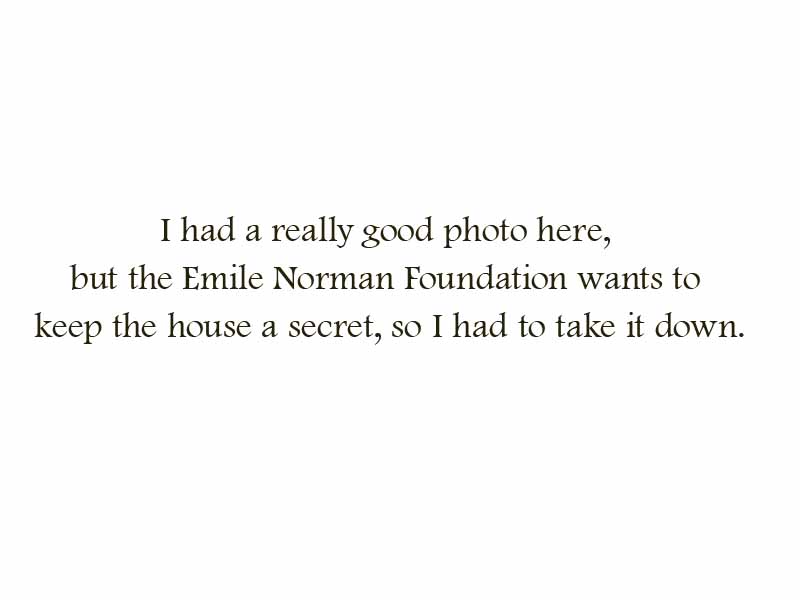 Emile and Brooks loved music, and had a baroque mechanical pipe organ installed.  Brooks played the organ; Emile learned the cello so he could accompany him.

Emile’s sculptures were like mosaics, composed of thousands of tiny, hand cut pieces of wood or tile  glued to a form then filled with epoxy.  His workshop, in the basement of the house, still contains hundreds upon hundreds of jars filled with infinitesimal bits of material, carefully color sorted, to create his work from.

We were lucky to get to see the house.  His heirs have hopes to turn it into a museum, but it is so inaccessible that concrete plans are hard to formulate.  The experience was magnificent, and definitely the high point of the trip so far.

Wednesday night we had dinner at a French restaurant, topped off with Bill Ryan playing the harmonica while I sang God Save The Queen.  The wine everyone else drank was provided by Bob Hussey from his personal winery, who was scheduled to be on the trip with us but decided to spend the time in Kaiser Hospital with pneumonia instead. 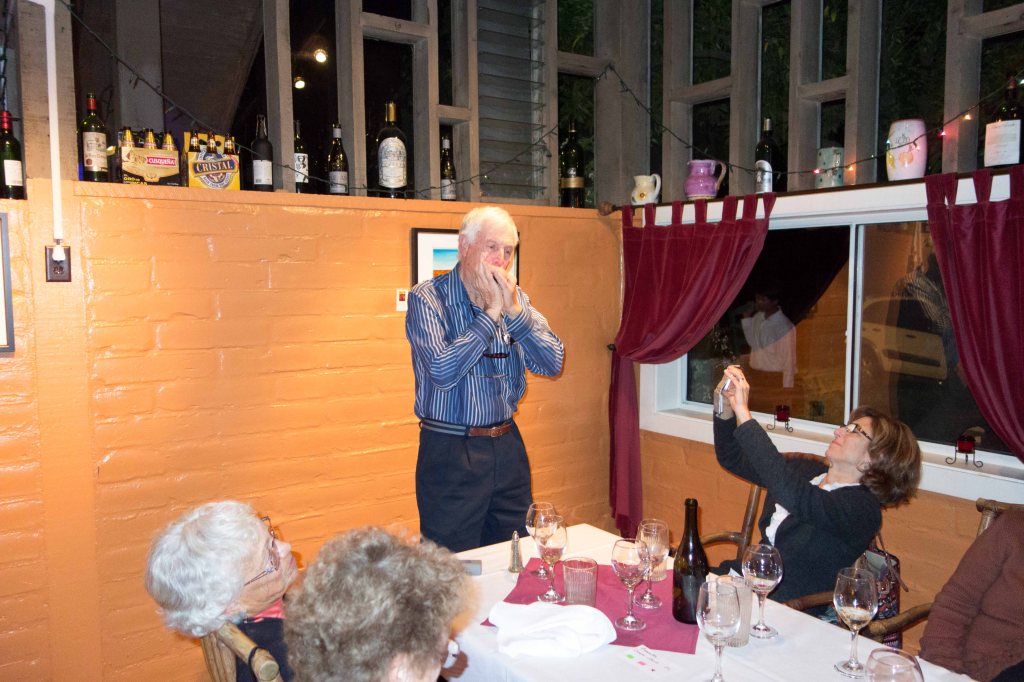 Bill Ryan performing for the crowd

Another very full day, and back to the hotel.  More fun tomorrow.