Life in Orlando, for us at least, is just one continuous party.  It starts with the raucous meeting at the airport, and just goes on and on.

Today, we slept in a bit to get accustomed to the time change, then played on computers for a while, then went shopping.  I was hoping to find some new shorts–the selection here is better than it is at home.  We went to the local mall and were stunned by the lack of customers–you could have shot a cannon through Dillards, hitting neither customers nor clerks.  Nor size 44 shorts, sad to say.  I knew I was the largest man in Ethiopia a couple of years ago, didn’t realize I’d have the same problem in Florida.

Lunch was at a chain sushi joint, Bento Cafe.  One of the most unpleasant meals of my life, because of the incredible noise factor.  There was an air conditioner, or ice maker, or Kenworth semi-tractor in the corner of the room which was so loud and intrusive I would never consider going back.  The food was decent, not great.  They only use Krab®, the imitation crabmeat, not the real thing.  I’d pay more to get the good stuff.  The tray with sugar had only  the pink sweetener, which I think is ghastly.  The design of the place is uber-modern, including a series of hanging lights in front of the kitchen area.  Three of these lights were very obviously burned out, which looked really bad.   Bento was a definite loser, even if they did give Karl a (small) piece of red velvet cake in his bento box as dessert.  I stole it.

We were on our way to the movies to see The Great Gatsby, and were early. So we took a peek into the Corona Cigar Company, better known locally as Scotch and Stogies.  This is a bar that only serves Scotch, with a huge selection of the expensive single malts.  They sell cigars, too. 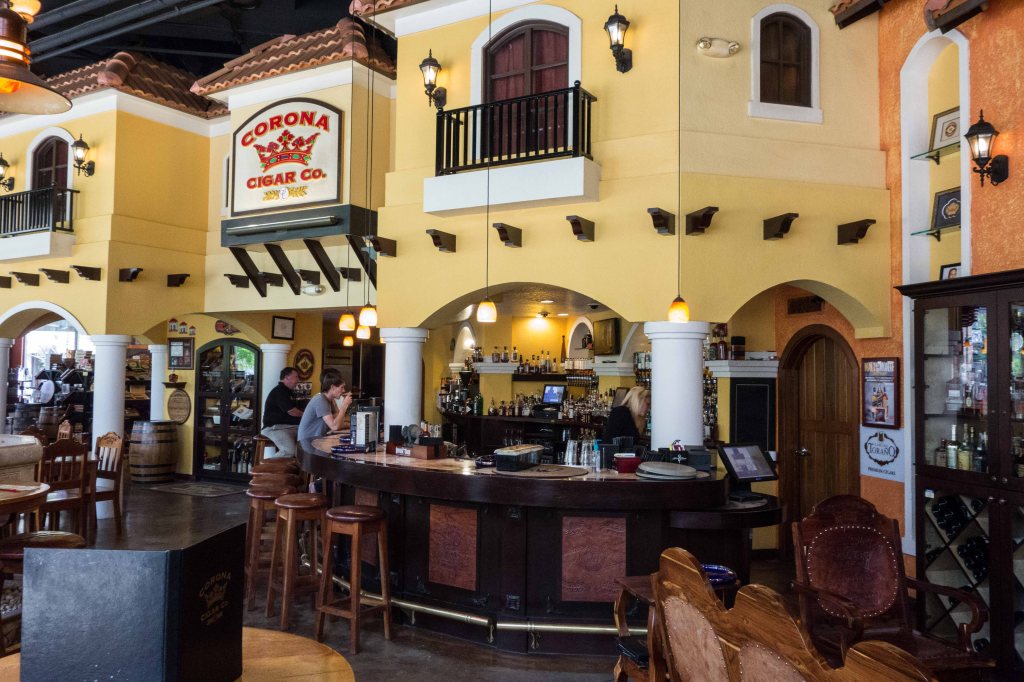 Not a lot of women hang out in this place, it’s so macho it has to shave every day.

The Cuban influence is strong here in Florida; I’ve never seen a store with just cigars before.  Hundreds and hundreds of  boxes of cigars, ranging from $1.00 to a small fortune.

The most expensive stogie in the store–pre-Castro Cuban.  That’s $450 EACH

I’m not a smoker, true, but I just can’t imagine that a 54 year old cigar would still be good, much less worth $450.  This would be an ego purchase much more than a true connoisseurs delight.  The serious cigar smokers have their own, locked humidors on site: 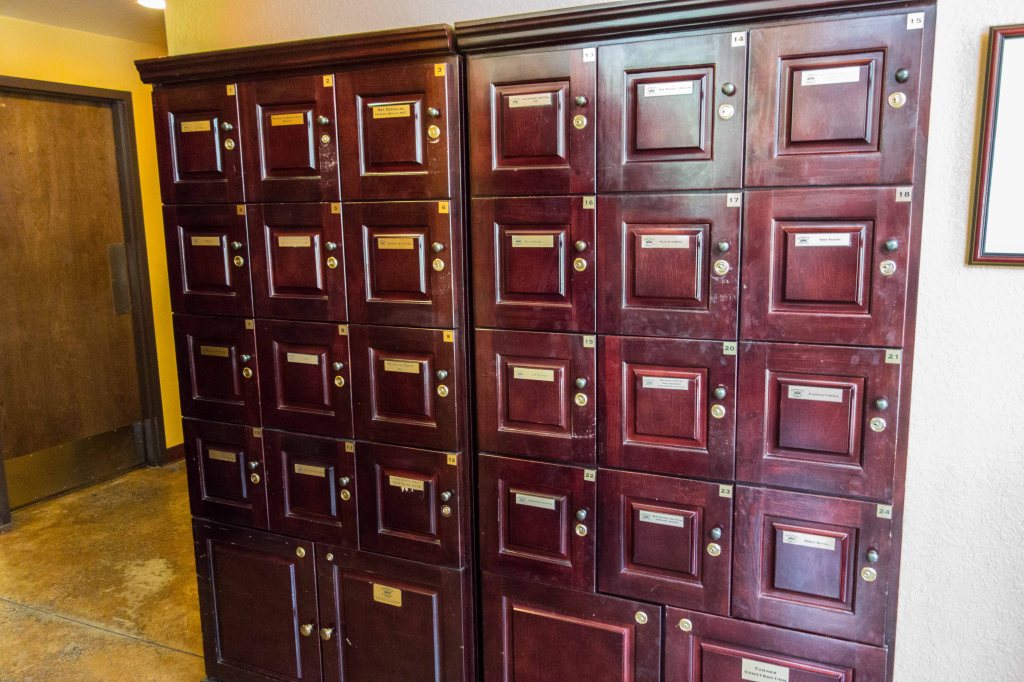 Where the in crowd keeps their stogies.

The name badges on the lockers show a lot of law firms and financial counselors.  More high-testosterone behavior.

Susan and Gail, with their 3D glasses and their ice bucket of Hess Chardonnay. All is right with the world.

Then it was movie time.  The theater is one of the very fancy modern types, with heavy leather seats that lean back, lots of arm rest space and you can even bring in wine, which they sell along with the popcorn and Milk Duds at the concession stand.    Surprisingly, the wine is priced similarly to what you would pay in a decent mid-price restaurant–they don’t try to soak you like they do with the sodas and candies.

Susan and Karl have a friend, Tim, who lives downstairs in the same building.  Tim lived in Ethiopia as a kid, where his parents were missionaries.  When Susan suggested that we should go with Tim to an Ethiopian restaurant for dinner some day, I pushed for today.  Now. Right away.  I’ve been thinking about a plate of shiro and doro wat lately, and this was too serendipitous to pass up.

Picking Tim up at the apartment, we headed out to the most touristy area of Orlando, International Drive, and the Nile Ethiopian restaurant.  It looks just like everyplace I ate in Addis Ababa, down to the TV screens playing Ethiopian music and dance.  I loved it.

Although I am well known as a non-drinker, I make a huge exception for Tej, the honey wine of Ethiopia.  It is served in a small glass flask you drink from, and I was ordering one as we walked in the door.

We let the expert order for us, and got a huge platter of assorted food–this is exactly the way you would get it in Ethiopia: 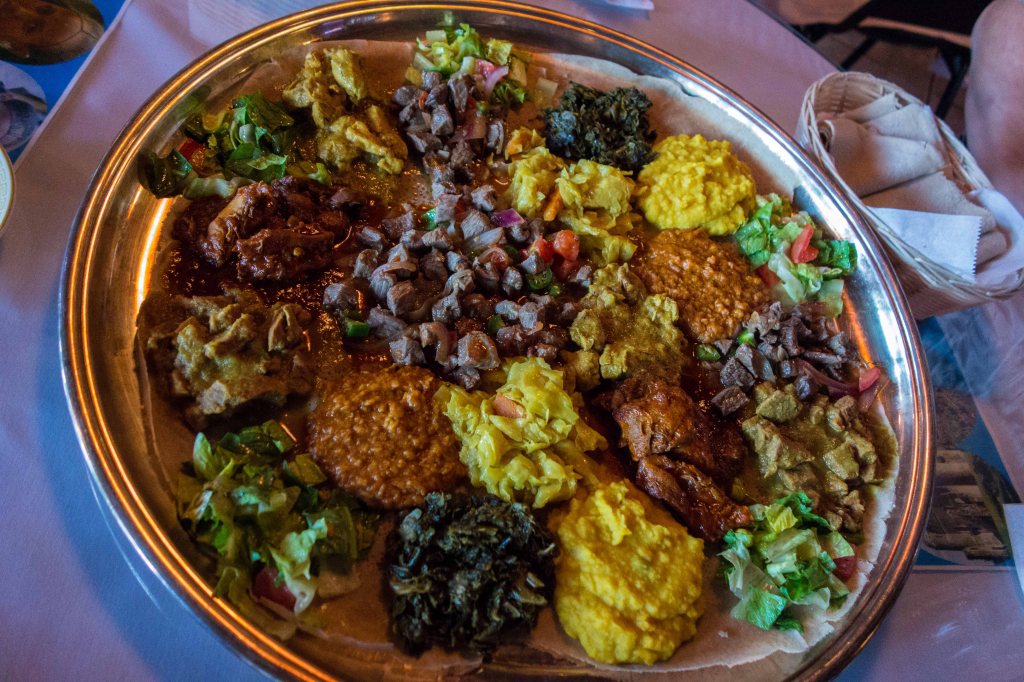 injera by wat, a variety of dishes all to be eaten with the injera bread in the basket.

There are no forks or spoons.  You take the bread (injera), which is more like a wet washcloth, tear off a piece and scoop up some food from the platter.  There are lentils and cabbage and beef stew and lamb stew and chicken stew and spinach and some other lentils and salad and some things you will never identify.  All of it is spicy, some of it is very spicy, none of it was as spicy as it would be in Africa.  There is injera on the platter under the food, which you eat last.  It is soaked with all the juices and is the best part of the meal.

We loved it.  I had three flasks of Tej, which doesn’t have much alcohol but if you try hard enough, you can get a buzz on.  Three glasses is hard enough.

Then we drove home and had frozen yogurt.  Now I’m writing.  That’s enough fun for one day. Tomorrow we’ll do something else.

2 thoughts on “Partying on”