This is the way to make a movie.  Get a good script and let the visuals tell the story.  Use the special effects as something, well, special, not the reason for the movie’s existence.  Build characters and let the audience relate to them.  Have the good guys win and the bad guys lose and virtue triumph.  The end.

Director J. J. Abrams does exactly this in Star Trek Into Darkness.  The first 10 minutes of the film contain almost no exposition, just imagery, and you let the story unwind itself into your consciousness.  Then everything opens up, you get involved in the characters (who you already know, which does make it easier for the director), the story takes over and you are on a whirlwind for the next 2 hours and some, hurtling towards a predestined happy ending that will leave you breathless for the next episode in 3 years or so.

We saw STID in IMAX 3D, which is surely the best way to enjoy one of these booming blockbusters.  Two days ago we saw The Great Gatsby in Real 3D, which is some other kind of projection technique that doesn’t compare.  The first movie always seemed to be reminding me “Hey!! This is 3D!!”, while the Imax production is completely immersive–you don’t much think of the process, you’re just in the movie.  The sound system is magnificent, although excessively loud.  I almost always wear earplugs in the theater, but they are a stunning necessity here.  Even with the best earplugs I can find, it was exceedingly, painfully loud.  I can’t imagine how anyone could sit through this movie without ear protection, but I know why we are creating generations of young people with premature yet profound hearing loss. 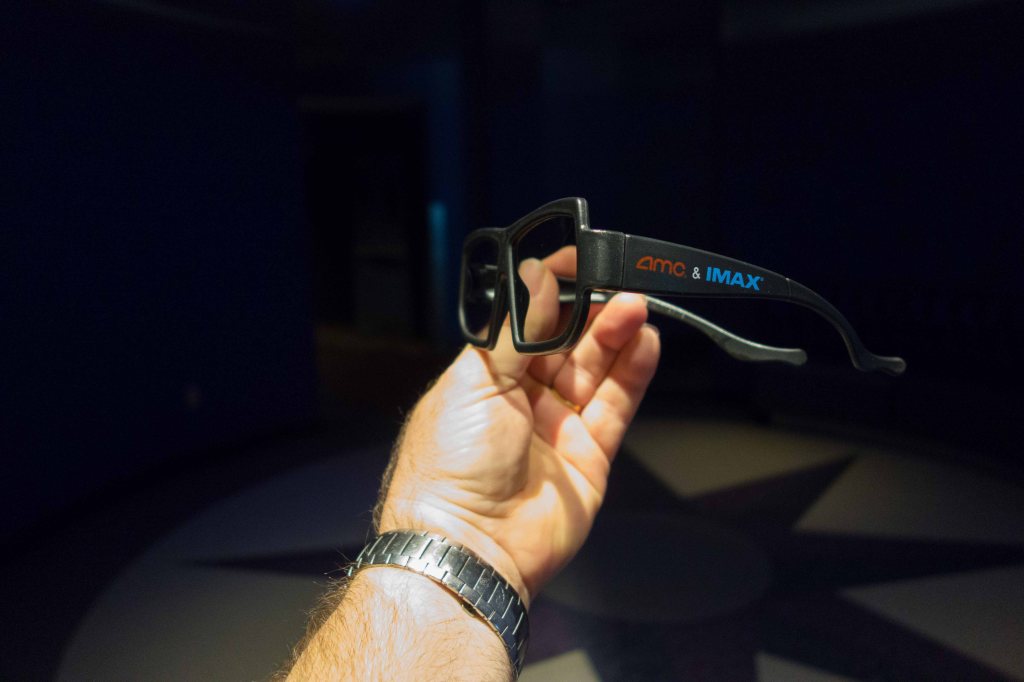 The special glasses for the Imax theater.

Seeing Gatsby, we received our glasses in individually wrapped plastic packages–although they had been worn before, they had been processed, cleaned and re-wrapped.  Going into the IMAX theater, they just handed us these.  They claimed that the glasses are cleaned and sterilized between wearings, but I wouldn’t bet my lungs on it.

Only a heel with the soul of a Klingon would reveal the plot, and that isn’t me.  What is fascinating is that this is a re-work of the second Star Trek movie,  The Wrath of Khan.  The plots are most certainly different, but there are some brilliant similarities and echoes of the first movie in this one.

Chris Pine, as the new James Kirk, does a creditable job, but the real star, to me, is Zachary Quinto as Spock.  Or maybe I’ve just always loved Spock the best.  Zöe Saldana is just too pretty to be Uhura, as far as I’m concerned.  I think they build her part up to justify her paycheck; she strikes me as much less important to the story than the producers want her to be.

There are a couple of first rate bad guys here, but I can’t tell you who they are, that would give it away.

Any movie of this genre depends on great special effects, and Star Trek Into Darkness succeeds mightily.  Importantly, though, the special effects never overwhelm the story or the characters.  This director knows the effects must support the story, not the other way around.

Since this was opening day, we thought there would be a crowd.  Surprisingly, there were only about 25 people in that huge theater at Universal here in Orlando.  I know the crowds will turn out for this movie, just wondering why there weren’t more ardent fanboys for the early showing.

If you are a Trekkie at heart, you will already be planning to see this.  If you aren’t, go see it anyway, and then you will be a Trekkie.  It’s  a really good movie and you’ll like it.  Bring hearing protection.