The trattoria was founded as a roadhouse in 1918, and is still operated by the same family.  Today that means three brothers, great grandsons of the founder,  are in charge, but papa is still around.

In fact, it was papa himself who picked us up–yes, in this tourist area fine restaurants will come get you and bring you home.  Since there are 6 of us, they had to send 2 cars to do the job, and the boss himself was driving the very nice Lancia sedan we got to ride in. 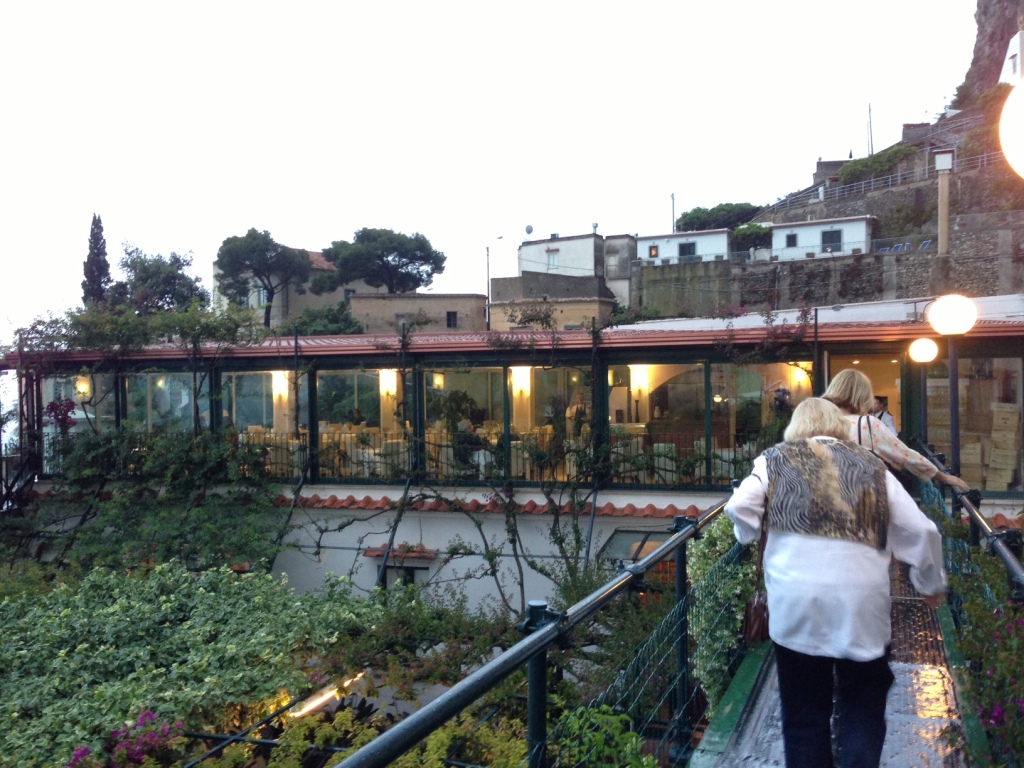 Walking on the bridge to the trattoria

Making our reservation, we had asked for a table with a view.  Since the building, clinging to the side of the hill and built out cantilever style, is all glass, that was easy for them to accommodate.  Our 8 pm reservation was on the early side, and we had the corner table.  Sadly, the bad weather limited the view but we didn’t much care–the food was spectacular.

I thought I’d start with a Bellini, but the peaches weren’t up to snuff for the chef, so he didn’t buy them.  Instead I had champagne and fresh, wild strawberries, which was a very able substitute, if not quite as sweet as I would like. 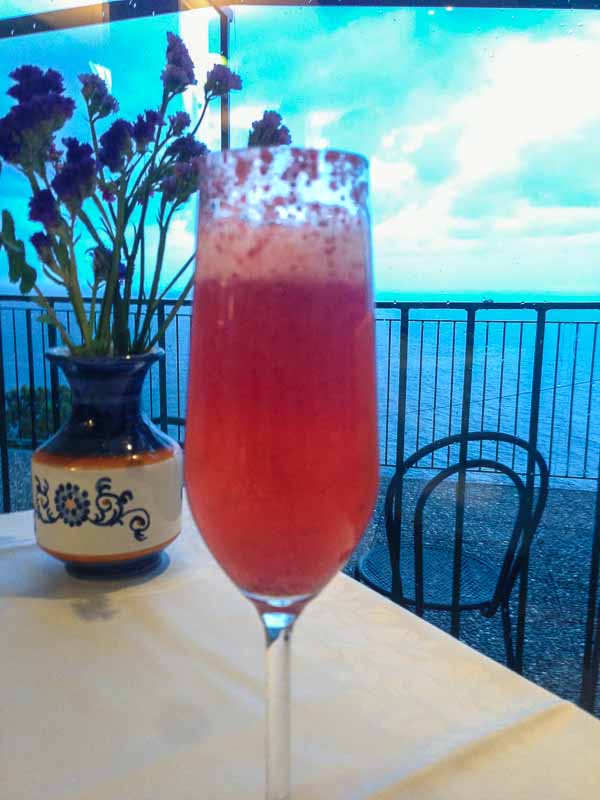 The strawberry version of a Bellini

We chose as an appetizer to have the baby octopus, which was certainly different.  The little beggars were cooked in a tomato broth, and were, in not something to rave about, something to remember and talk about.  They taste pretty much like calamari, as one would expect.  Sort of like eating escargot, the best part was dipping your bread in the sauce. 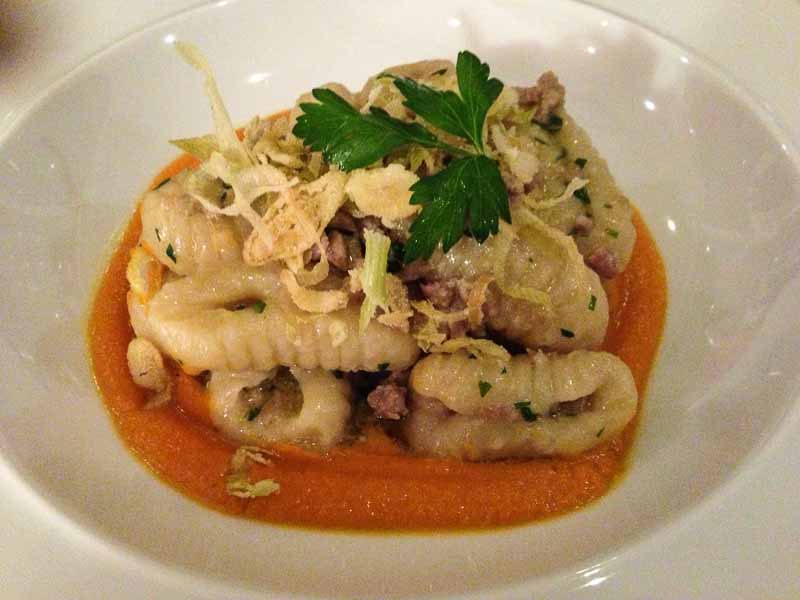 Ndunderi, a heavy, dumpling like pasta, served over pumpkin puree with crispy leeks

I tried the ndunderi, which is apparently a local specialty,  and liked it.  The pasta is not like anything you will experience in the states–it is large and heavy and more like gnocchi than spaghetti.  The pumpkin is sweet and refreshing, while the crispy leeks give a boost to the texture and a bite to the sweetness.

Gail and Brad both had the house specialty, a dish they have been serving since 1965: 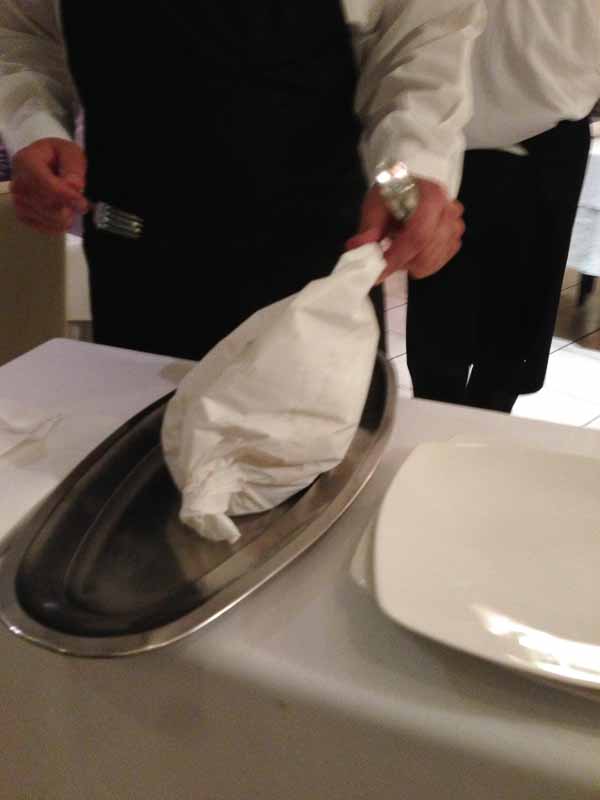 The specialty of the house, spaghetti and clams in parchment served tableside

The spaghetti is cooked, placed in the parchment with clams, olives, capers, oil and wine, then baked.  The clams cook, and the flavors all mix and mingle.  They bring the entire package out to the table and open it for you there: 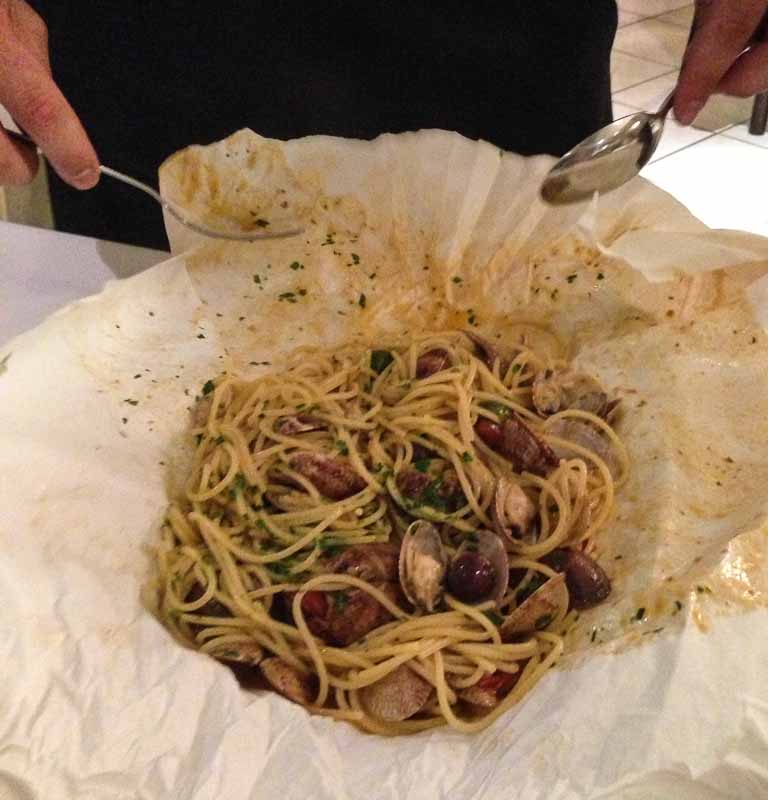 This dish takes spaghetti con vongole to entirely new heights.  When they open the parchment package the room fills with the aroma of the clams and olives, and every bite brings all the flavors together.  It is a magnificent invention. 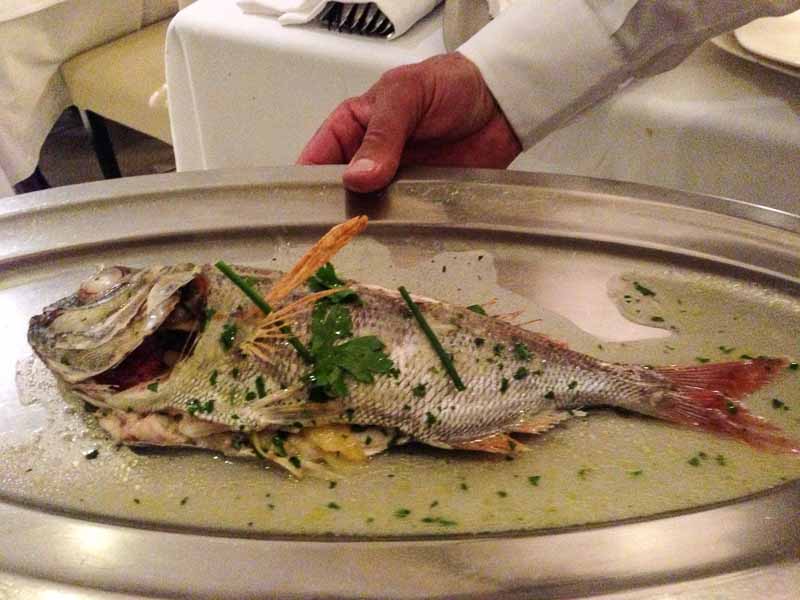 The fish that came out of the sea this morning was bream, so that was the nightly special.  Kate and Chloe shared this one.  The entire fish is presented to the table, then the waiter filets and de-bones it for serving.

An interesting touch of grace: 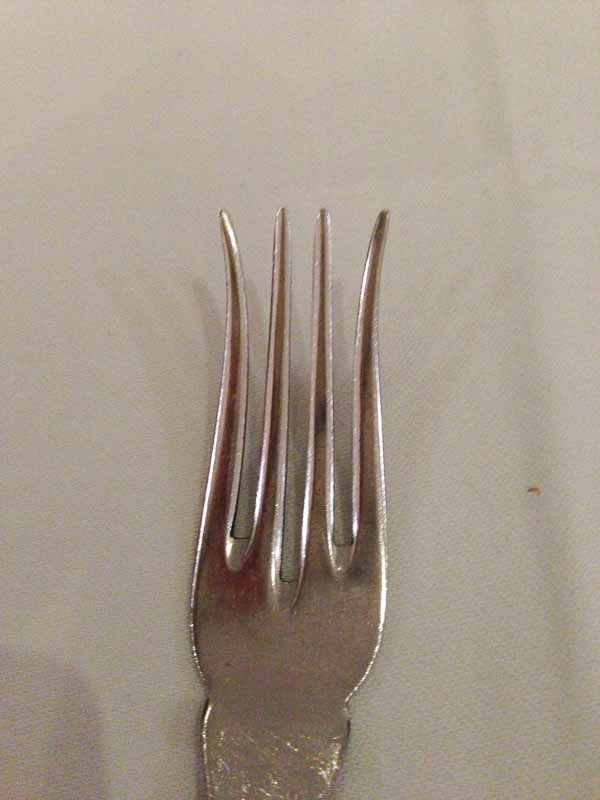 The three of us who had fish received these forks, with outward facing tines the better to hold the flaky fish.  Of such small touches is a great restaurant made. 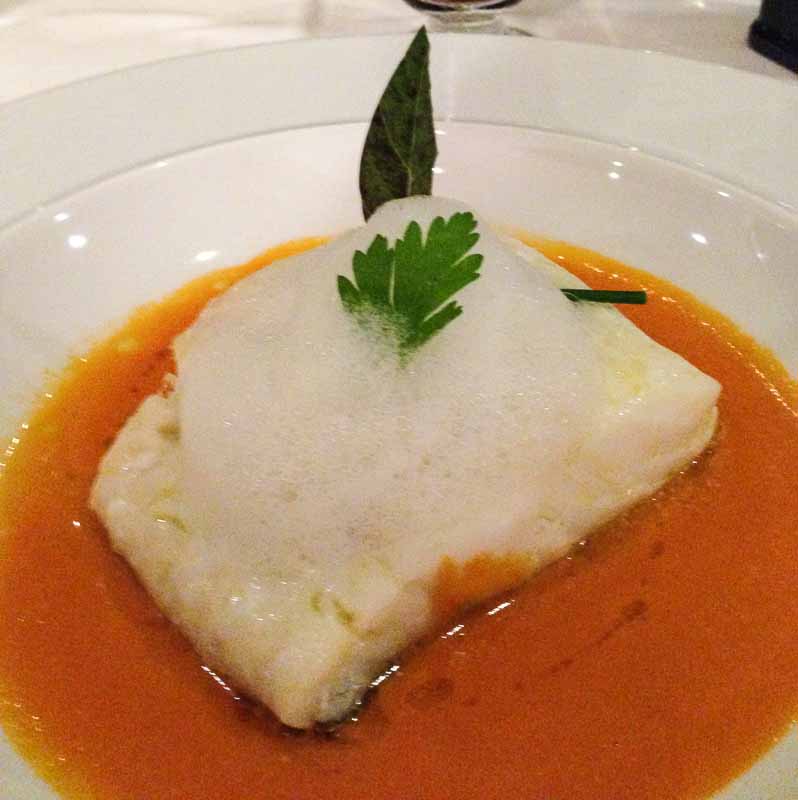 So here modern meets classical.  Chloe and Demi have been enjoying the “crazy water” fish–poached in wine, water, cherry tomatoes and spices.  Chef Marco has re-invented that dish, serving cod cooked, I think, sous-vide, which can be quite salty, over the tomato “jam”, topped with the celery foam.  It was excellent, the mixing of the sweet and the salty was perfectly balanced.

We all had so much to eat there was no discussion of dessert, but the house brought out fresh wild mulberries anyway, and a trio of house made liqueurs–limoncello, an apple liqueur and a melon/cream liqueur.  The limoncello was far to tart for me, and at 32% alcohol too strong.  The apple did nothing for me.  The melon/cream, on the other hand, was heaven in a shot glass. 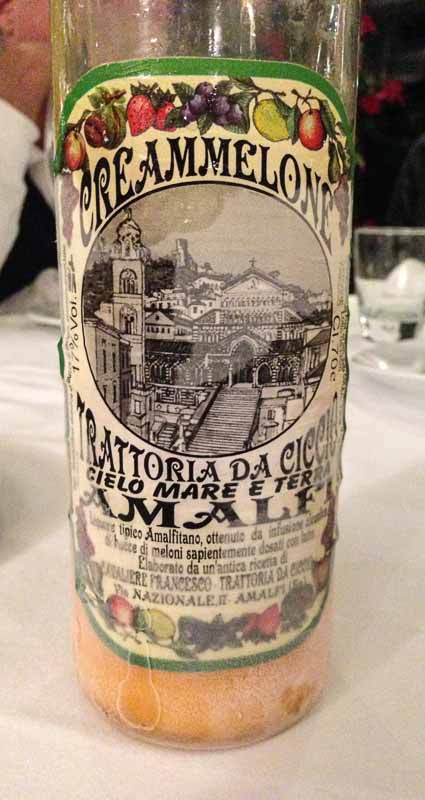 The house made meloncream liqueur

Like biting into a perfectly fresh cantaloupe, this was just delightful.  They keep these bottles in the freezer, along with the shot glasses, so everything is frigid cold, fresh and beautiful.  I could get addicted to this stuff, but I don’t think I’ll ever see it in BevMo.

The meal over, we shook hands with all the brothers and papa drove us home.  Life is good.

One thought on “Trattoria da Ciccio”