Tonight was the Ruth Bancroft Garden annual gala (pronounced gah-la by some, gay-la by others. Take your pick). They told me it was “casual chic”, which I thought meant a silk shirt, patterned silk suspenders and my red shoes. Most of the other men were in coats and ties, which were neither casual nor chic.

The evening started with the usual silent auction, where you have the chance to spend too much on something you don’t need and then feel good about it. We bought five tickets to an A’s game next year. Why five? I have no idea–that’s what the package was. We bought two tickets to Berkeley Rep for only about 50% more than the box office charges. One justifies this insanity because “it’s for a good cause”.

Closing the silent auction, we trooped into the dining room for the traditional meal of a boring salad,  tasteless chicken and some kind of cheesecake dessert. The wine flows freely at these affairs, in the hopes that a well liquored-up crowd will spend more freely. Those of us who abjure the grape are relative pariahs–there’s no profit to be had in providing me with iced tea or Diet Coke.  Garden president Mike Rippey managed to rustle up an iced tea for me, then had to deliver it because the guys at the bar couldn’t be bothered.  There are 10 people at each table, and we enjoyed the company more than the food.

Finished with the meal, the real business of the evening began–the live auction.  Here’s where the organization hopes to raise some serious money.  The first items listed were a new wrinkle in the extraction of funds from the   fine and wise guests.  There were two incredibly marvelous cakes–one shaped like a coyote, one an exact replica of a succulent garden in a dish (remember that the Ruth Bancroft Garden is a world class succulent repository).  These are auctioned off for an insane amount of the elusive spondulicks (yes, I love W.C. Fields) to people looking to make a donation while showing off how much money they can waste.  Although the cakes are indeed works of art, and we had just had dinner and dessert, the purchasers grandly cut the cakes and share them with others.

The first cake went for a mere $100, but the second one got into a bidding war and was finally sold for $1000.  The purchaser was kind enough to send a slice my way. 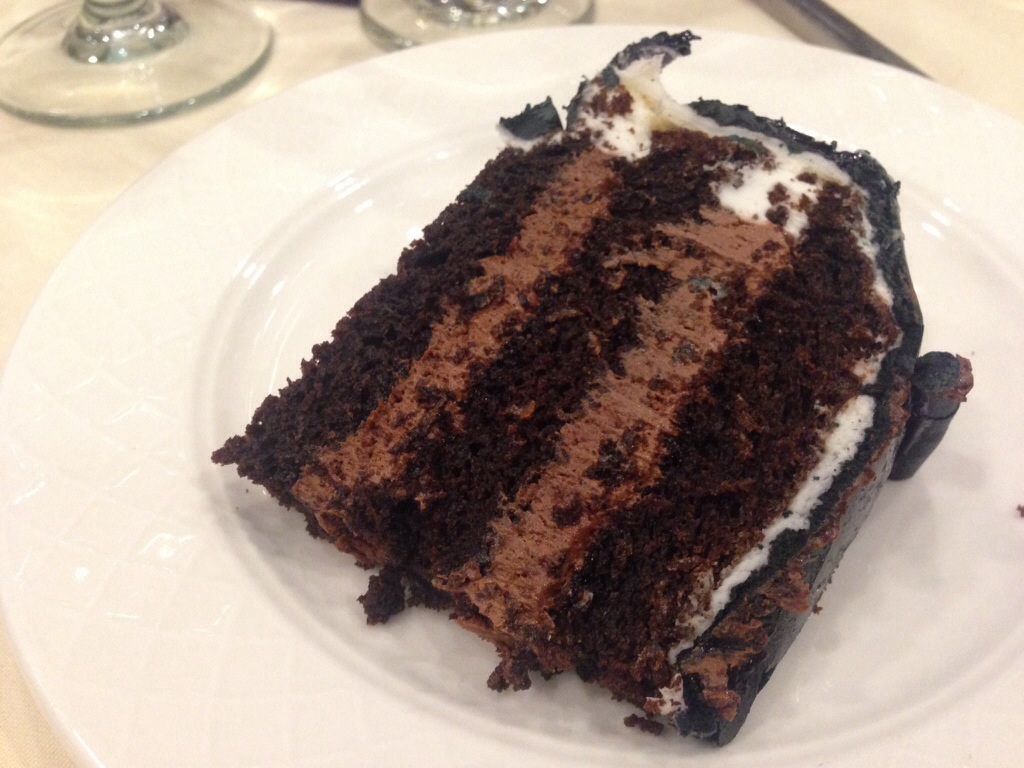 A decent size slice–maybe $75 worth of chocolate cake.

The cake was tasty, but you probably wouldn’t spend a grand on it.

Then some more interesting things were auctioned off.  A week in a condo in Palm Desert went for $3000.  A long weekend in Napa with some golf fetched $1200.  Two great seats for the last Niner game at Candlestick went for the bargain price of $3000.  Money was raised, egos were burnished, everybody was happy.

We escaped just before the last auction “item”, which is no item at all they just try to get you to raise your bidding paddle and donate to the Garden.  They start with $10,000 (not too many takers), then work their way down to $100, when almost everyone is shamed into pungling up a C-note.  Good thing we got out when we did.

Gail was on the board for a few years, then her term expired, and they have just asked her to return for another term.  We like the Garden, and the friends we have made, so she’s happy to oblige.  I guess you’ll get to read about another overpriced pastry this time next year.