No plans Thursday.  Gail and I intended to spend the entire day in our robes, playing bridge online, taking naps and generally puttering.  Fate intervened when Harry Siter called up and asked if we wanted to join him at Rob and Dave’s house.  Then, of course, he had to call Rob and Dave to see if it was alright, but fortunately there was room., so we headed off to Vallejo.

First, though, I had to think of something to bring.  Harry told us he had a large white truffle to make hors d’oeuvres with, and I could hardly show up with a Sara Lee cake or a dozen Krispy Kremes.  Something elegant was required, and there wasn’t much time to be creative. I got a bright idea–devilled eggs topped with caviar.  Little tiny eggs on top of big ones.  Off to the store to pick up  the fixings:

Fish eggs by any name.

I cooked the eggs at home, peeled and cut them and made the stuffing, then took all the different parts to assemble when  we got there.  I’ve never found a way to transport the eggs without making a mess otherwise.

It was a good try, but Harry topped me with his truffles on popovers, and then topped that with caviar of his own. 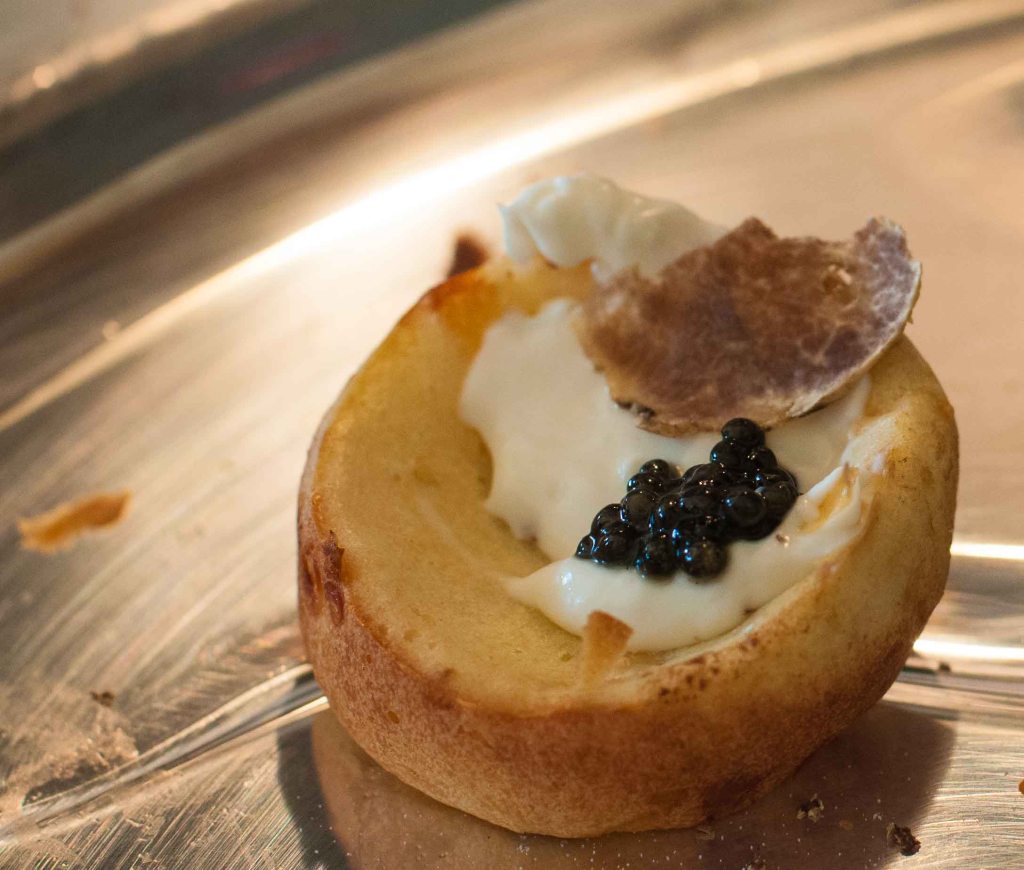 The package the truffle came in was pretty stunning all by itself:

Yep, four grand a pound for fungus.  Notice that they bought 0.04 pounds.

Robin proved you can be creative without breaking the bank–daikon radish kim chi, asparagus and potato chips:

A little fall foliage in the background to set the scene.

We snacked, some drank, there was dancing and carrying on:

Eventually, of course, Thanksgiving has to come down to eating.  The turkey was presented: 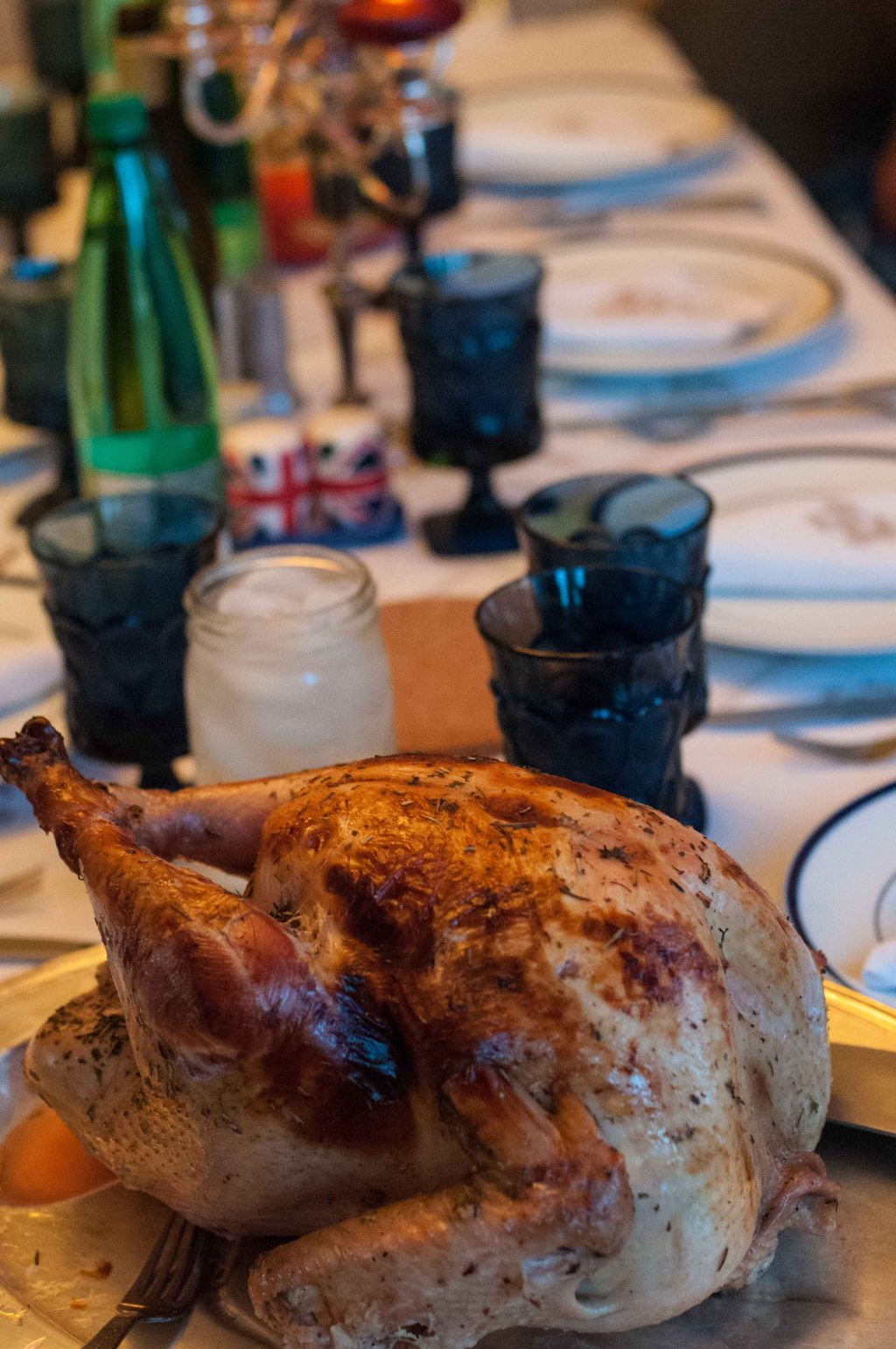 Sticking with the classics here.

Handsome Harry took up position to be Father and carve the meal:

What is a holiday meal with a catastrophe?  We were ready, the turkey wasn’t.  The oven had failed in its sworn duty, and the bird wasn’t cooked sufficiently, so back it went.  Since we’re all very cool California people, we just carried on with a vegetarian meal–sort of. 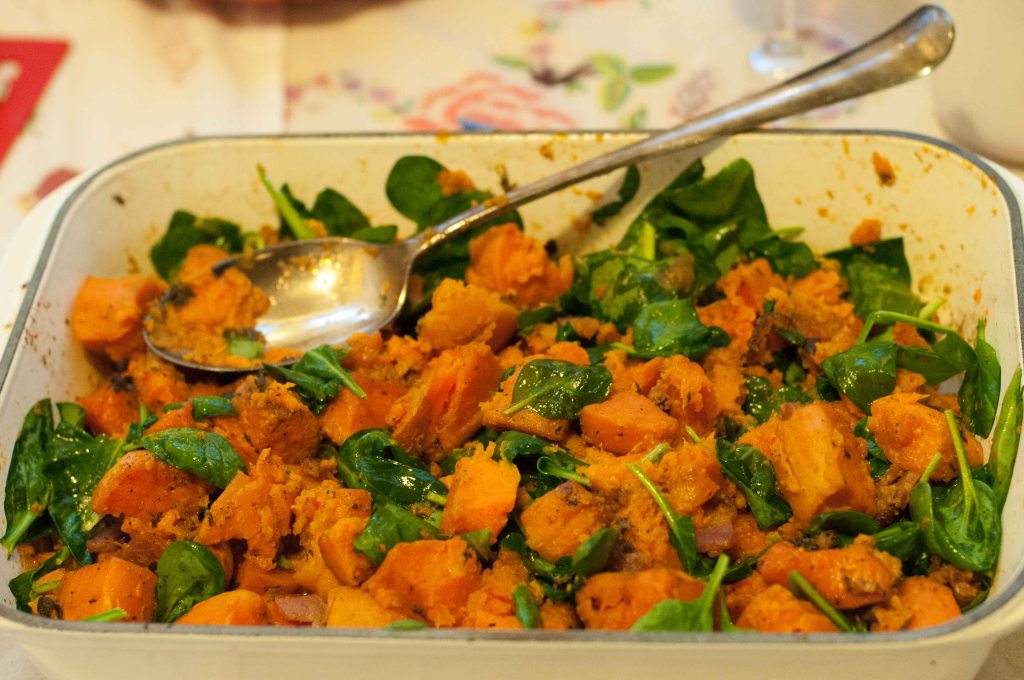 There was enough thick cut bacon in the yams to satisfy any carnivore.  They were fantastic.

The modern version of cranberry sauce.

There was something they called cranberry sauce, but it wasn’t cylindrical and clear, with ribbing showing on the sides, so I don’t really recognize it.  Apparently it was fresh cranberries and oranges, and everyone liked it even though it wasn’t Ocean Spray.

So we ate yams and dressing and cranberries and green bean casserole until we were stuffed, then the turkey finally came out of the oven and we ate some meat.  Maybe a lot of meat.

After that we had pecan pie.  Pumpkin pie.  Apple pie.  They were all created by different people and it would be rude to not try each of them.  I’m never rude.

That’s the story of how a planned day of nothing but online bridge and puttering became a splendid feast with friends, and for that I’m thankful.

7 thoughts on “A Surprise Thanksgiving”