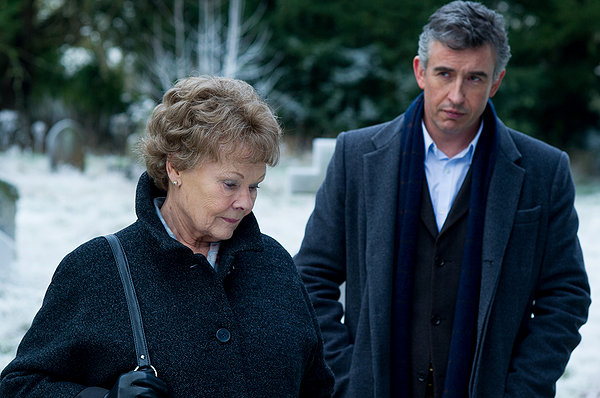 When women take Holy Orders and become Catholic nuns, they take a new name, to which is appended BVM, for Blessed Virgin Mary.  To the students they terrorize, these letters stand for Black Veiled Monster.

I’m thinking of that because we saw Philomena recently, and memories of nasty, evil nuns came strongly back to me.  This is a  pretty good movie regarding the true story of a mothers quest to find the child that was taken from her, but the behavior of the nuns overwhelmed the rest of the film for me.

Philomena Lee (Judi Dench) was a teen-aged girl in Ireland who had the bad luck to get pregnant.  Her family dumped her off into a “home” for wayward girls where she was essentially held prisoner for 4 years as a slave to work 7 days a week doing laundry.  The girls were allowed to see their children for 1 hour a day, until the nuns could find Americans willing to pay a considerable fee to adopt them.  Philomena’s child was about 2 1/2 when he was summarily and with no notice given away; she never even got to say good by.  Eventually, she left the convent, married  and had a family, but never forgot her son.

On the boy’s fiftieth birthday, she is sitting and quietly crying when her daughter walks in and finds out for the first time that she has an older brother.  The daughter tells the story to a journalist (Martin Sixsmith, portrayed by Steve Coogan) she meets, he agrees to take on the human interest story, and together he and Philomena set out to find the son.

The nuns at the convent are no help, claiming that all the old files were destroyed in a fire and now retired nuns from that era are unable to be of assistance.

Through some miracle of journalistic digging, Sixsmith finds the son anyway, but he has died.  He had risen to be the legal counsel to Presidents Reagan and Bush I, then succumbed to AIDS.  Philomena and Sixsmith then track down the woman he was adopted from the convent with, (who is stunningly incurious about her own history), and her son’s life partner, who doesn’t want anything to do with her because he believes she abandoned him.  When he finds out the truth, he shares a lifetime of photos and memories, and recounts how they went to the convent to try to find his mother only to be told that had abandoned him and didn’t want contact.

The denouement of the film is a confrontation back at the convent with the BVMs.  The fire that destroyed all the records was of course a bonfire they created to hide their tracks. Their sanctimonious righteousness, the justification of their lies and deceit, their incessant shifting of the blame for their behavior onto ignorant young girls, just makes me sick to my stomach. Philomena may be a saint who can forgive them, but I’m not and I don’t.