I hate it when I lose

A deeply dedicated blogger would have written 1000 perfect words by now, but I’ve been stuck in idle just sitting in my chair with the window open listening to the rain on the roof, the whine of the jet engines and the occasional thunderclap.  Storms around here come from the south, airplanes land into the wind, and bad weather means the landing pattern for Oakland airport is right over the house–the roar and rumble of the jets just adds to the music of the rain.

It’s hard to believe that we’re running out of restaurants, but lately we’ve been going back to some favorites.  Last night was at Farmshop in Larkspur, for the third time.  We must think it’s pretty good.

Gail is a huge fan of Caesar salads, but doesn’t particularly like the thick stem of romaine lettuce.  Farmshop offers a chicory salad with Caesar dressing that solves all her issues.

Next, she tried the beef cheeks.  It’s a strange sounding cut of meat, but it tastes good, and the presentation is excellent. 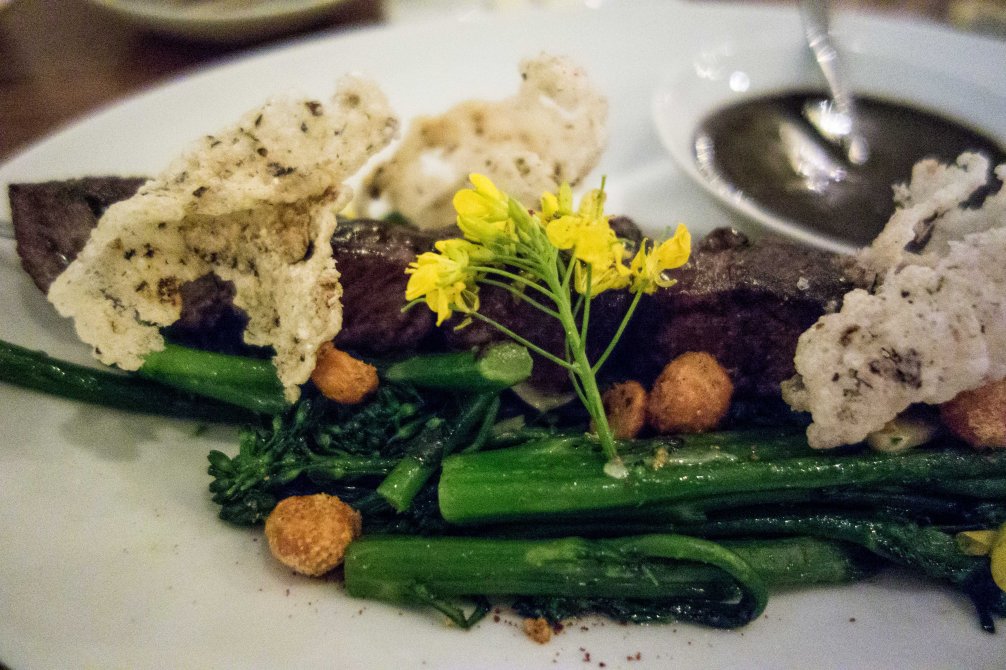 Here’s the part where I lost:  I always try to order the best, most interesting dish.   I had the pasta Carbonara, which was not bad but not great and probably overpriced at $25 for a not-large portion.  Brad had the Porchetta, a huge slab of pork tenderloin wrapped in pork belly, which was vastly superior.  Then Kate had the roast chicken, which is one of the best roast chickens I’ve ever tasted.  My pasta might have been a bit better than the beef cheeks, but I still came in third in the ordering sweepstakes.

Dinner was fine and the service was very close to too good, there were so many bussers hovering making sure everything was just right.  I suppose we’ll go back there for the fourth time.  I’m ordering the porchetta.

Now I can go back to listening to the rain.  Sure hope it keeps up for ages.