Lunch at Al the Wop’s

When it’s a perfectly perfect spring day, what better than to put the top down and go cruising in the delta?

We motored on up to the historic city of Locke, about an hour’s drive from Lafayette.  Locke was created by immigrant Chinese just after the gold rush: that’s when the levees were created to reclaim fertile farmland from the waters of the American river.

Main Street in Locke, mostly unchanged in a century

The proverbial other side of the street

Riding atop the levees on a warm day is just a joy, and if it’s nice in a convertible, it’s fabulous on a motorcycle, which explains why you see some many of them.  These aren’t the rat bikes the Hell’s Angels rode, nasty retired CHP bikes that you could pick up for a few hundred dollars, strip down, modify and roar around town.  No, what you mostly see are brand new $30,000+ Harleys, covered in chrome and embossed leather and driven by rich guys who want to seem like tough guys.

As the motorcycle gang becomes more like the Kiwanis.

The place to eat, to see and be seen, the hot spot in town, is Al the Wop’s.

It isn’t hard to find

Okay, it isn’t a chic boite, it’s a bar, and a dive bar at that.  The music is loud, the customers are louder, the bar stools are worn and the place is famous for offering grilled bread served with Jif peanut butter and a jar of jelly, make your own sandwich.  They do seem to be trying, in a spirit of political correctness, to change the name to Al’s Place.

Al’s also serves steaks, and burgers. Gail and I had burgers, which seemed appropriate for a Saturday afternoon. They come on the same huge, thick slabs of grilled bread, accompanied by fries overcooked in oil that needed changing 3000 miles ago. 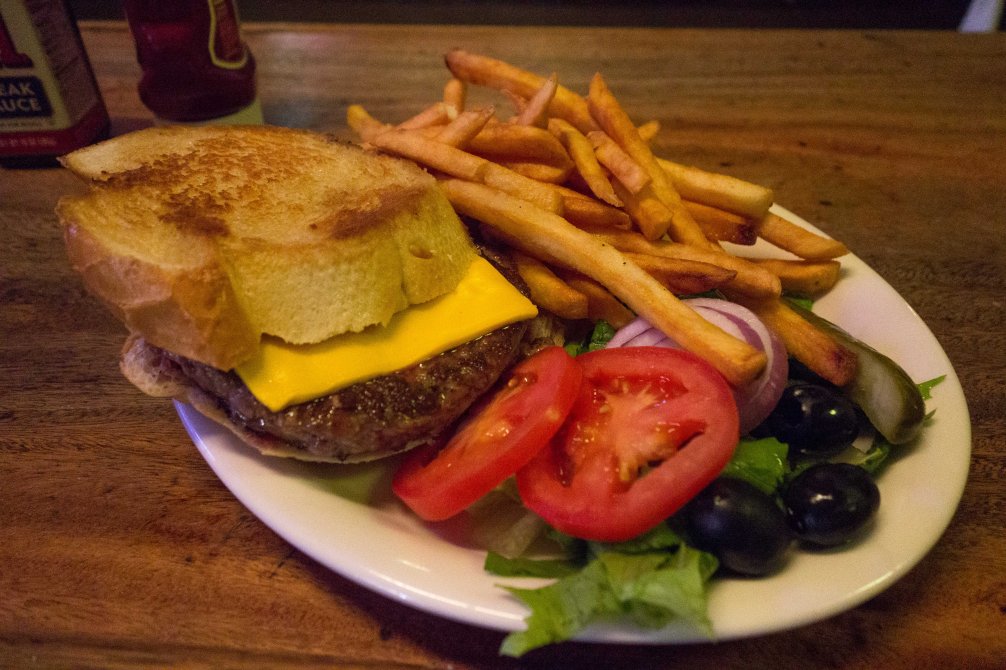 The burger was good, the fries not so much.

Being one of those boring non-drinkers, I don’t spend much time in bars, but I think this is one of the good ones. 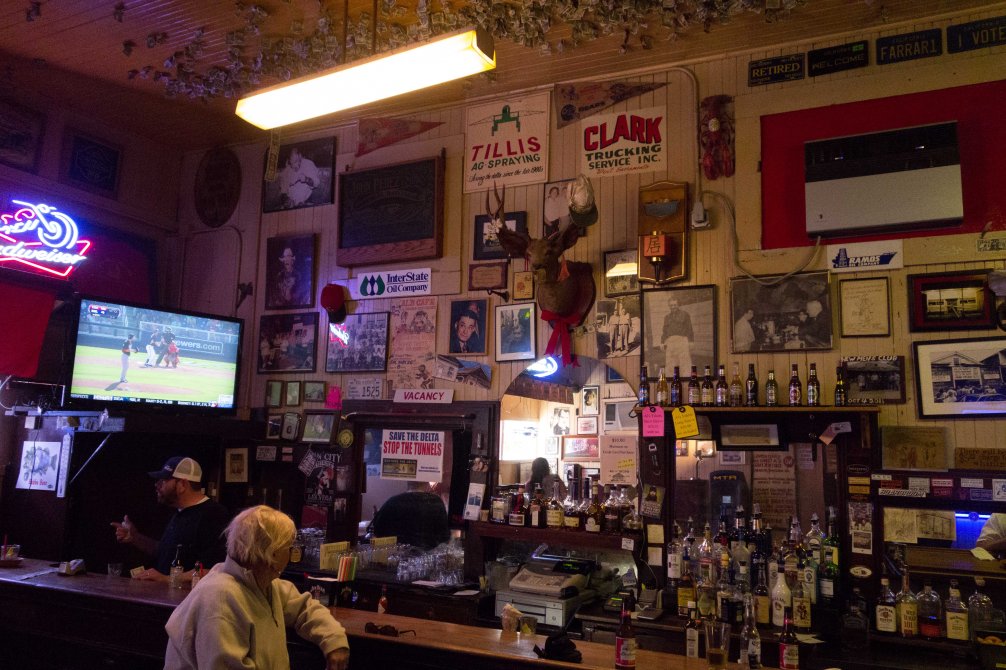 This is what a bar is supposed to look like, I think.

Even the ceiling is appropriate.  I don’t know how they get those dollars up there, or why.

The entire ceiling is covered with money. How do we get people to do this at our house?

Even the bartender (who may well be the boss) looks the part:

Bubba, the bartender. You just knew he would be named Bubba, didn’t you?

Besides Al’s, Main street has a couple of antique stores, two museums of the Chinese history of the area, a Chinese medicine office, and empty storefronts.  It’s more than sleepy, it’s comatose.  One of the antique stores had a “back at 3” sign out, except it was almost 4.  If you aren’t open on Saturday afternoon in Locke, there’s no point in ever being open.

Leaving Locke, we motored north on Hwy. 160 towards Sacramento.  We passed through Courtland, and noticed this building:

An amazingly incongruous building in the middle of nowhere, towering over the miniscule burg of Courtland.

This part of the delta is pear country–we passed miles and miles of the gnarled trees, bursting out in unseasonable bloom.  Gail, the classic farmers daughter, kept wondering why we saw blooms but not leaves on the trees–an observation that would have escaped me entirely.

Well, it turns out that if you want to know something local, find an old man walking his dog and make sure you have the time to listen.  We were very fortunate to stop and ask this man about the state of the world, and pear trees. 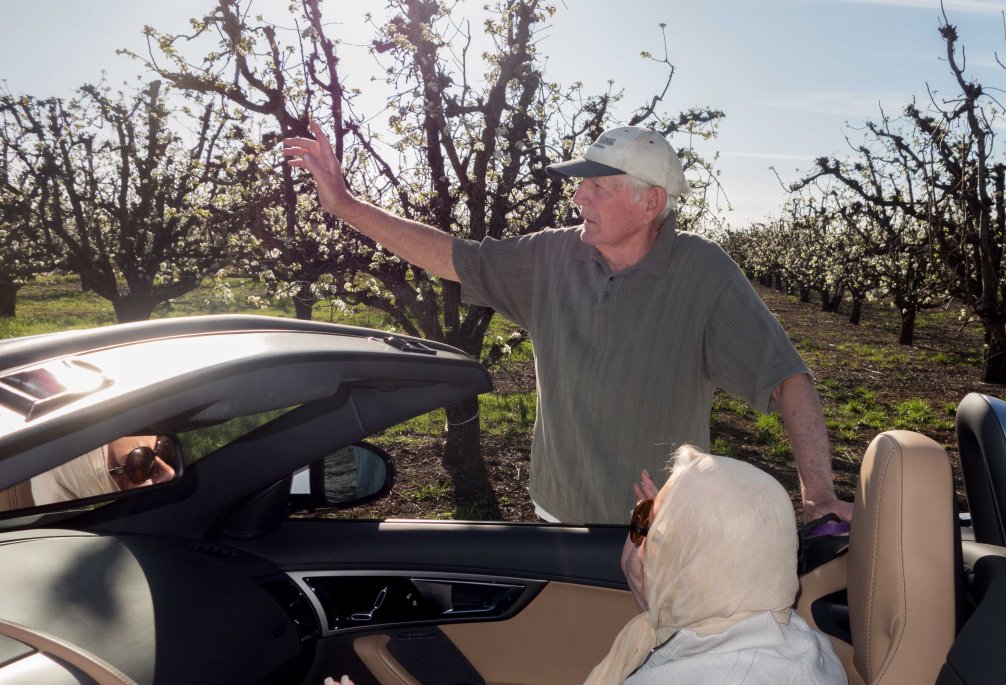 Walking wisdom, with blooming pear trees behind him.

The answer seems to be global warming–it’s so warm out that the pear trees are in blossom before they are ready to open their leaves.  We learned about the “tunnels”, the latest scheme to take water from the delta and give it to southern Cal.  It isn’t popular in the area–there is water in the delta is already unacceptably salty in too many areas, and shipping more water south will perniciously worsen the situation.

Back to the pear trees: here’s a photo where you can just see a couple of leaves trying to unfold which the blossoms are already full: 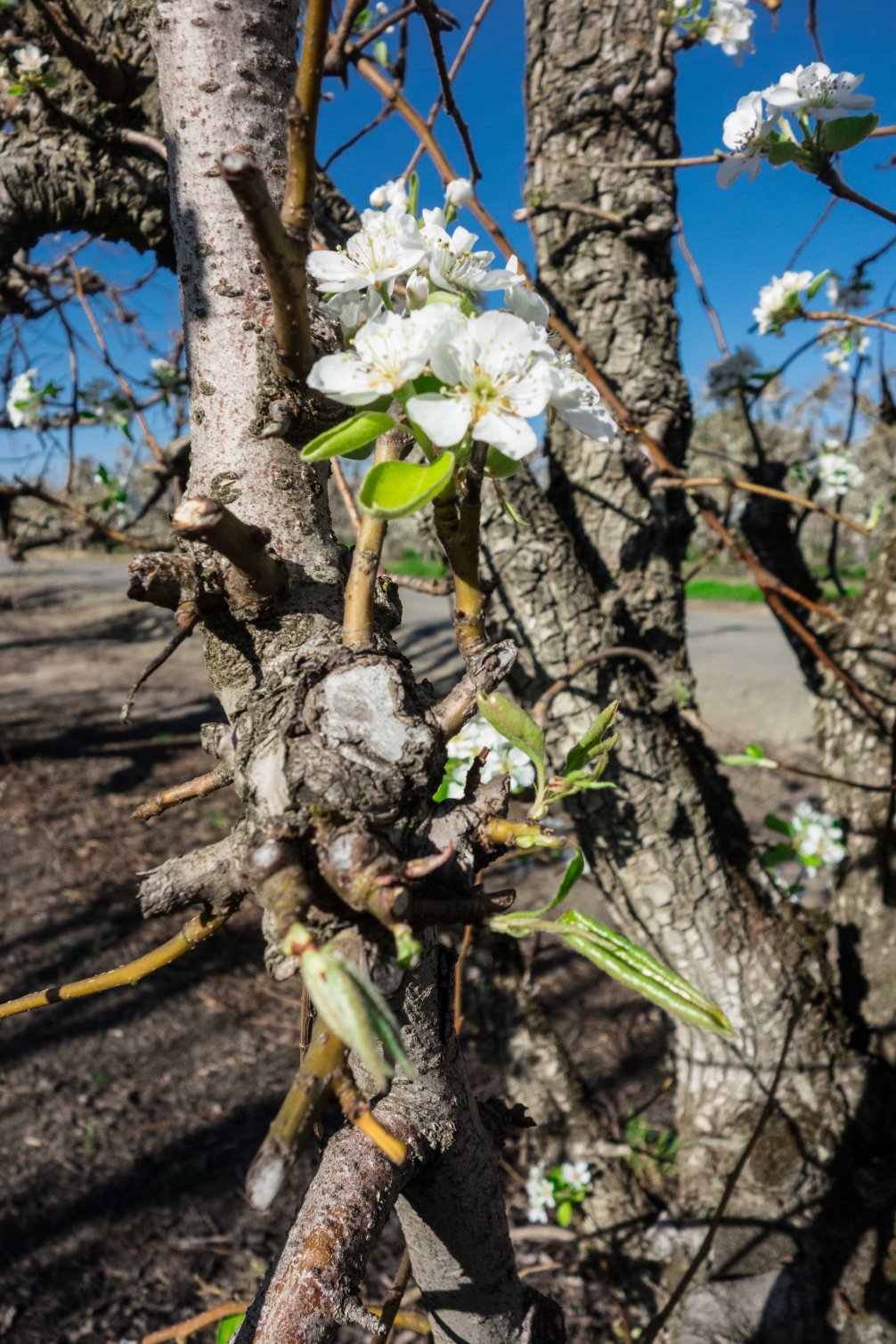 Too much blossom, too few leaves.

After all that adventure, we cut over the Interstate 5 south, then took highway 4 and Marsh Creek Road home.  A great big circle with only a short jaunt on the freeway, the whole trip was about 4.5 hours.  Not exactly an adventure in Cuba or Ethiopia, but a wonderful, interesting, educational and tasty way to spend Saturday.  Go see for yourself.  Tell Bubba I sent you.

2 thoughts on “Lunch at Al the Wop’s”