A thousand and one nights

Well actually, 1001 posts.  That’s right, the last one was my thousandth.  Amazing how much I have to say, but persistence pays off.  Sometimes it feels like 10 posts a year for 100 years, but it’s really only been about 5 years.  Thanks for being here.

Nap over, we went out to dinner at Baia, a Portuguese restaurant recommended by the hotel concierge.  The Portuguese were the first Europeans to see Cape Town and the Cape of Good Hope.  Although they colonized Angola to the west and Madagascar to the east, they left this area alone.  Guess they weren’t interested in diamonds and gold.

Waiting for Mike to join us, I got one good photo:

A simple yet gorgeous design for a candle.

The candle is just floating in some colored water, but it looks clean and nice.  The restaurant then turned on the heaters, and everything turned red, so no decent photos.

Which is a shame, because the food was excellent.  I had the gazpacho, which was perhaps more pureed than I would have liked.  Then the langostinos, which are like large shrimp but taste more like lobster–I really like them, and they aren’t particularly available in California.  Other people had the seafood platters, with shrimp, langostino and lobster.  We were all quite happy.

When on place hits on a good idea, others follow.  The London Eye is an enormous Ferris wheel, and must be successful because Seattle built a huge one on the waterfront, and now there is one here. 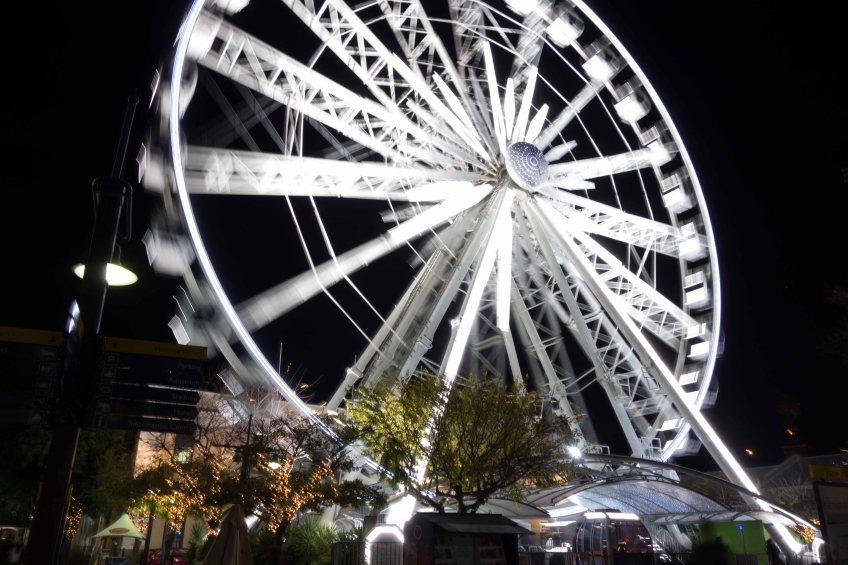 They look better at night.

Back at the hotel, we stopped in at the bar.  There is good news and bad news.  Here’s the bad news: this is a DOUBLE Amarula over ice.

A double. Really and truly–I made the barman show me the shot glass and I measured the booze back into it.

When I drained it, which didn’t take long, I went back and ordered a “double double”. It lasted somewhat longer.

The bar is named “Whisky” for its collection of fine spirits (although they won’t have any Bernstein’s Double malt Scotch for Mike).  We first sat in the front of the bar, where there was an extremely loud band, but eventually found our way to the much quieter back room with the fireplace.

This bar has an extensive wine cellar, which you must walk through to find the restrooms.  The racks are all locked, of course.

There is another room, as well.\\

Turning around from this vantage point, there was a window into the small bar area:

Tomorrow I have something special planned–I have retained a “fixer”, a person who will take me out to take photographs of the people and places around here.  He is a photographic professional who does this for a living, knows how to get into places and how to get me out of trouble.  I’ve been looking forward to this for a year.  Read all about it tomorrow, in post #1002.

2 thoughts on “A thousand and one nights”