Mike, Linda, Gail and I have a particular thing we enjoy–those revolving restaurants on top of high towers.  We’ve had some very interesting meals while slowly rotating in Vancouver, Seattle, Montreal, Toronto, Dallas, Louisville (OK, that didn’t really move, they just said it did) and a couple more I don’t remember.  So it was only fitting that last night we tried the Top of the World restaurant here in Las Vegas.

The restaurant, though well reviewed and recommended, sits atop the Stratosphere Casino, an 800 foot monstrosity that has never quite made it here. The tower/casino is well north of the big hotels on the Strip, and seem to be trying to raise tacky to an art form

I drove in, and headed for the valet line, parking behind a half dozen other cars.  Quite some time later, I noticed that there was nothing happening, so I backed out and just pulled my car up in the middle of the walkway and got out. This got the valets attention–he wasn’t pleased, but I gave him my keys and he had little choice but to take the car. Sometimes you just have to be proactive.

The other three had gone ahead, so I was left to my own devices to find the elevator to the restaurant. There are no signs in the casino, no way to find out where to go. You just wander and wander, vainly asking employees who vaguely wave off in the distance towards, perhaps, some entrance.

Circling around the entire place, passing (as management clearly planned) each and every one of the tacky, garish, gaudy stores selling tacky, garish, gaudy crap, I eventually stumbled upon the reception desk for dinner–and was ahead of the rest of my crowd. We joined up, and were led to “security”, where my tiny pocket knife was confiscated “for your safety and mine, sir”. Arrant stupidity is not limited to airports and the TSA.

Finally harmless enough to be allowed to eat, we went up to dinner, which is on the “106th” floor, but of course the building isn’t that tall, it’s just another marketing lie.

Enough of the whining.  How was the food?  Great.

The restaurant itself is beautiful–done in blues and whites, very modern and chic.  Our waiter was swift and competent. The view would be much more spectacular at night, when all of Vegas is lit up, but we had to get back to bridge so we were there in daylight–and the view was still wonderful.

A great bread basket is a good start.  Just look at this beauty: 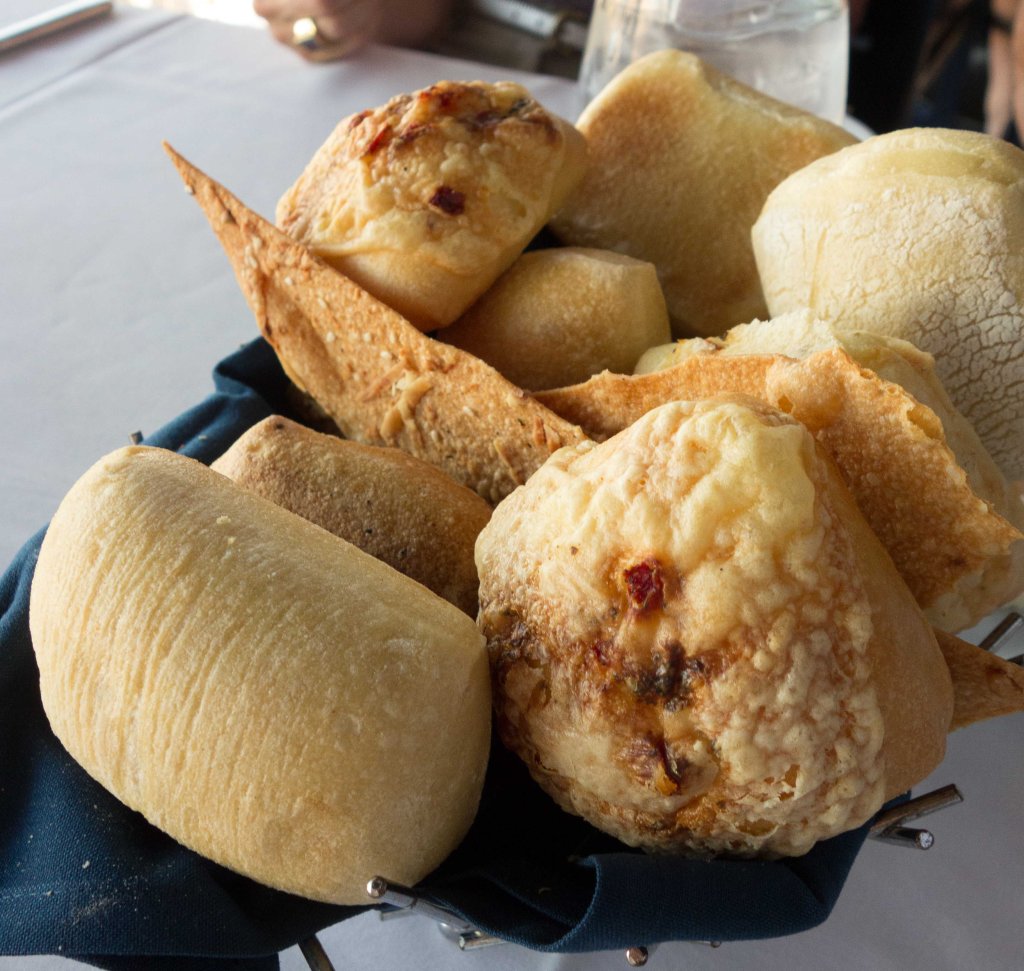 That’s some good baking going on.

With bread comes butter, or some facsimile.  We got three concoctions–one with garlic, one with orange, one sort of plain.  Don’t try the orange one. 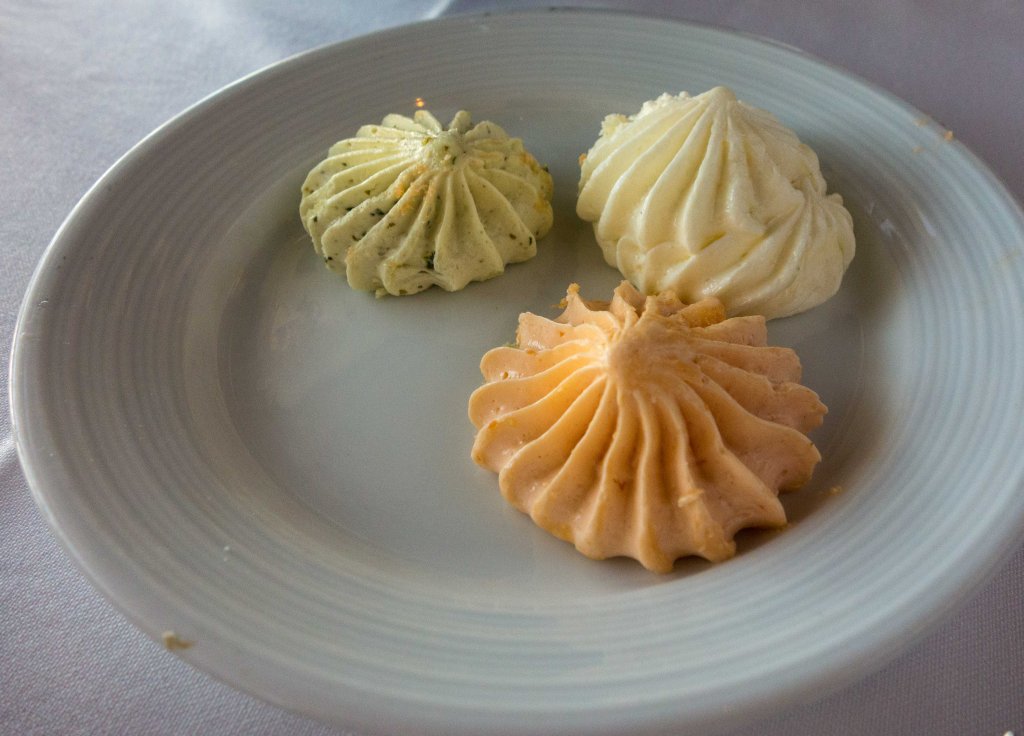 Making the butter fancy to class up the joint.

I started with my usual, caprese salad. This one came with incredibly ripe, perfect watermelon to go with the heirloom tomatoes, fresh mozzarella, toasted pistachios and a sherry vinaigrette dressing. 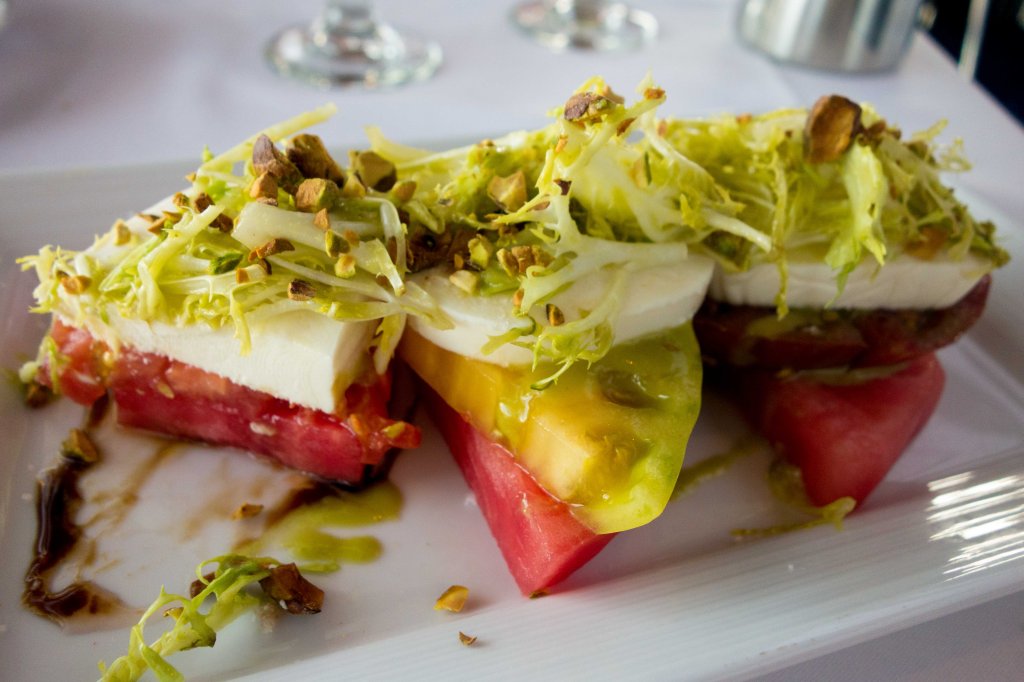 I’m a major connoisseur of caprese salads, and this one ranks with the very best. It’s more than large enough for two to split, but who would want to share something this good?

On to the entrees. I had the Scotch Salmon, with mango and green papaya slaw, pea guacamole and roasted jicama.

A most inventive salmon dish.

The mango green papaya slaw combined two of my favorite fruits, the salmon was perfectly cooked and the roasted jicama was like a healthy french fry dipped in pea guacamole, whatever that might be, but it tasted tangy and bright.

Gail had the smoked rack of lamb–which means I got a couple of chops, and they were, if not fantastic, certainly different. Lamb is rarely smoked, because it’s too delicate a flavor and easily overwhelmed, but I’ll certainly give the kitchen points for creativity. The accompanying ragout was another standout.

We also noticed that the steak knife they gave Gail was more than twice the size of my little pocket knife.  I wonder if anyone in management has ever considered how stupid, bureaucratic, incompetent and unthinking they must be to continue this insulting foolishness about “security”. 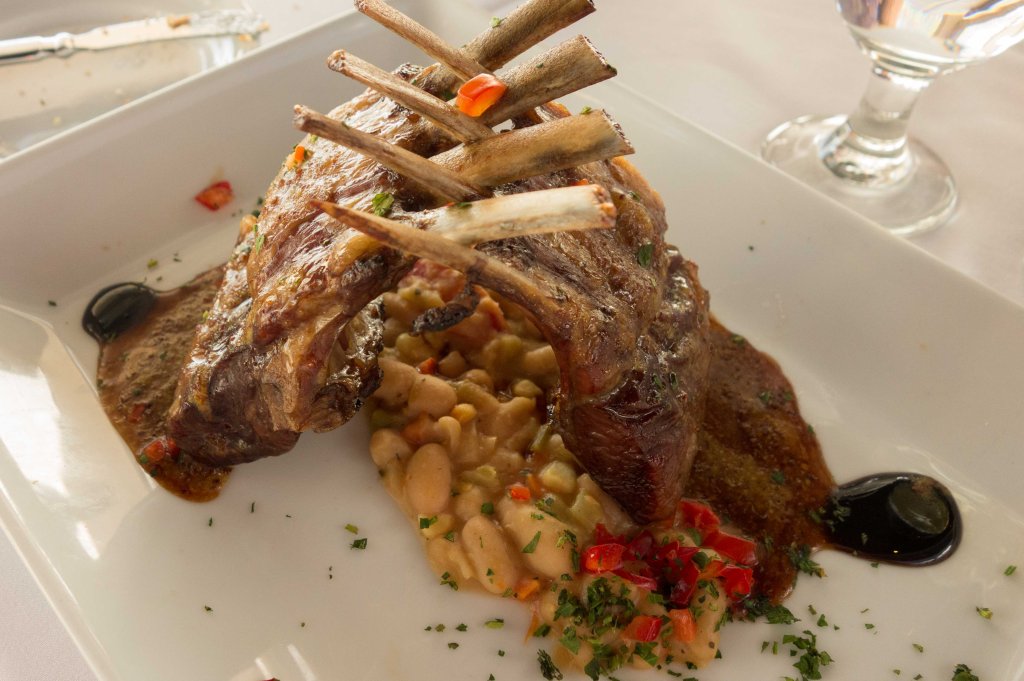 It is more than mildly disconcerting to look up from you dinner to see a body flying past the 100th floor windows, but that’s all part of the show here.  Would-be daredevils can get all suited up and hooked into a harness attached to stiff wires, then jump off a platform and “fall” safely to the ground.  If we had more time I would have tried it myself, maybe.

Jumping off an 800 foot tall tower just for the heck of it.

Dinner was very, very good. The Stratosphere makes it as hard and unpleasant as possible to get there, but the meal is worth the trek.  The good news is that once you find you way up, they tell you where the secret elevator is to get out easily, redeem you car and go back to playing bridge.

The Top of the World is pricey, which is pretty standard for revolving tourist traps. But I’ve paid more for less interesting, creative, sparkling food without a view. Just don’t bring a pocketknife, they might think you’re a terrorist, bent on hijacking the tower to Cuba.