I could have watched all night 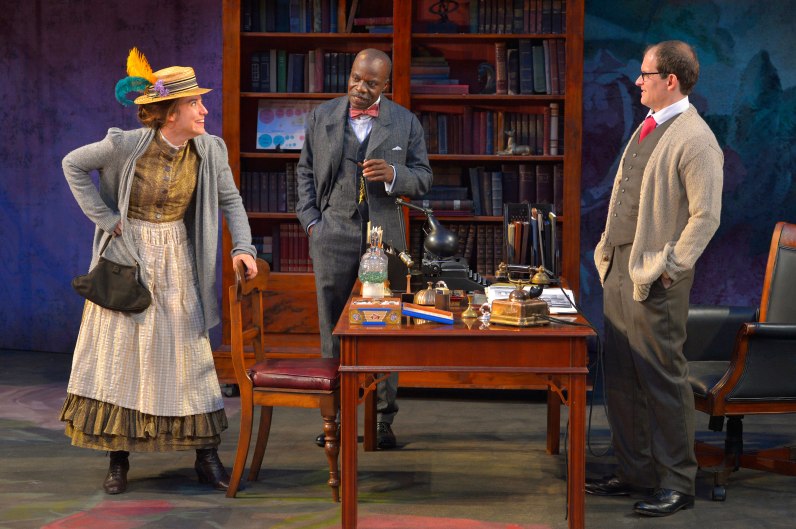 Mother took me to see My Fair Lady when I was 12.  It was my first experience with live theater.

On my first trip to London, I got lucky and scored a rush ticket to Pygmalion, starring an astoundingly beautiful Diana Rigg.  I can still picture her, in the whitest ballgown imaginable, sitting on the sofa with a single tear coursing down her flawless cheek.

I got to see Rex Harrison as Professor Higgins on his last tour in the musical.

So you might say I’m pretty well versed in this particular piece of the dramatic canon, and you can take my word for it that Cal Shakes has done a fantastic job in its current revival of Pygmalion.  It is closing this weekend, so you better hurry up and get your tickets.

They have the A team performing.  When the supporting cast is L. Peter Callender (Col. Pickering) and James Carpenter (Alfred Doolittle), you know you’re in for a treat.  The entire cast is strong, right down to the stagehands in full period costume as they change the bare stage into Covent Garden, an office or a drawing room.

George Bernard Shaw was an early feminist: Pygmalion is a story of self-actualization.  Eliza (Irene Lucio) might be of low station in life, but she is making her own way unaided.  Her “lessons” with Professor Higgins (Anthony Fusco)  improve her station at the likely expense of her independence, but in the end she refuses to live in the shadow of Henry Higgins and stands on her own.

When Lerner and Loewe made a musical out of the play, they changed the ending, making Eliza weaker and had her end up with Higgins.

The Cal Shakes interpretation by Director Jonathan Moscone takes a much more modern view, not only portraying Eliza as strong and self-sufficient, but drawing Higgins as a misanthropic, unpleasant, unlikeable, self-centered ass totally devoid of social skills–a caricature of a stereotype. He is accustomed to getting what he wants by walking all over people, and can’t understand how it can be that this “piece of squashed cabbage” he has turned into a pseudo-Duchess can refuse to knuckle under.

Higgins is controlled by his strong and wise mother (Sharon Lockwood), who sides with Eliza in a strong show of sisterhood and takes her in when she flees the Higgins household.  Even Higgins’ housekeeper, Mrs. Pearce (Catherine Castellanos) stands up to him constantly with feminist righteousness so he doesn’t run roughshod over Eliza.

Over it all, what shines is the acting.  The seasoned professionals of the permanent cast bring such quality, such expertise, that everything they do, every small motion, every inflection is perfect in service of the script.  Nothing extra, nothing superfluous, no showboating, just solid professionalism.

You’ve only got a few more chances to see this show.  Don’t let them slip by you.

2 thoughts on “I could have watched all night”