Okay, that may not be all true, but who can resist?

Buda is the rich side of the river, where the hills and castle, cathedral and money all reside.  Pest is the where the hoi polloi live, a broad flat plain that stretches hundreds of miles.

The ship comes into Budapest at night because all the big buildings are close to the water and brilliantly lit up.  Everyone goes up to the sun deck to watch the spectacle: 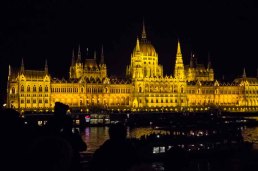 A traffic jam of river boats seing the sights 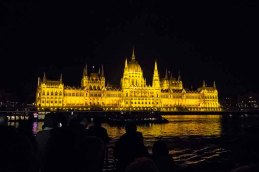 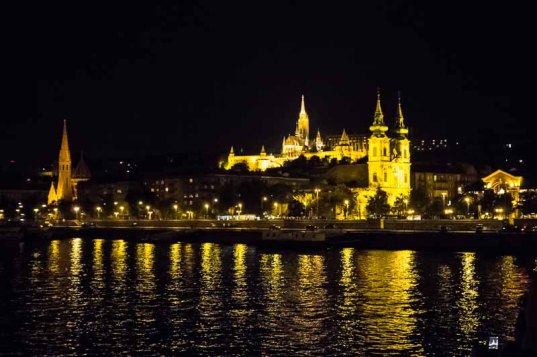 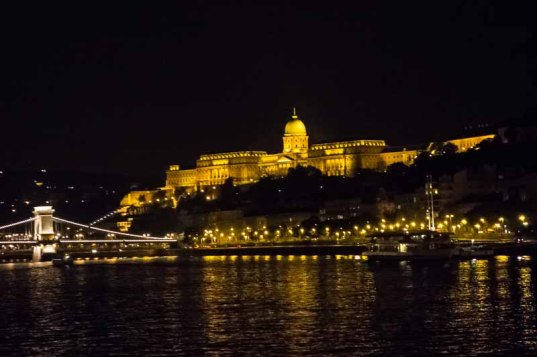 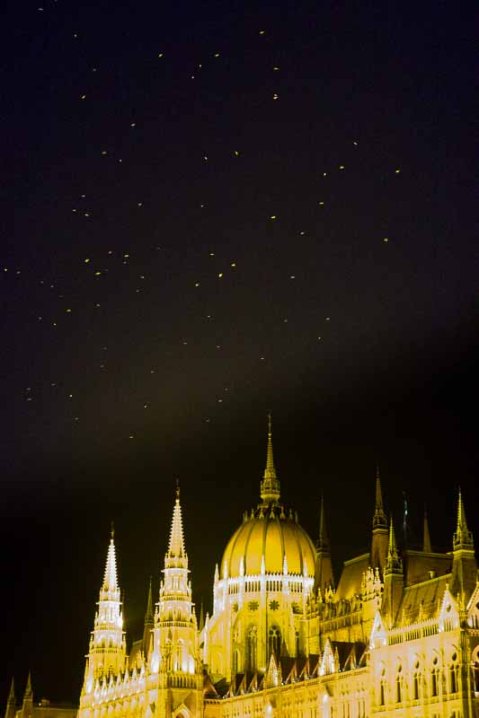 Hundreds of birds wheeling in the lights. 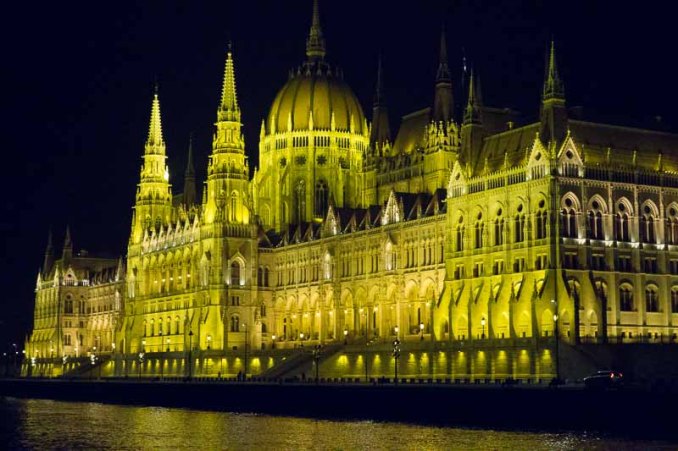 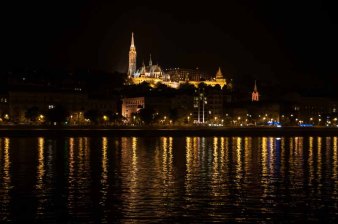 Castle on the hill 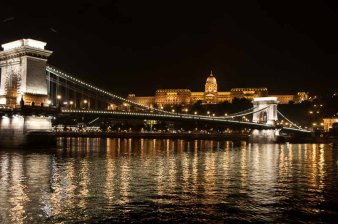 In the morning, the obligatory tour of the city, but they’re all starting to blend together.  I was impressed my Matthias Church, which has been both Catholic church and Moslem temple.  The interior is painted in an Arabic motif, with no representational art. The stained glass is from the Christian era, and the opposition is interesting. 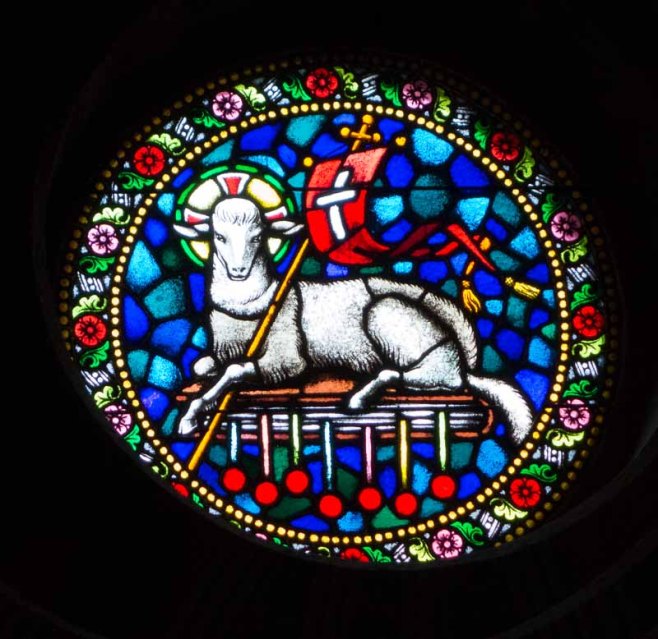 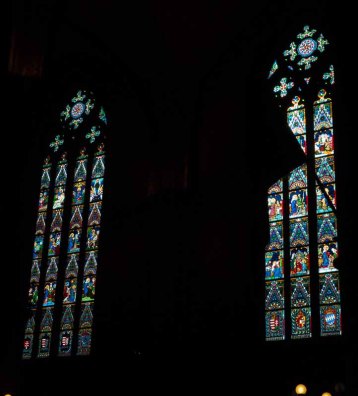 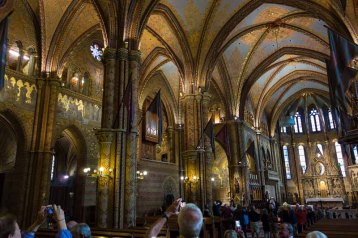 The roof of this church is like the cathedral in Vienna: 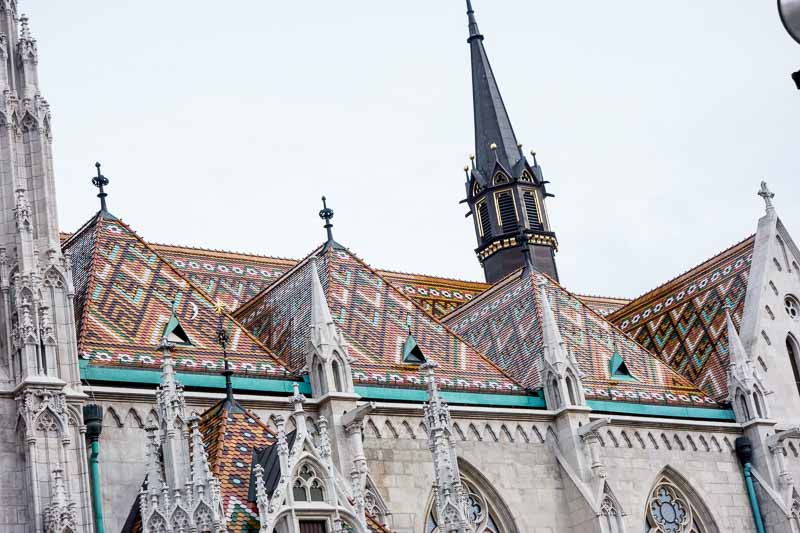 In the afternoon we took an optional excursion to what was billed as a Hungarian Cowboy show.  There are a pair of very rich brothers who compete in coach driving–either two or four horses, obstacle courses, races, dressage, this is the big leagues of a rich man’s sport.  They cover some of their costs with this show at their gorgeous facility about 40 miles from the city.

When we got there we were offered a shot of some kind of liquor, which I found so undrinkable I reflexively spat it out.  Not polite, but fitting.

Then we saw the horse show–the early Hungarians were horsemen and fierce fighters.  There was a guy shooting arrows at a target while at full gallop, then throwing a spear.  A fellow with four ponies hitched up to a cart,  One man who is handling 5 galloping horses while standing on the backs of 2 of them.  A stunningly beautiful woman in a red silk gown riding dressage sidesaddle (this last in honor of a Princess Elizabeth who lived to ride).  A bunch of guys cracking whips annoyingly, but who had beautifully trained horses.  It wasn’t exactly Buffalo Bill Cody, but it was an interesting show. 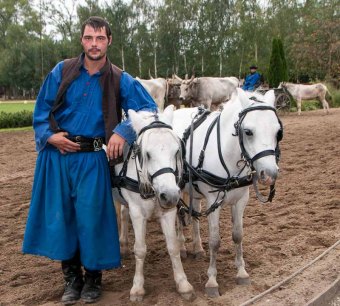 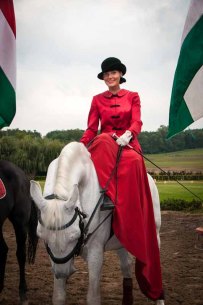 So beautiful she could be in Vogue 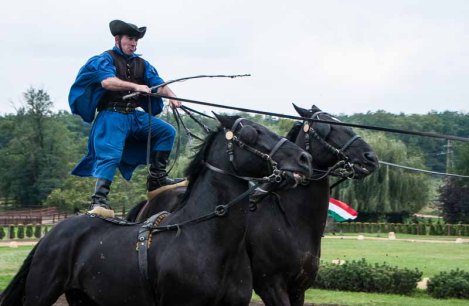 There were a few animals to look at.  Gail liked the pigs, I liked the goats.  That may define our relationship. 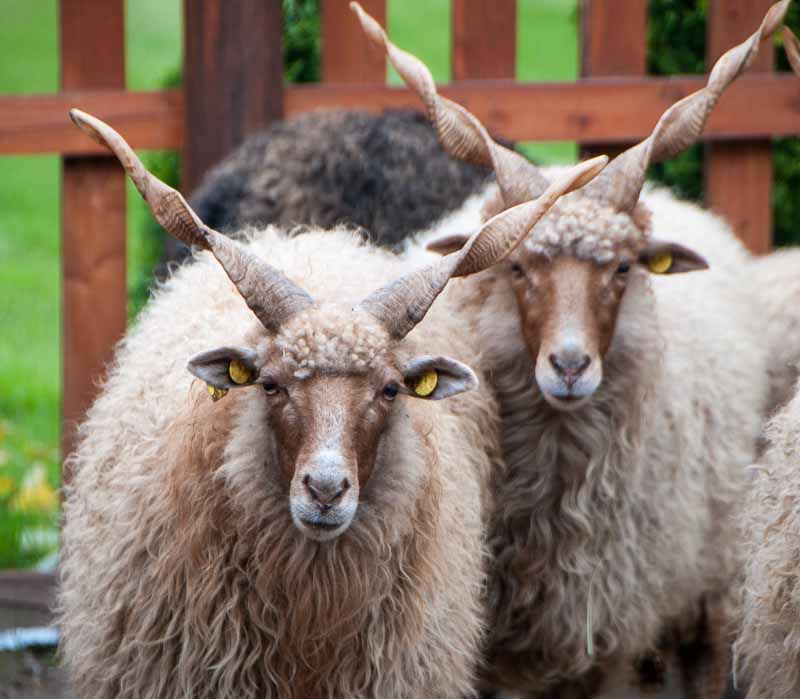 And that was really the end of the cruise.  One more dinner onboard, goodbyes to new friends we’ll never see again, and so to bed.  Jack and Carol had an early flight and had to leave the ship at 3:30 am.

We had another day until our ill-fated trip home.  I hired a car and drive to take us around for a half day to see some more of the sights.  We always like to just drive around where the rich people live and look at the nice houses.  We got a driver who had too much coffee and was talking a mile a minute in an extraordinarily loud voice in a small Mercedes.  After the second time I told her to stop shouting things got better and we enjoyed our time with her.

Beth, the Travel Goddess, had arranged a room for us at Le Meridien Hotel.  We dropped the luggage off and then our driver took us to the Museum of Modern Art on Hero Square before saying goodbye.  Which was a nice idea, but the museum is in the middle of an exhibition change and is closed except for one single piece of conceptual art.  At least it was free.

So we walked across the square to the Museum of Fine Art. The have lots of classical art, which doesn’t greatly interest us, but there is a sculpture room on the second floor we thought we’d check out, and some 20th century art in the basement. 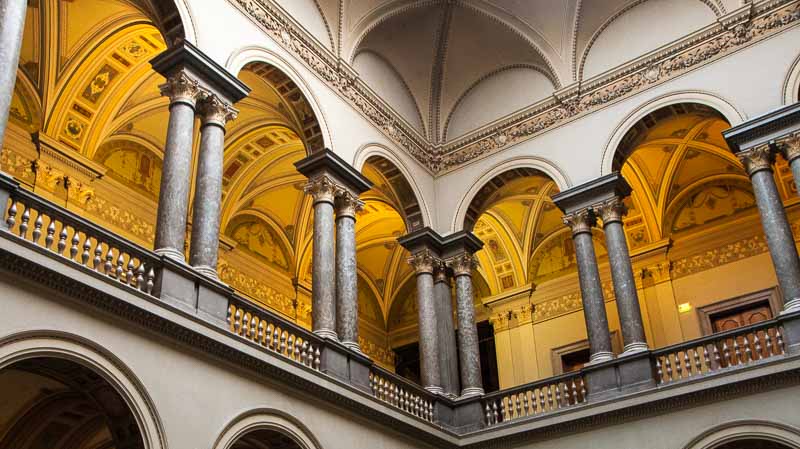 The building had some interesting features.

We took the audio guides, as always.  Then wandered through the ground floor to the rear, where there was an elevator.  That turned out to be a tiny affair, and although it was just a normal elevator, you had to go with a staff person to push the buttons.  This museum has lots of staff people doing nothing.

My audio guide didn’t work.  I wasn’t surprised.  The sculpture was all medieval and religious.

Went back down stairs (same elevator operator).  Traded my guide in for a new one.  Took a different elevator down to the basement (no operator).  Watched a fascinating video about the installation of a Toulouse-Lautrec exhibit–it was an ad for a new Samsung 4K television, but the most interesting thing in the joint.

The twentieth century art exhibit was very strange–nobody you would recognize, all eastern European knockoffs of western modern art.

A taxi brought us back to the Meridien, and the adventure got much more interesting. 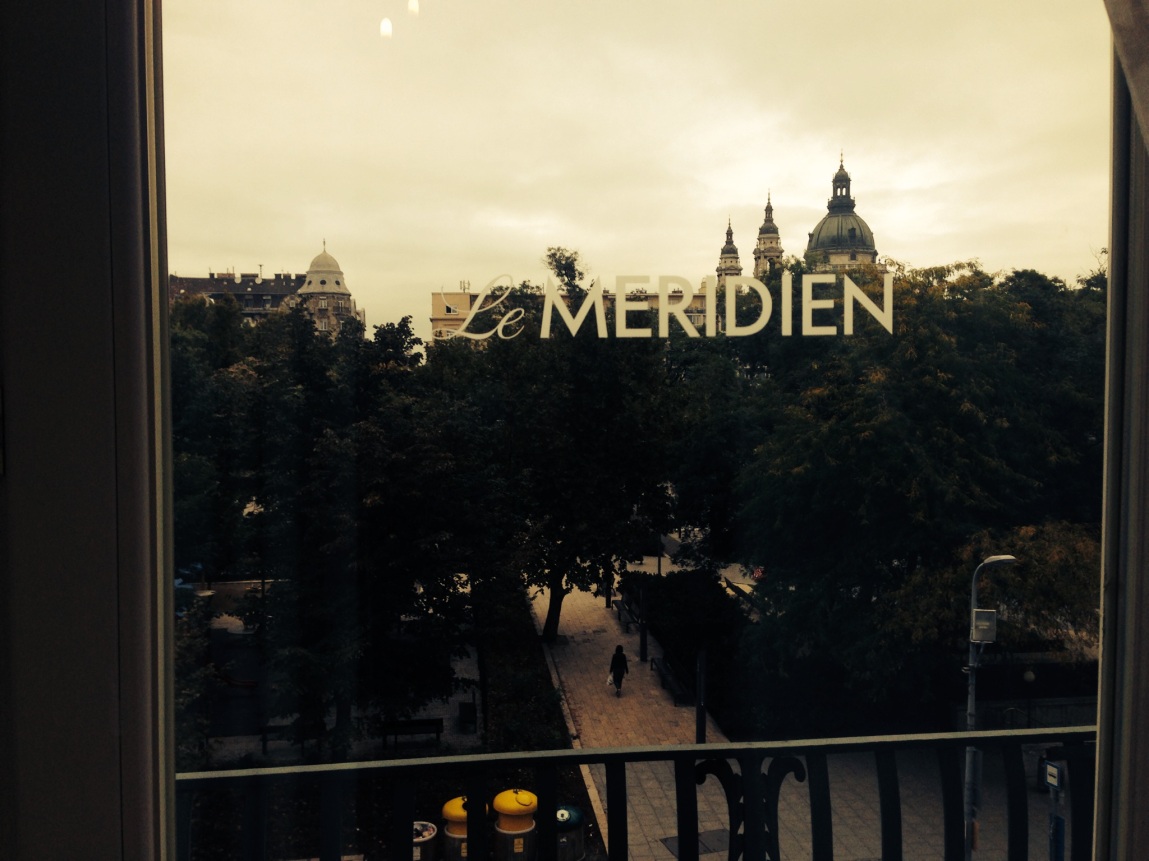 The view from our window. Photo by Gail

I don’t know who Beth, the Travel Goddess, had to kill or sleep with to arrange this hotel stay, but it was worth it.  The upgraded us to a junior suite, which was the size of a small battleship.  The bathroom, with both tub and separate shower, was larger than many of the cabins on the cruise ship.  Internet included.  In the morning I called for a pot of coffee (those foreign coffeemakers are too confusing to operate) and they brought a huge, hot pot in 5 minutes, no charge.  Breakfast buffet included. Complimentary bottle of wine.  €85 credit in the restaurant or room service.  Starwoods points for all of it.  Cool enough hotel that it was often crawling with security for the political big shots staying there before speaking at Parliament.

Lunching in the hotel,  Gail had perhaps the best hamburger I’ve ever tasted.  Room service for dinner, excellent.  Breakfast buffet was a disaster–eggs benedict ice cold, tepid tea, poor service.  Two out of three ain’t bad, and I politely let them know about the third.

Our entire trip was great.  Viking Cruises are an expert operation running as smoothly as Disneyland.  We saw wonderful places and had guides that made it all accessible.  I couldn’t recommend it any more highly.