Another beautiful day in paradise.  The weatherman calls this “instability”, with sun and showers alternating all day.  I call it great.

Micky and Linda left for home this morning so they can go to the Niners game tomorrow.  The remaining 4 of us decided to go sightseeing rather than play cards, got in motion very slowly and drove up the road to the Santa Ynez valley because we had never been there.

First stop, lunch. Gail proved her mettle yet again as ace restaurant Googler, directing us to Trattoria Grappolo in Santa Ynez.  This is reputed to be the best restaurant in the valley, and i won’t argue a bit. 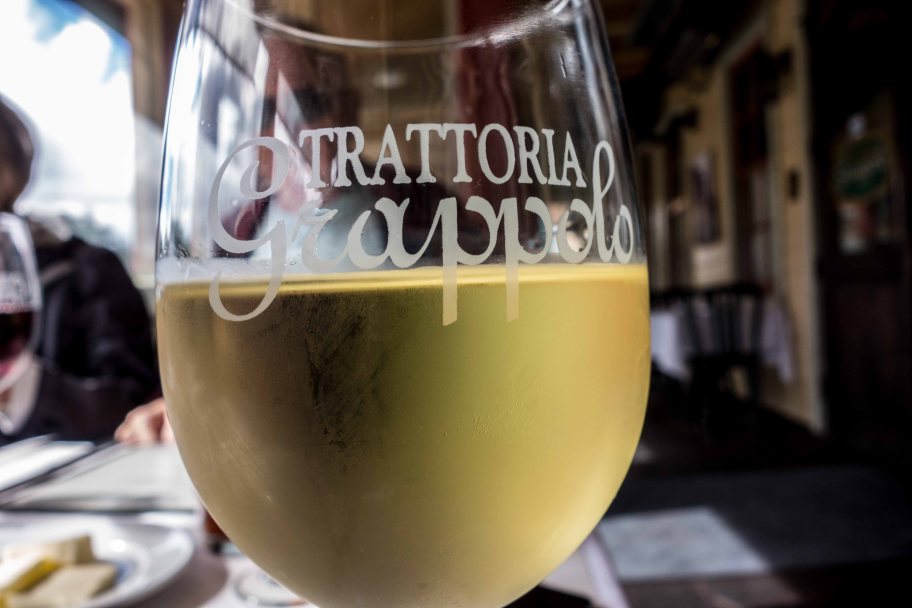 The wine was good, too.

This is an old-time Italian restaurant: it has been there for 70 years,  I can hardly imagine how remote this valley was in 1944, or what would possess anyone to start a business there. 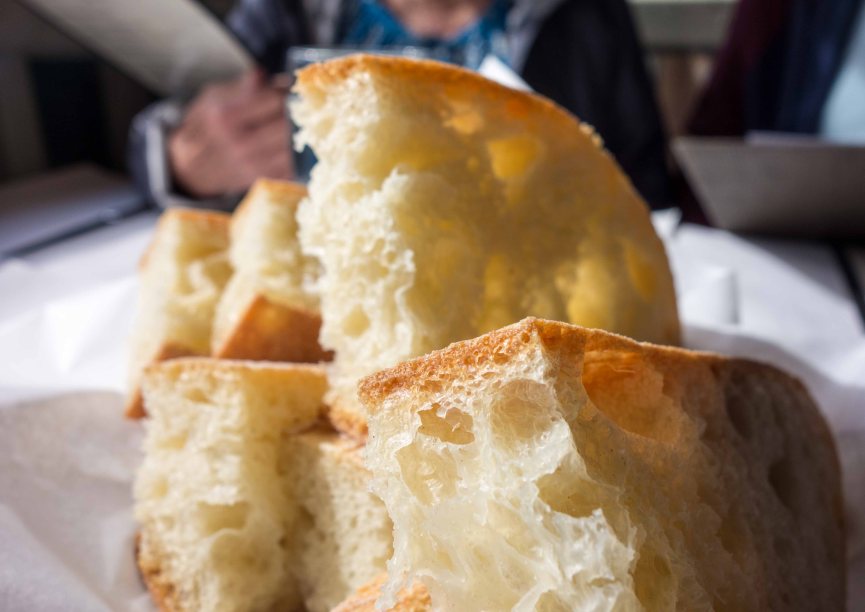 Even the bread was great

We ate in the loggia in front, with the large windows wide open even during the brief rainshower.  The meal was pretty classic Italian, with a small California accent.

Ed and Sheryl started with the caprese salad: 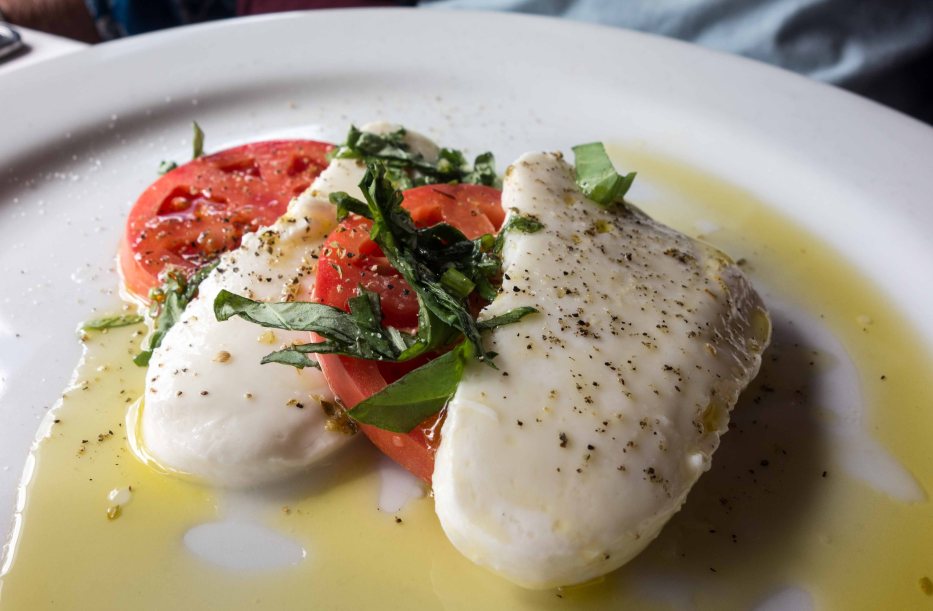 Sheryl had one of the oddest dishes I’ve ever seen, yet she raved about how good it was and took home the leftovers.  They call it Italian enchiladas—angel hair pasta in a marinara sauce wrapped in slices of eggplant.  It certainly makes an interesting and extravagant presentation: 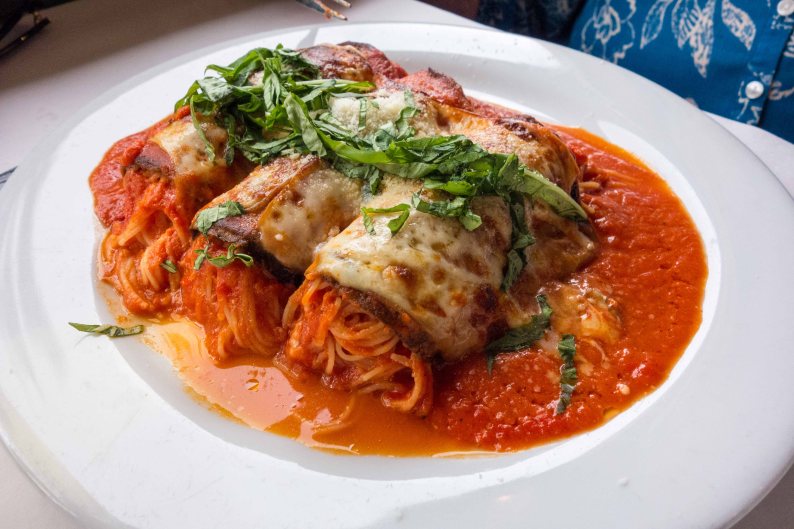 Gail went for the veal.  Ed thought it was “too busy”, and it turned out he was right. 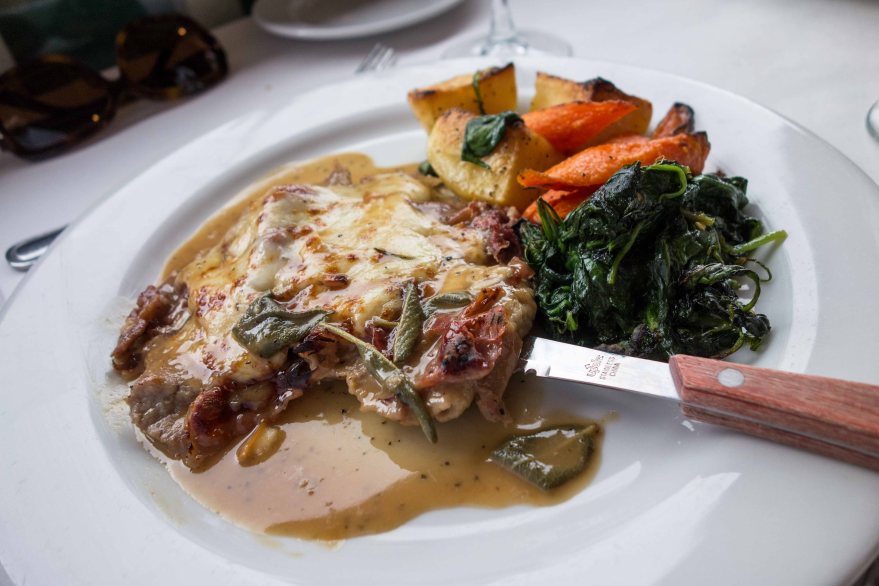 The veggies were great, the veal was breaded, cheesed, sauced and just generally overworked.

My lunch, which I was too busy to photograph, was a pasta carbonara. Spaghetti with cream, cheese, garlic, egg and pancetta. It was awfully rich, but that didn’t stop me from eating it all.

Service was good, food was good, prices were not cheap, We would all go back.

After lunch, we made an adventure and went exploring to find Neverland Ranch, the home of Michael Jackson.  Some people revere him.  I don’t.  But his house is pretty famous all by itself, so we wanted to see it.  Or at least the gate, because the house is well back in the 3000 acre ranch and can’t possibly be seen from the road. 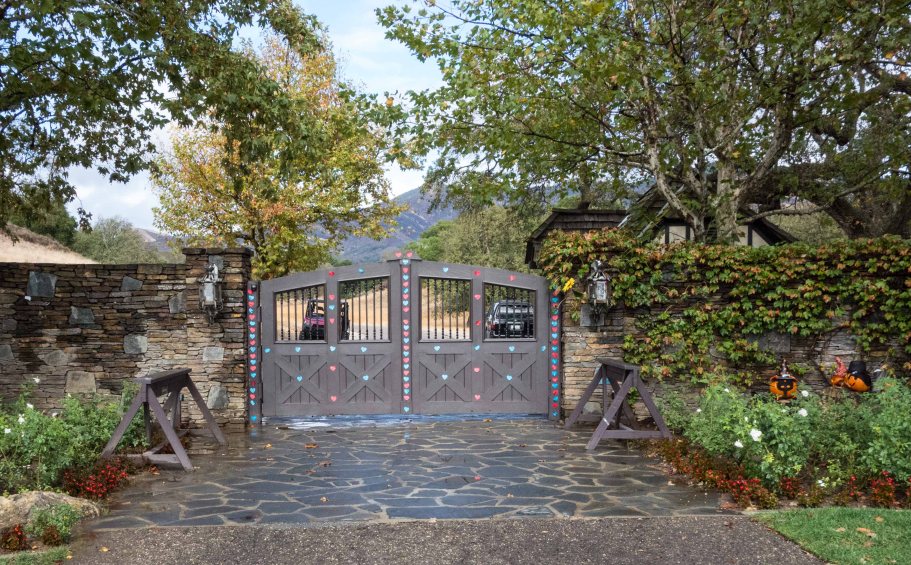 The gates to Neverland.

At one time there was a sign that said “Neverland”, but no more.  The entry is 5 miles down a country lane, but it is clear that many a fan has made the pilgrimage.  Those red and blue hearts on the gates are, I think, placed there by the caretakers so fans can leave love notes to their departed idol. I suspect that they are changed daily. 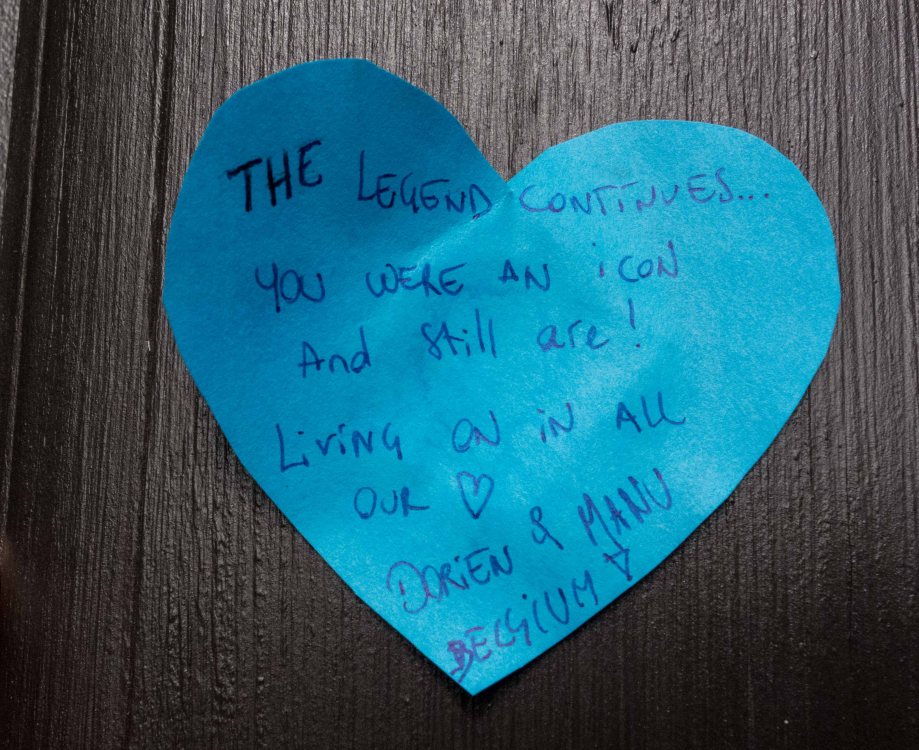 Fans come from all over the world to pay their respects.

There are also many inscriptions on the wood, on the bricks, on the lanterns, all pledging eternal love to Michael.

Because yesterday was Halloween, there was a pumpkin display: 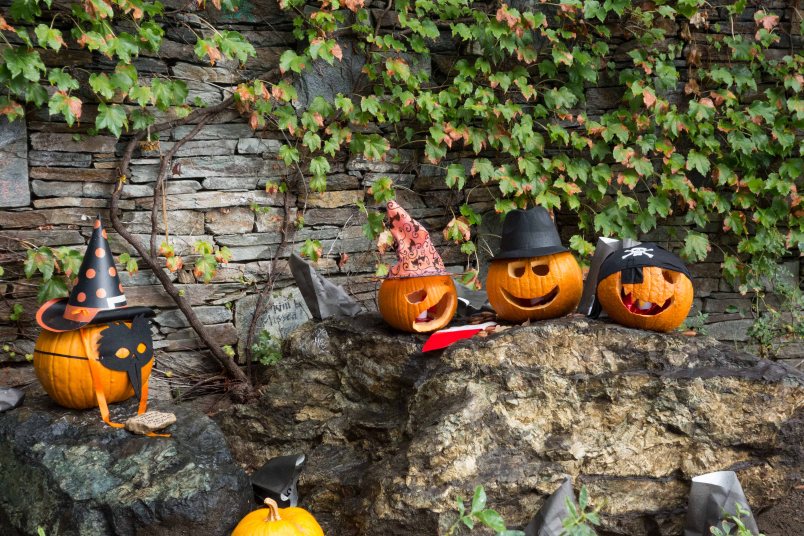 I think the second from the right is Michael.

Notice the red card in the middle–somebody thought it was not tidy enough. 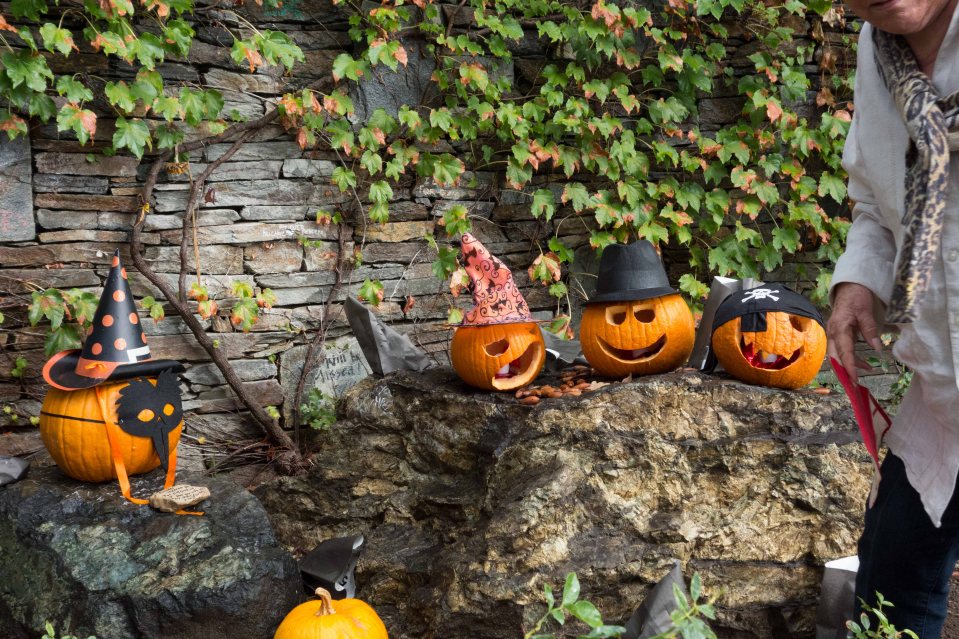 The card turned out to be a very nicely done paean of love to Michael by a foreign fan. 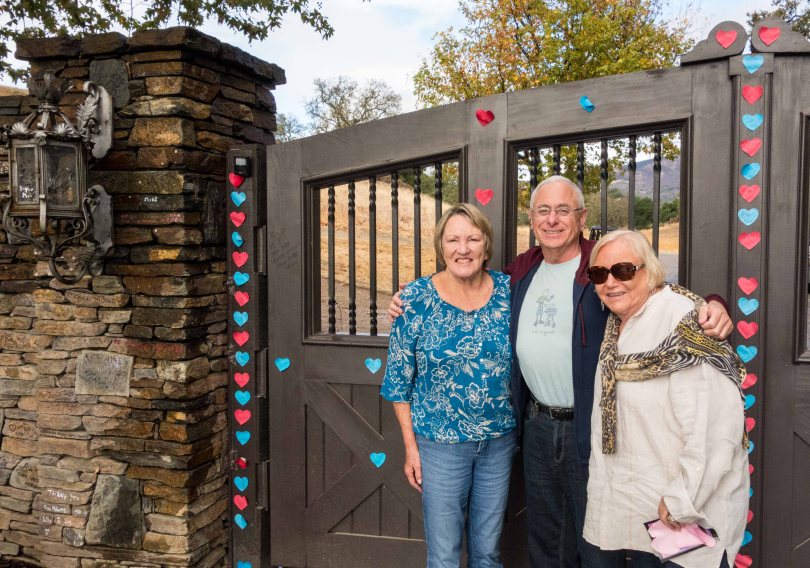 Ed wanted proof that he was there

As we left a car was waiting for our parking spot.  Two fans from Orange County had driven up.  I suspect that the flow of idol worshippers is steady and unending.

We drove home the long way, through Solvang and Lompoc.  Solvang is a tourist town with a Danish heritage, and they play that up for all it’s worth.  Danish signs, names, stores and events everywhere.  Ed, therefore, thought it mandatory to stop for a Danish. 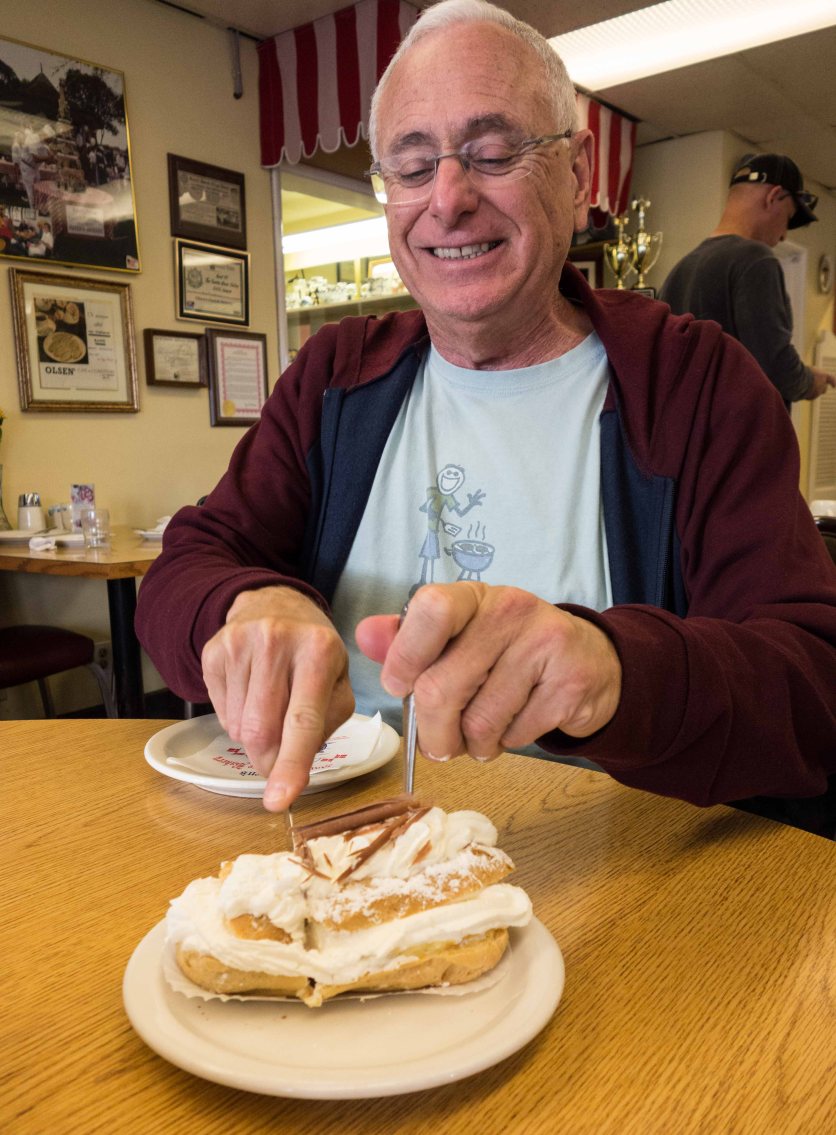 Now we’re back at the house, Ed and Sheryl are in the hot tub and I’m getting ready for a nap.  Big dinner plans tonight, I need to keep up my strength.

One thought on “Neverland, never more”