I admit it.  I’m spoiled as hell when it comes to fine dining.  We have the enormous good fortune to live here in the heart of foodie country, and are surrounded by excellent establishments on the cutting edge of the industry.

Maybe my experience is therefore atypical, but it’s the only experience I have.  And that experience leads me to think that we ate at one of the most overrated restaurants in the country last Tuesday, Bern’s Steakhouse in Tampa Florida.

We first heard about this place from a fellow passenger on the Danube in October, who thought it was one of the great restaurants in the country. .  Since we were going to Orlando, we decided to invite friends we know in Tampa and make a party out of it.

Berns has been a fixture in central Tampa for over 50 years, starting out as a tiny coffee shop and expanding to a 350 seat emporium. They don’t use opentable.com; you can send them an email but you don’t have a reservation until you talk to them personally. I jumped through the requisite hoops and scored a table for 6 people at 6:30 for what promised to be a culinary experience.

The website makes it clear that no jeans, shorts, tee shirts or flip flops allowed, so I was dressed decently. The valet took the car, and we entered a lobby decorated in early New Orleans whorehouse, red lights and all.

We were absurdly early, so we took a seat in the bar and ordered drinks.  Karl had a Bombay martini, but didn’t feel the need to get his vermouth in the offered eyedropper.

After dawdling a bit, we asked for the kitchen tour–another part of the service and mystique of Bern’s.  We filed into the kitchen and waited for a trainee waiter to lead us through the facility, which is enormous.  6200 square feet of kitchen, where from 60 to 80 employees are required to turn out the 500 to 800 dinners they serve nightly.  Two women making salads by the score, each with one olive, half a hard boiled egg, a pinch of carrot, two slices of cucumber.  One man whose sole job is peeling and slicing onions for the onion strings that adorn every entrée.  A pair of guys who cut each steak individually.  It’s an amazing operation, but the good part was about to come. 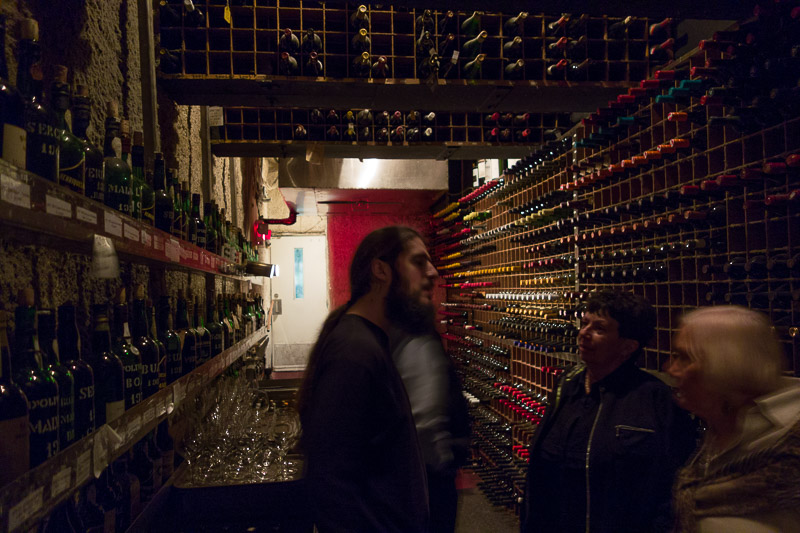 Just a tiny entryway. With our guide and SR. Very old ports and madeiras on the left.

I’m not a wine lover, and I still think this place is stunning.  Rack and racks of wine in an apparently endless array.  Young wines, old wines, ancient wines.  A king’s ransom in fine grape juice, loving and expertly tended by a crew of ardent oenophiles.

What we saw was only a small portion–there is an entire large building across the street with the bulk of the collection.  A building with no windows and 9 large air conditioning units on the roof. Tourists don’t get into that building.

Tours over, our friends Phil and Muriel Altus showed up right on time and we went in to dinner.  The hostess tried to give us a rectangular table for six, but I’m wise to that and insisted on a round one so we could all converse together.  There are 8 or 9 dining rooms, with varying status levels.  They don’t know us, so I assume we were sitting with the hoi polloi.  The room was nicely decorated, quiet and comfortable, the table linen clean and crisp and the silverware heavy.  ‘We were prepared for a memorable meal.

First, though, the drinks waiter from the bar chased me down to pay the bar tab.  I had given him my name and asked that the tab be transferred to the meal, but that isn’t the way they do things at Bern’s, he had to be paid NOW.

Our waiter arrived and the meal began.  The waitstaff at Bern’s doesn’t turn over–our waiter’s silver tie indicated that he had worked there at least 20 years. He was professionalism personified, and made the meal flow expertly.  We had all studied the 16 page menu online, so we knew what we wanted. Phil and Muriel have eaten here twice a year for the last 40 years, they know what to expect.

Bern’s dry ages all their own beef, and cuts each steak to order.  You order the exact weight and thickness you want, specifying precisely how you want it cooked.  I suppose you can order some fish, but this is a place for beef lovers.

Before the beef comes the appetizers.  I gleefully ordered the torchon of foie gras, which is now illegal in California. 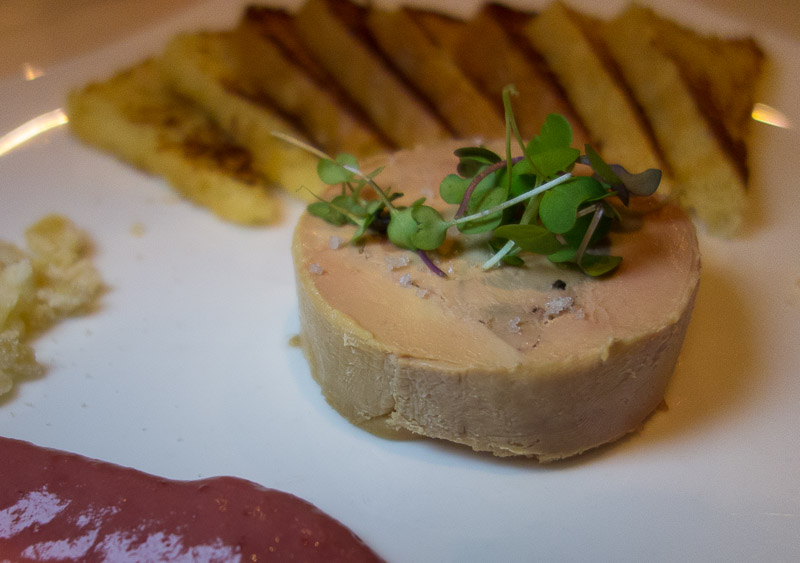 I wasn’t crazy about the rhubarb strawberry compote, but everything else on the plate was wonderful as I got to enjoy an old favorite the tree huggers have managed to outlaw in the Golden State.

Gail and Susan shared the escargot, which was served with some sort of green sauce, not the usual garlic butter, so I wasn’t busy dipping my bread.  Their plate went back clean, so the sauce must have been good.

Dinners here come with soup and salad–if you want the onion soup and the house salad.  Other choices cost more, but I couldn’t resist the vichyssoise, garnished with black truffle and caviar.  It was completely spectacular, redolent of the truffle, rich, slightly tangy, altogether one of the best soups I’ve ever enjoyed.

Gail had the Caesar salad, prepared tableside in the classic fashion:

Our waiter assiduously rubbing the bowl with garlic.

And that’s where the brakes came on.  My house salad was one of the ones we saw being made on the assembly line.  Plain iceberg lettuce, a carefully designed assortment of other items, this was a salad just slightly better than I would expect from Denny’s.

About this time the waiter plunked down a plate of “bread” for the table.  Small squares of organic matter toasted hard, some with garlic, some without.  Tasteless, brittle and unpleasant.  I know that Acme bread doesn’t deliver in Tampa, but there must be something better than this available.  Poppin’ Fresh biscuits would be a huge improvement.

Finally, my steak.  It was good, it just wasn’t great.  I ordered the Delmonico, which is the East Coast way of saying ribeye, choosing the 12 oz serving, medium rare.  I got an excellent steak, accompanied by a pile of over seasoned, limp, onion strings, some carrots and string beans.  A baked potato was proffered with all the traditional fixings.  This was a fine meal for any roadside steakhouse in the midwest, it just wasn’t the spectacular feast we had been promised.

Phil and Muriel had a filet mignon, which was a truly special piece of meat, tender as butter and perfectly cooked.  The same onion strings and mediocre veggies.

Once the main courses were consumed, the meal is over at Bern’s–no dessert here.  You get your check, with a 12% “service fee” attached–the menu says it all goes to the waiter in lieu of a salary.  You are encouraged to add an additional tip to the substantial bill.

For the finale to the experience, your party is led upstairs to the dessert room, which consists of 48 small rooms created from old wine vats, each holding a single table to provide a romantic atmosphere for the coda to the meal.

The dessert menu is extensive, and includes a large cheese section on can enjoy with the incredible variety of wines available.  I settled on the banana split:

Peach, strawberry and chocolate malted ice cream and 3 cherries. Heaven on a plate

Finally, after about 3 hours, I whipped out the credit card for the third time for one meal and we were on our way home.

Bern’s is a very good restaurant, with excellent service and a wine cellar to write poetry about.  It just isn’t one of the great restaurants because the menu, systems and decor have not been updated in 40 years or more. Some things are spectacular, like the vichyssoise, the caesar salad and the escargot.  Others not so much.  The house salad was below average, the vegetables are insipid, the bread inedible.  There is no flow from the bar to the meal to the dessert, and paying three separate checks is insane.   All modern restaurants take reservations online.  The New Orleans whorehouse look went out in 1875, unless you really are a New Orleans whorehouse, in which case they need a very different staff.