It sounded like a night of fun, art and rowdiness, dinner at 1515 in Walnut Creek and then an adult painting class–which we were about to crash with a bunch of real artists.  The expedition was being led by Linda Bell, a woman who knows how to have far too much fun.  We were being joined by Ted and Mary Bayer, two of the hardest partying artist I’ve ever met. Kate and Brad. Harry Siter. BJ. A couple of other fun people. What could go wrong?

There were a bakers dozen of us, all crowded around a high table in the bar area of 1515.  The wine flowed freely, appetizers were ordered to share, a few dinner entrées were downed and the bill came.  First problem of the night.

1515 sells gift cards through Costco–$100 gift card for $75.  I bought two of them because Kate and Brad were joining us. Linda had a couple she bought through Groupon.  Since our bill was close to $500, we thought we were in good shape, but the manager of the restaurant didn’t want to accept the gift certificates.  That isn’t particularly legal, but I don’t think he cared. Eventually Linda caved and paid cash, I threw in my certificates and we headed to the back stairs for the art class–when the manager stopped Linda and told her she couldn’t go to the class (for which we had all paid in advance online) because of the gift certificates.  Arguments ensued. Insults to masculinity we proffered. Tears were shed.  Linda, who hadn’t even used her certificates, finally prevailed and joined the rest of us at the class.  We’re not feeling very good about 1515 at this point.  The night was young.

Linda early in the evening.

The painting class was in an upstairs banquet room. Three long tables were set up, with room for perhaps 40 to 50 people.  Each person had a tabletop easel and canvas, a paper plate with a full palette of colors of acrylic paint, three paintbrushes, a red plastic cup full of water and a chamois. Most of the other “students’ were earnest people in their 30’s serious about learning a bit of painting.  We were not serious about anything other than partying.

The class began.  The instructor had everyone put paint on a brush and draw a line across the top of the canvas.  Mary Bayer started an abstract painting.  Eileen, next to me, was making an impressionistic rendering of the torchiere adding light to the room.  Linda had another glass of wine.

The instructor continued, offering the most basic possible instruction, leading the class stroke by stroke in a very simplistic seascape.  Our group got rowdier by minute. 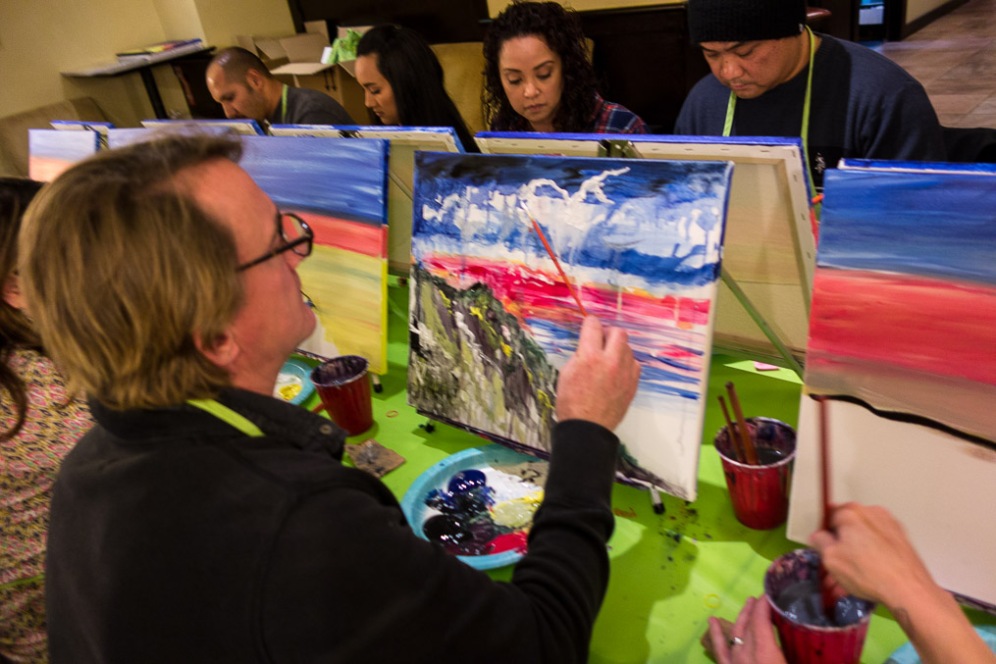 Harry was well behaved, but he doesn’t color inside the lines.

Linda and Jill acting out.

A break was called, so the paint on the canvasses could partially dry. Some people used this as an opportunity to refill their drinks.

Linda somewhat later in the evening

At this point, things went downhill rather swiftly.  Our group was, you might say, “chatty”.  The serious students were not amused.  The instructor was frustrated, and not very well trained at handling ill behaved groups, which we sadly were. There is a bar right in the classroom; it can be no surprise that people drink and some drink too much.

Finally, things came to a head.  The rowdiness reached a crescendo. The instructor completely lost it, and began a tirade which included the immortal line “shut the fuck up”.  I think there was cheering from the studious side of the room.  It was ugly.

Kate and Brad left.  Gail and I left.  Jill, and Mary and Ted, had already gone.  The fun had died.

Paint night was an amazing event.  Fun food before, marred by an insane policy and poor management.  Tremendous fun painting, then an incompetent instructor who couldn’t handle some overly rowdy people–I would certainly have understood if he had quietly thrown a couple of us out, but his foul mouthed screaming tirade was utterly unacceptable.

I don’t think we’ll be going there again. Not that they would let us in.