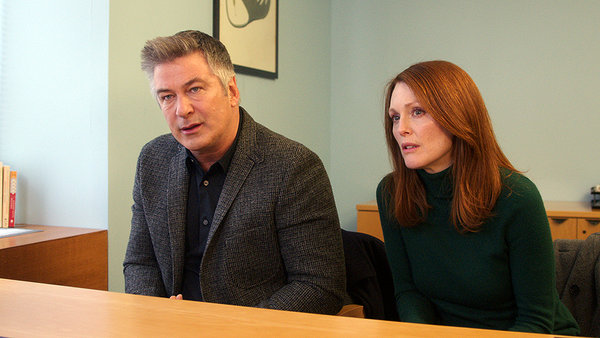 Still Alice is a good movie with a great performance. Gail read the book, by Lisa Genova, which she enjoyed but was not moved to tears. She cried at the movie. Julianne Moore is the clear front runner for this year’s Academy Award for Best Actress for her quiet, subtle performance as Alice Howland, a 50 year old super achieving professor of linguistics stricken by early onset Alzheimer’s disease.

It wouldn’t be so bad if she didn’t know it was coming, one supposes. But  momentary lapses, difficulty in reaching the perfect word, expand into greater and greater memory and cognitive losses.  The once brilliant, world renowned Columbia professor now gets lost running in her own neighborhood, eventually doesn’t recognize her own daughter.

Alice and husband John, also a professor at Columbia,  have 3 children–a doctor, a lawyer and an actress.  Alice continually pushes the actress to go to college, not seeing her daughter for who she is, being so strongly focused on academic achievement.

The progress of the disease is inexorable and swift. The eldest daughter, the lawyer, gets pregnant and over the course of the 9 months Alice goes from fairly high functioning to barely able to communicate at all, a progression Moore portrays beautifully and painfully.

The movie is somewhat trite–a logical plan to end her life on her own terms is foiled at the last second, the symbolism of the new birth contrasting with the decline of the protagonist is old and musty, the husband being forced to move on with his life in pain is hardly creative. The strong supporting cast and the phenomenal acting chops of Julianne Moore surmount the scriptural weaknesses, and make this a film you will remember for some time to come.

The speech Alice gives as perhaps her last public act is played brilliantly–it could easily have descended into mawkish pathos or risen to over-reaching heights, but director Richard Glatzer keeps just the right touch and breaks your heart in the process.

Alec Baldwin portrays the devoted, loving, caring husband without being a simp.  His own career is reaching heights he never dreamed of as his wife is rapidly slipping away, and he is hard pressed to reconcile the two issues.  He does what he must, but he doesn’t have to like it.

There is no happy ending, how could there be?  The miracle cure for Alzheimer’s has yet to be found, and Alice drifts deeper and deeper into oblivion.

Still Alice has no explosions, no car chases, no sex, no violence. The good guys lose in the end. The whole damn thing is painful. It’s hard to believe that they make movies like this anymore, movies for adults.  Don’t miss it.

One thought on “Still Alice”