Life is who you know

Dinner Monday at The Commissary, the new operation in the Presidio by noted restaurateur Traci des Jardine.  We try new places anyway, but this is special because of the general manager–Tessa Vitale.  She’s also Gail’s eldest granddaughter

The beautiful granddaughter Tessa with Gail and Susan

We were out with Susan, Kate and Joji, Susan’s nephew who is a chef at a small, hip Mexican restaurant near the Park.

The Commissary is in one of the old Presidio buildings, thoroughly modernized.  The area is beautiful, with wide sweeping lawns and too little parking.  Inside, incandescent lighting in fixtures salvaged from an old Army gym sets a mood while halogens actually light the room.  The Douglas Fir tabletops are salvaged wood, the napkins are heavily starched kitchen towels.  It wasn’t crowded on Monday night, so I don’t have much of an opinion about the noise level.

The wine glasses are quite interesting–short, flat, stemless glasses that add a distinct Iberian flair to the wine and have a much lower rate of breakage.  The wine list itself is largely Spanish, and Gail recognized precisely nothing, so she had to trust the wisdom of the sommelier, but since that was Tessa there was no worry.

The menu is Spanish, starting out with some tapas, then appetizers/starters.  I’m not sure there’s a real difference here, but it makes the chef happy.  It didn’t much matter what we ordered because the house just kept bringing out food.

You could think of this as Spanish caviar.  We all loved it, and I was particularly pleased to find the “grilled bread” was still warm and soft, not the hard, cold slabs of yesterday’s bread so often served.  The roe had a distinct pop and a salty fishiness brilliantly offset by the crème fraiche.

This was an excellent house made pork paté, firm and flavorful.

There are only 5 entrées on the menu, and we had 4 of them–nobody was interested in the NY steak.  I had the vegetarian option, trinxat. (pronounced “trinchat”).  It’s just a potato cake, served with a melangé of cabbage, green garlic and spring onions, with melted idiazabal cheese.  It ordinarily comes with King Trumpet mushrooms on the side, but I switched them out for asparagus, as anyone would.

I think there’s a perception that the vegetarian option is for teenage girls and skinny, stringy-haired tree huggers and that’s very unfair.  Sometimes it just looks like the most interesting thing on the menu, and I completely enjoyed this dish.

Kate tried the chicken.  She ate it all (except the liver mousse, which the rest of us shared) and liked it.  I don’t have a photo for some reason. Here’s an insider secret–Michael Bauer, the most influential restaurant reviewer in San Francisco, is reputedly a sucker for a great roast chicken, so restaurants concentrate on perfecting theirs to win a good review.  The Commissary knows this, so the chicken dish is excellent. That’s a tip from Joji, and Tessa did not disagree.

Gail and Susan both had the jamon wrapped trout.  Jamon is ham, and usually means a cured ham similar to Italian prosciutto. The trout was very pink, to the point it looked more like salmon.  It’s very easy to overcook fish, but the kitchen here are experts and it was delightful.  There was something in the chanterelles that Gail thought was too tart, but we couldn’t decide what. 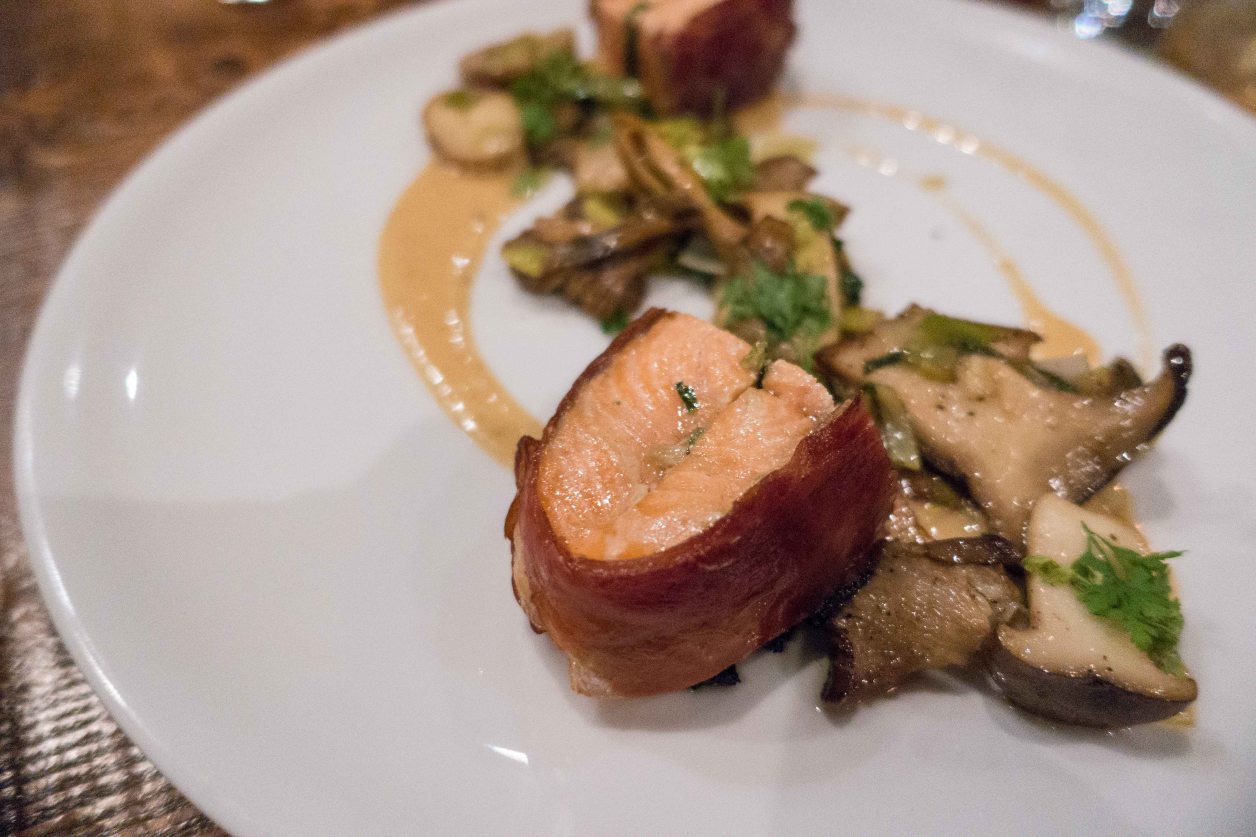 Joji had the roasted pork and found it acceptable but not remarkable. 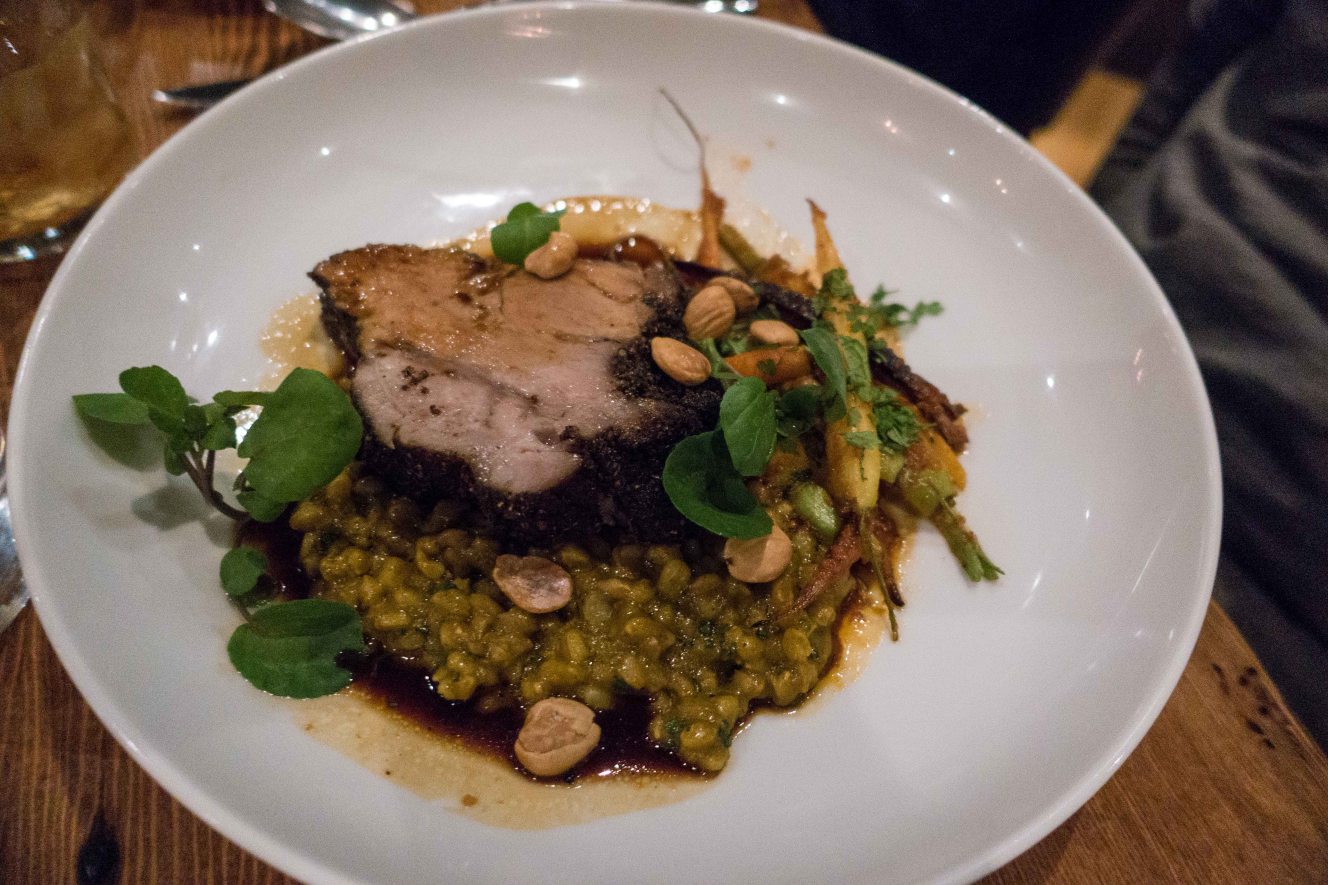 Cermoula is a North African marinade, and romesco is a Spanish nut and red pepper sauce, so the dish had lots of flavor, but the cut of meat was quite fatty.  We were all fans of the Marcona almonds on the dish.

We also had the available side dishes of grilled asparagus and fried baby artichokes.  Both were excellent, but the artichokes were spectacular and different–don’t miss them.

Courtesy of the house, we didn’t have to order dessert, as 4 of them magically appeared.

Here’s a dish I would probably not have ordered because of the rhubarb, and that would be wrong. The tangy cheesecake is set off well by the mild sweetness of the vegetable.  Just another lesson in widening your horizons.

Torrijas turns out to be French toast, served as dessert with dulce la leche (caramel) ice cream, strawberries and yet more of the lovely marcona almonds.

The lemon ricotta fritters were Gail’s pick of the desserts–and she’s not much of a dessert eater. These fried puff balls of ricotta cheese were light and elegant, the coffee cream was an excellent counterpoint.  This may be the perfect dessert for people who can imagine dessert without chocolate.  I’m not one of those people.

This is my style. A very dark chocolate cookie and a fascinating ice cream. I thought I was an expert in ice cream sandwiches, but this is just another level.  I have no idea how to create olive oil ice cream, but it’s incredible.  The cookie would be too dark and strong without the ice cream; the combination was perfect.

All in all, it was one hell of a good dinner.  Of course, everyone in the kitchen knew that Tessa’s gran was in the house, so everything was double super perfect.

Speaking of the kitchen, I was looking for the men’s room and found this: 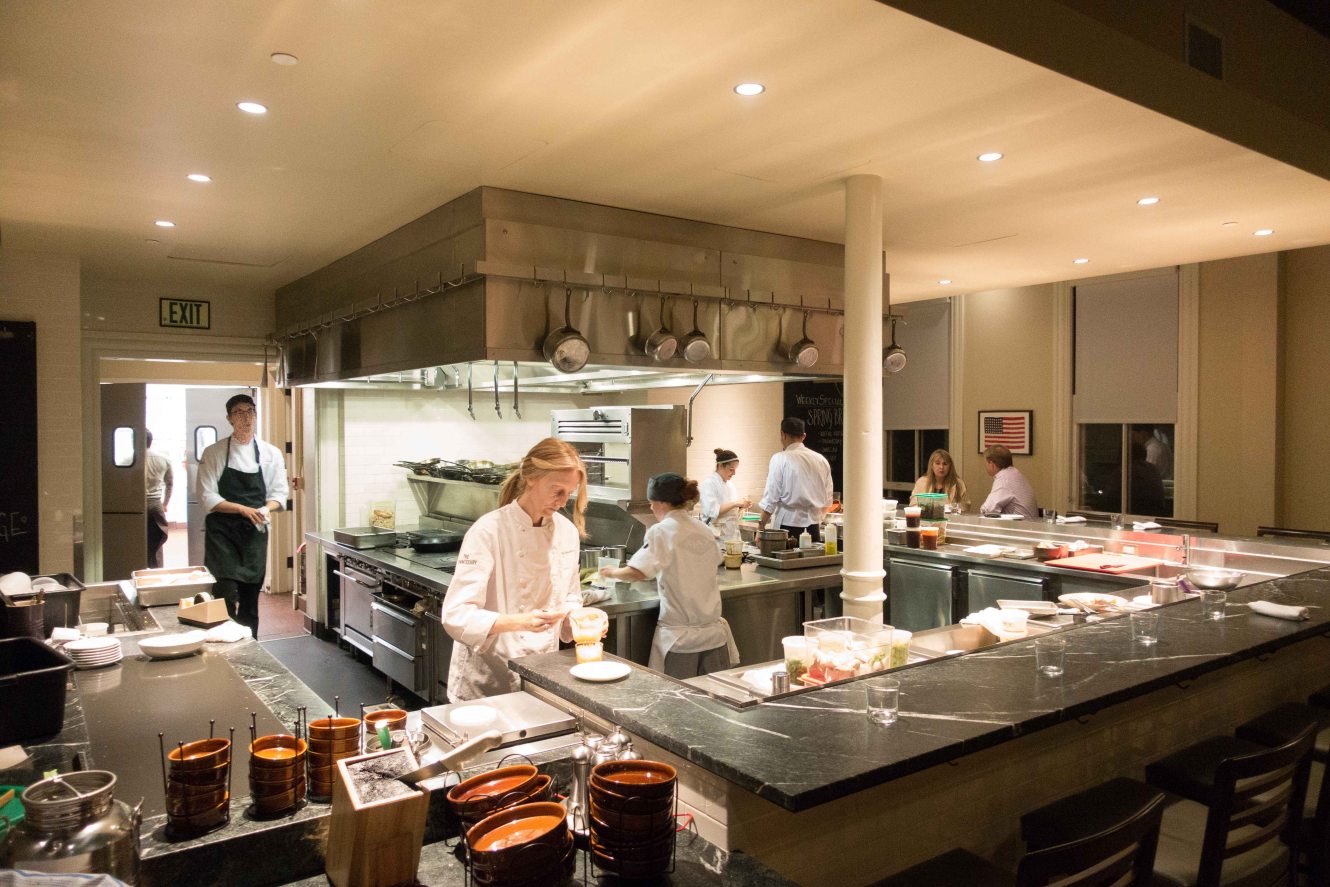 There was an entire back room I hadn’t seen, and it includes the kitchen, which is designed to be seen.  There are chairs around 2 sides, so you can sit at the counter and watch, which is exactly what Gail and I will do the next time we go.

The Commissary is a fun place to eat–the food is good and the atmosphere is warm and inviting.  Tell Tessa I sent you.

One thought on “Life is who you know”