Mike and Linda and Gail and I have visited many cities together, and one of the traditions we have developed is finding the restaurant in the tallest building, preferably one that revolves.

We have eaten high in the sky in Dallas, Seattle, Vancouver, Louisville, St. Louis,  Las Vegas,Toronto, Montreal and some others.  These places tend to be pricey because of the location, but have good food as well as the view to justify the price.

The four of us entered the Mixed Board a Match Teams on Wednesday, but failed to qualify by a mile.  We collectively had a totally hideous day, with a score we will never admit.

Thursday, therefore, we entered a new event.  We chose the Daylight Swiss teams, so we could go out for a leisurely meal.

Relying on the hotel concierge, we chose The Signature Room on the 95th, in the John Hancock Tower.  We hoped that we would get a better table if the hotel made the reservation for us–they have pull, I don’t.

The view to the south

We started to think we were in trouble when we had to line up for the elevator, next to signs indicating bags and ID’s would be checked.  The staff were brusque and unwelcoming, but didn’t find a need to check anything, although people going to the 96th floor lounge had ID’s checked to ensure they were old enough to drink.

My hope for a good table was dashed quickly.  The hostess informed us that the window tables were all taken, and we would get a “one up”, one table from the windows.  Turns out that they speak a funny kind of English, because this was our table:

Their definition of one table from the window

I pointed out that we were two tables away, and was told that’s what they call one table.  I wonder if we could have paid in corn nuts and said that what we call dollars.  I have no comprehension of how people can lie with that kind of conviction.

Still, the views were spectacular and I walked all around the floor taking pictures.  Then I did it again in 45 minutes as the sun went down, and again before we left. 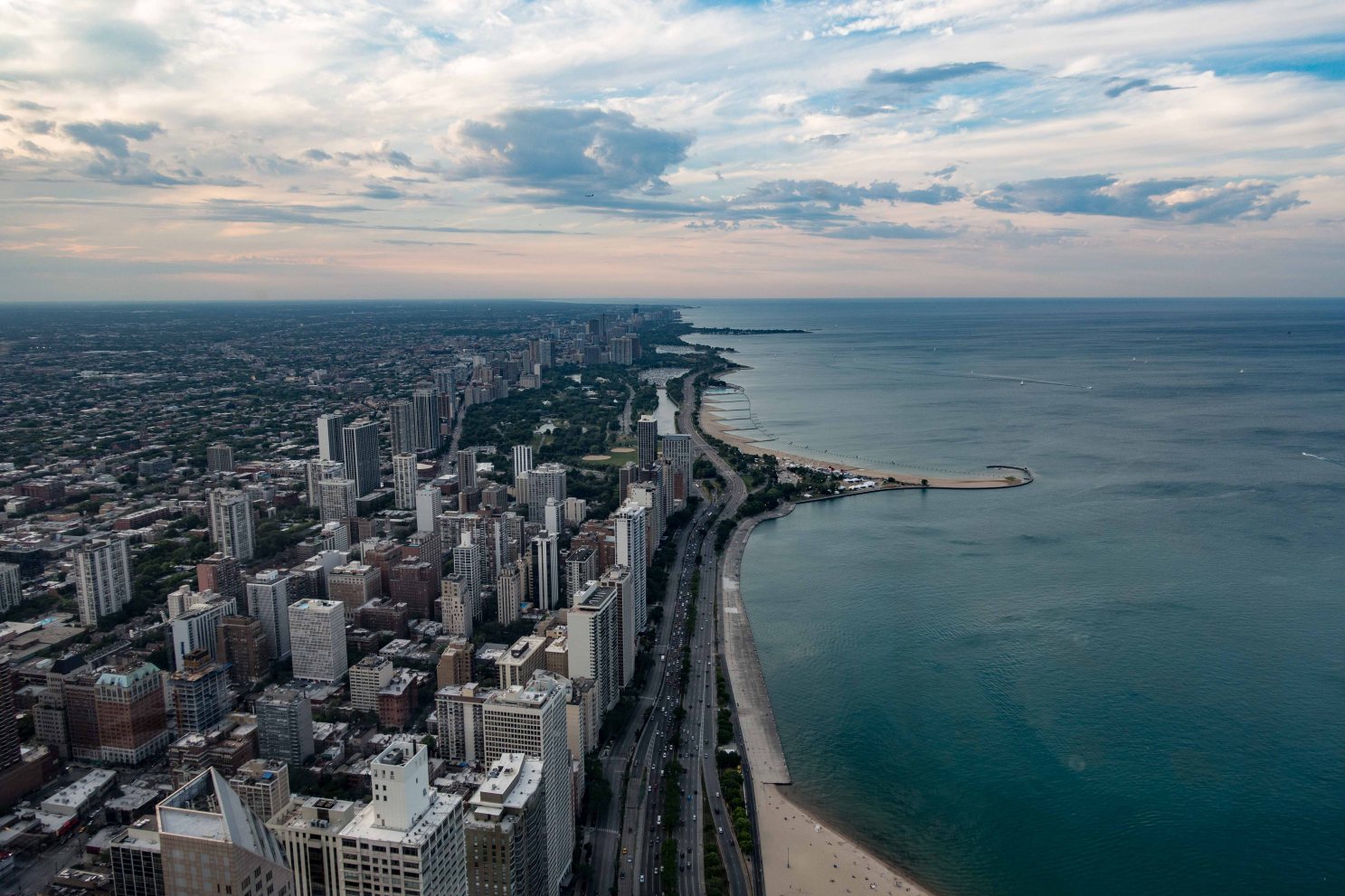 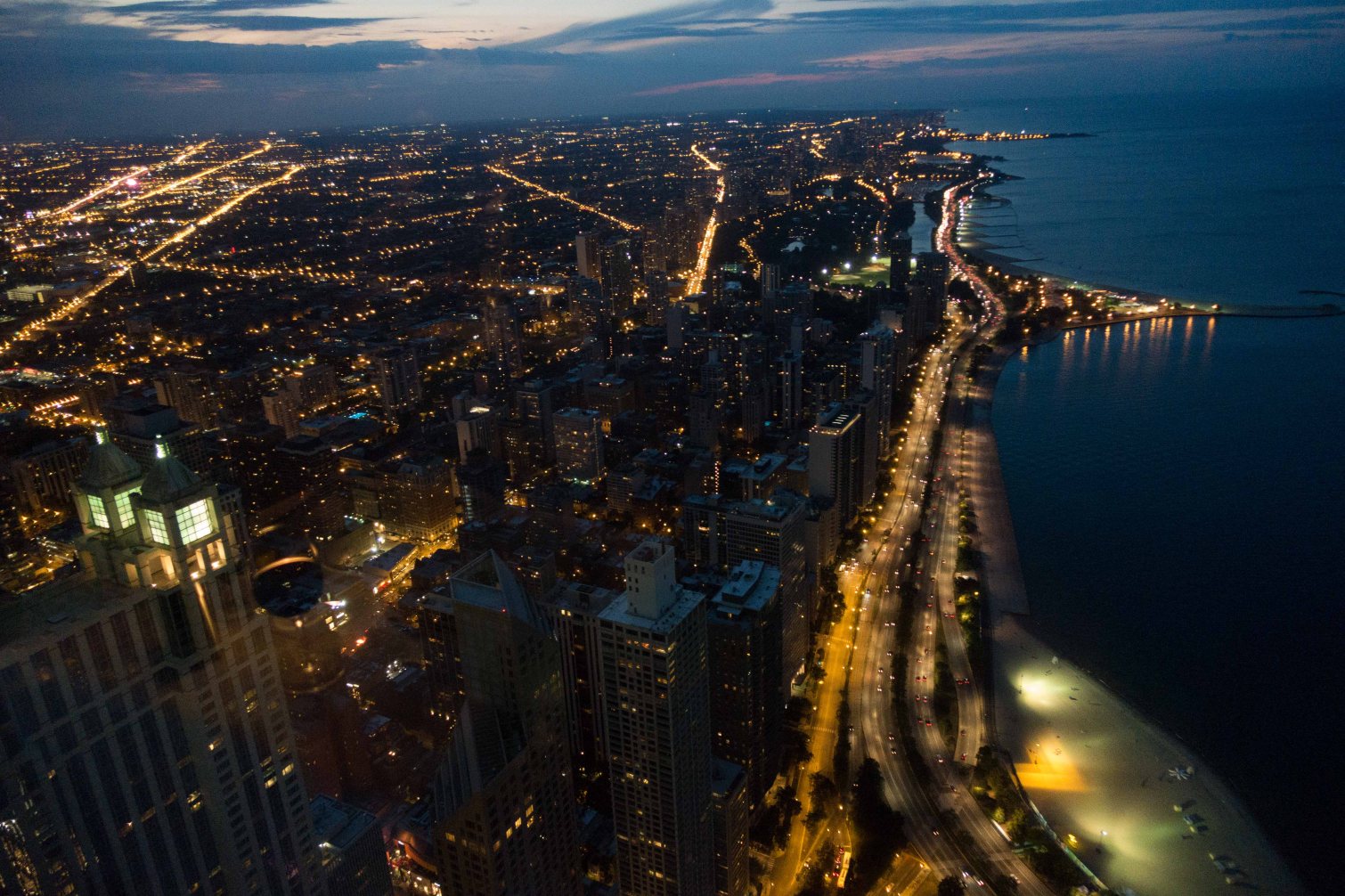 I wasn’t pleased with the management, but the dinner was certainly fine, beginning with the torchon of foie gras.

Gail had the excellent buffalo carpaccio. 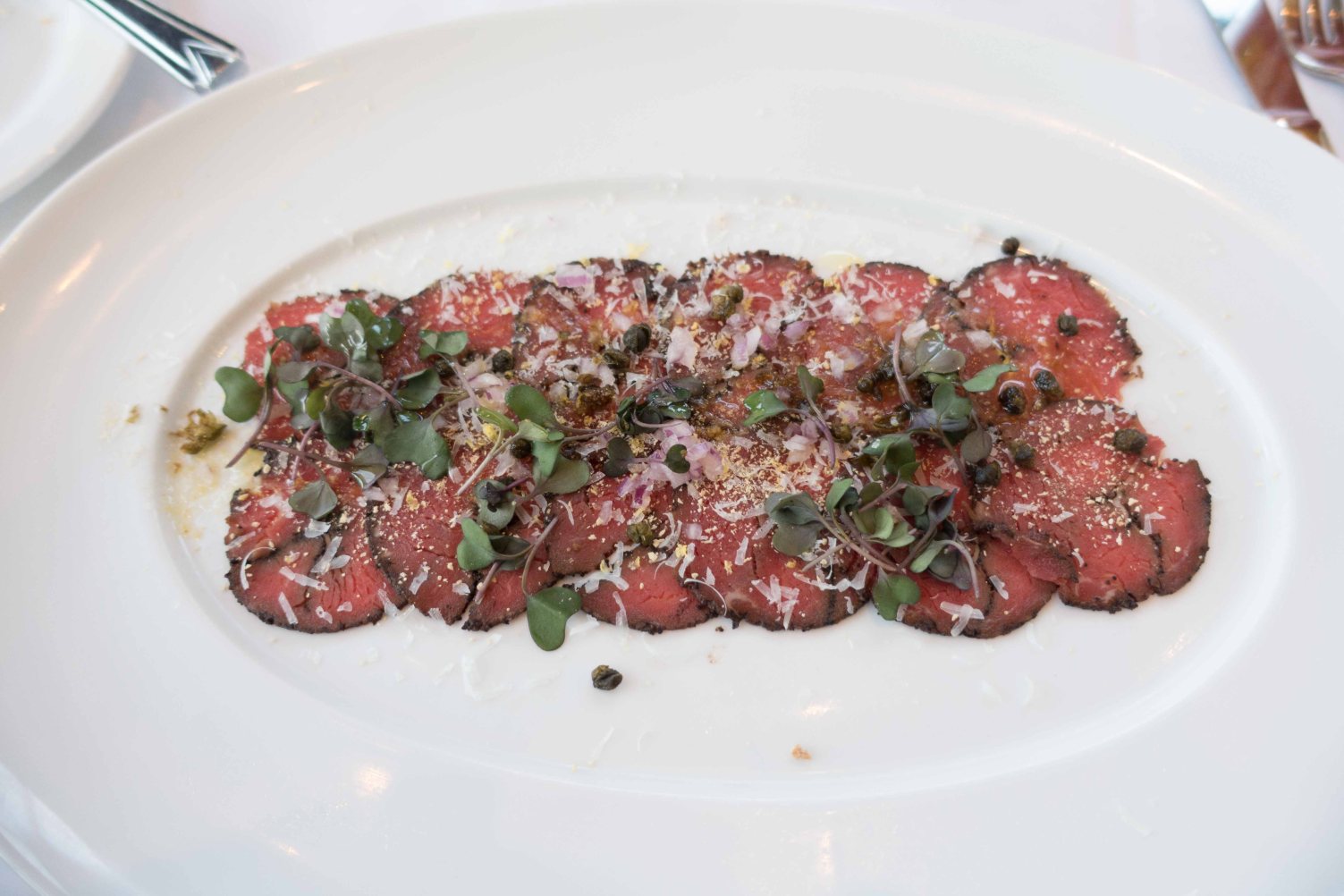 It was time for another photo: 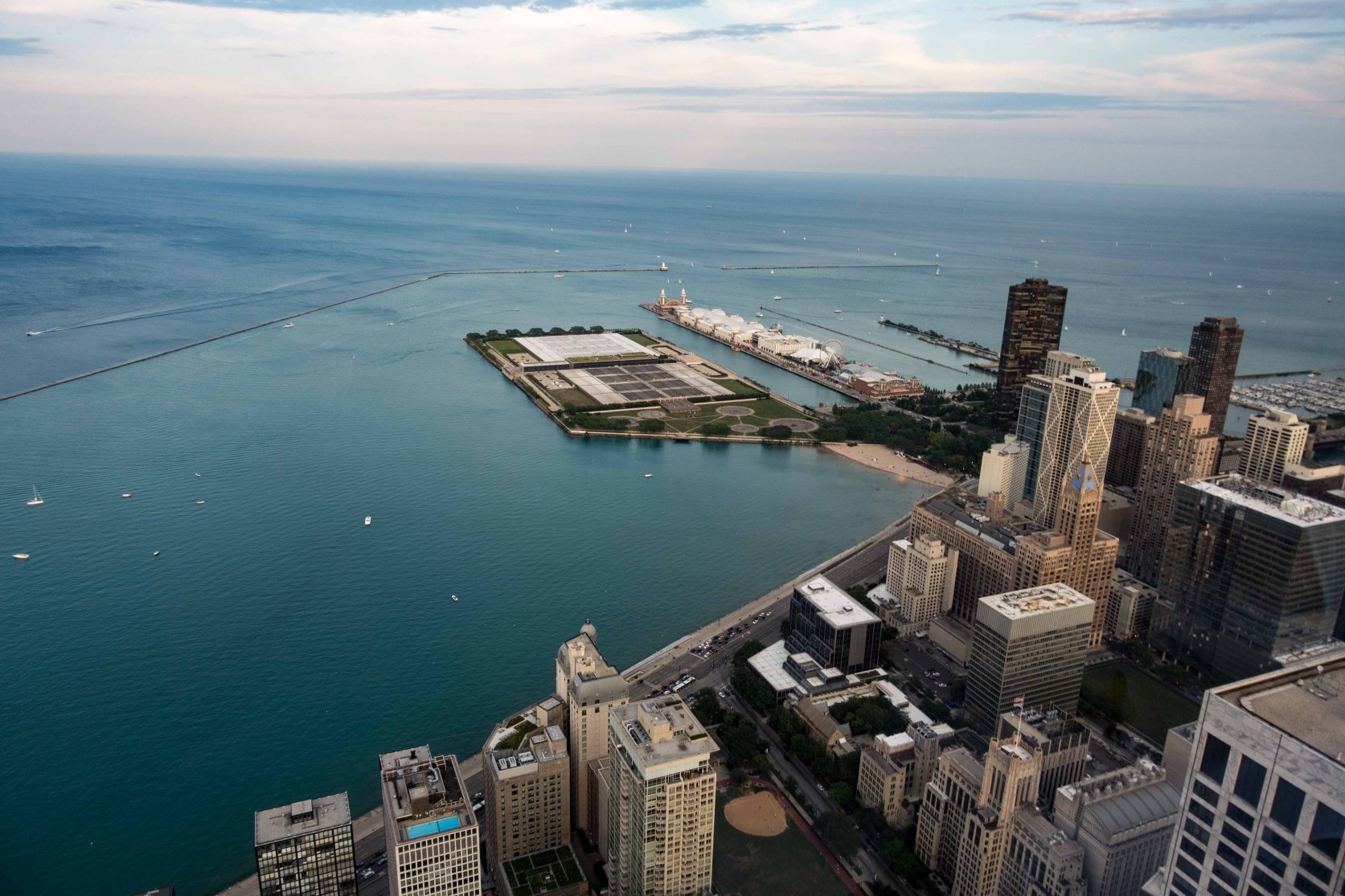 I had the duck breast entreé. 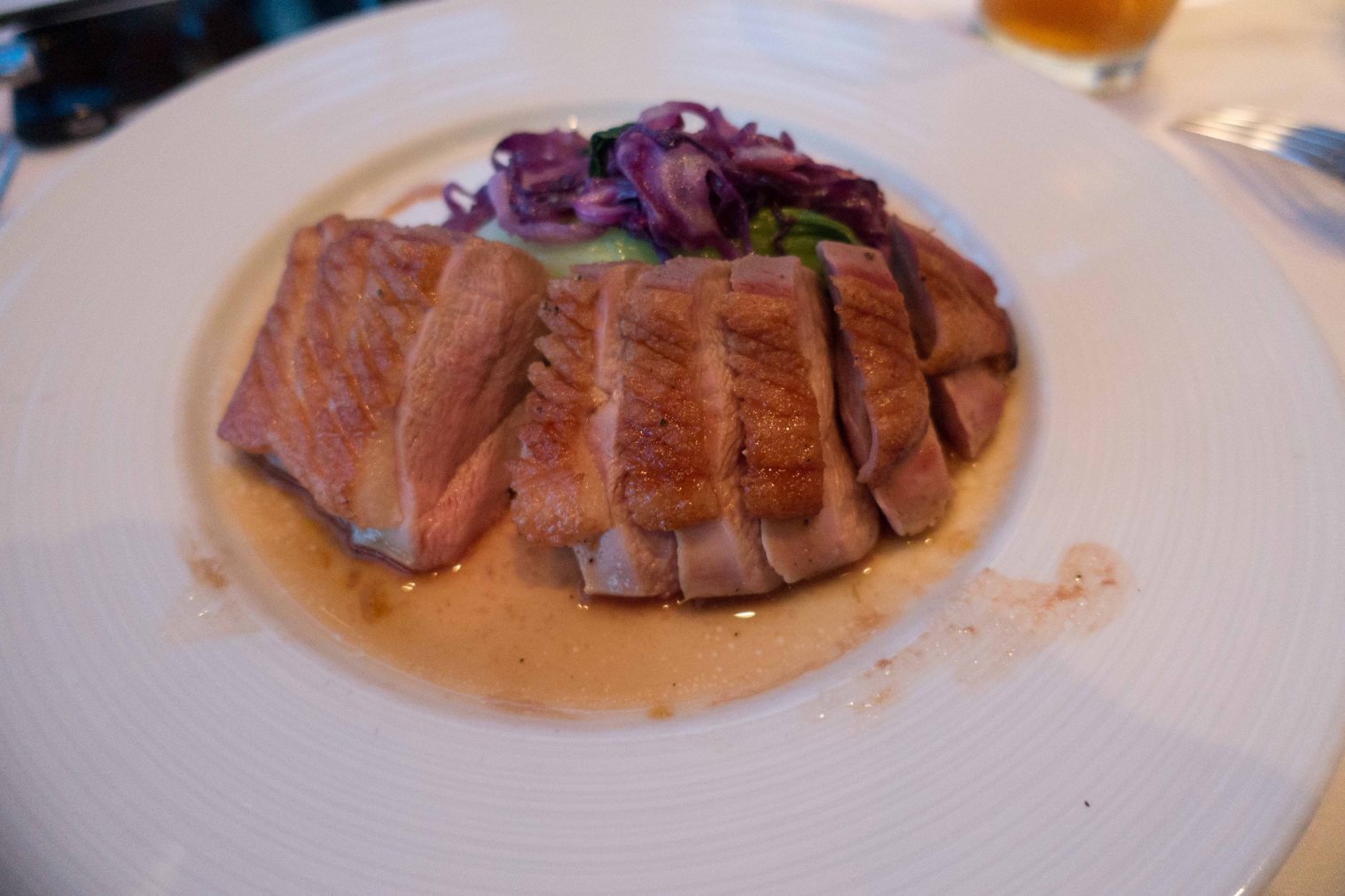 Perfectly cooked, crisp on the outside and rare in the center.  The wild rice mix was delightful, I can live without bok choy.

Gail and Mike both had the black linguine and seafood.  The squid ink that makes the pasta black doesn’t, I think, impart any flavor, it’s just an effect.  The dish comes with shrimp and scallops,  in considerable profusion.

Gail preferred the shrimp to the scallops, which is rare for her–I think the scallops were overdone.  The citrus black garlic sauce on the pasta was different and interesting.  The dish was so large and heavy that for the first time in memory Mike didn’t clean his plate.  I helped him out.

The service was very good.  Our dinner moved along at a decent but not rushed pace, the ice tea was replenished frequently and plates were cleared promptly. The prices are quite reasonable for the location.  It still wasn’t enough.

When you go out for a special meal, in a destination restaurant, you should feel like the restaurant is happy to see you.   This joint, albeit with good food and table service, manages to make you feel like a number.  They know you are most likely a tourist who will never return, and make no effort to even pretend to give a damn.  We felt we were herded like cattle into and out of the elevators, shunted to a crummy table because we don’t matter, looked on as just another number in the process.

Signature at the 95th could be a great experience, if only they cared just a bit about the customers, about making it an event instead of a meal.