We left the place with the coal mine where we never got off the ship, and sailed into some relatively rough weather.  The ship was bobbing and weaving like an overmatched punch drunk boxer trying to score one more payday.

We didn’t care.  This was the night for our big dinner at Le Champagne, the super-special, reservations only, costs-an-extra-$40 restaurant onboard we wheedled our way into after the fiasco on Sunday night.

A small operation, with just 18 diners last night, Le Champagne provides excellent food and over the top service.  They provide a 6 course meal, with foie gras to start and a Grand Marnier soufflé at the finish.

One of the choices is an entire ounce of caviar (not exactly Beluga, but decent).  The caviar comes with the usual accouterments, but only 2 buckwheat blini.  James Bond always ordered double the usual number of toast points with his caviar–now I know why.

Dishes are brought to the table by by a pair of runners, who served all four of us simultaneously.  The dishes are covered in silver domes to keep them warm, then the runners each take hold of the knob atop the domes, and in unison chant “un, deux, trois!” as they whisk the domes away to reveal the masterpieces of the culinary arts below.  Following the unveiling, they then describe the various dishes in a French accent too thick to understand, but it’s classy as hell.

There was one course where everyone else had a cold salad (no dome needed), and I had a soup (with a dome, natch).  Even though I was the only one with a hot dish, the waiter still counted off his un, deux, trois before uncovering the bowl.  Such is tradition.

We had, variously, foie gras, scallops, lobster, lobster bisque, mushroom soup, porcini cappucino (fancy mushroom soup), rack of lamb, scallops, crepes, lava cake and soufflé.  The meal took over 2 hours, which was far too long for Gail, even though I asked them to speed it up.  All in all, it was a splendid occasion.

Today, we toured Halifax, Nova Scotia.  This is the second largest ice free harbor in the world, behind Sydney Australia, and the major point of import/export for eastern Canada..

Halifax was founded by the French in the 1600’s, but the British threw them out in the mid 1700’s.  The French Acadians then moved south to Louisiana and became our Cajuns, many of whom speak a dialect of French to this day.

Part of our tour was a walk through the Public Gardens.  These are proper “Victorian” gardens, which means, among other things, that there is an iron fence all around.  Why you must fence the garden I do not know.

This display commemorates Pier 21, which is the Canadian equivalent of Ellis Island.

The gardens are spectacular, as you would expect from in a very British city.  This is a town where the mayor did not get an official residence, but the Head Gardener did.

There is a lake in the park dedicated to a man who was hanged for a murder he did not commit.  The drawback of swift justice is sometimes grave error, and so it was in the sad case of Mr. Griffin.

Okay, Griffin is my middle name so maybe this resonates more with me. 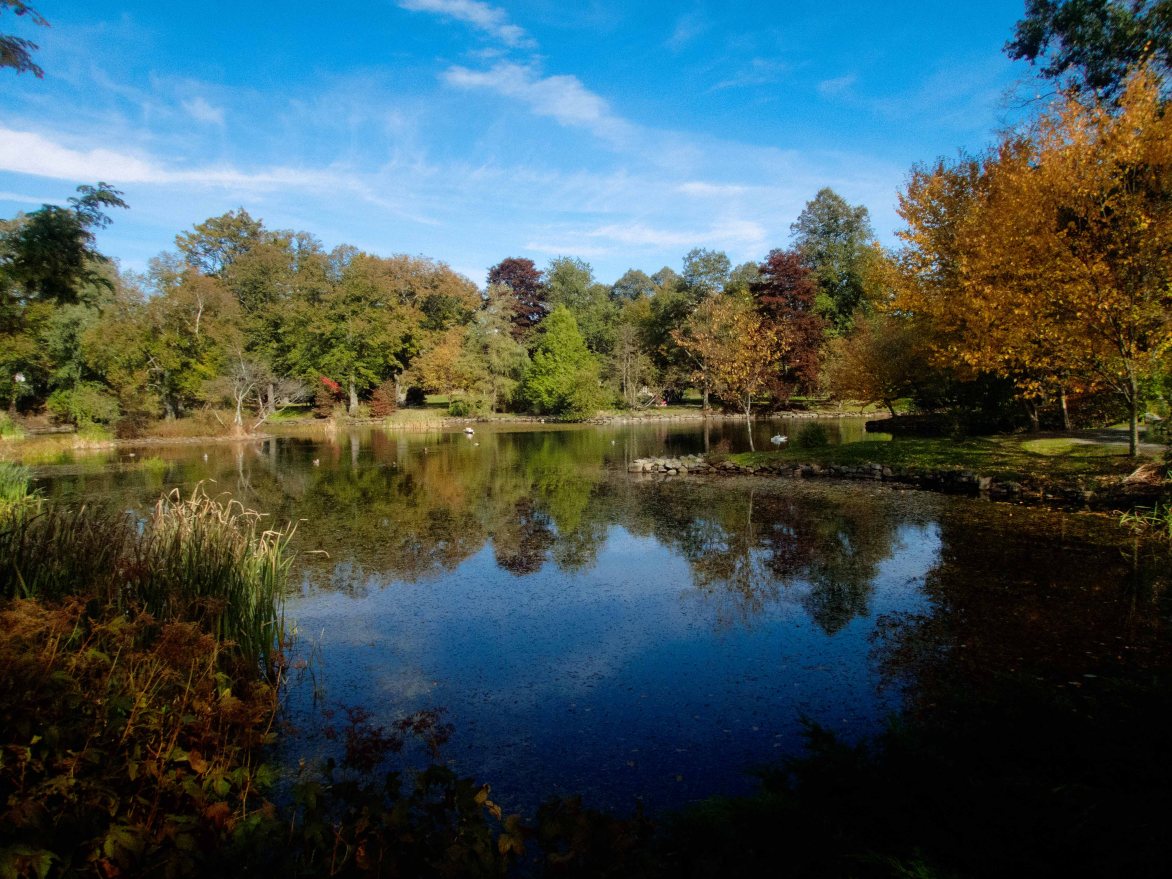 The reason to come here in the fall.

The hill in the middle of town is topped with the Citadel, the fortress designed to protect the city from marauders.  It must have worked, because there never were any.  The guns never fired, but deterrence is the best use of weaponry anyway.

The Citadel is a five pointed stone compound, with some of the coolest cannon I’ve seen:

The tracks on the ground give the weapon a wide range of fire.

There is a museum inside devoted to Canadian forces in the first and second world wars, with considerable memorabilia.  The one I liked best is this brass Gatling gun from the late 1800’s.

From the days when weapons were a work of art.

We left the museum and drove around town looking at houses, churches, libraries, all the usual things.  Our guide was impressive in how he could just talk endlessly.  I got tired listening.

Back to the ship and off to dinner.  One of the nice things about a cruise ship is that they are cooking their 5 or 7 dinner choices in advance, so if you don’t like your first choice you can send it back and get another in just a minute or two.  My veal marsala tonight didn’t thrill me at all, so I traded it out for the tilapia, which was vastly better.

This is an all-included ship–there is no charge for your drinks.  You could sit in the bar all day and try to drink up the cost of the cruise if your liver could stand the assault.  That’s for all the basic wines and liquors–you still have to pay if you want something fancy, and there are wine choices in the thousands of dollars.  Tonight I had a cheese plate after my meal, and asked for a glass of port.  The “house” port they served me was pretty dreadful: tomorrow I will have to see the wine list and try to find something better without breaking the bank.  Who know I’d grow up to be a wine snob?