Sometimes we eat at fancy upscale fine dining restaurants.  Sometimes we just go out for body fuel.  Grub.  Eats.  Last night was one of the latter.

Gail had a taste for the spaghetti with brown butter and mizithra cheese at the Old Spaghetti Factory, on Todos Santos Plaza in Concord.

They don’t take reservations, but you can call and get your name on the list.  I did that and we only had to wait 3 or 4 minutes before we got a table.

We got a waiter named Steve who was a clear professional, proving you don’t have to work in the fancy joints to be good at your job.  He was a relentless up-seller, but that’s what they pay him for.  The basic meals are so cheap the place makes its profit on selling you something extra, from appetizers to special dinners to better wines to high class desserts.

None of that worked with us–we were there for the mizithra and brown butter, $11.95 for the 3 course dinner with salad, fresh sourdough bread, entree and ice cream for dessert. 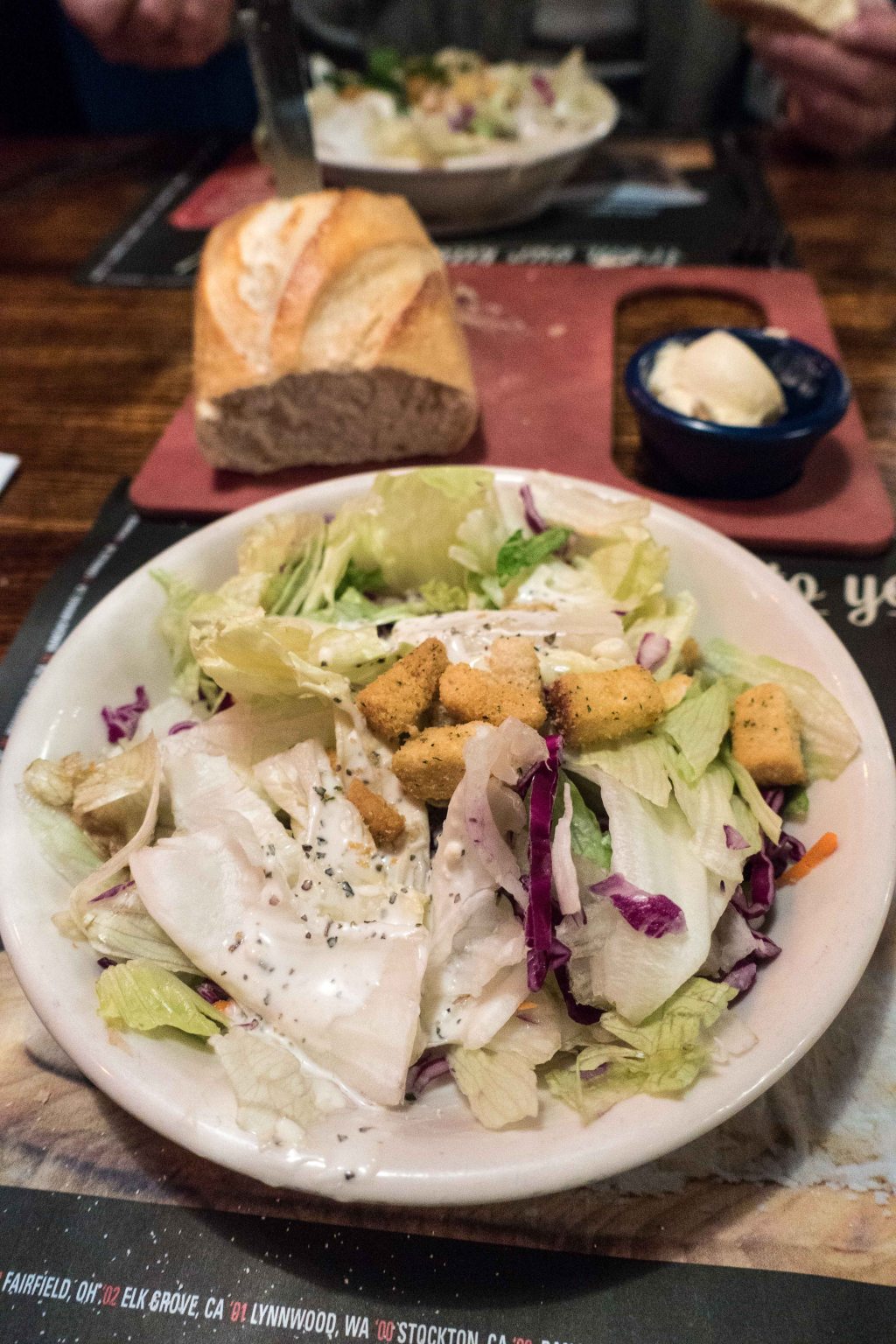 There is nothing fancy here, and I can’t remember the last salad I had with iceberg lettuce, but I like the creamy pesto dressing and the whole thing was fine, in an old fashioned kind of way.

Then an odd thing happened.  Nothing.  No food, no service.  This place thrives on getting the customers in and out and getting some new ones in the same seats.  They can’t afford to let you languish waiting, but that’s what happened for what seemed forever but was probably 15 minutes.  Gail was her usual picture of patience and bonhomie. 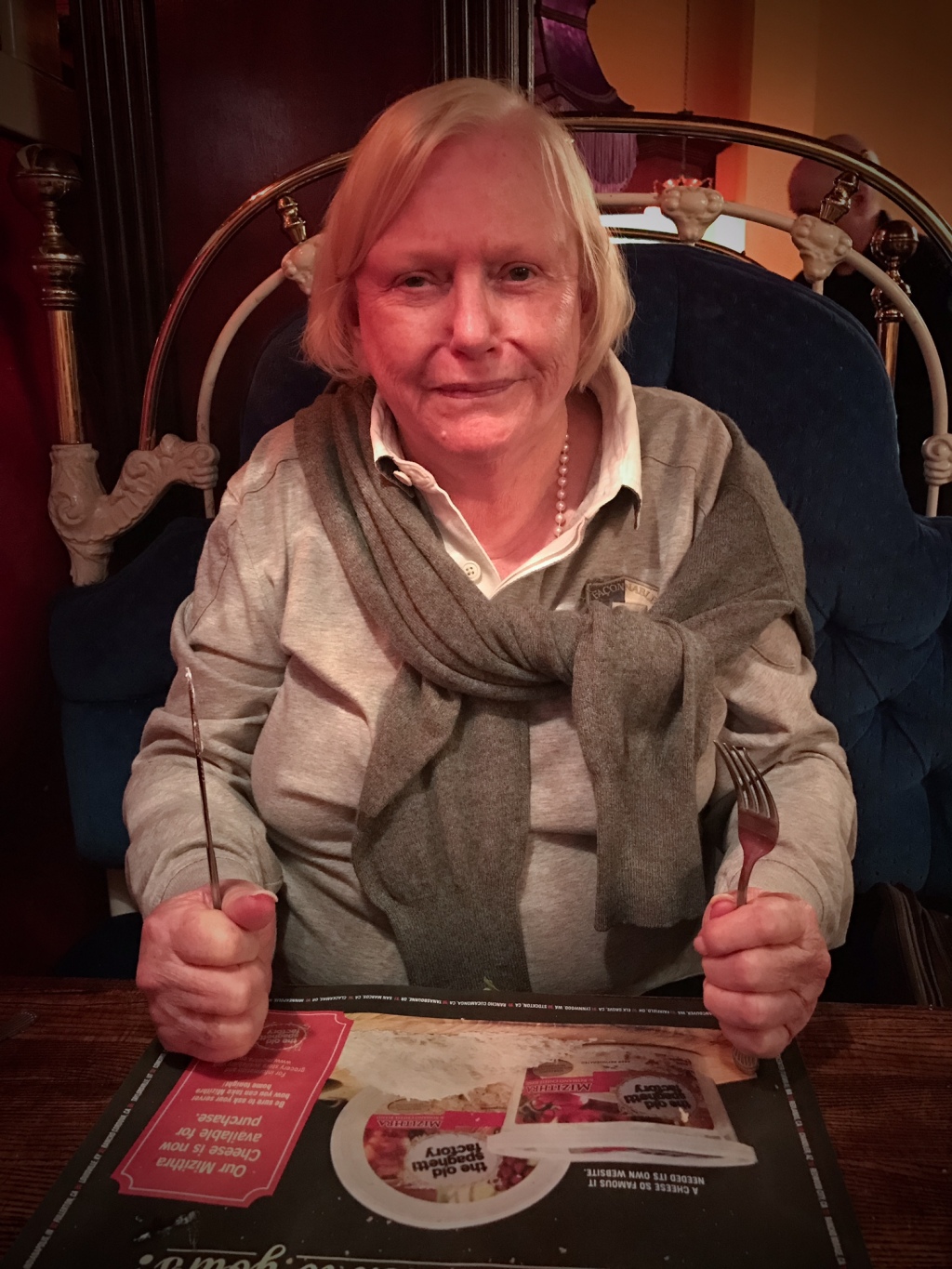 Eventually, of course, we were served. We did add a couple of items to dinner–I had a sausage with my pasta, and we had a “small” side of the broccoli, also served with brown butter and mizithra.  You have a wide choice of pastas, and I decided to try the ditalini, which is Italian for salad macaroni I guess. 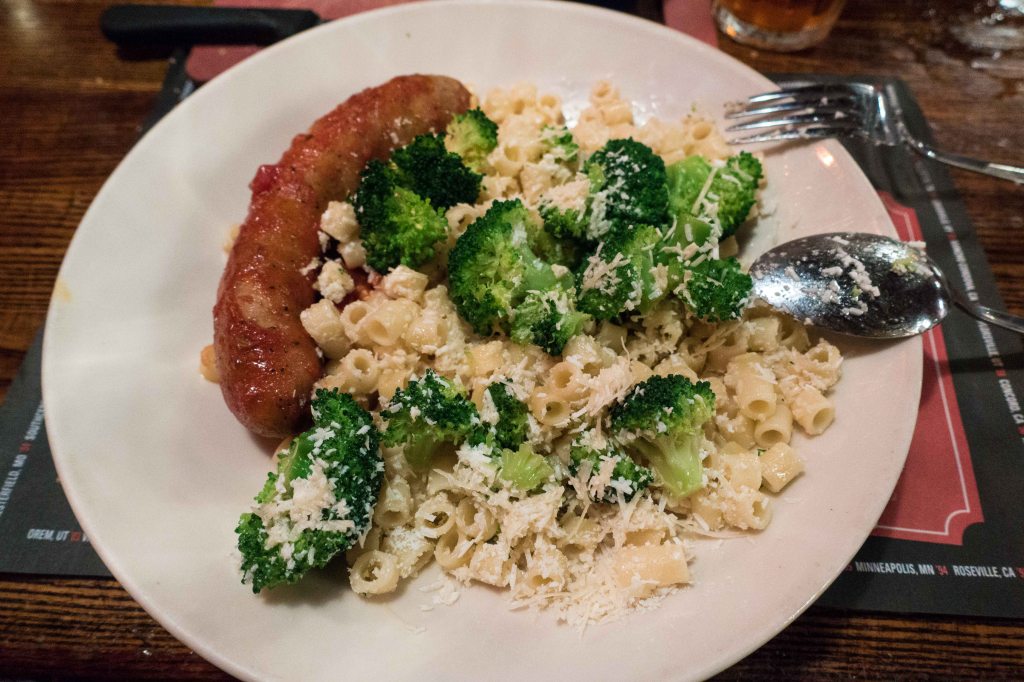 I just added the broccoli right on top of the pasta.  It was great.

Soaking veggies in brown butter and cheese makes them death food, but it sure tasted good.

This is one of my favorite basic meals.  We make it at home, too, but Gail says the Old Spaghetti Factory is better.  Who am I to argue?

We both ate most of our dinners, but needed to leave room for dessert so we brought some home.

You have a choice of vanilla or spumoni ice cream, and should always take the spumoni.  It’s good, but not really authentic because it doesn’t have any dried fruit or pistachios in it.  Spumoni is pistachio, chocolate and cherry ice cream, and it’s just the luck of the draw what combination you get in your dish.  Gail grabbed the one with the chocolate.

Even with the fermata between the salad and the entree, we were in and out in 58 minutes.  A happy dinner, a three course meal for 2 for $50, with leftovers for breakfast, what more could you ask?  I like this place.  Occasionally.