Mike and I played the Fast Pairs today.  Don’t ask.

We walked over to Boardwalk Disney, a very fancy place to hang out, eat, shop, dance, play in the arcade, watch the performers and just have a good time.  I think there are time shares available right on the boardwalk if you want to make it an annual event.

We were headed to the Trattoria for dinner.  Mike told me there were no reservations, which I though meant they don’t take reservations and he actually meant he had called, found nothing available until 8:30 and figured his boyish grin would get us a table anyway.  His grin may be less boyish than he thinks it is.

Going in to the next establishment, we scored a walk-in table at the Flying Fish.  This is a class joint, right down to the silverware:

Pretty cool to have tableware match the theme of the restaurant

There is a river of glass fish flowing overhead, one of the nicest decorating ideas I’ve seen: 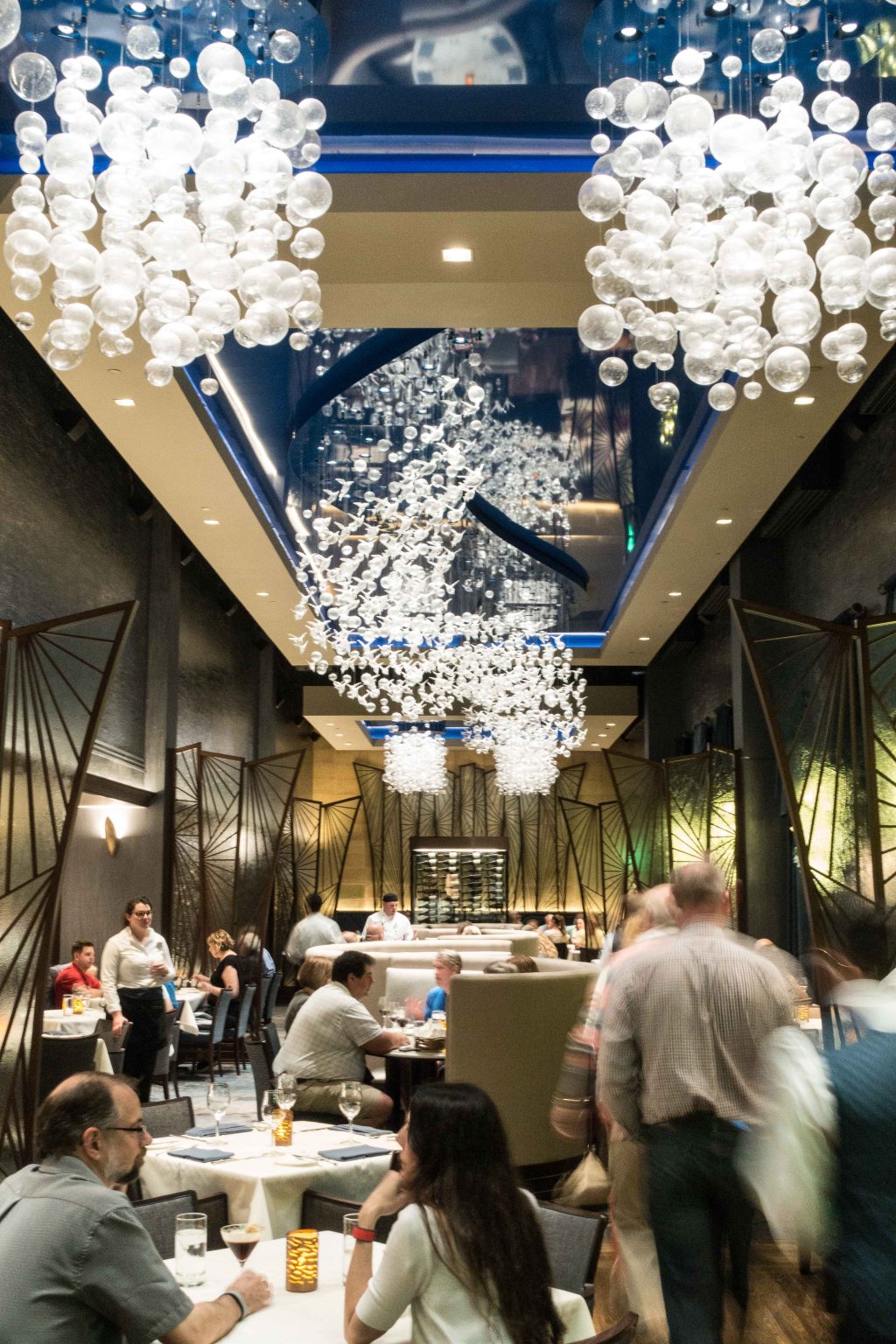 My photos of dinner were rotten, so you can’t see them.  You’ll have to believe me that dinner was very good.

I started with the blue crab bisque, a rich dish with chunks of blue crab, a beautiful presentation (damn I wish I had taken better photos) and dressed tableside with a splash of sherry.  My main course was the Bison Strip, three square chunks of very tender, tasty farm-raised bison.  There was some gloppy red “sauce” I pushed aside to better enjoy the full flavor of the meat.  The meat was accompanied by “ancient grains”, some barley/farrow/groats concoction with string beans and some fancy mushrooms I tossed to the side of the plate.  The whole thing was both different and excellent.

Dessert was beckoning, but nothing on the menu excited me.  What did excite me, and may still happen, is the cheese plate paired with a flight of ice wines from their extensive wine list of these rare and delightful after dinner drinks.  I don’t think I’ve ever seen a flight (3 1-oz pours, $16) offered like that anywhere.

This place is good, but expensive.  When the chicken dinner is $37, you are definitely in the tall cotton.  Be prepared.

After the meal, Mike wanted to hustle back to the hotel, and I wanted to saunter, so off he went.  Linda was on her way in from San Francisco, and her flight had been delayed 5 1/2 hours.  She wasn’t scheduled to arrive until 2:10 a.m., then would have the long ride to the hotel.  Mike did the best he could to help her by ordering a limo to pick her up when she landed, then planned to go downstairs in his jammies at 3:00 am to greet her.  If I was a better blogger I’d have been there to take photos, but that didn’t happen.

Disney does thing right.  On the boardwalk are kiosks with souvenirs, caricaturists drawing kids on Disney characters bodies, more restaurants, a general store with more stuff to buy, and entertainers.  I stopped to watch “Coney Island Chris” do a delighful comedy/juggling act.

Chris is a comedy nerd

This is Disney–when the show is over there is no passing of the hat.

As good as the show was, I also enjoyed the audience–kids, kids and more kids. 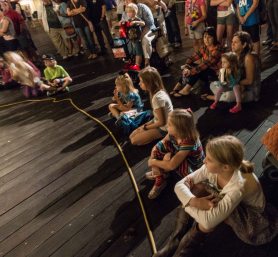 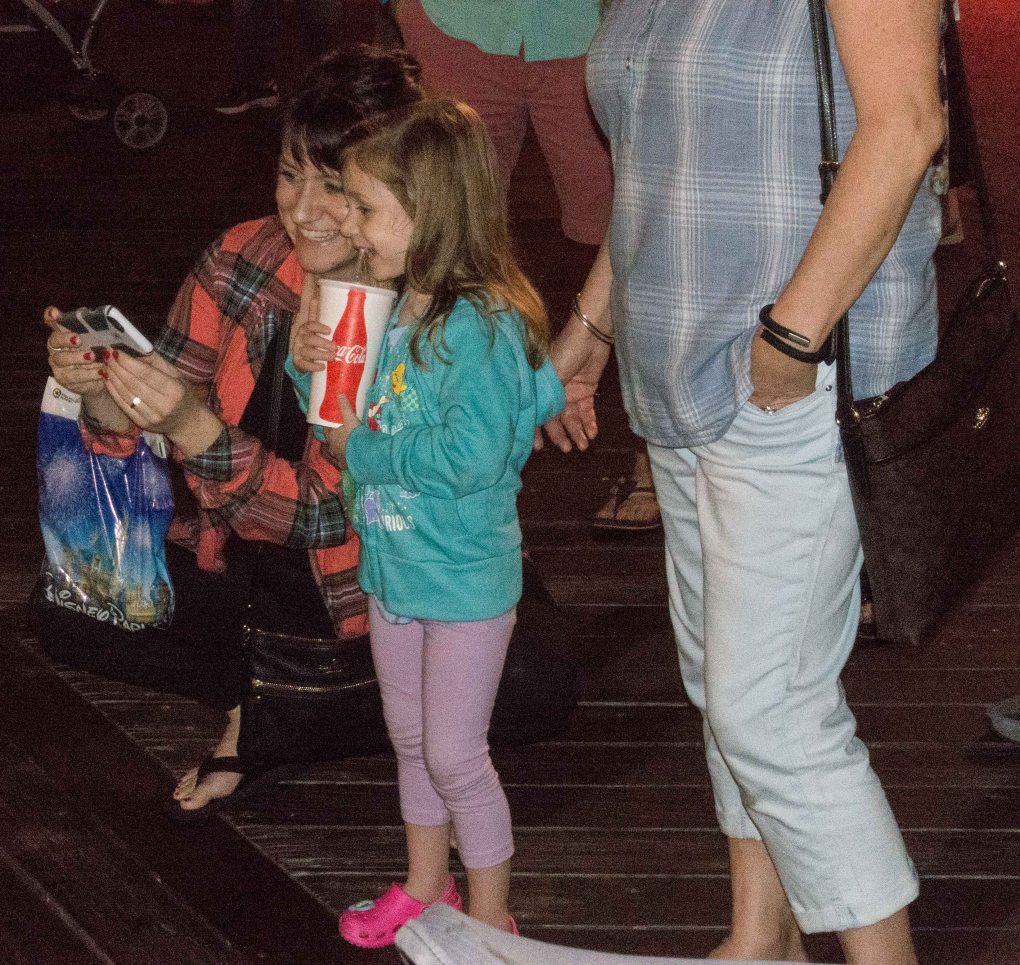 Disney is famous for lighting trees, buildings, bridges and everything else beautifully, so I walked slowly, stopping to brace my camera on anything available to take long exposures.  A smart guy would have a tripod.

The color of the lights change; thisis just one combination

The Boardwalk, with a shuttle boat

Arriving back at the Dolphin I stopped at the Fountain for dessert: 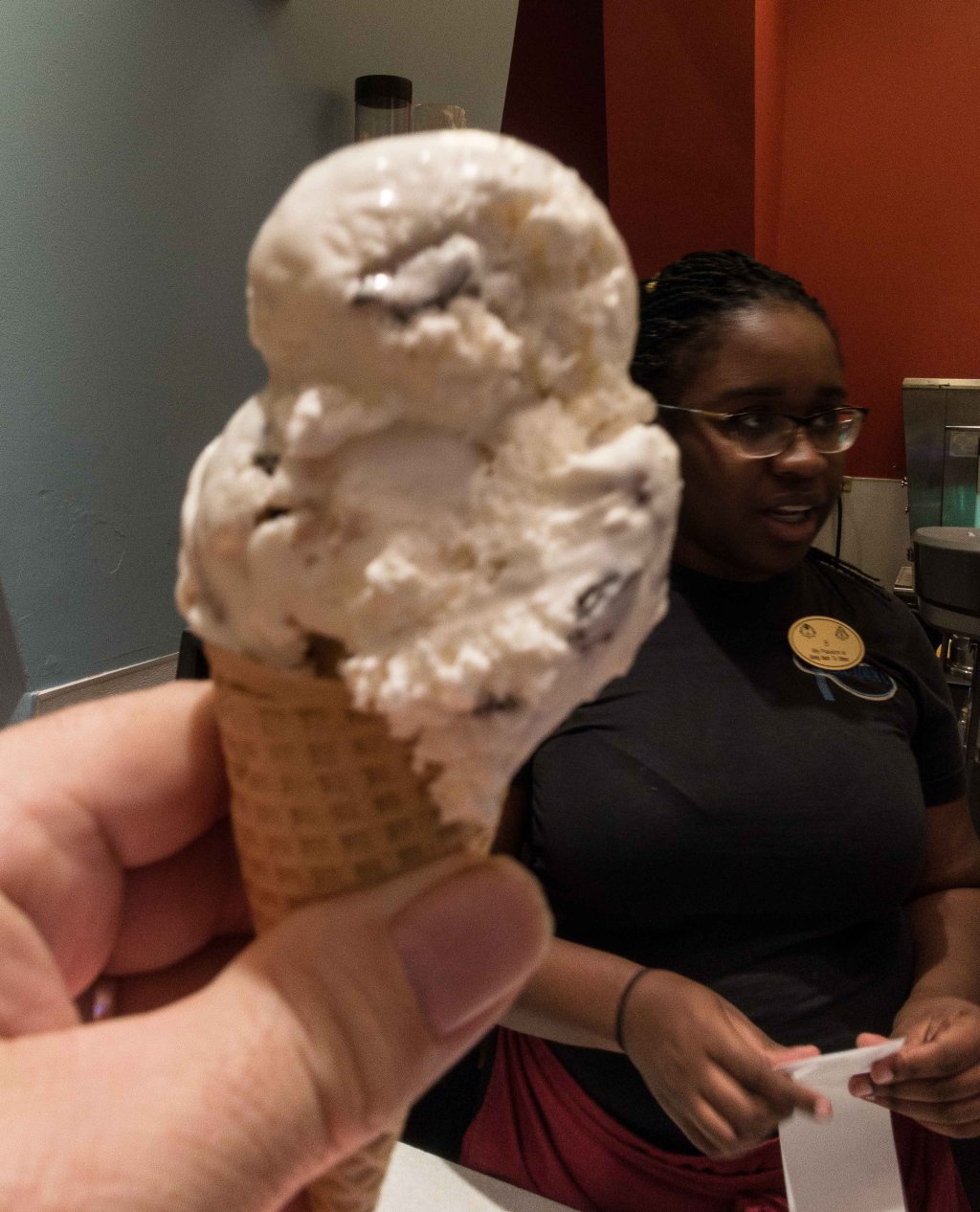 Gail arrived at 9, we had drinks with Karl and Susan then went to bed.  Today we play the Senior Mixed Pairs.  Life is good.