All gags, no plot 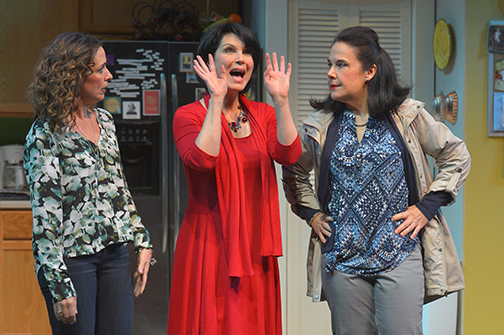 Center Rep again, with Mike and Linda as usual.  We saw Women in Jeopardy, billed as “Thelma and Louise meets The First Wives Club”, a line written by someone who saw neither of those films.

The show is funny.  Lots of laughing happening.  If you think you’re going to get drama, or trenchant commentary on the status of modern woman, think again.  Go for the jokes, because that’s all there is.

Three forty-something divorced women, share a story of their divorces and life experiences, all the stressful moments of dealing with a separation, how to go through it in a healthy and fun way taking advantage of the frustrating parts, moving a long the legal processes of a prenup and taking the positive side out of it. This ladies adventure start with their new experiences and couples, one of the actually has a boyfriend. The boyfriend is exceptionally weird, and by happenstance the employer of a young woman who has disappeared.  Is he the killer?  This plot was written in an 8th grade English class, and got a B-.

The directing, by Michael Butler, is first rate. The dialogue is crisp and fast, with three women cutting in an out with nary a skipped beat. Scene breaks involve cast members dancing downstage to hip-hop music while stagehands work their magic behind them.  The fast paced show moves along smartly, unhindered by deep meaning or difficult plot points.

The cast is excellent. Six actors, four of them Equity members.  Jason Kuykendall plays a dual role as Jackson, the boyfriend, and Sgt. Sponsüllar.  There doesn’t seem to be any possible reason to have these two characters who look exactly alike; there is no mistaken identity, no separated-at-birth twin gag, just something bizarre stuck in for no reason. Perhaps it’s just a cheap way to use one less actor.

The first act just sort of drifts along, lots of gags but nothing compelling happening. In line for ice cream at intermission, the two guys behind me declared the play “pretty pathetic.”  The ice cream was great, though. Haagen Dazs Dulce la Leche.  Why don’t all theaters sell ice cream at the interval?

The second act was better. More and better and faster gags. Plot up to 10th grade level.  The acting stayed superb. The scene breaks had even more dancing.  I really enjoyed it.

And then it was over.  They essentially announced ” We found the killer–it was xxxxxx.” and the curtain came down.

Women in Jeopardy is in no jeopardy of moving to the big stage in New York.  It is, however, funny as hell and a decent way to spend a couple of hours in the theater.  Bring two extra bucks for the ice cream.