You go to Israel, it only makes sense to go see Old Jerusalem.

The walls of Jerusalem at night

There’s thousands of years of history, and I don’t know enough of it to even sound vaguely well informed.  So today, we have lots of pictures and not so many words.

Bar Mitzahs are permitted here three days a week, and we were there on one of them.  Happy, joyous, festive occasions, frequently high-budget productions.  We watched two of them parading in towards the Western Wall:

The more casual and fun approach 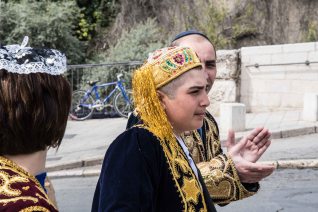 The high-dollar and serious approach

Travelling with his own band.

Getting into the central Western Wall area entails some serious security–if you are a man.  The lines are separated by the sexes, and the women’s line moves much faster. The metal detector for the men buzzed over the two small coins in my pocket.

Once inside, you see the Western Wall, which is the outside of the Temple.

The area in front of the wall is divided 2/3–1/3 into male and female sections.  The Bar Mitzvahs were being celebrated very close to the separating wall so that mothers and sisters could look over and see their sons on the big day. 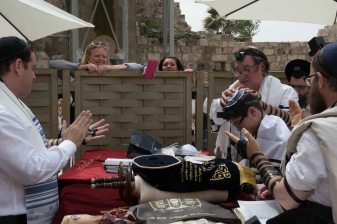 Kate looking over at the big doings

The men praying at the wall fascinated me. 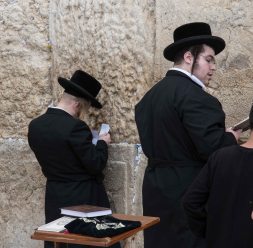 There’s always somebody with his own twist on things.  I noticed this man praying and getting his exercise simultaneously.  Look at what he has in his hands.

Some faces are too good to pass up.  This gentleman was a bookseller.

Here’s another face–this time a little girl having a big day with the family.

Look at her tongue sticking out.

Later, we took a tout of the tunnels beneath the area, and saw excavations many, many feet deeper.  Old cities didn’t grow outward, they grew up, so one civilization is built on top of another. I was amazing seeing the walls Herod built 2000 years ago.

There are 9 gates into the city, not all still working, named for the cities they led to, or the figures that adorn them, or historical persons, or, in the case of the gate we left by, the main cargo that passed through.