The air is good in Buenos Aires

We’re off on an adventure.  San Francisco to Dallas to Buenos Aires to Ushuaia to a ship taking us to Antarctica.  I’m going to see the penguins.

We got to Buenos Aires (big time travelers call it “BA”) Friday morning, and slept most of the day away.  In the evening, we went to a tango show, just like all the other tourists.  There are 175 people on our tour, and 70 or 80 of us took this little jaunt. 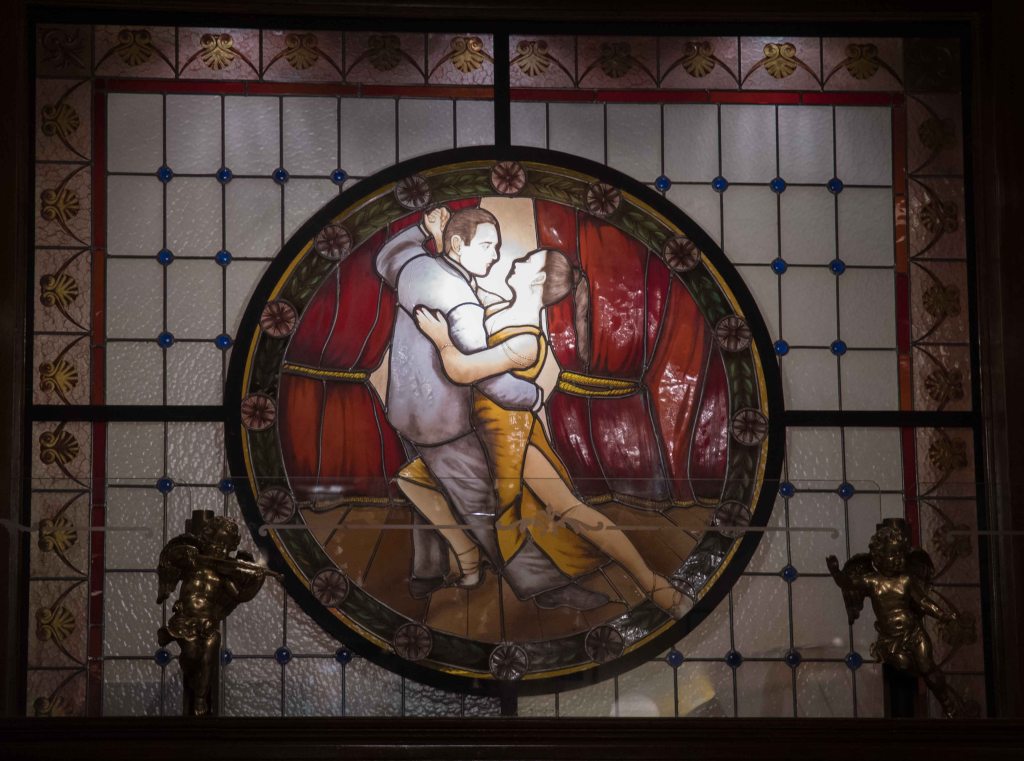 We went to Cafe los Angelitos,  which makes a hell of a good living getting tour groups in and out with military precision.  We filed in, were herded into seats in long rows of tables and the food, orders were swiftly taken and the food proceeded to race out of the kitchen.

The menu is, shall we say, compact.  You can get steak or chicken or some veggie plate.  I’ll bet they can predict withing 2 or 3 plates how many of each to prepare every night.  There are endless bottles of white or red wine–no wine list, just white or red.  If you try to put water in your glass you confuse the system.

My appetizer was gravlax, with some potatoes covered in a spicy mayo.  Yes, I pushed most of the mayo aside.

I think everyone in the photo is from our tour group.  There are sub-groups from the Commonwealth Club, Harvard alumni, U Washington alumni, Duke alumni, Bryn Mawr alumni, Yale alumni, and some others.  It’s a wildly over educated and well traveled group, and should be interesting as hell.

Dinner pushed through in record time for South America, the show started about 10.  There were 5 couples of dancers, plus one premiere couple, 2 or 3 singers and a 5 piece band centered on the bandoneon, a Latin variation on the concertina or accordion.  The dancing was fast and furious, the music was relentlessly uptempo and the show moved along nicely, except for a couple of musical interludes to give the dancers time to change costumes and catch their breath.

The opening act was a period piece showing the origins of tango among the poorer and lower classes of Argentine society 100 years ago. 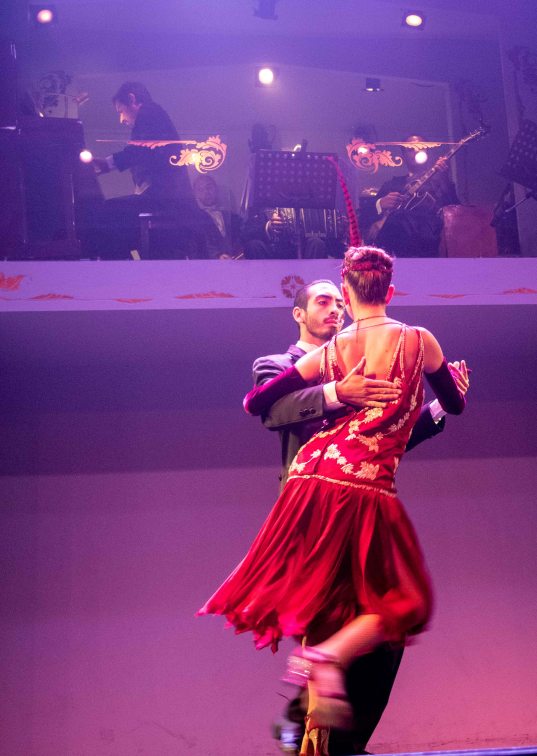 The stars with a solo performance

You couldn’t really have a show in BA (he says, trying to sound cool) without a nod to Evita. The lead singer came out to a marvelous production of the song Buenos Aires, where Evita is a young woman coming to the big city and telling it she’s going to be a star.

The band is on a ledge over the stage, and for this number the female dancer starts on their level and then oozes herself down to stage level.

I was impressed by the choreography and the strong graphic elements of the staging and the dance.  Here is the opening of a very modern number: 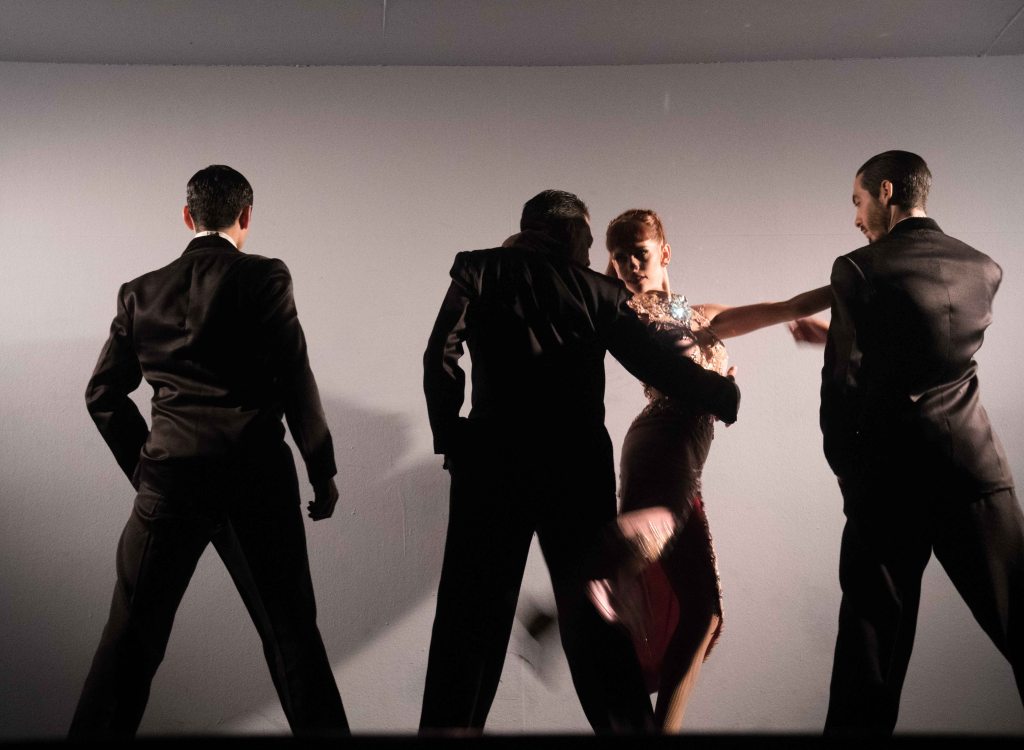 The show had both a male and a female singer, of whom I thought the woman the stronger.  Again, beautiful costuming and dramatic lighting combined to make a first rate experience.

The show was long–we left the hotel at 8:30 and didn’t get back until almost midnight.  20 minutes less would have been fine with us, but you can’t say we didn’t get our $115 dollars worth.

Saturday morning Kate and I took the city tour–Gail slept in and Brad went swimming.

Buenos Aires is a city of 4 million, with 10 million more in the surrounding metropolitan area.  it has a long history of money and glamour–remember the name Argentina comes from the silver that was so abundant when the nation was a province of Spain.  There are huge mansions that once belonged to silver barons and owners of immense ranches exporting beef to the world.  These mansions are now often embassies and museums.

We visited La Recoleta Cemetary, home to hundreds of magnificent marble mausoleums dating back over 100 years.  If your family can’t afford the upkeep and rent, you can sell the family crypt to someone who will change the name and perhaps completely redesign it.  You have to take the family bones with you, though.

These are the final resting places of the very rich and famous, with impressive sculptures and rich materials. 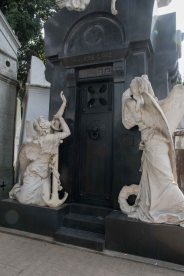 This immense crypt belongs to a family of Catholics who found out their ancestors were Jews fleeing the Inquisition, so the building has both crosses and a menorah.

This sculpture is of a young woman who died in 1970 in an avalanche.  Her dog’s nose is polished bright by the hundreds of people rubbing it for luck.

And finally, the most noted crypt of all, that of the family Duarte, whose most famous daughter was Eva Peron.  She was laid to rest here years after her death and an amazing journey in which her remains were moved and hidden and buried in Italy.  Now she is home with her family. 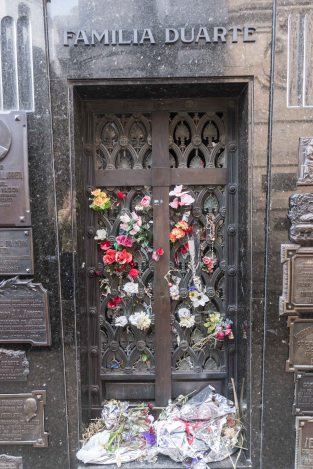 Coming out of La Recoleta Cemetery, we found this vast ficus tree, whose branches stretch for more than 100 feet and have to be held up by steel stanchions or this piece of statuary. 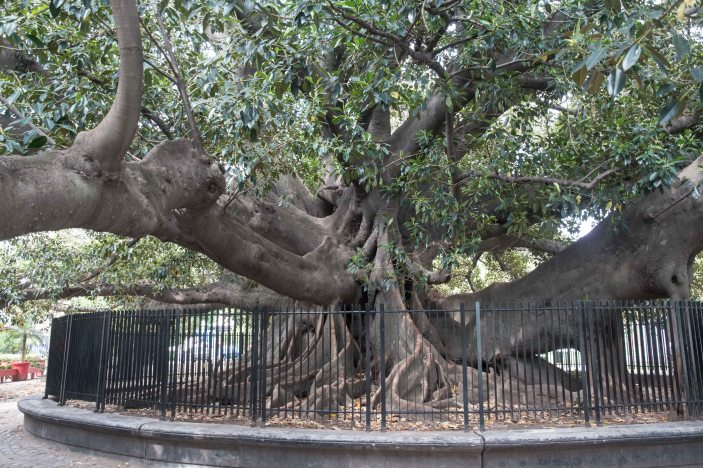 Driving down the street, I saw something amazing–a Citroen Deux Chevaux touring car.  Everybody has to have a gimmick, I guess, and this one is pretty interesting.  I’d take a day tour in it.

Our final stop was the Boca, a very touristy district that once was where the poor people lived and made their homes of scrap metal painted with any color they could get their hands on.  Now it is very artsy, with dozens of artists and artisans selling their colorful wares on the street.  Even on man with no hands who paints with the brush in his mouth, right there on the sidewalk.

For some reason I never learned, the Boca is marked by three dimensional caricatures of the famous and the infamous, mostly on balconies overlooking the pedestrian streets.  Here’s a gallery of them. 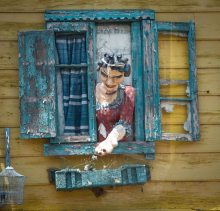 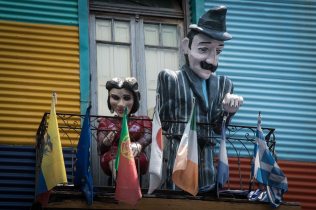 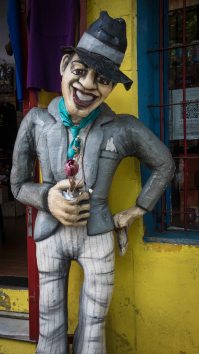 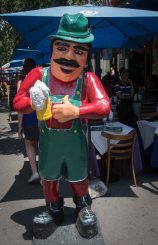 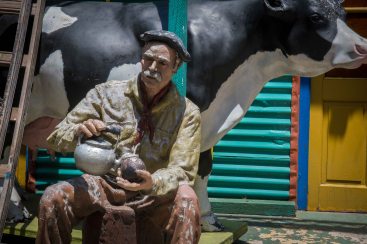 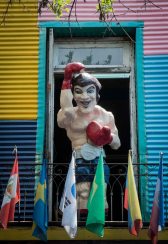 Later in the afternoon, we went shopping on a pedestrian mall near the hotel.  I had to buy a pair of shorts in the first store I saw because it’s so damned hot and humid here, there is an air quality inspection every week in the house I live in.  Silly me, I didn’t think I’d need shorts on an expedition to Antarctica.

Then the bad thing happened.  We had been warned repeatedly to beware of thieves, but failed to take proper heed.  I heard a scream, turned, and found that Coleen, a member of our group, had been attacked and her Rolex stolen right off her wrist, and the thief was racing down the street to jump on a waiting motorcycle and make a fast getaway.

The good news is that she has insurance, she has money and she isn’t hurt.  By chance there was a police car along in 30 seconds, so she went to the station and gave a full report.  It won’t get her watch back, but may help to catch the bad guys.

Now I have to hit the sack so we can leave for the airport at 6 am for Ushuaia, the southernmost city in the world where we catch out boat.  It could be worse–some people have to leave the hotel at 3am.

They promise some sort of wifi on the ship, so I’ll post when I can.

3 thoughts on “The air is good in Buenos Aires”