A few blocks from our hotel is Cuba Street, a walking street with bars and restaurants very close to the University of Wellington, so it is full of young people celebrating the end of the week.

We strolled down to dinner, enjoying the energy and the crowds. 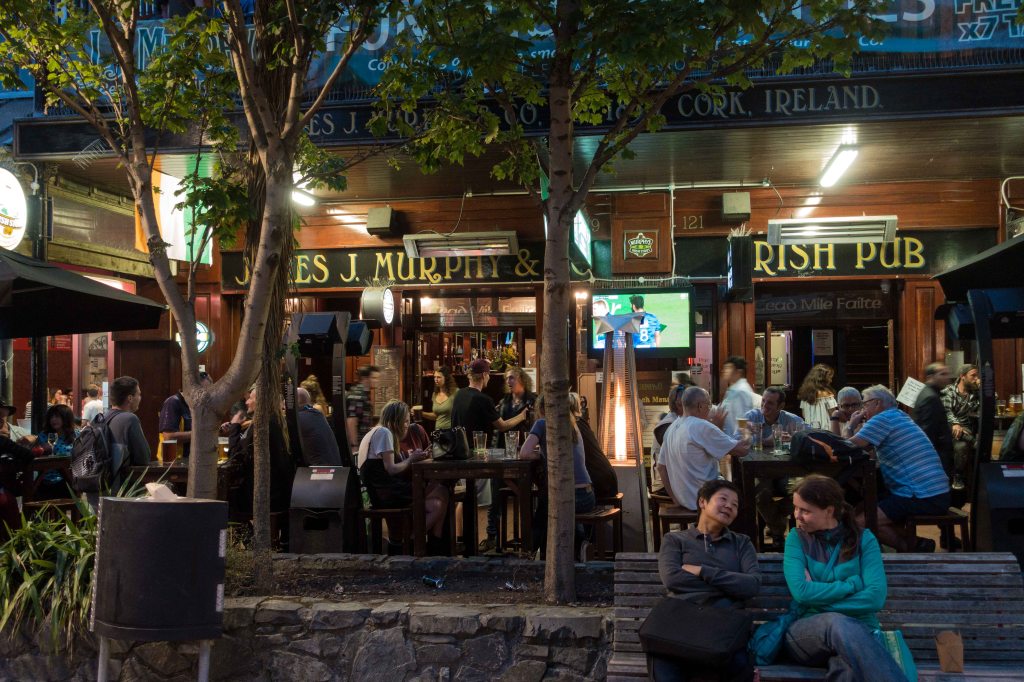 Just one of the many establishments where people enjoy eating and drinking al fresco.

There were street performers, who clearly had a schedule for the best spot.  We watched this juggler/performer/comic for a while, but he took too long in the setup. 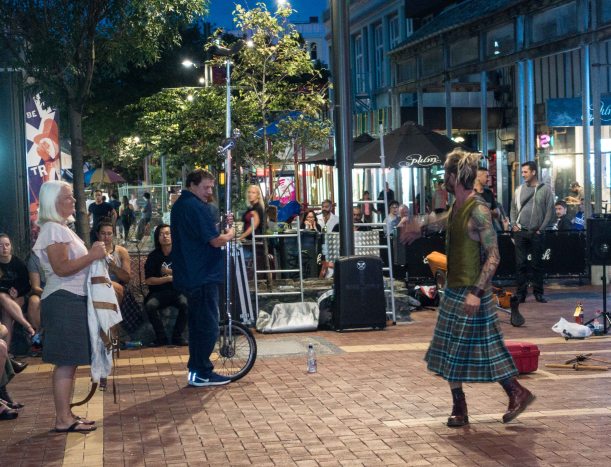 The beginning of a straightjacket escape gag 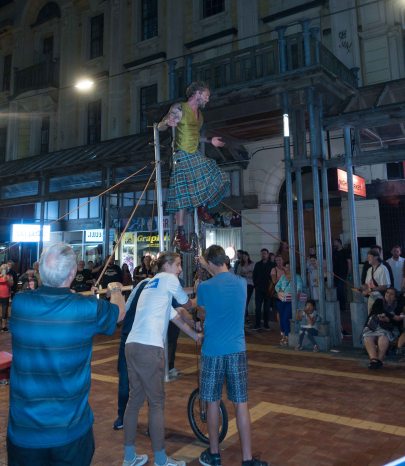 Climbing up to a 10 foot unicycle.

Eventually, we settled on Scopa, an Italian restaurant for dinner. It was very modern, open to the street on one side and full of young people, mainly women.  I have no idea why.

The service, like everything in this country, was friendly and efficient.  I had to drink Diet Coke because there doesn’t seem to be any iced tea here.

Starting out, I had a caprese salad.  This one was excellent, with a broad selection of heirloom tomatoes and leaves of fresh basil. 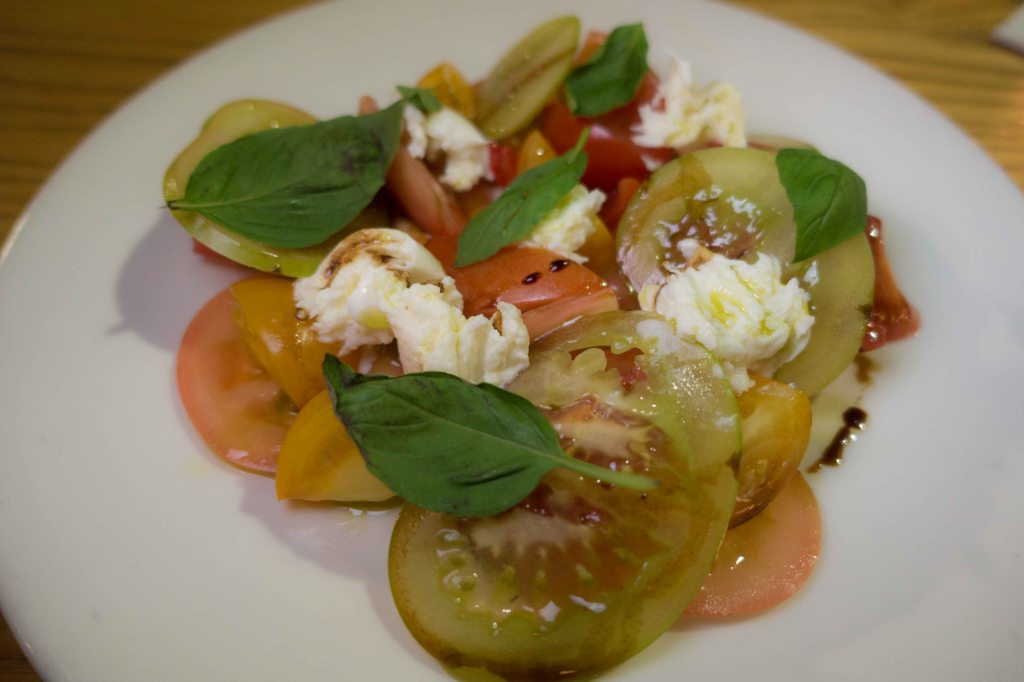 David and I both chose the spaghetti, with roasted broccoli and a pesto of fresh peas.  It was bright and fresh, the pasta cooked perfectly. 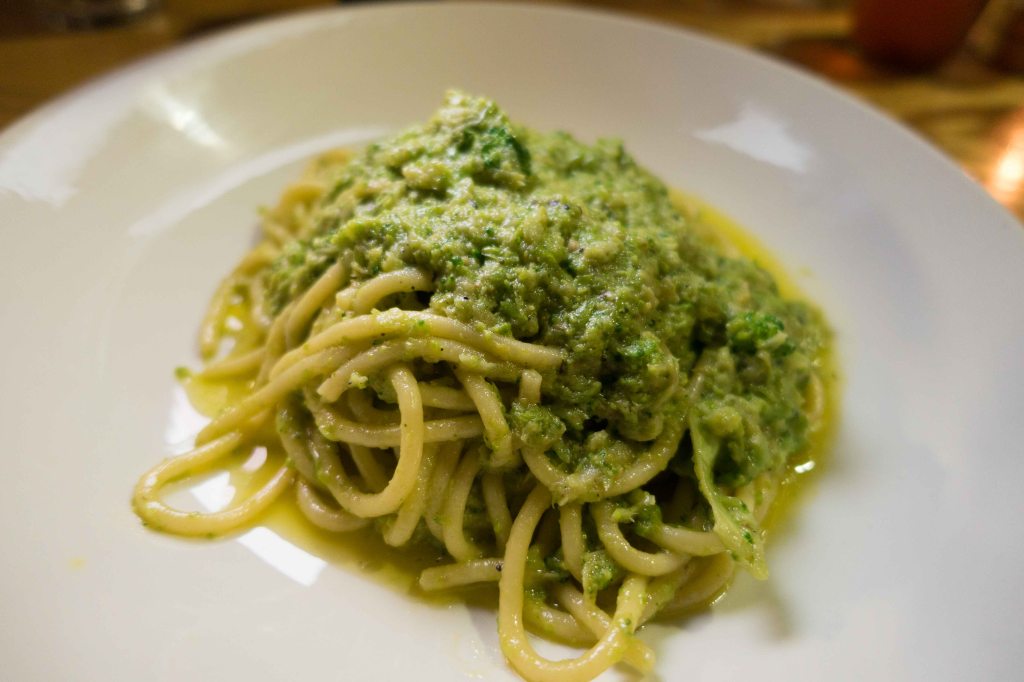 We were seated in the front of the store; I was facing the street.  Looking out, I was stunned to see this phenomenal vehicle waiting at the light. 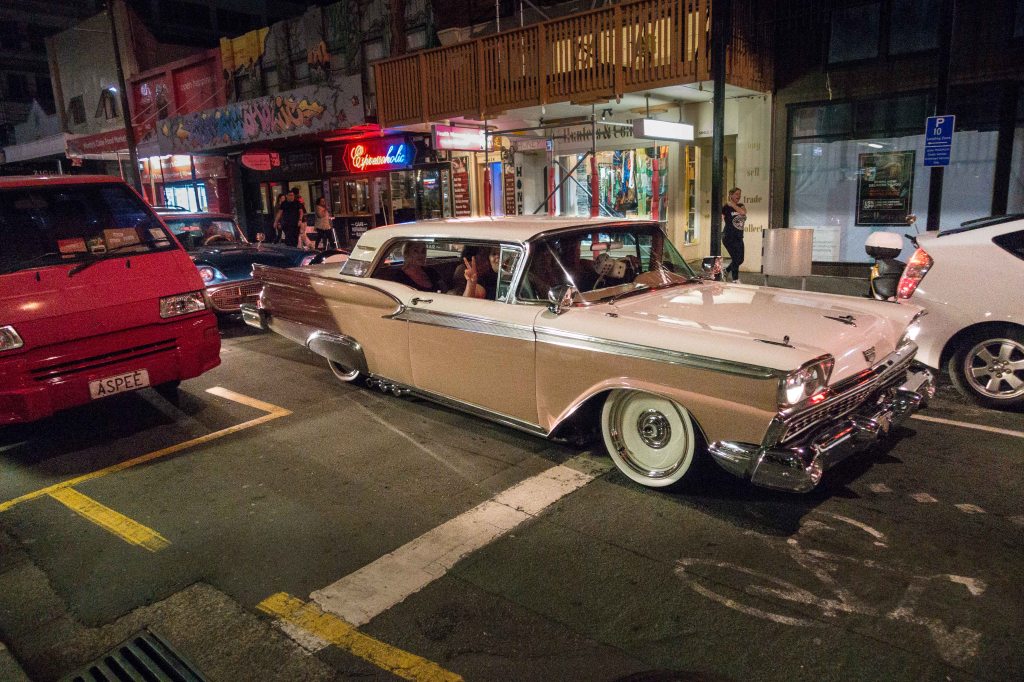 That’s a left hand drive 59 Ford Galaxy with every possible bit of chrome and a full Continental kit on the rear. 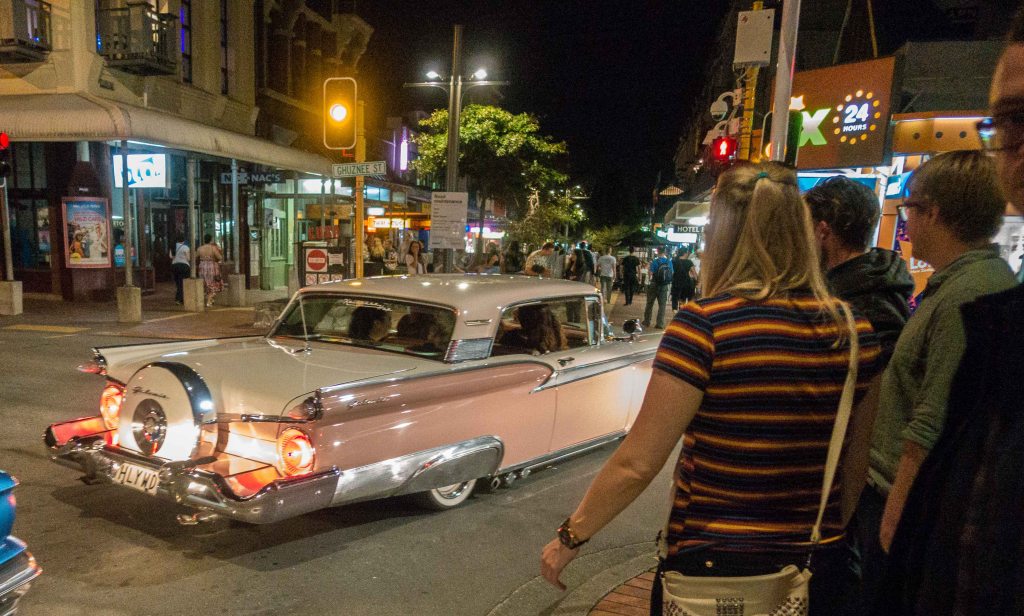 I know the year because there came around again 10 minutes later and I went out to talk to the four very friendly women in the car. They were just cruising the main on Friday night, like we did in Walnut Creek when I was a teenager.

Dinner over, I set out on a mission.  I want to be better at taking pictures of strangers on the street, and resolved not to go back to the hotel without getting a few.

First, I found an oddity–most street performers are male, and very few play the sax.  This woman defied the probability: 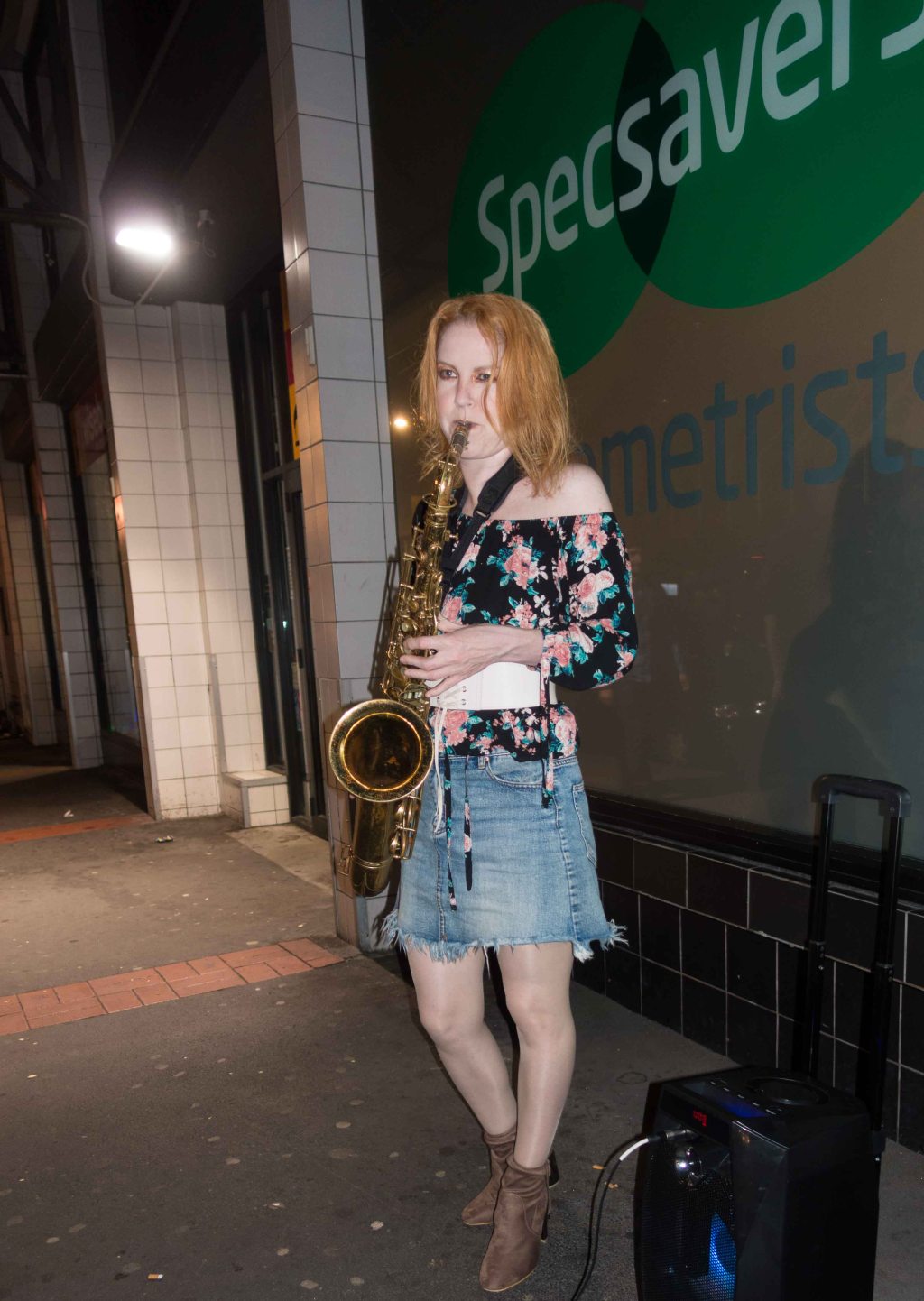 I’ve certainly seen women walking late in the evening holding their shoes, but always it’s because their high heels are not comfortable.  This is the first time I ever saw a woman stop and take off her flip flops to walk on a very dirty city street in her bare feet: 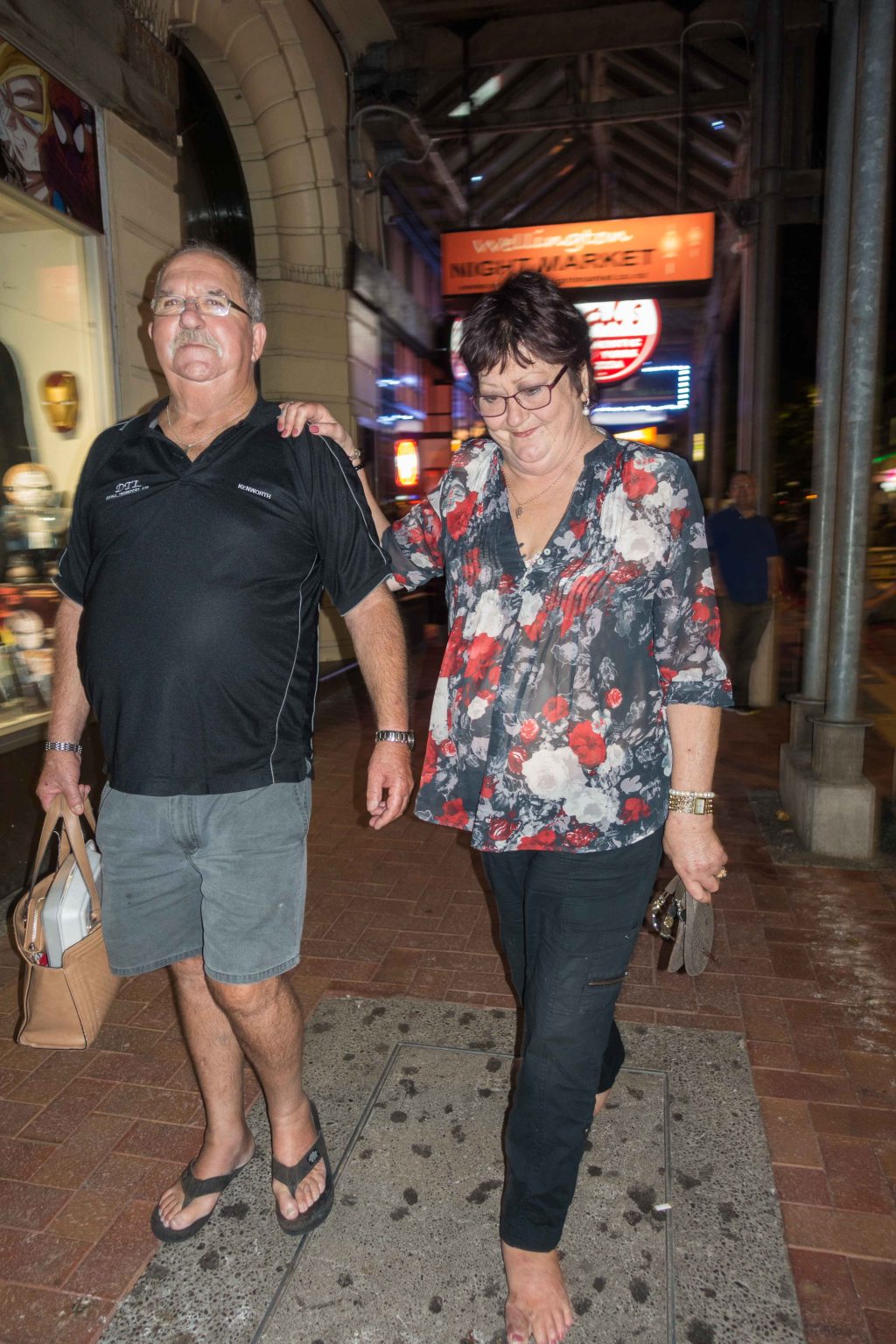 The earrings this woman was wearing caught my eye first, but she turns out to be some kind of performer who was out drumming up an audience for a show tomorrow night.  Between all the noise and her accent I didn’t quite understand the details, but I got the shot anyway. 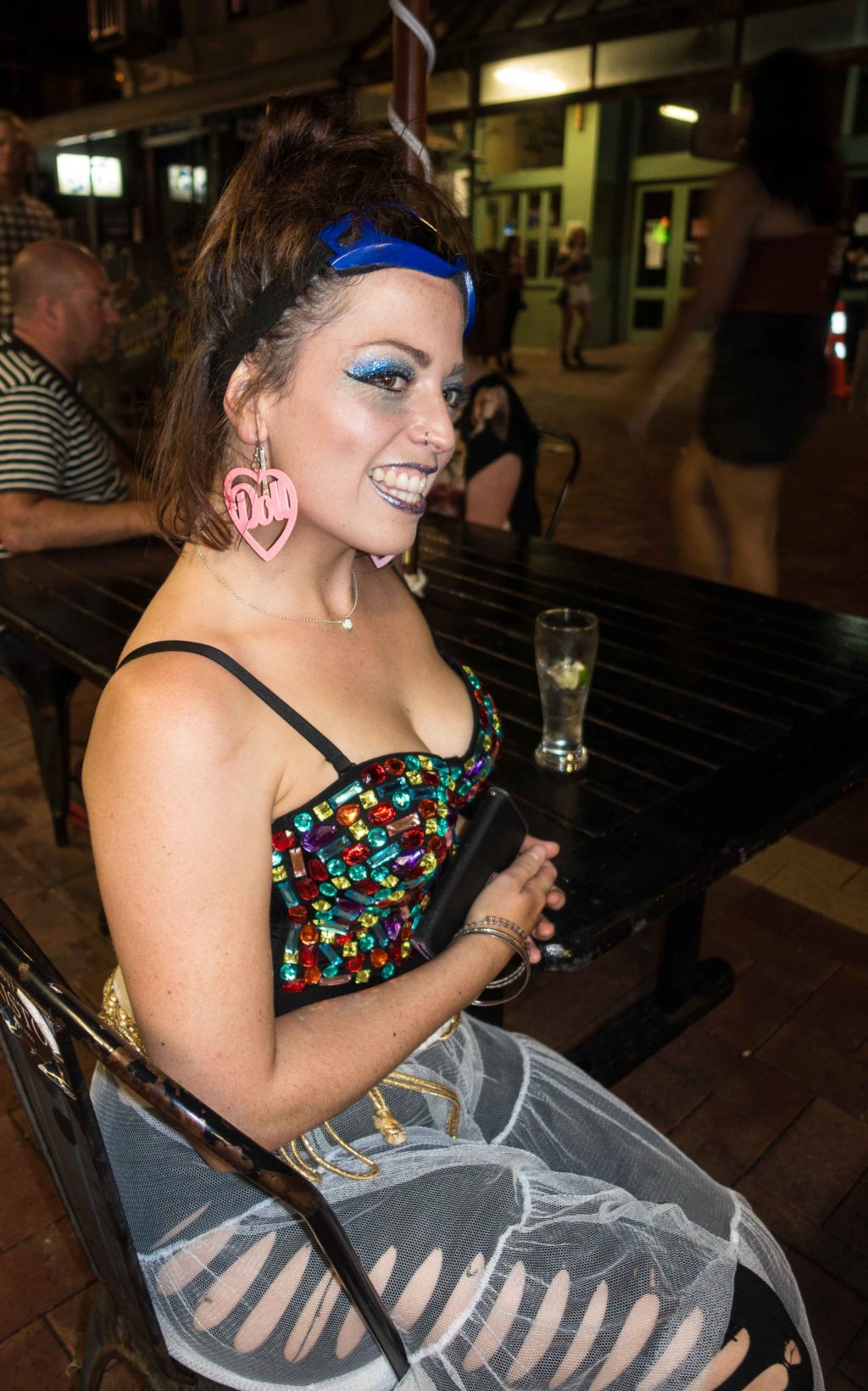 Mission accomplished, David and I piled into a taxi, headed up the hill to the hotel and now I’m done posting.  Good night.