Getting home the hard way 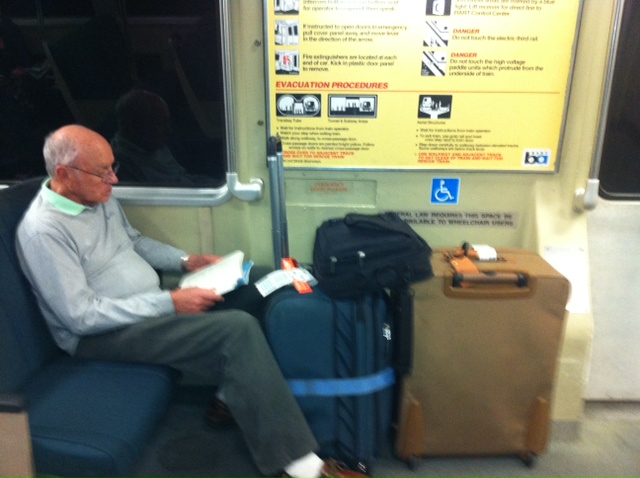 The luggage goes in the wheelchair space, if possible

I should know better than to get a window seat.  The body of the plane curves in and there is less space.  Guys my size belong on the aisle.  Yet, there I was, shoehorned into a seat 17A on the flight home from Dallas, with all three seats in the row full.  This was not a fun ride.

Landing in SFO, I thought at first I had gotten on the wrong plane–I didn’t recognize the terminal.  It finally got through my little brain that American Air now uses the renovated Terminal 2, so of course I hadn’t seen it before.  It’s beautiful–and a shorter walk from the gate (which always seems to be the furthest one out) to baggage claim.  I think I’m going to like it.

Nobody was picking us up, so Mike and I went home on BART.  This is not my first choice.  I rode BART too much to grad school, and don’t much care for it in general, and certainly not with a pile of luggage, but it’s cheap so there we were.

First, I had to commit a crime, although I didn’t realize it at the time.  Mike buys the senior tickets, $24 worth of rides for $9, and he had two of them, so he gave me one thinking that I’m now a senior.  Last night I looked at the back of the ticket and noticed that they define “senior” as over 65, so I guess I’m glad I’m not in jail for defrauding the system.

From SFO, you take a shuttle train to the BART station, then through the gates to wait for the train.  As we got there, the station agents were announcing a system-wide slowdown to inspect because there had been an earthquake.  I guess I should have expected that on the 105th anniversary of the Big Quake.  It wasn’t bad, though, and in 15 or 20 minutes we were on our way home.

BART wants people to use the system to get to the airports, but they don’t make it easy.  If you travel, you have luggage. If you ride BART, there is no place to put it.  These facts don’t play well together. 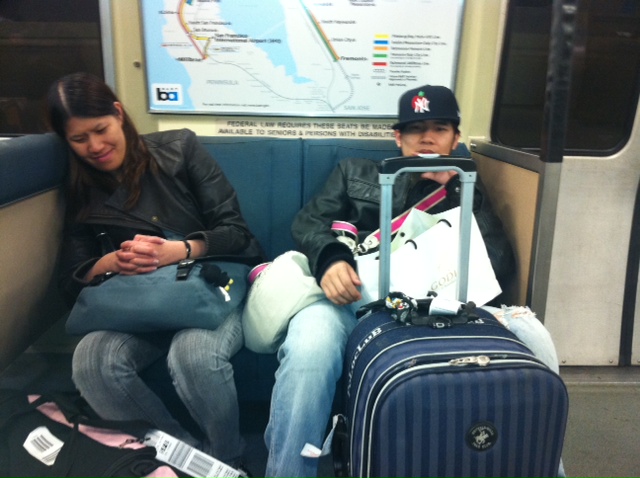 These two just came from New York. That looks less comfortable than the plane.

I managed to stuff the bags into the space reserved for people in wheelchairs, but would have had to move it if necessary.  The people on the other side of the door were just stuck with all their bags crowded around them–in a heavy traffic time it would have been a real mess.

BART is always exceedingly noisy, with the screeching of the wheels especially painful in the tunnels.  Thankfully, I still had my ear plugs in my pocket, so I could mitigate the unpleasantness.  I don’t see why you should have to endure long term hearing damage just to ride the subway.

We left the airport at 3:00, so we beat the rush hour.  Micky got off at Walnut Creek, where Linda was waiting to whisk him home–last night was Passover and there was a seder to make for the family.  I continued on the Pleasant Hill, and had to take a cab because the car large enough for our luggage has a flat tire.  This added $12.00 to the cost of the trip. Such is life.

I got out of the cab at 5:00 on the dot, so it took exactly 2 hours to get home from SFO on BART.  Regular fare is $9.90, the senior fare is much cheaper, if you stay out of the hoosegow.

It isn’t my favorite way to travel; too noisy, too crowded, no place for the bags.  But the price is right, it’s ecologically sound and you get to see parts of West Oakland you would never visit.  Try it, but bring ear plugs.  Don’t cheat on your age.

One thought on “Getting home the hard way”