What would an Elks club be without an Elk?

I’m getting to write this while all my friends are still playing in the tournament.  We had a miserable day: none of us were capable of bidding the coldest of slams, we lost the first four matches and withdrew, to the great relief of the staff who started out  with 11 teams in Bracket 1 (the top eight teams by points, and 3 more who preferred to play up) necessitating a round-robin, which nobody likes.  When we left, there was no longer a need for the round robin, so everyone was happy.

Although we were done playing, there was still the matter of lunch–I had paid for it, and who can pass up a buffet?  This one was catered by the Elks Lodge, and it was just fine–four different kinds of sandwich, three salads, a huge plate of fruit, iced tea and lemonade.  The best $8.00 spread in town.

Setting up the lunch 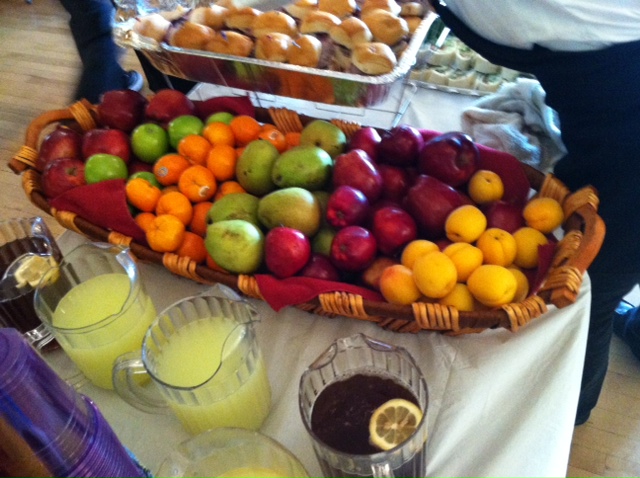 Food in general was wonderful this weekend.  Xena made trays and trays of phenomenally good egg salad. There was fruit and crackers and bagels and peanut-butter filled pretzels.  Plenty of drinks available, although we always seem to run out of Diet Coke.

20 years ago we had tournaments at this Elks club, but it seems like we have outgrown it–Saturday afternoon we were simply crushed.  The air conditioning is either freezing or blistering.  The parking is simply insufficient–and that’s without the jerk in the crappy green car (protected by The Club™)  who blocked the driveway completely.

We’ll put another successful tournament in the record book.  Jerry Chamberlain did a fine job as Chairman, excepting the silly early start on Friday.  He promises not to do that again, and I promise not to go to the movies that night.

Just to finish it all off, here’s to the best dressed guy at the game today.  Steve Castellino, playing with Sid Lorvan and not willing to be out-dressed by the ever-dapper Sid:

And yes, he plays as well as he dresses.

One thought on “Sunday dreadful Sunday”