That’s the news and I am outta here

Maybe I just had too much fun.  Maybe not.  But I’m going home on the early flight Sunday morning, skipping out on the last day of the NABC.  I know, it sounds heretical, but you can only lose for so long before it starts to eat your soul.  And something’s eating my soul with ketchup and pickles right about now.

We played in the North American Swiss on Friday, starting out with a bang and then just tapering off into oblivion. We could have gotten our Q if it had been possible for Mike to make the slam he audaciously bid on the very last hand, but possible wasn’t in the cards.

Today we played in the KO event, sort of the loser KO for non-qualifiers.  Went down in ignominious flames.

Then we played in the loser loser Swiss, the last bastion of hope to salvage some pride and masterpoints for our team.  Won 2, lost 2, no glory.

We could play tomorrow, but I wanted to play pairs so we would be finished earlier and not have to worry about making the plane.  Micky didn’t want to play pairs, and decided to leave early.  That motivated me to change my flight and head home to my sweetie.  A much better choice, I should think, than watching the sad disintegration of the tournament as they are breaking down the tables all around you while you play.

At least dinner was good.  We went to Von’s Roast House, where they feature roasts of all kinds, and 1000 kinds of liquor.  The liquor doesn’t interest me, but the prime rib was good. 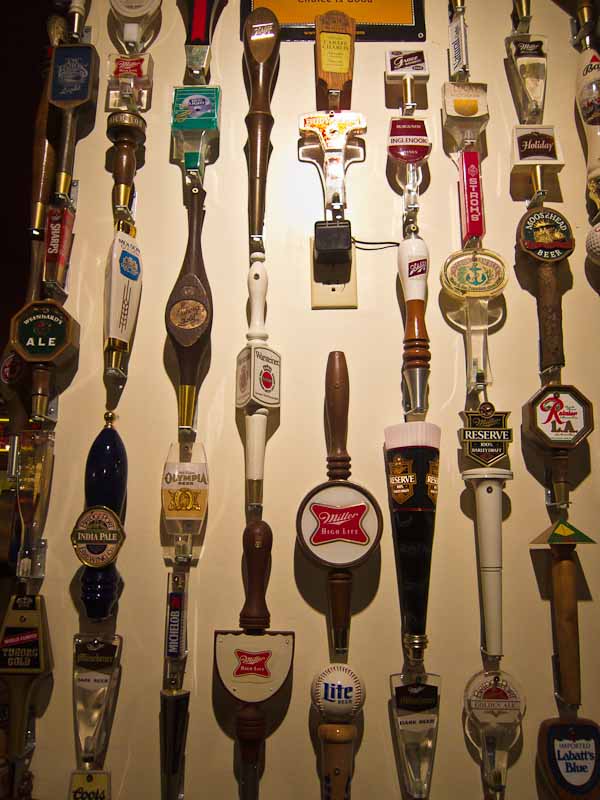 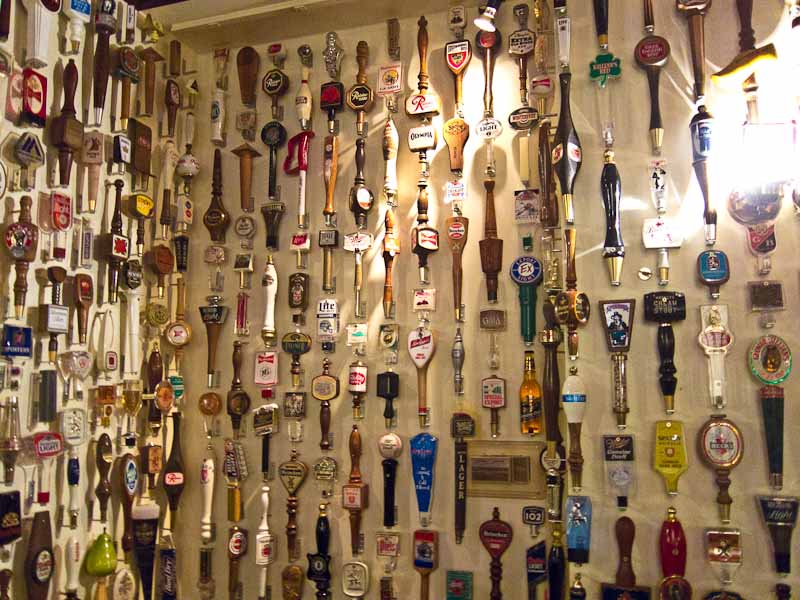 All the walls. I never knew beer pulls were an art form 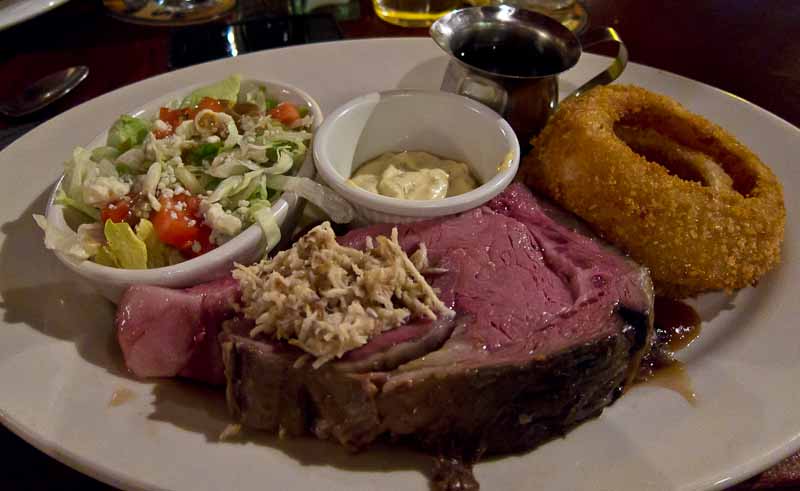 Tom the healthy eater had the salmon–always a good choice around here.  You just can’t hope to operate a Seattle restaurant without a really good salmon on the menu.

That's one beautiful piece of fish

Von’s is right downtown Seattle, across from the mall and Barneys, near Nordstrom and all the other good stores.  The streets were full of people doing their Christmas shopping and looking at all the decorations and events.  The mall somehow makes it snow indoors, which delight the adults and amazes the kiddies, of whom there seem to be thousands.

These people are having a drink outdoors. It was 37 degrees. I don't get it.

Even the street performers are getting in the mood.

Santa Claus and the little drummer boy rolled into one.

I saw lots of people in the hotel who looked as though they had come to the big city for a weekend of shopping, carrying five and six bags from as many different stores.

I love NABC’s, the [what’s the word for three times a year?] meeting of my group of friends from around the country and around the world.  I like the big-boy bridge, I like the socializing, I like the politicking, I like seeing the different cities.

I like it better when I win something.  I played OK but not great, my partners and teammates would probably say the same.  If you don’t play great, you need luck, and we had precious little of that, losing one match after the opponents mis-bid to a bad slam that made.

The local group did a great job.  The events were well run (except for the incredible slowness of the pairing in the North American Swiss), there was hospitality, there were gifts (we all love swag), there was everything but success at the table, and that’s not their fault.

Another NABC is in the books.  Next stop, Memphis in March.  That will be worth the trip just to go back to the Civil Rights Museum and the Rock and Soul Museum. I’ll play better, I just know I will.