I don’t want to march!

Busy first official day of the tour.  We started with an 8:30 meeting to get acquainted, then got on the buses and headed to the Ho Chi Minh memorial.

Uncle Ho is a big deal here, as you would expect.  He led the country for 40 years or so, defeated the French and then defeated the US.  Not bad for a tiny country.  When he died he wanted to be cremated, but the powers that be were catering to the USSR at the time, and created a huge, Soviet-style mausoleum for him. 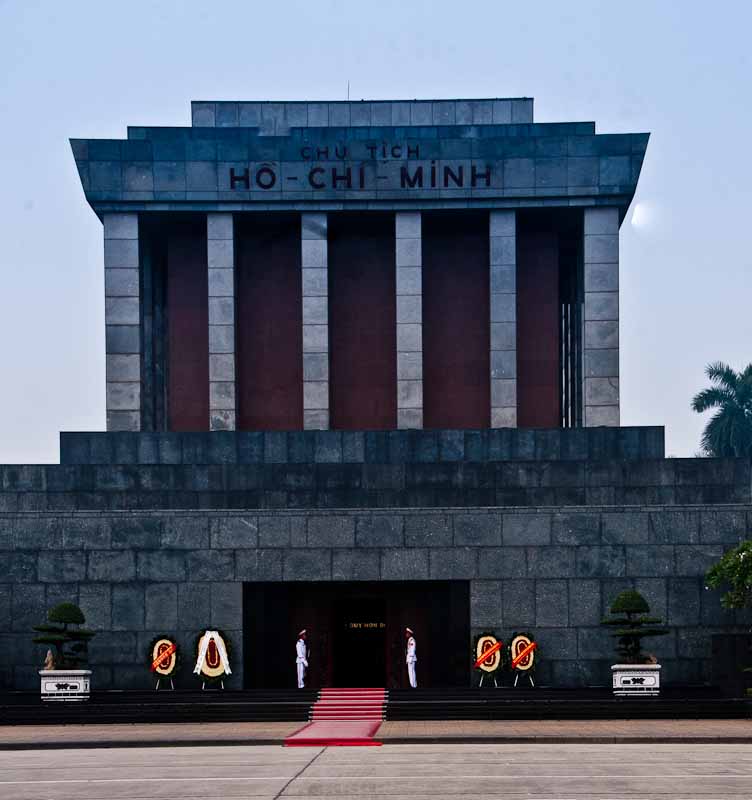 The beauty of photoshop–the air here is awful, it was overcast and grey on top of that. A few clicks, and it looks a ton better

This is as close to a holy shrine as this country gets.  You can’t take your camera in, you have to wear long pants, there are goose-stepping guards performing ceremonial duties everywhere.  And then there is Ho.  Embalmed perfectly, except for a completely white complexion.  Glass coffin, you file through and then out.  Thousands of people a day, including all the schoolchildren.  I’ve seen Mao in Beijing, now I need to go to Moscow to see Lenin.  Nothing says loving like looking at a stuffed dead guy.

Then we saw his house.  His cars.  His books.  Noticed that his house didn’t have a bathroom.

Just sitting with the guys.

This is Annie. All the kids spoke pretty decent English, and wanted to talk.

After that, we went to the temple of learning.  Or something.  Ran into an old friend–Mike Bandler was just walking by.  OK, Micky and Linda joined the tour a few hours late but we’re all having fun now.

Back to the hotel, and out to lunch. 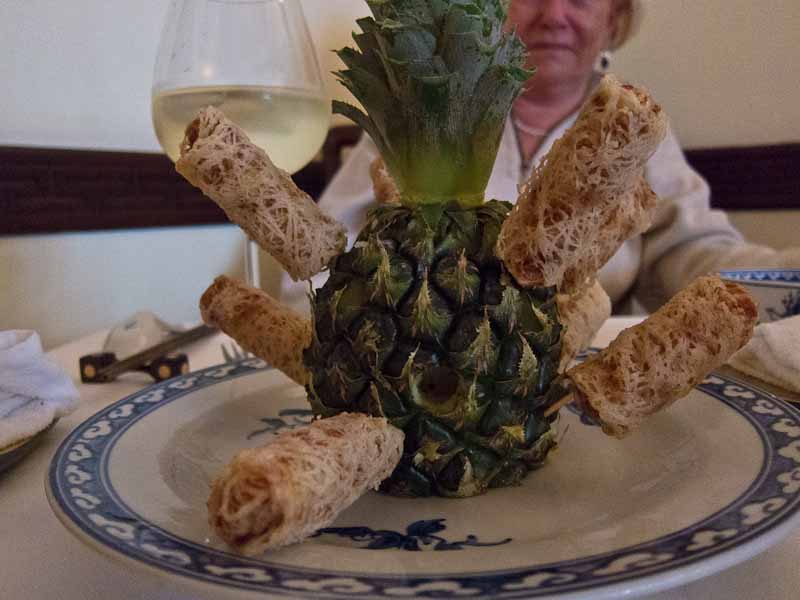 Not-very-special fried spring rolls, but the presentation was interesting. There was a candle inside the pineapple.

After lunch was somewhat less fun.  We started out with a mass cyclo ride from the hotel to the Old Quarter.  Forty pedi-cabs lined up,  one for each of us.

Future president of the ACBL

The guy who had to pedal me around town sure drew the short straw today, but we had a good time wandering through the narrow streets where a tour bus would not be able to go.  When a part fell off my camera, I jumped out of the cyclo and raced back through the insane traffic to retrieve it–and found that people were pointing it out and carefully avoiding running it over.  The traffic looks  crazy, but they have a system and it seems to work.

At least most of the time:

Just around the corner from our hotel.

This was a relatively minor fender-bender, but nobody could move the cars, the police were there, forms had to be filled out, there was the usual mob of lookey-lous, traffic was snarled.  You would think that they could handle this sort of thing quickly and easily, you would think wrong.

Anyway, the cyclo ride ended and we had to re-group:

Look who found a way to be in charge.

Now comes the bad part.  We set off on a what was billed as a walking tour of the old quarter.  It turned into a forced march, with endless walking much much too fast so that we couldn’t really see anything and weren’t having a good time.  Then there was a mutiny, somebody explained loudly and forcefully to the guide that he needed to SLOW DOWN and things slightly improved.  Except we noticed that we were walking in circles, right past places we had already been.  Fortunately, the march ended before it became necessary to make the guide walk the plank, but it was close.

I could save this and use it as a generic temple photo. Nobody would ever know.

After a quick look at another temple (which looked much like the others we have seen), we had the dubious pleasure of seeing a Water Puppet show.  This is  a theater with a 2.5 foot deep pool covering the stage.  Puppets enter from the back, and do things.  What things, I don’t quite know.  I think if you were a Vietnamese child, familiar with the history, mythology and archetypes of this nation, fluent in the language and still young enough to have a sense of wonder, you would really enjoy this.  Since I am none of the above things, I was bored to tears.  The show essentially consisted of a series of skits, wherein some puppets (which are controlled from behind a scrim by long poles under the water) enter, thrash around vigorously, then exit, sometimes after a corny vaudeville slapstick ending, sometimes just exit. 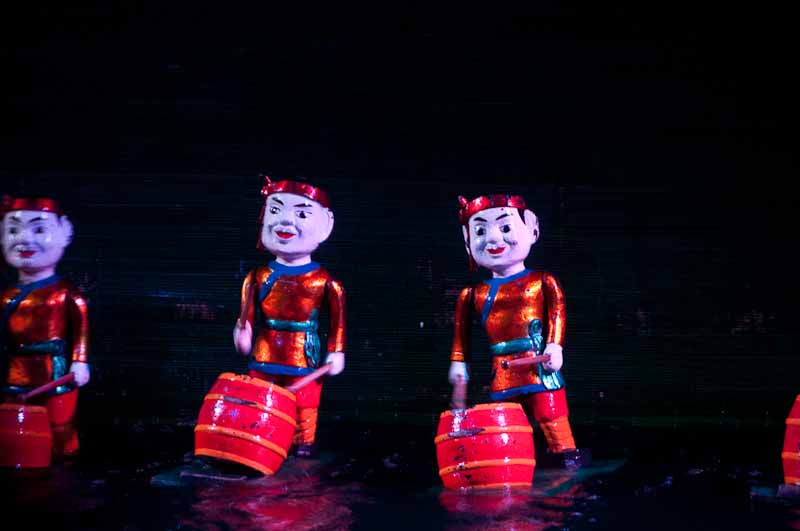 If you get the opportunity to see the water puppets, stay home and wash your hair. 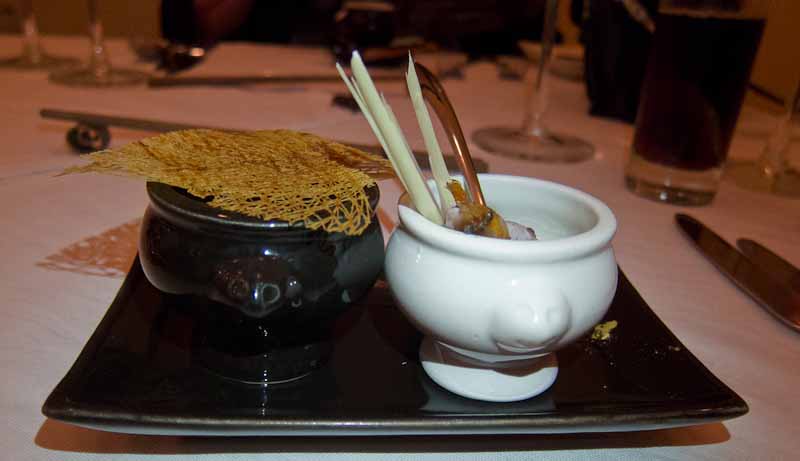 Gail ordered scallops, and was pretty concerned when a plate was placed in front of her that didn’t look at all like scallops.  Strange faces were made, and then the waiter came back, said he was sorry, picked up her strange plate and put the scallops down instead.

Great was the relief, until the waiter put the strange plate down in front of me, and hysteria broke out.  But it was fine, it was just my bass wrapped in banana leaf, which I enjoyed.

The hotel has pretty well covered itself in tiny white lights for the Christmas Season, and many people are coming by to take pictures.  I liked this one:

Early to bed tonight, early to rise tomorrow.  We have to have bags outside the door by 7 am for a long bus ride to Ha Long Bay.  We spend tomorrow night on a junk (except it’s completely refitted to be a luxury (?) junk), then Thursday head direct to the airport for the flight to Cambodia.