Originally typed a couple of days ago, I’m finally getting this posted:

I was never one for being regimented, so I was less than amused this morning when we got a 6:15 wakeup call—I didn’t put in the call, our tour director did.  Thanks, Dad.

But we got up, showered and packed and had our bags outside the door by 7:00.  Went down to breakfast and were on the bus by 8, just like the good little sheep we are.

Had to start out so early because it’s a 4 hour drive to Ha Long bay.  They said it’s 160 kilometers (100 miles), but the traffic is so heavy and the roads are so bad it takes that long.

One stop on the trip—to what was supposedly a rehab center for Agent Orange victims, but I’m calling bullshit.  Although there was a wheelchair conspicuously placed by the front door, everyone we saw was hale and hearty. The front room was full of young people, mostly women, furiously needle pointing garish works of “art”.  I noticed that most of them had their cell phones on their workspace and there was texting going on between the stitches.

The rest of the quite large store was given over to clothing, jewelry, chotchkies, knick-knacks, bric-a-brac and general tourist junk.  There was a horde of young people (everyone here is young—I think all Vietnamese are about 23 years old), nicely dressed in black suits selling, wrapping and assisting.  All in black, that is, except the one woman who was 8.86 months pregnant who could no longer fit into the uniform.  This was a thriving business, and I strongly doubt It has anything to do with Agent Orange.

Back on the bus, we motored to Ha Long Bay, a very large body of water filled with 900+ stunning, craggy limestone islands, 2 of which are habitable.  We transferred to a junk, which sounds romantic until you notice that there are 500 junks, each outfitted as a floating hotel, filling the bay.  This is a huge industry, taking tourists by the tens of thousands out for an overnight trip.

Junks. Lots and lots of junks. And everyone of them a floating hotel.

Nonetheless, our junk turned out to be a pretty nice boat; our cabin is tiny but well appointed with a lovely marble bathroom, a bed that just about fills the room, a mini-bar and a safe.  I’m not the kind of guy who needs to put his wallet in the safe to go to dinner, but apparently plenty of people do, and this boat accommodates them.

Our room was tiny but pleasant. 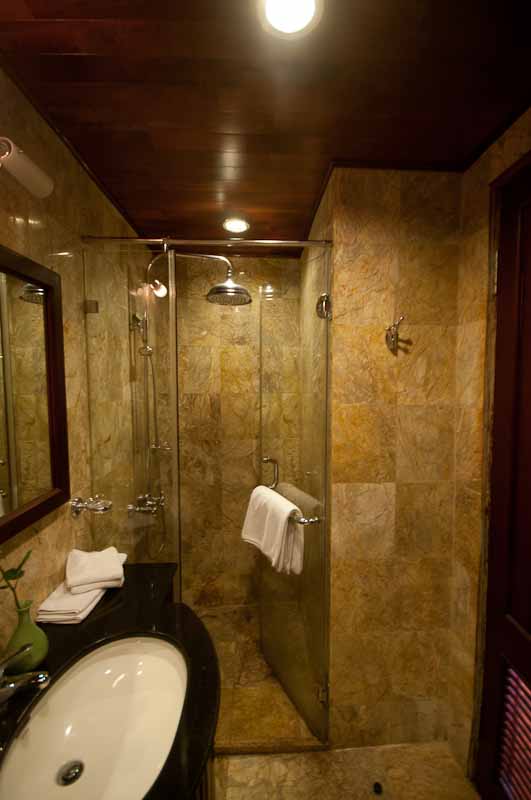 A cruise always starts out with a safety briefing.  We were instructed where the exits were, what to do in case of fire, and where to find the important safety equipment in our room: the fire extinguisher, the life vests, the hammer.   Yes, the hammer.  With which to break the window and escape.  It was next to the flashlight, so you could watch yourself drown, I guess.

We had lunch, then motored to a tiny island where some went swimming and others hiked 450 steps to the top of the island and enjoyed a spectacular view and then walked 450 steps back down.  I was not part of that “some”.

Not letting any seaweed grow under our keel, we then motored to another island where there is a  floating village—about 600 people live, fish and die on their boats, rarely setting foot on dry land.  The locals lined up their sampans and took us for a row around the village, which was all very interesting but seemed so artificial and constructed it was like a Disney Village.  I kept thinking that there was a modern apartment complex on the back of the island and they all go there at the end of the day and watch TV and play video games until it is time to come back to work In the morning.  Maybe not.

When we pulled into the floating village, we were met by the local Safeway store:

These women make a living selling to the tourists on the endless stream of tour boats.  Some of them put their little kids to work, too:

Who could say not to this cutie? Besides me?

Dinner on board the boat was an adequate buffet, followed by a showing of  an episode from the British car show Top Gear,  where three goofballs have to drive beat up scooters from Saigon to Ha Long.  It was farcical but appropriate to the moment.  Now I’m sitting on the top deck of the boat typing.  No internet here so this will get posted tomorrow night, but it sure is a heavenly place to write.

The next morning, there was a Tai Chi class at 7 am on deck.  The good thing about not having anything to do in the evening is that you go to sleep early, and then get up early, so I was already up and thought I’d give it a try.  We’ve all seen photos of people in China doing their morning Tai Chi, slowly and gracefully moving and stretching and breathing in a form of exercise that seems effective for a long life, isn’t exceptionally energetic and won’t lead to injuries.

So a young crewman came onto the top deck, and we began.  Breathe in, breathe out.  So far, I’m a champ.  Move, slowly and smoothly. I can do this.  I like this. Another step, another stretch.  I think I’m in love with this.  I feel great, not covered in sweat and not headed for the emergency room.

Mike and Linda gave it a try, too.  I think Mike is going to open a little Tai Chi parlor in Alamo soon. 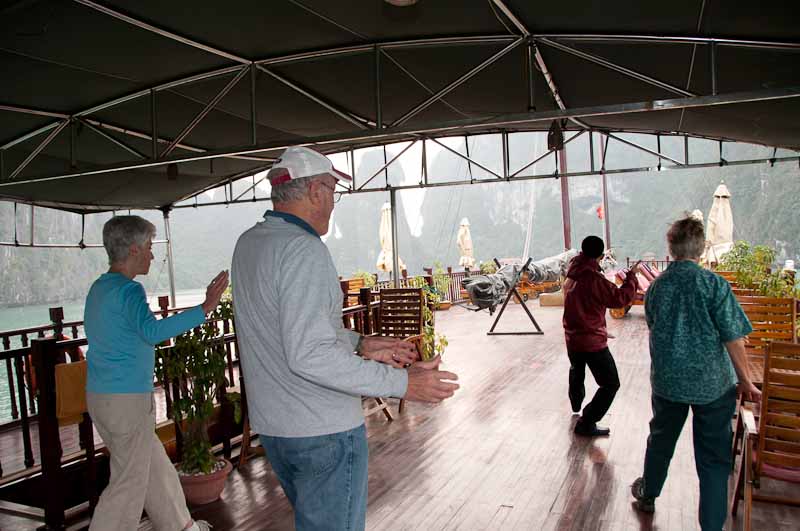 Linda was a natural, Mike is still getting the hang of it.

I forgot to put in the great morning photos:

We sailed into another Potemkin village of supposed fishermen (who had a dock with hundreds of kayaks at the ready to rent out to the tourists) so the energetic people could take the tender ashore on another of the vertical limestone crags called islands, climb a hundred steps up and visit a cave.  I took a shower.

Then breakfast, pack up and motor back to the starting point.  Another long drive back to Hanoi, this time to the airport and our flight to Siem Reap, Cambodia.

I would hate a long bus ride to, say, Turlock.  But wandering through the countryside in another nation is always interesting.  I looked at enough signs to start deciphering the language, figuring out that   ôtô  is the word for automobile.  I wondered about their style of architecture, where they live in what are called “skinny houses”–even in the rural areas, most of the houses are only 10 or 12 feet wide, 75 or 80 feet deep and 4 stories tall, with few or no windows on the sides.  They don’t look comfortable or convenient, but they hold 2 or 3 or even 4 generations of a family and don’t waste any ground space that could be cultivated.

There are so many motorbikes and so few cars because there is a 200% import duty on new cars.

There are no McDonalds, or Starbucks, or Home Depot.  There are no large stores at all, as far as I have seen.  Everything must be purchased from a small specialty business, usually run from the narrow ground floor of a skinny house.

Our guides had been very concerned with making sure nobody tried to carry liquids through security. Hah.  Security at Hanoi Airport is a joke–drop your bags on the conveyor, don’t worry about your shoes or your laptop or your belt, just walk through the metal detector (which may or may not be turned on), pick everything up and keep moving.  The girl supposedly watching the x-ray machine was texting, not paying attention to her very important job.  And yet, there have been neither hijackings nor bombings of Vietnamese airliners.  Maybe they’re just lucky……………

An hour and a half later, we were in Cambodia.  Read all about it soon.

One thought on “Ha Long Bay”