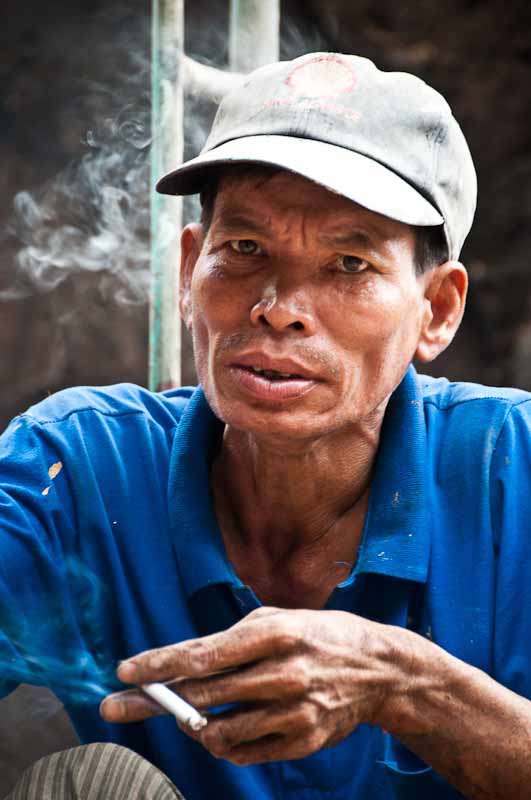 Saw this guy in a factory and liked the shot.

Sac De is a mid-sized burg somewhere along the Mekong on the way to Saigon.  We parked there overnight and took a tour in the morning. 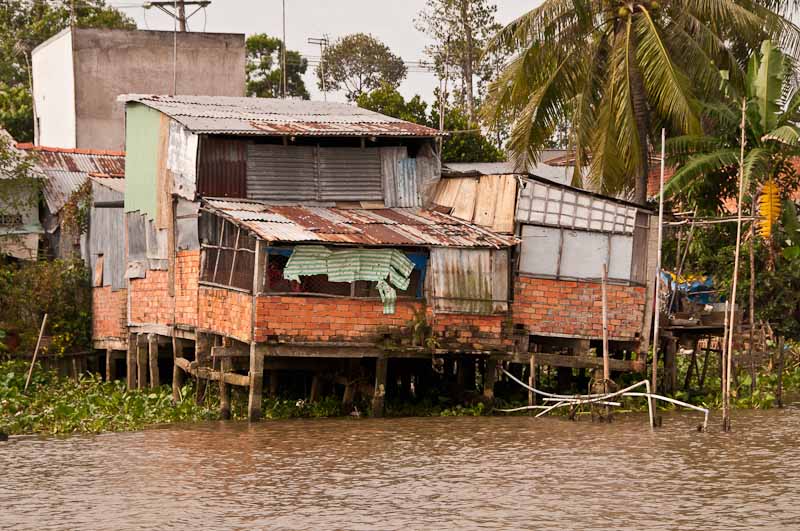 A tumbledown house alongside the river. Note the brick construction--this is brick city, Vietnam.

Our first stop was a brick factory.  This place has a bunch of them, cheek by jowl along the river, from whence comes the right kind of clay to make either bricks or floor tiles. 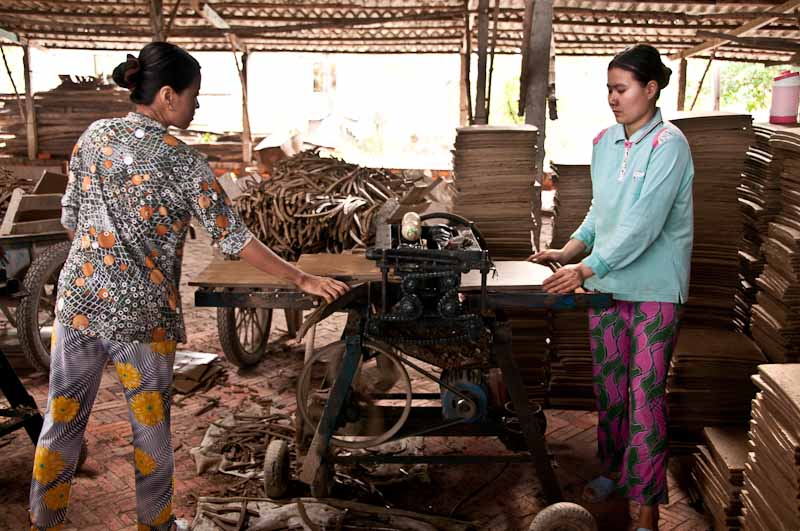 Women operating a machine that trims the clay squares to the right size for flooring tiles.

When labor is cheap, industrialization lags.  Labor is very cheap here, and consequently the machines are ancient and the work process relies on lots of hand labor.  One thing I notice is that feminism reached here a long time ago–women and men do the same work side by side, with no apparent deference to the “weaker” sex.  Barges are toted, bales are lifted, by men and women alike.  Both work long and hard in the fields or factories.

We’ve stopped in plenty of little town markets this trip, but the market in Sac De was larger and more extensive than the rest.  I couldn’t bring myself to photograph the woman slaughtering chickens and ducks right on the sidewalk; my chickens at home would never forgive me.  But we saw her, and the (mostly) women selling all kinds of meats, seafoods, poultry both alive and dead, fruits and vegetables.  Western standards of refrigeration and hygiene are clearly unknown here, but the people seem to be surviving nicely.  Maybe we worry too much. 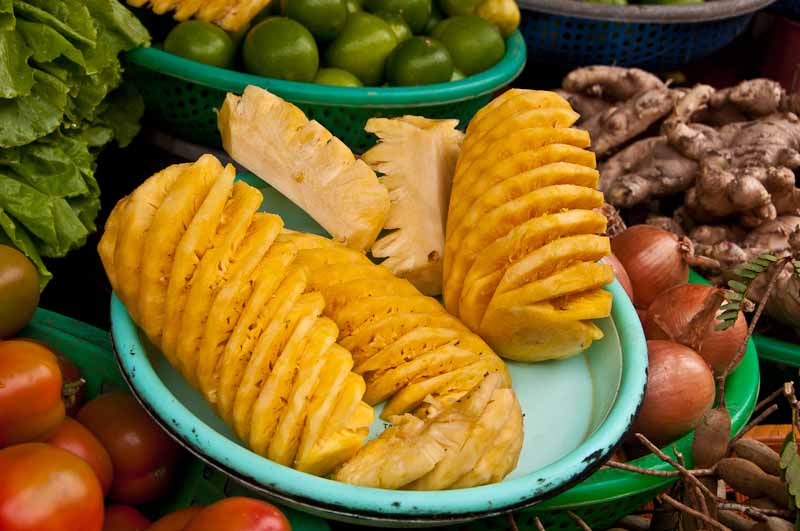 Not only are the pineapples sweet, they cut them pretty cool, too.

If you are a fan of a certain kind of French literature, you perhaps have read “The Lover”, described on Amazon as:

An international best-seller with more than one million copies in print and a winner of France’s Prix Goncourt, The Lover has been acclaimed by critics all over the world since its first publication in 1984.

Set in the prewar Indochina of Marguerite Duras’s childhood, this is the haunting tale of a tumultuous affair between an adolescent French girl and her Chinese lover. In spare yet luminous prose, Duras evokes life on the margins of Saigon in the waning days of France’s colonial empire, and its representation in the passionate relationship between two unforgettable outcasts.

Our ship, La Marguerite,  took its name from her, as well as the interior decor.  So we went to see her house: 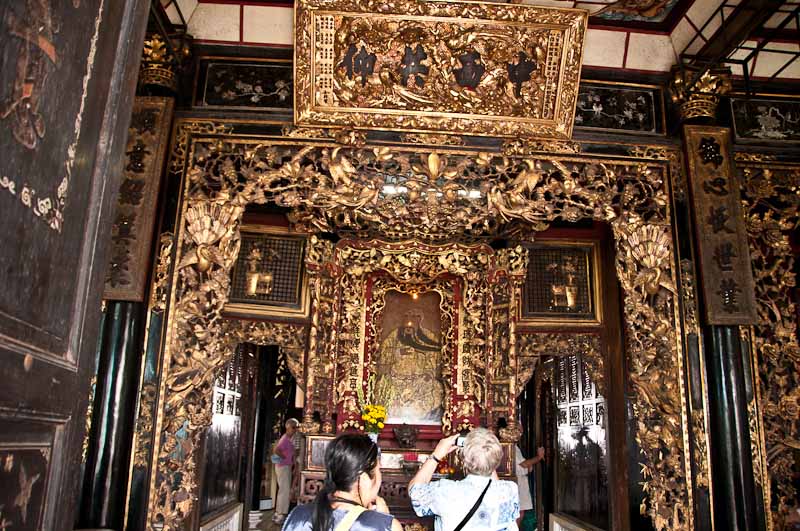 The ornate interior. They gave us tea and ginger candy, I don't know why.

There was a movie made from the book, starring Jane March, and they distributed DVDs on the ship.   Linda Bandler said it was pretty pornographic; I didn’t watch it.  Yet.

Then we stopped at the Catholic Church in town–the outside is pretty regular:

Just your basic French mini-cathedral in the middle of south-east Asia.

The inside, though, was something special.  Enough neon to light a casino, which seems sort of out of place.  I thought the neon halo was a particularly outré  touch. 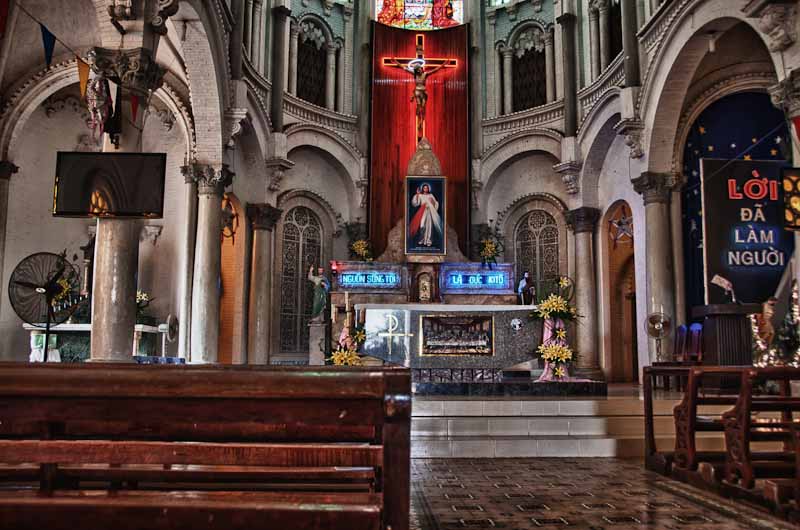 I think this place uses half the electricity of the entire town.

Then it was back to the ship, farewell dinner with the requisite Baked Alaska, get to bed early because bags had to be packed and outside the door by 7:00 am.  The trip is winding down and we’re getting tired, as if there was such a thing as too much vacation.

Three for the price of one.