I really wanted to title this “Saigon.  Shit.”, the opening line from Apocalypse Now, but not only does it seem tacky, but Saigon turns out to be a hell of a city and I don’t have anything to gripe about.

We had to have our luggage out of the cabin at 7 this morning, and they threw us off the boat entirely at 8:15.  Which wouldn’t be so bad, except that we couldn’t get into the hotel until after 2, so we had a lot of time wasting to do.  Since the tour company does this every week,  they know just how to dawdle, dilly-dally, idle and otherwise make spending 6 hours doing nothing seem productive.

First, there was a 90 minute drive into the city center.  Even though we were on a new highway, so new that the toll booths aren’t yet completed, where the myriad of Vietnamese motor scooters are prohibited, the top speed is only 60 and even that is rarely achieved.

Tet, the Vietnamese lunar new year, is almost upon us; it arrives January 23.  We drove through the huge and bustling Chinatown where many of the stores are completely given over to vending new year’s decorations, then stopped at a large Buddhist temple, where hordes of people were making their new years ablutions and sacrifices.

Everyone seems to start the process by lighting a bundle of incense sticks.

The temple is ready for the new year.

People bring food to sacrifice/please the gods/provide for their own ancestors/look cool in front of the neighbors. All I know for certain is that there's a real feast here; I hope it isn't going to waste.

We clearly picked just the right time to visit–there was much happening and it was all interesting.

Then lunch.  A restaurant called, creatively, Indochine.  Pretty interesting food–I even think I ate mushrooms, but if so they weren’t anything like the ones I abhor back home.  I tried pomelo, which is like a giant grapefruit but sweeter, less bitter and all around better.  We spent about 40 minutes too long at lunch, but I think that was part of the plan to keep us occupied.

Then yet another factory tour–this time of a lacquer factory.  There was only a small amount of work space, and a very large sales room.  The real production must happen elsewhere, but what we saw was intriguing.  And the product was very good, if not exactly the sort of thing we want to have in the house.

Gail did see one item she liked–a wonderful chest of drawers with a Picasso-like embellishment.  If we didn’t think that the shipping would cost as much as the chest, we might well have taken it home. 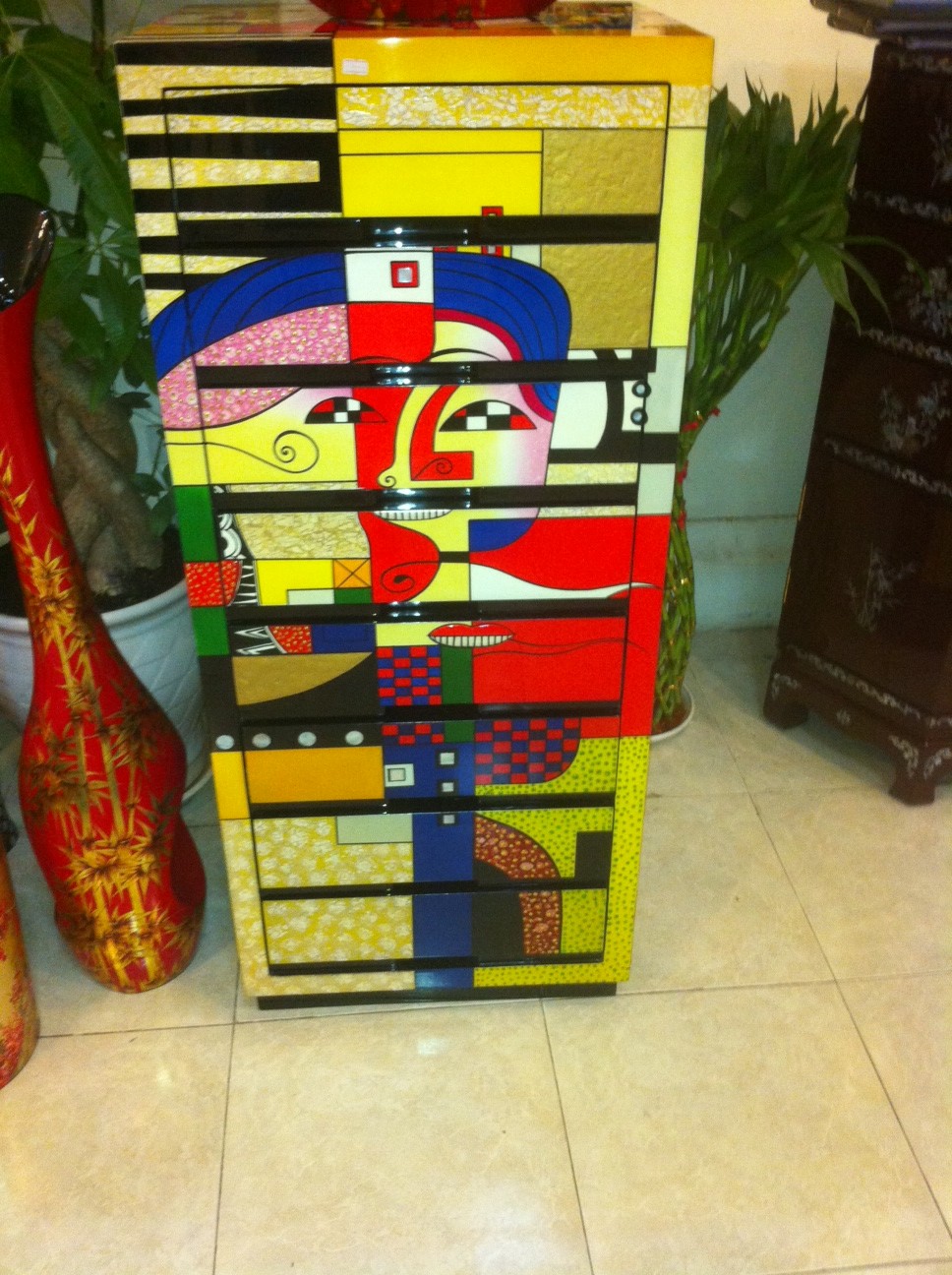 Not only beautifully designed, but the execution was brilliant. Photo by Gail.

Finally, thankfully, wearily, we arrived at the Saigon Sofitel. This is a beautiful, modern big-city, 5 star hotel, and they have one of the most interesting Christmas trees I’ve ever seen–it’s composed of birdcages, which are holding ornaments.  Even a bah-humbug grouch like me can appreciate this:

About as non-tacky as a Christmas tree can get.

It’s Monday evening, and we don’t fly home until Thursday at midnight, but I think we’ll be able to stay interested and occupied.  Saigon is a huge, booming city, bursting at the seams with business and opportunity.  There are at least 9 million people here, and 5 million motorscooters.

We had dinner tonight at an Italian restaurant,La Hostaria,  and it was just excellent, except for Gail’s so-called Caesar salad, which just wasn’t very Caesar-y.  Don had a pizza as an appetizer.  Micky turned the cruet of oil upside down to see if the spices on the bottom would move–they didn’t, but the oil poured out just fine.  Gail asked for “another glass”, meaning wine, and they brought her another glass.  No wine, just a glass. 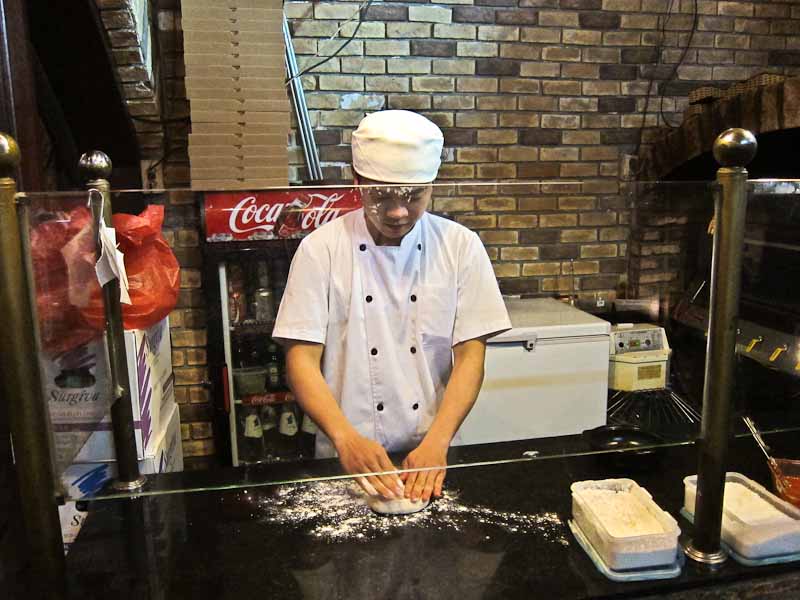 Proof that a pizzaiolo (pizza cook) doesn't need to be Italian.

Why do I have to get up earlier on vacation than I do when I’m at home?  We have to meet the guide tomorrow at 8:00 for a trip to see the Viet Cong tunnels, so I’m going to bed.  I guess I’ll get to sleep in when I get home.