History is written by the victors

This is the unhappy post about Vietnam.  If you don’t like reading hard things, or seeing difficult photos, better skip it.  I hate to have to include it, but I can hardly write an honest review of the trip and leave out the most important stop.  Gail says it is the most painful place she’s ever been.

We went to the War Remnants Museum, devoted to excoriating the US for the events of the last war.  There were helicopters and airplanes in front, that we forgot to take with us when we left, but we were in kind of a hurry back in 1975.

This is a museum full of propaganda, no doubt about it.  Vietnam won the war, and they have every intention of telling the story from their point of view.  The entire South Vietnamese government is glossed over as a “puppet regime” of the west, utterly lacking in validity.  The Vietnamese army, what we called the Viet Cong, were apparently all angels, we were  all devils.  The truth, as always, is somewhere in the middle. See this museum just to be aware of all the things you’ll never see/hear at home.

The museum is crowded, and essentially every face is white.  Not just Americans, but visitors from Europe and Latin America, crowd through to see war from another point of view.  The point of view of the winners. 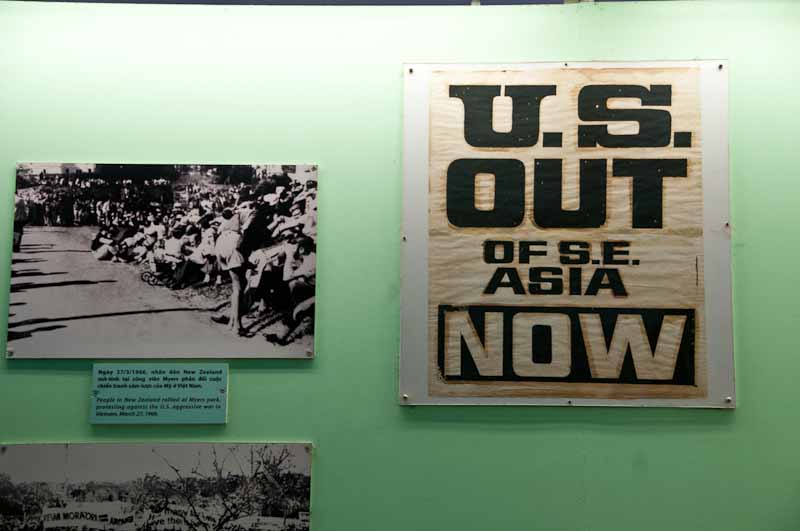 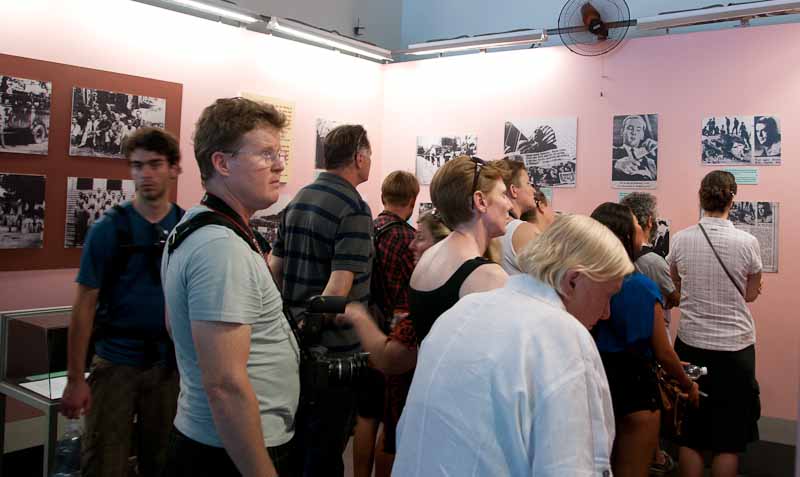 It isn't pleasant, but it's sure popular.

There is plenty of source material to show that the war was not popular in the US, and the museum makes the  most of it. 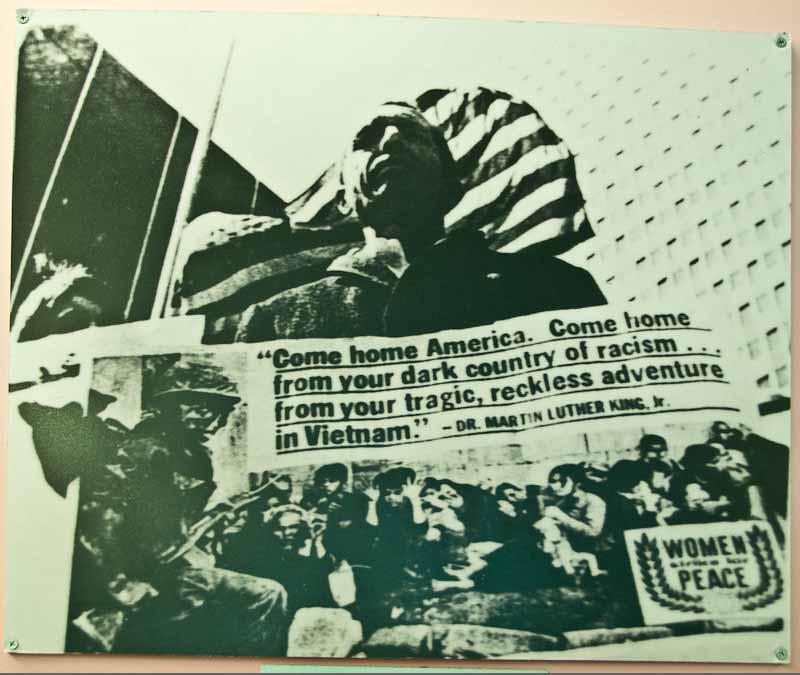 A quote I'd never seen from Dr. King.

Even McNamara changed his view over time. 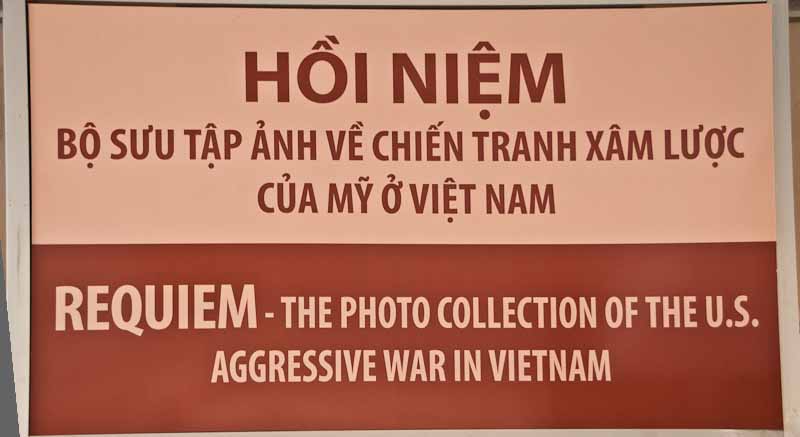 One entire all is devoted to a collection of war photography.

If “U.S. Aggressive War in Vietnam” seems harsh, remember that there are still people in the south who call the civil war the “war of northern aggression”.

A warm portrait of a mother and her baby deformed by agent orange.

The intensity ramps up. 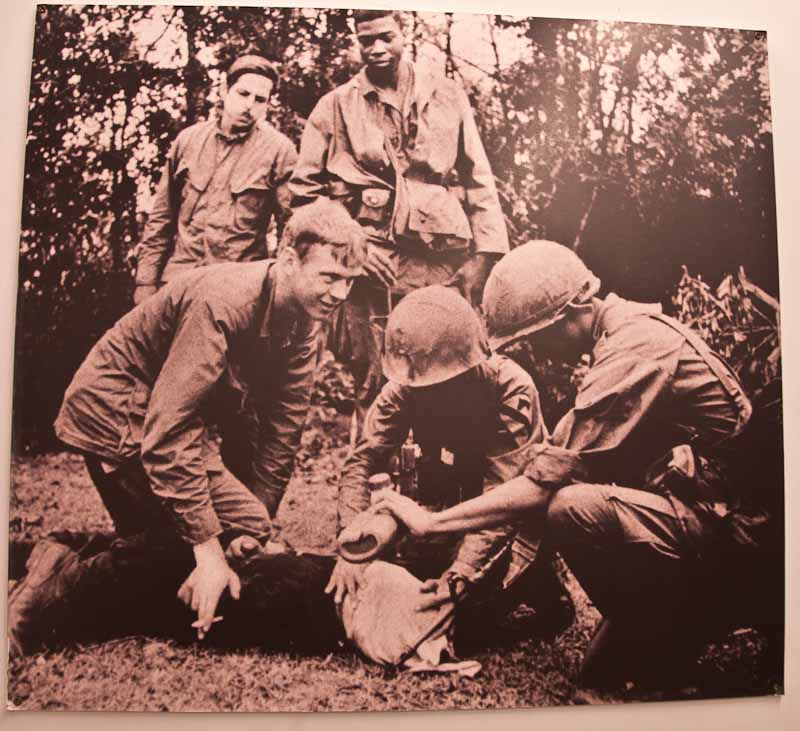 Our government call this "enhanced interrogation" these days

Another way of describing it.

Bob Kerrey, a Medal of Honor winner, later both Governor and Senator of Nebraska, gets more than a passing mention: 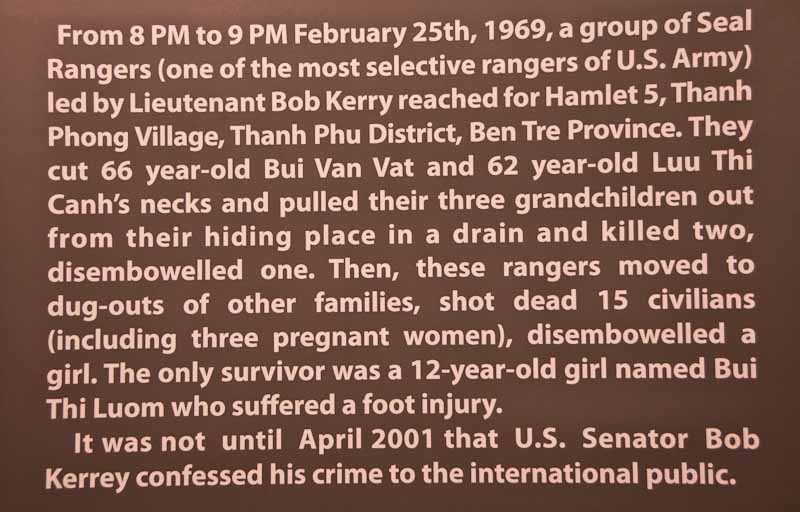 A description of a raid led by Senator Bob Kerrey

The wikipedia entry regarding the episode:

In 2001, the New York Times Magazine and 60 Minutes II carried reports on an incident that occurred during Kerrey’s Vietnam War service. On February 25, 1969, he led a Swift Boat raid on the isolated peasant village of Thanh Phong, Vietnam, targeting a Viet Cong leader that intelligence suggested would be present. The village was considered part of a free-fire zone by the U.S. military.

Kerrey’s SEAL team first encountered a peasant house, or hooch, and killed the people inside with knives. While Kerrey says he did not go inside the hooch and did not participate in the killings, another member of the team, Gerhard Klann, said that the people killed there were an elderly man and woman and three children under 12, and that Kerrey helped kill the man. Despite the differing recollections about who actually stabbed these people, Kerrey accepts responsibility as the team leader for their deaths: “Standard operating procedure was to dispose of the people we made contact with,” he told the New York Times Magazine.[6] Later, according to Kerrey, the team was shot at from the village and returned fire, only to find after the battle that all the dead were women and children, clustered together in the center of the village. “The thing that I will remember until the day I die is walking in and finding, I don’t know, 14 or so, I don’t even know what the number was, women and children who were dead,” Kerrey said in 1998. “I was expecting to find Vietcong soldiers with weapons, dead. Instead I found women and children.”[6] Klann, and a Vietnamese woman, Pham Tri Lanh, who says she witnessed the assault, gave a different account, saying that the SEALs rounded up the inhabitants of the village and shot them.

Regardless of what actually occurred that night, Kerrey expressed anguish and guilt over the incident:

Kerrey was awarded a Bronze Star for the raid on Thanh Phong. The citation for the medal reads, “The net result of his patrol was 21 Viet Cong killed, two hooches destroyed and two enemy weapons captured.”

Maybe you shouldn't say this if you can't do it. 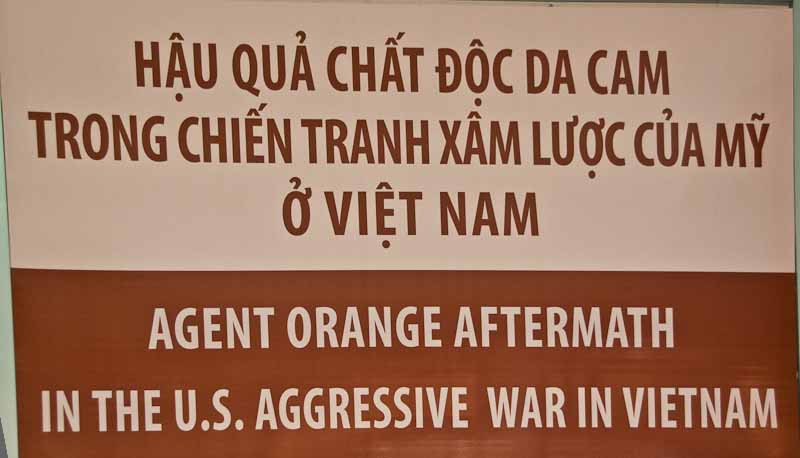 This exhibition room is very hard to look at, but you won't read much about it at home.

The entire room is full of photos of people damaged by agent orange.  People who were doused in it and their deformed children.  We don’t see many deformed people here; nobody dropped any chemicals on us.  We can fix many of these things if they happen.  Maybe prenatal testing leads to abortions of the children who would be like this.  Maybe I’m rambling.  But seeing this room is heart-rending, painful, disconcerting and causes one to seriously question our behavior before, during and after the Vietnam war.  After a long struggle, many US veterans were compensated for being harmed by Agent Orange–the Vietnamese have not been.  They seem to have noticed that disparity. 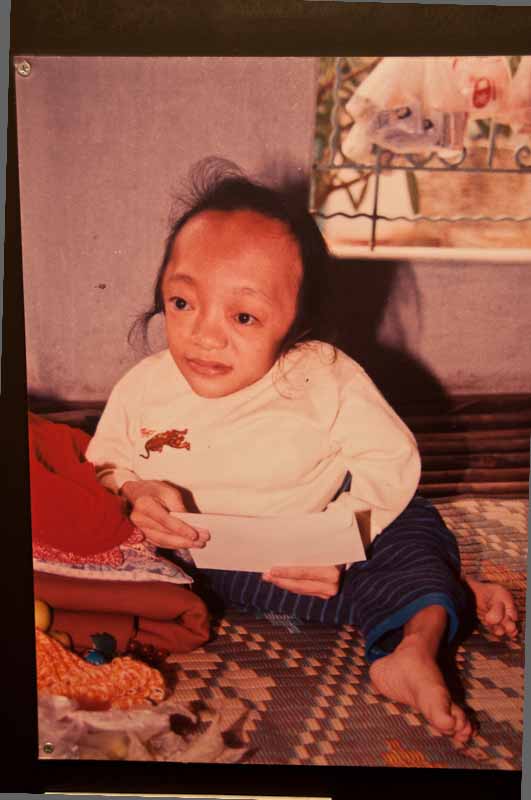 One of the victims.

Gail couldn’t take the entire room; she had to leave.  The pictures made her question the entire development of civilization, as if the killing fields of Cambodia had not shaken her faith in man sufficiently.  Not just he US. Not just Cambodia. All of mankind seems to be incapable of civility and decency.  Man’s capacity for cruelty, avarice and evil is infinite, no matter how much we try to pretend otherwise, and we need museums like this to remind us of the fact.

To say that one “enjoyed’ the War Remnants Museum would be wrong, there is nothing enjoyable in that much pain.  I’m glad we went, though.  Even for all the propaganda, I think that there is something important to be seen and understood, and there is no point or purpose in taking the Pollyanna view of “American Exceptionalism” and pretending that the US is always right.  I hope we are strong and mature enough to admit our flaws and work to improve.

One thought on “History is written by the victors”