The reason for this trip, beyond the general riotousness of seeing Susan and Karl, was for me to attend Rick Sammon’s Digital Delray Days, a workshop he offered to improve my photograpy.  Okay, he didn’t offer it just for me, but that’s the way it felt. 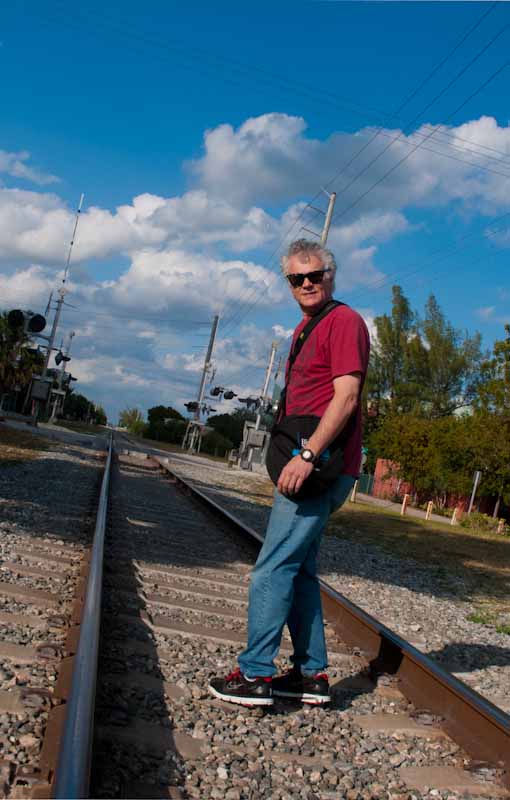 Digital Delray Days is held, as one might guess, in Delray, Florida, a city about 180 miles SSE of Orlando between Boca Raton and Palm Beach. The facility is the Colony Hotel, a 1920’s establishment that still retains the old flavor and is extraordinarily photogenic.

There were 8 of us in the class, ranging from real photographers through serious hobbists, poseurs, diletantes, and a couple of doctors who had more money than skill–great equipment that they didn’t really know how to operate.  We all had a great time.

A fine looking bunch of shutterbugs. The little cheap tripod on the left is mine.

In another example of how everything is relative, I’m accustomed to people thinking I have a lot of really great photo equipment, which may be true in the greater world, but in this class I was the poor kid.  My $70 tripod didn’t look good next to the $500 version everyone else had, and I don’t shoot with (or need) the $5000 professional version of the camera body.  We all brought laptops for the image processing part of the class, but one guy doesn’t like the screen on his so he brought a 21″ monitor as well.  I didn’t even know you could buy a $300 programmable remote control for your camera, but one guy had it and others knew all about it and were debating ownership.

We started out working on HDR photography.  This is a technique where you take multiple photos of a subject at different exposures and combine the photos in the computer to see the most of both the highlights and the shadows.  It has become very popular in the last few years, as the software to create the finished product has improved.

We were working with a local model in the ballroom of the hotel, with bright Florida sun coming in the windows and dark shadows on the floors and in the corners, and had to balance all the light to make it all visible and show off the model as well.

Here is a “before” shot of the room:

The middle of the 7 different exposures I made.

I had the model posing like Cinderella coming home from the dance, thinking about the great guy she had met.  The camera takes 7 exposures in a row, slowly increasing the exposure from 3 stops below to 3 stops above the “correct” one. Then you download everything to the computer and process it in HDR software, and you get a photo like this:

The final product. Interesting, but I still have a lot to learn.

Another example, this time outside. We went on a photo walk, and this was the little train station in Delray: 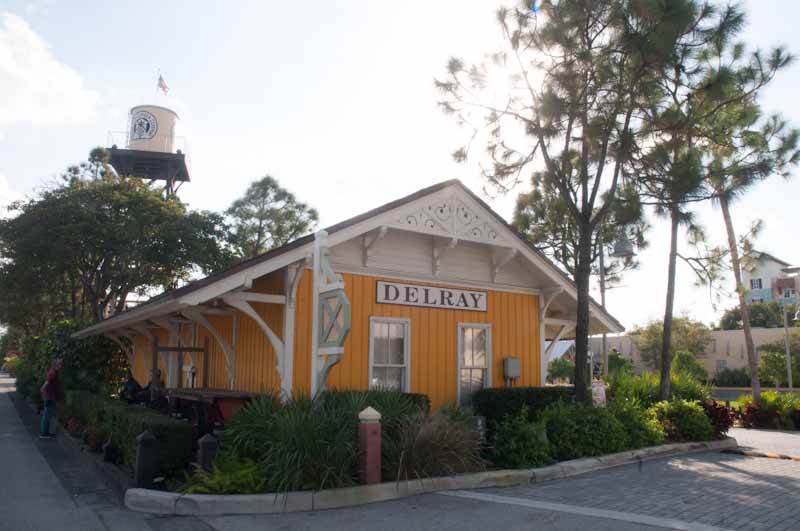 Back side in shadow, the high sun overhead seriously overexposed. A boring shot. 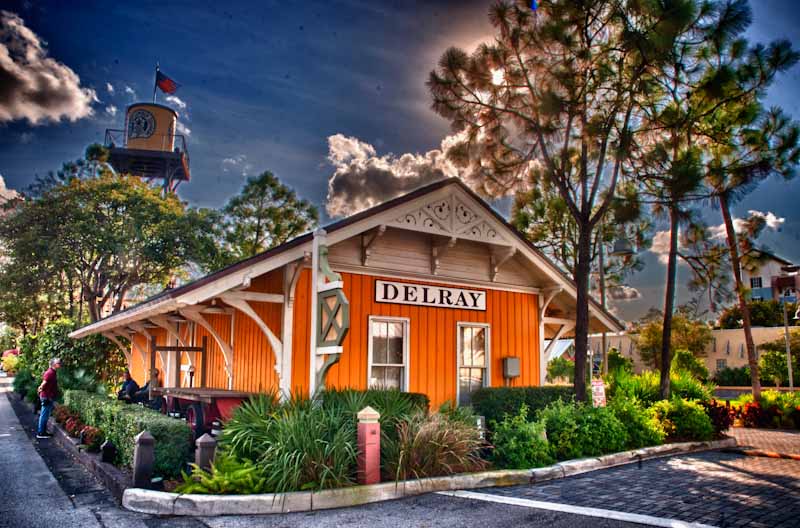 HDR is easy to overdo, as you notice above, but many people like the look.  It’s kind of fun to make a blah scene come alive with color that isn’t real; I took the class to learn how to do it with finesse and grace.  A few hundred more tries and I’ll have it down, I hope.

See on the above shot that Rick is talking to a couple of guys?  They were “local color”, to say the least.  A pair of homeless winos, he was asking if they would mind if we took some photos of them.  Street shooting is Rick’s forté, and talking to people to get photos is one of the things I went there to learn.  These guys said yes.

They were Butch and Johnny O, a pair of “brothers of the street”, together for years watching each others back, hanging out together, going to jail together, fighting the vicissitudes of the street life and sticking together like an old married couple.

Brothers of the street 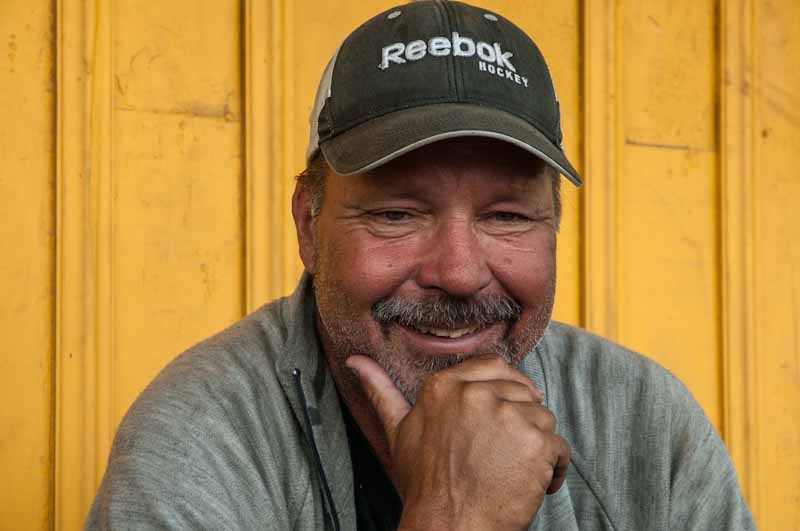 Johnny O--the more thoughtful and serious of the pair.

Johnny O. An interesting way to fold his hands.

Not a bad outdoor portrait==and his shirt says it all about him. 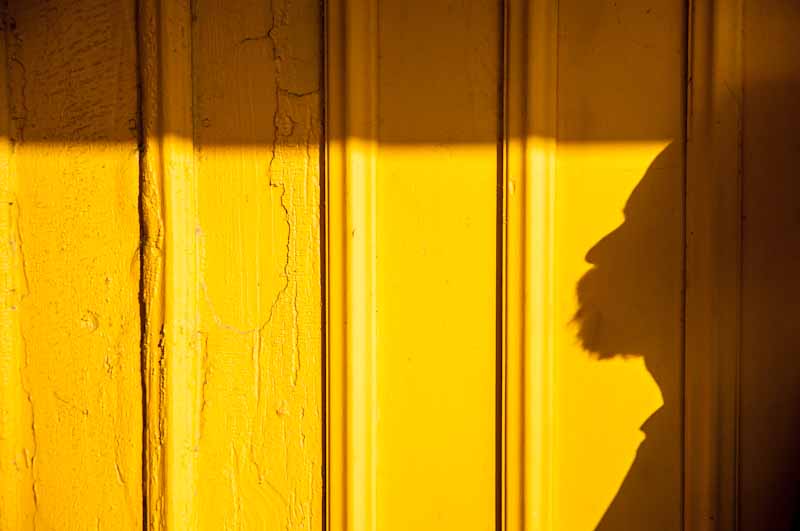 Getting artistic. Thinking about how to make interesting images in non-standard ways is a big part of the education.

Walking back to the hotel down the main street of Delray, I saw a man and his dog and decided to try just walking up and talking to them and taking a photo–something I’m pretty averse to doing in general.  I think it went pretty well:

I’m going to end this very long post with my best shot of the day–which was also the best student shot of the day, so I feel validated and proud and puffed up.  The trip was a complete success.  The class was wonderful, and I may well be back next year.

We had a few minutes at the end of the morning session before the model went home, so we were all trying to get a great shot of her in front of a large mirror in the ballroom.  I’m very proud of this one:

Chelsea, our talented and beautiful model.

Thanks to Rick and Susan Sammon, Chelsea and all my classmates for a great day.