The art of giving

An artist named Ken Hepurn made the gate at the top of our driveway.  And the gates on the walkway.  And the “totem” in the front yard.  We wanted him to make us a mailbox, but he had sold out to corporate America and was designing for The Gap, so we had someone else make a knockoff of his style.

Then he went into the custom door business, and he made our front door.  You could say we are big Ken Hepburn fans.

Now he is on to another adventure–he has started a web company called givigiv.com, which is in the business of facilitating gift giving by offering the ability to send drinks and appetizers at popular restaurants to someone via their smart phone. Your recipient gets an email which contains a link to the gift certificate, then goes to the chosen bistro and shows the link to their server.  Two drinks and two appetizers coming up, no charge.

This is an easy gift–it fits everyone, it should offend nobody.  No shopping, no wondering, just a few clicks and your social or business obligation is taken care of.  The restaurant gets a new customer, who will likely order more than just the first round of drinks, possibly dinner. Everyone is happy.

At least, that’s the plan.  The world is full of internet start-ups, some get rich, some sink without a trace.  We’re hoping our friend is in the former group.

Ken has this business going in the LA area, and is moving towards SF.  He sent us a givigiv test for a place called Serpentine in the city, so tonight we went and tried out both the system and the restaurant.

Serpentine is not downtown, it’s in Dogpatch, an honest to God neighborhood, at 2495 3rd Street.  I think that’s the Potrero district.

The building is old and industrial, like the area.  Inside, things are pretty industrial as well, but I liked the decor.

We got there at opening time, so the place was empty. It didn't stay that way long.

I tried to make an Opentable reservation, but they were booked, so we just walked in at the stroke of 6, when they open.  I could see that they had a ton of reservations on the screen, but they shoehorned us in anyway.

A tiny table, a chair out into the aisle for the big boy. The cute redhead is grand-daughter Tessa.

When we got a waitress, I showed her the givigiv certificate on my iPhone, but she had no idea of what I was talking about.  Her manager came over and made it work, though.  We may have been the very first people in San Francisco to try this system out.

Gail had wine, Tessa the adored grand-daughter had a champagne cocktail, I had iced tea.  We had appetizers–olives, and pickled veggies.  Then, proving the concept, we ordered dinner. 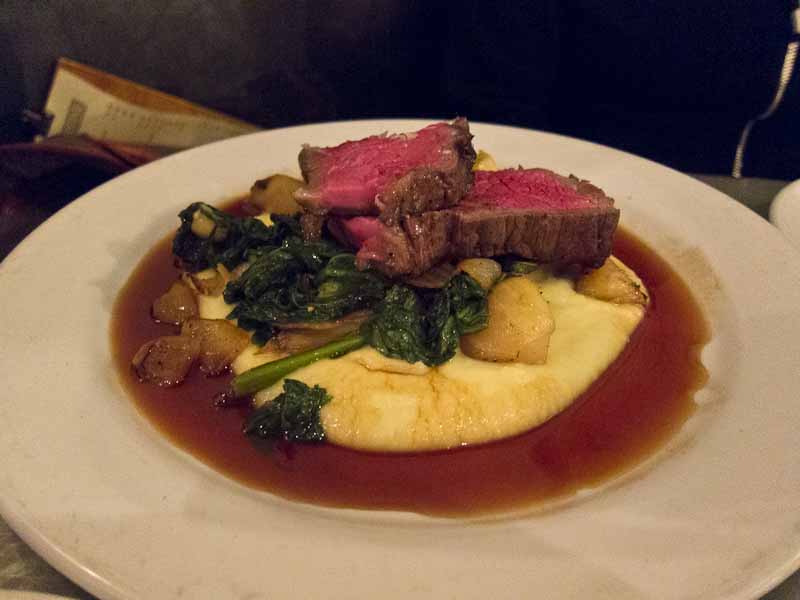 A seriously beautiful piece of steak.

Gail and Tessa split the steak, which was sitting on a bed of mashed potatoes and, and, and, we never figured out what else.  Some kind or root vegetable, maybe parsnips.  Whatever they were, they were gone before long.

I went for the seared ahi, which came perfectly cooked on a bed of Himalayan red rice with a green curry.  The rice was delicious, the curry was way on the hot side for a sissy like me.

The dessert card offered a lemon buttermilk pudding, and who could resist that? 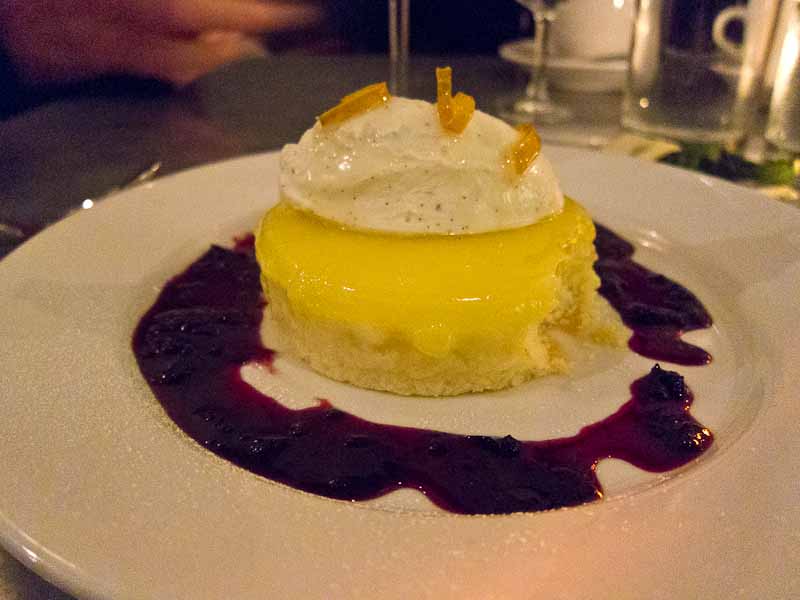 It was like having just the good stuff from the middle of a lemon meringue pie, with whipped cream on top.  I loved it.

So we had a double winner tonight—the givigiv concept worked; Ken sent us drinks and appetizers as easily as sending an email.  We ordered dinner, so the restaurant made out.  The meal was great, so we’re happy.  Everybody wins, but I won the most–that lemon dessert was one to remember.