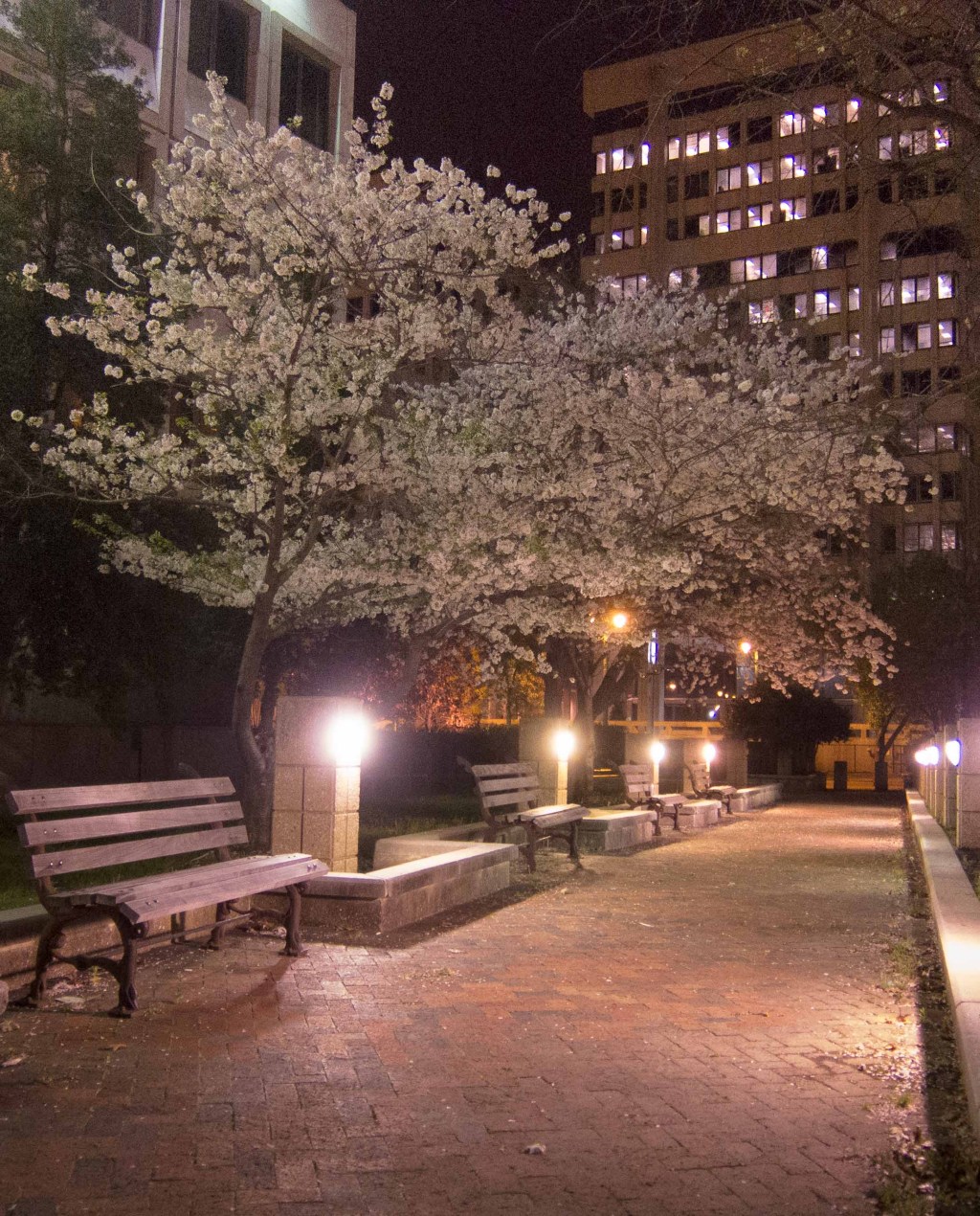 I think that there is still supposed to be snow around here this time of year, but the trees don't seem to know it. I was amazed at the birds singing at midnight, too.

Some time chickens, sometimes only feathers, as Uncle Guido the chicken thief used to say.

Mike and I had a very nice first round in the Silver Ribbon Pairs today, ending up just under 52%.  They score national events across many sections, in our case three sections, so our score was 511.88.  By some statistical miracle I can’t quite imagine, that obscure score managed to tie for 7/8/9.  There were THREE teams with 511.88?  The mind reels.

Joined by our old friend Srikanth, we had a decent but not fantastic dinner in the Peabody Hotel, where every day the official Peabody Duckmaster marches his flock of ducks down the elevator from the roof, into the main atrium and ensconces them in the pool, only to march them back out again every evening.  Been a Memphis tradition for 70 years or so.  The do it in the Peabody Hotel in Orlando, too.

Then the evening session.  We played pretty well.  I misdefended one hand, Mike made one silly bid.  Remember yesterday how lucky we were that the top seeded pro only got easy hands to play?  Just the opposite tonight, when Barry Harper, a pro from Regina, Saskatchewan picked up two devilishly difficult hands and made short, professional work of stripping all the matchpoints.  Somedays you get the bear, somedays the bear gets you.

So we didn’t qualify.  Again.  I’m getting tired of this, but at least we had a decent day in between.

After the game I went up to the President’s Suite for the Patron Member reception.  Gail and I were patron members for quite a few years, but we finally dropped it because we weren’t really getting even the meager benefits promised.  The Daily Bulletin that is supposed to be delivered the Patron’s room every morning never arrived.  The patron member express entry signs were not posted at the selling stations.  The patron member reception got worse and worse with cheaper and cheaper refreshments.  Patrons were clearly unimportant to management, although they cashed the checks promptly.  I think the league doesn’t really know what to do with or for the the patron member program, and is just letting it idle along without any particular care, except from the redoubtable Wendy Sullivan, the pride of Memphis and the ACBL.

When I expressed all this to new President Sharon Anderson, we had a nice talk about what the program is and what it might be, then she personally invited me to tonight’s reception.  I have to say that the buffet was a distinct improvement from the past.  There were perhaps 20 patron members present, along with the ACBL board and the usual hangers-on. (When Howard Piltch was president the suite was always open to the entire membership, but that was an attitude that seems to have gone by the boards.  It’s just the in-crowd these days, but as long as Don Mamula is my friend, I’m one of the in-crowd.  Life is who you know.)  I wouldn’t mind re-joining the Patron Members, but I’d have to see some serious improvement in both the listed benefits and their actual delivery.

Gail arrives tomorrow night, so Mike and I will play the Daylight Pairs (what used to be called the seniors), then the 3 of us can go out to dinner and Mike can hit the hay early for his flight home Wednesday.

Since I’m here, I think I’ll sound off about one of my pet gripes.  This is what the label on a board looks like to most of us: 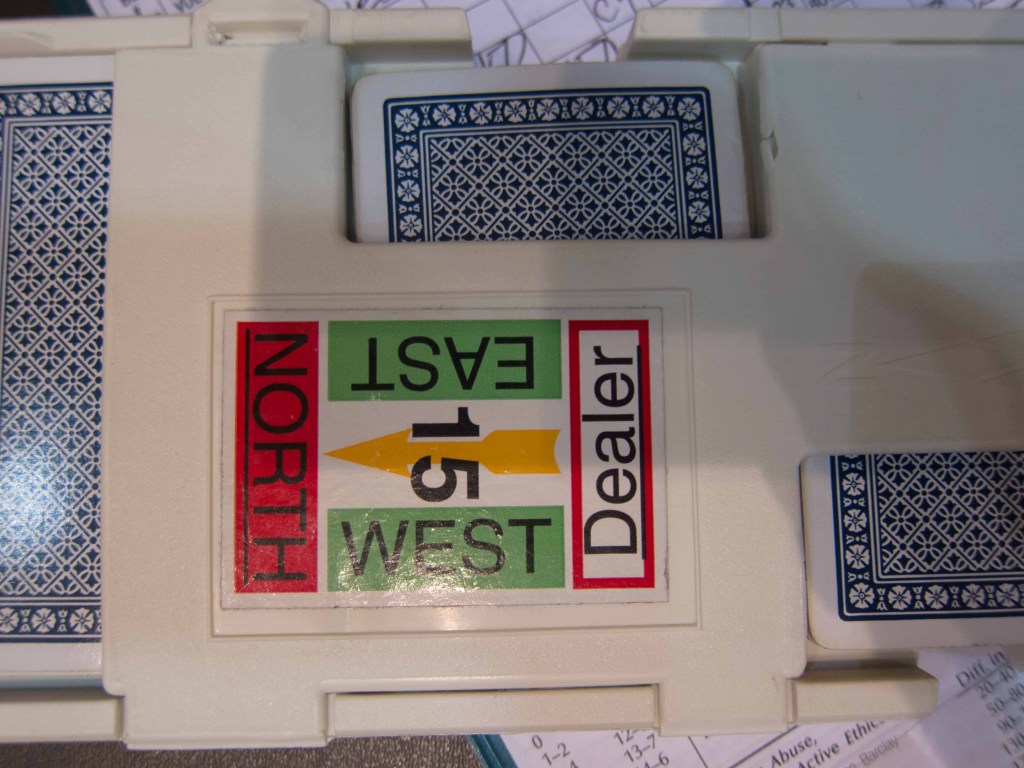 Your basic bridge board. The side in red is vulnerable, the side in green isn't.

However, 3 to 4% of men are color blind.  This is what the board looks like to them: 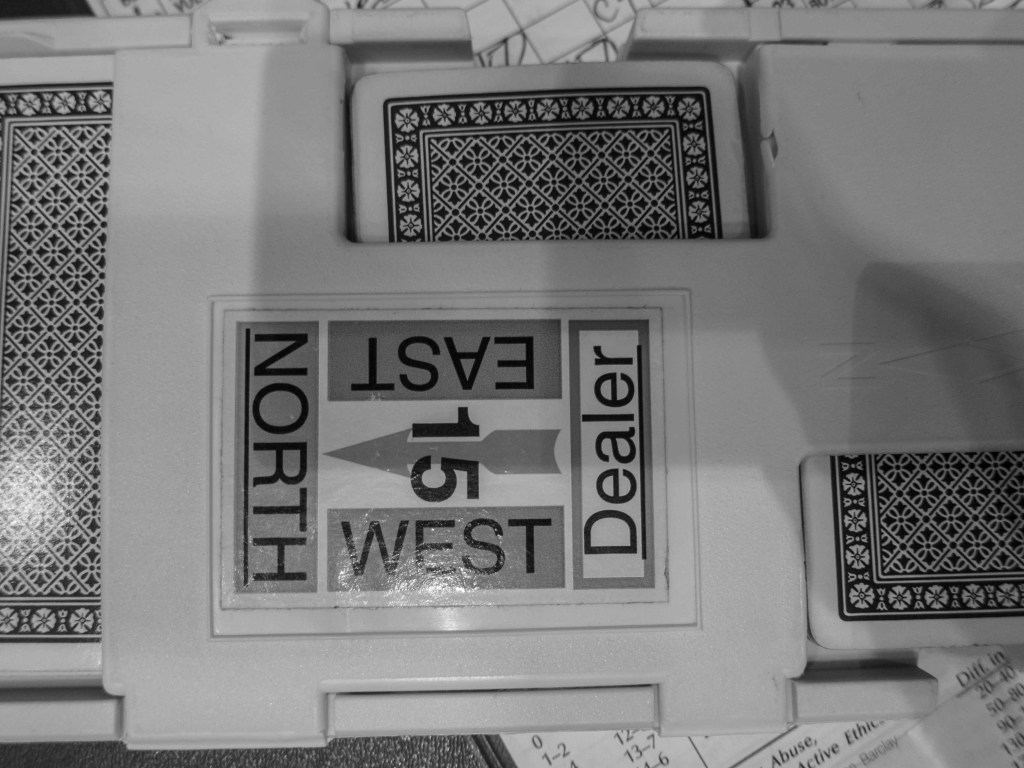 Now try to figure out the vulnerability.

Can’t they find a better way to label the boards?  Even this is easier than the boards with just a thin label down the middle.  I’m not color blind and I find them hard to figure out.  Surely there is an industrial designer somewhere in the ACBL who can improve this.

Okay, I’ll put my high horse back in the stable and go to bed.  Tomorrow is another day.